A factory in Kearny, New Jersey which manufactures chlorine and other disinfectants, suffered a catastrophic fire last night, with local authorities in nearby Jersey City, Hoboken and New York City ordering residents to stay inside and close their windows.  Now, authorities are quietly saying the fire was no accident and are looking at whether Iran or its proxies intended to cause a massive release of Chlorine Gas to murder tens-of-thousands in northern New Jersey and New York City?

Late Friday night, when the blaze broke out at the Alden Leads chemical company on Jacobus Avenue in Kearny, officials from Kearny, Bayonne, Hoboken and Newark all urged residents in their towns to remain inside their homes and to keep their windows closed because huge plumes of smoke were drifting over the region.

Some smoke also drifted over parts of Staten Island in New York.

The large fire at a chlorine chemical plant in Hudson County continues to burn Saturday and although it is under control, authorities have kept the Pulaski Skyway (Truck Routes 1 & 9) closed in both directions and continue to test the air quality to ensure the air is safe to breathe.

During the early-morning hours on Saturday, local residents in several towns and cities were urged to remain indoors because of the potential danger from chemical fumes.

If you are outside and you smell smoke, go back inside,” Kearny Fire Chief Steve Dyl said in an interview with ABC7 in New York at about 7:30 a.m.

Another representative of the Kearny Fire Department said the blaze is under control, but there still are some hot spots burning at the chemical plant. Some local streets remain closed, as of 8:20 a.m., and the Pulaski Skyway remains closed.

As of 10:10 a.m. SaturdayKearny police say it is now safe for residents in their town to open their windows or go outside.

“In Kearny, there’s no air quality issue,” said town police Lt. Charles Smith. “We have a hazmat unit out testing the air.”

Smith said the wind appears to be blowing toward Newark and Jersey City, so officials in those cities will have to determine if the air is safe in that region. As of 10:10 a.m., the Pulaski Skyway remained closed to traffic, along with truck Route 1 and 9 and some local streets in South Kearny, Smith said.

At about 10:40 a.m., a Jersey City police spokeswoman said the air quality in that city is fine.

“Air samples specific to the Greenville, Society Hill and Lincoln Park areas have now been deemed safe,” she said, adding that the Jersey City Fire Department will continue to test the air, and city officials are awaiting information from state officials.

As of 7:45 a.m., both directions of the Pulaski Skyway remained closed. The Skyway, which carries traffic on Routes 1 and 9 between Newark and Jersey City, is located very close to the chemical plant.

So far, there have been no reports of any injuries, and the cause of the fire has not been determined.

Hoboken officials say it is safe for residents of their city to open their windows, because “the air does not pose any sort of health risk.” The air advisory has also been lifted in Bayonne.

Fortunately due to SE winds, smoke and fumes from last night’s in Kearny never made there way to Hoboken. It has been deemed safe to reopen your windows and the air does not pose any sort of health risk. **All city actives remain on schedule.**http://nixle.us/B2438

Update on air conditions due to last night’s fire: Windows can be reopened and all City activities…

Update: Fortunately due to SE winds, smoke and fumes from last night’s chemical plant fire in Kearny never made there way to Hoboken.  It has been deemed safe to reopen your windows and …

Some investigators are now saying it appears that someone intended for the plant to be ruptured, but NOT to go on fire, and their effort failed, causing a major fire instead of a major chemical release.

According to one Investigator, it LOOKS like  whoever perpetrated this focused on the factory instead of the liquid chlorine storage tanks nearby.

That potential mistake saved upwards of a million lives.

As the gas crossed the Hudson River into Manhattan and even into nearby Brooklyn, hundreds-of-thousands more would have been killed as well.

“This would have made the attacks of 9-11 look like  a kid’s game” said one investigator.

“One breath of this would severely burn the lungs of anyone who got a whiff.  The human body’s response to such chemical burns in the lungs would be to flood the lungs with water, thus causing victims to foam at the mouth and ultimately drown on their own body fluids within minutes.”

In fact, anyone who merely walked near the fumes would have found themselves almost instantly BLINDED as the chlorine hit their eyes.   “They’d be instantly blind and choking to death on chlorine.  Bodies would have piled up on the streets” the Investigator continued.

Said another investigator “If this was, in fact, an attempted Terrorist Attack, they screwed up . . . and we lucked  out.“

In addition to Fire Departments from New Jersey responding, a Fire Boat from the New York City Fire Department also played a role is stopping this disaster: 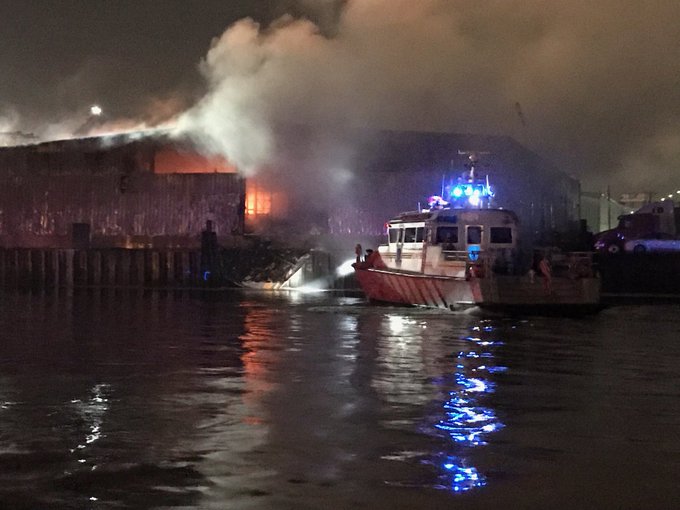 This particular Chlorine plant has long been on a list of industrial locations ripe for Terror attacks.
In 2005, The New York Times did a major story about how many such facilities in the US are vulnerable, and that report (HERE) mentioned this particular plant in New Jersey.

“To have this incident take place at the precise time when tensions between Iran and the United States appear to be boiling over as it relates to Economic Sanctions over the Iran Nuclear Deal, reeks of an Iranian Proxy or Sleeper Cell attempting to carry out a terror attack upon the United States” said a law enforcement official.

Perhaps this incident is why military activity in the Persian Gulf suddenly spiked overnight.

“Perhaps Iran is waiting to be blamed for what has taken place, and they know that once the blame comes, war with the United States absolutely, positively, follows.”

Said one person at the scene today – who overheard this reporter’s questions about possible terrorism – “We’ve dealt with terrorists before; they should have learned . . . . we don’t take kindly to people who try to kill us.  Perhaps it’s time to re-teach that lesson.”

Was this massive fire at a Kearny, NJ chlorine plant an attempted terror attack by Iranian Proxies or a Sleeper Cell? [A False Flag?]

Authorities are not saying.  Yet.

Authorities say a fire at a chemical plant in New Jersey has been brought under control and the Pulaski Skyway has reopened.

Kearny fire officials said the blaze at the Alden Leads chlorine plant in Hudson County was reported Friday night and burned into Saturday. No injuries were immediately reported.

The blaze prompted closure of the skyway, a bridge-causeway between Newark and Jersey City, and emergency responders helped motorists stranded on the bridge. Local roads around the plant were also closed.

The plant makes chlorine tablets that are used in swimming pools.

As of 9 a.m., there was fire department activity on Pulaski Skyway in both directions between US 1&9 Truck Route/Raymond Blvd and Tonnelle Circle. All lanes closed and detoured, the New Jersey Department of Transportation retweeted from the Pulaski Skyway rehab account.

No injuries were reported.

The three-alarm fire occurred at the Alden Leeds Inc. plant in Kearny, just minutes away from Newark. Some rivers were said to be overcome by fumes, according to authorities. The Office of Emergency Management in nearby Bayonne instructed residents to close their windows due to smoke.

Fire sources told PIX11 there were multiple explosions inside the building. A source told PIX11 that odors were strong in surrounding neighborhoods, and that lots of calls were coming in about the fumes.

Kearny is about 15 miles outside New York City. New York’s Office of Emergency Management also warned residents about the smoke.

As of 6:45 a.m. Saturday, the Department of Environmental Protection advised that air quality levels are well within an acceptable range for the area.

By around 5:30 p.m., all roads in the area — including the Pulaski Skyway — had reopened.