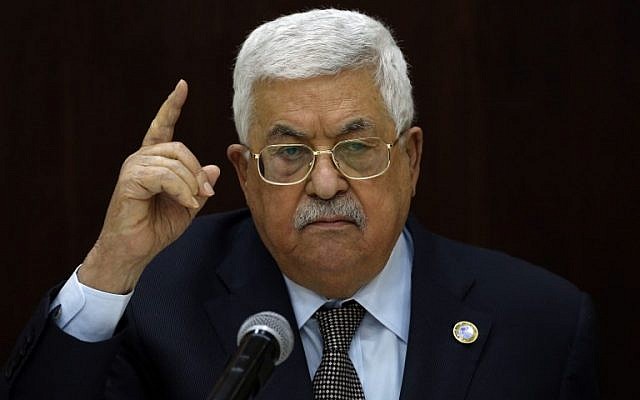 President Mahmoud Abbas speaks to Palestinian leaders at the Muqata, the PA headquarters, in the West Bank city of Ramallah, on February 20, 2019. (ABBAS MOMANI / AFP)

Palestinian Authority President Mahmoud Abbas personally commented Monday for the first time on the US-hosted economic conference planned to be held next month in Bahrain, saying that it will “go to hell.”

The White House announced Sunday it would co-host the June 25-26 meeting in the capital city of Manama and is expected to unveil the economic aspects of its long-awaited Middle East peace plan, with the declared aim of achieving Palestinian prosperity.

“The Palestinian Authority does not recognize this conference,” Abbas said at a Ramallah event.

“Trump’s ‘deal of the century’ will go to hell, as will the economic workshop in Bahrain that the Americans intend to hold and present illusions,” he continued.

“Whoever is interested in proposing a solution to the Palestinian issue should begin with a diplomatic solution.” [Not an Economic solution] 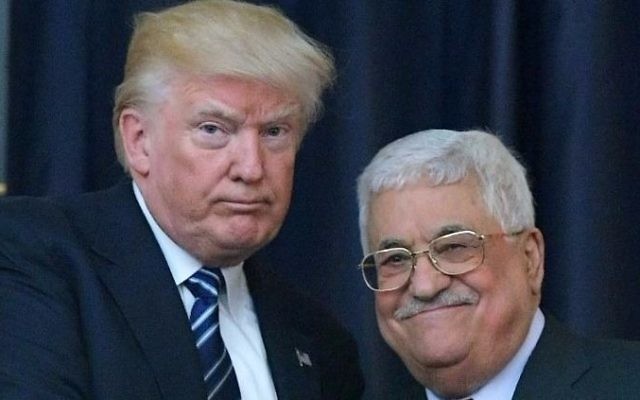 US President Donald Trump, left, and Palestinian leader Mahmoud Abbas pose for a photograph during a joint press conference at the presidential palace in Bethlehem on May 23, 2017. (AFP/Mandel Ngan)

Trump’s White House responded with a series of punitive measures, including severing assistance to the PA and defunding the United Nations Relief and Works Agency for Palestine Refugees (UNRWA).

Last Wednesday, the PA formally rejected an invitation to the June conference.

“This is an official announcement that Palestine will not attend the Manama meeting,” the PA’s top negotiator Saeb Erekat said in a statement. “This is a collective Palestinian position, from President Mahmoud Abbas and the PLO Executive Committee to all Palestinian political movements and factions, national figures, private sector and civil society.”

“The conference will surely fail without Palestinian participation,” Erekat said in a separate statement on Saturday.

He said countries should not pay their debts to Washington “at the expense of the Palestinian people,” and urged them to reconsider their stances.

Erekat called the Trump administration “a cornerstone of the extreme right-wing Israeli ideology,” charging that the US was “sowing fear in the region.”

Bahrain’s foreign minister, Khalid bin Ahmed Al-Khalifa, has said the conference “serves no other purpose” than to help the Palestinian people “through developing their abilities and enhancing their resources.”

The kingdom “remains supportive of the brotherly Palestinian people in restoring their legitimate rights on their land as well as establishing an independent state with East Jerusalem as its capital,” Bahrain’s top diplomat said in a statement last Wednesday.

So far the only Palestinian businessman to have said he may attend the summit is Ashraf Jabari, a Hebron industrialist who has close ties to the Trump administration and Israeli settlers and is largely seen as outside the Palestinian mainstream.

The United Arab Emirates and Saudi Arabia have also said they will send delegations to the event. Israel’s Finance Minister Moshe Kahlon also intends to attend. 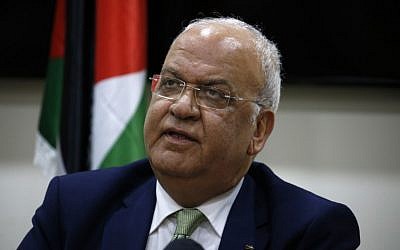 Both countries are said to have pressured the PA to accept the invitation.

According to the Jerusalem Post, Saudi Arabia, Egypt and the UAE expressed “concern” over Palestinian opposition to the workshop.

“The Arabs say we should have consulted with them before publicly rejecting the workshop and calling for its boycott,” the Post quoted one Ramallah official as saying. “They are actually pressuring us to stop speaking out against the Bahrain conference and to allow businessmen to go there.”

PA Prime Minister Mohammad Shtayyeh slammed the notion of “economic peace,” said to be a cornerstone of Trump’s peace plan.

“Any solution to the conflict in Palestine must be political … and based on ending the occupation,” he said. “The current financial crisis is a result of a financial war waged against us and we will not succumb to blackmailing and extortion and will not trade our national rights for money.”

Ahmed Majdalani, the social development minister and a member of the Palestine Liberation Organization’s executive committee, reiterated Shtayyeh’s comments, saying: “There will be no Palestinian participation in the Manama workshop.”

“Any Palestinian who would take part would be nothing but a collaborator for the Americans and Israel,” Majdalani said.

The only Palestinian currently set to attend the workshop is Ashraf Jabari, a Hebron businessman with ties to settlers who received a personal invitation from the Trump administration.

Greenblatt responded by saying that it is “difficult to understand why the Palestinian Authority would reject a workshop designed to discuss a vision with the potential to radically transform lives and put people on a path toward a brighter future.”

Bahrain’s foreign minister, Khalid bin Ahmed Al-Khalifa, said last week the conference “serves no other purpose” than to help the Palestinian people “through developing their abilities and enhancing their resources.”

He reiterated his country’s support for establishing a Palestinian state with east Jerusalem as the capital.