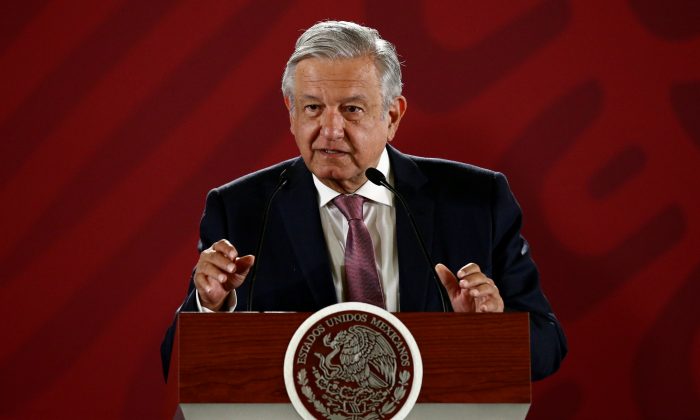 Mexican President Andres Manuel López Obrador has responded to President Donald Trump in a letter on May 30 after Trump imposed a tariff on Mexico to curb the heavy flow of illegal aliens at the southwest border.

On late May 30, Trump announced that the United States will impose a 5 percent tariff on all goods coming from Mexico from June 10, which will gradually increase “until the illegal immigration problem is remedied.”

“On June 10th, the United States will impose a 5 percent Tariff on all goods coming into our Country from Mexico, until such time as illegal migrants coming through Mexico, and into our Country, STOP,” Trump said on Twitter. “The Tariff will gradually increase until the Illegal Immigration problem is remedied, at which time the Tariffs will be removed. Details from the White House to follow.

On June 10th, the United States will impose a 5% Tariff on all goods coming into our Country from Mexico, until such time as illegal migrants coming through Mexico, and into our Country, STOP. The Tariff will gradually increase until the Illegal Immigration problem is remedied,..

….at which time the Tariffs will be removed. Details from the White House to follow.

In his letter (pdf) translated by the Wall Street Journal, the socialist leader pushed back at Trump’s announcement, accusing him of transforming the United States from “a country of fraternity for the world’s migrants into a ghetto.”

He also attacked Trump’s “America First” slogan, calling it a fallacy as they should be seeking instead the socialist principles of “universal justice and fraternity.”

Obrador then proposed to “deepen the dialogue” instead of using “taxes or coercive measures” to resolve the illegal immigration issue, which has overwhelmed the immigration system at the U.S.-Mexico border.

“It is worth remembering that, within a short period of time, Mexicans will not need to migrate into the United States and that migration will become optional, not compulsory. This is because we are fighting corruption, the main problem in Mexico, as never before!” Obrador said as he tried to convince Trump to “seek alternatives to the immigration problem.”

He added that the Secretary of Foreign Affairs of Mexico is leading a delegation to Washington to discuss with the Trump administration in order to seek “an agreement for the benefit of the two nations.”

In an official White House statement, Trump said Mexico had only passively cooperated with the United States on the issue of illegal immigration, an attitude that is viewed as an “emergency and extraordinary threat to the national security and economy of the United States.”

“Mexico has very strong immigration laws and could easily halt the illegal flow of migrants, including by returning them to their home countries. Additionally, Mexico could quickly and easily stop illegal aliens from coming through its southern border with Guatemala,” Trump said in his statement.

Later in the statement, the president said: “Mexico has allowed this situation to go on for many years, growing only worse with the passage of time.”

“From a safety, national security, military, economic, and humanitarian standpoint, we cannot allow this grave disaster to continue,” he added.

“Mexico must step up and help solve this problem. We welcome people who come to the United States legally, but we cannot allow our laws to be broken and our borders to be violated. For years, Mexico has not treated us fairly—but we are now asserting our rights as a sovereign Nation.”

During the first seven months of the 2019 fiscal year, 531,711 illegal aliens have crossed the border into the United States, according to data from the Customs and Border Protection.