As Lady Gaga took to the stage at the Apollo Theater on Monday night, she had two questions for her audience.

“Are you ready to f#@*%g party tonight? Are we making history?”

The show did make history, at least for Gaga, as it was her first appearance at the famed theater in Harlem. As for the first question, her fans — who she calls her “Little Monsters” — were definitely ready to go nuts to catch the 33-year-old megatalent.

“So excited to see her and celebrate Pride,” former “Saturday Night Live” and “Parks and Recreation” star Amy Poehler told the Daily News before entering the theater. “I saw her in Vegas and loved it. Love ‘Born This Way.’ ”

Poehler wasn’t the only heavy hitter in the crowd.

This is the most deplorable thing yet, the Osteens willfully chose to attend an event celebrating a major LGBTQ “gay” pride event…

As Don Boys reported, It must be said so I will say it. Joel Osteen is a heretic as are many other “soft” Evangelicals who have departed from the faith. I am careful about “attacking” preachers since others are quick to do that, and usually the criticism is not valid. However, enough is enough.

Joel and his wife fit the description of a heretic as being “a professed believer who maintains religious opinions contrary to those accepted by his or her church or rejects doctrines prescribed by that church.”

On October 2, 2013, Osteen did a HuffPost Live interview with Josh Zepps where Joel refused to take a biblical position on sodomy. Of course, neither he nor Zepps would ever use that very correct English word.

Zepps quoted from Joel’s book saying, “It doesn’t matter who likes you or doesn’t like you, all that matters is that God likes you. He accepts you, he approves of you.” Zepps then asked if that included homosexuals.

The pastor replied, “Absolutely, I believe that God breathed life into every person and that every person is made in the image of God and you have (sic) accept them as they are, on their journey. I’m not here to preach hate or push people down.” Joel stated. “I’m not here to tell everybody what they’re doing wrong.” If a preacher is not supposed to reveal and explain Bible truths about personal salvation and how to live the Christian life in obedience to God, then why is he preaching? Could it be power, and prestige, and possessions that motivate him? If so, that would make Joel carnal, crass, and commercial.

Of course, the clear implication is those of us who take a biblical position are haters when in reality we are the lovers! If I warn people that smoking, boozing, gaining weight and using illegal drugs will destroy their health and shorten their lives then I am their friend because I told them the truth that, if obeyed, will save their lives. Similarly, since the chosen homosexual lifestyle will shorten a person’s life, fill him with guilt, produce self-loathing leading to thoughts of suicide, saying so makes me a considerate, concerned, compassionate person—not the hater suggested by the media who grovel at the feet of the LGBTQ crowd. 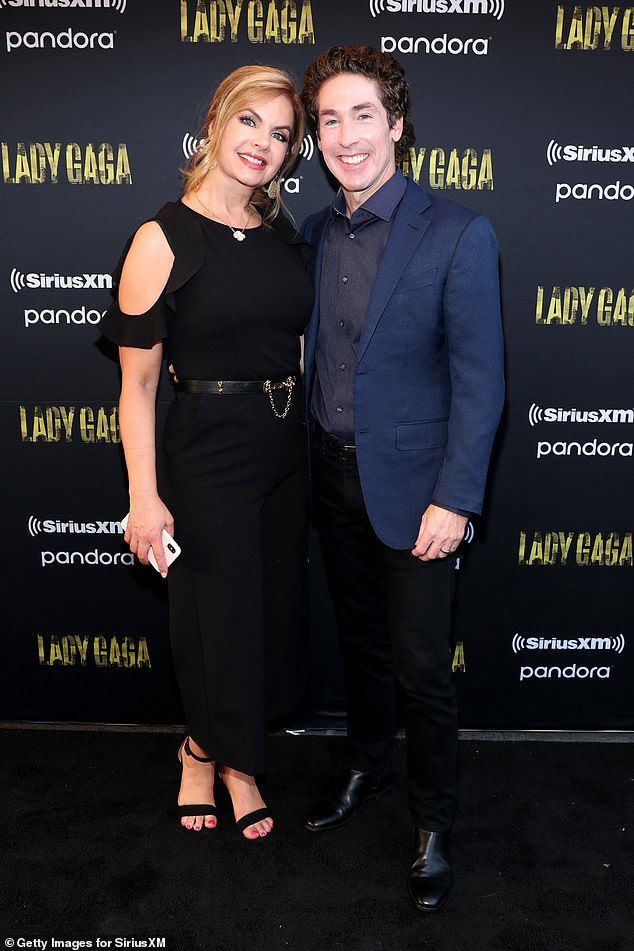 Osteen’s presence was curious, because Gaga has championed LGBTQ causes.

Lady Gaga is known for her risque performances and lack of modest attire.

Joel Osteen is a charlatan who has been given over to the lusts of this world, it comes as no surprise that he and his wife, Victoria, would immerse themselves in the culture of demonic influence, sex, and greed. It was reported that Osteen was wearing a blue blazer while his wife was wearing a long, black dress.

For the former NYU-dropout, it was all about being back to her roots: The gays made Gaga. Gaga gave back to the gays. The gays gagged. Gaga is their goddess.

The clearly LGBTQ-leaning-and-loving crowd went crazy after one of their most extravagant took time to acknowledge the 50th anniversary of the Stonewall Riots.

During the most emotional part of the show, playing the piano by herself, Gaga explained that the fight for equal rights started “when our community said ‘enough is enough’. And she celebrated the bravery and courage of one of the early gay rights leader Marsha P. Johnson, a tragically underappreciated hero.

The moment was reminiscent of one of her first acceptance speeches, when in 2009 she gave thanks “to God and the gays,” sending the LGBTQ community a sign of what was to come.“

“World Pride should exist 365 days a year,” she declared.

As a nod to the transgender community, she told the audience to pay attention to people’s pronouns, as “we are all in this together.”

Among those in the crowd were Jamie Smith and Courtney Connors, who run a blog called Drag Coven. They said they have seen Lady Gaga on all her concert tours.

“I like her because of the way her music makes you feel,” Smith said. “She’s genuinely a good person who makes you feel good, even though she’s very famous.”

The show celebrated a new partnership between music streaming giants SiriusXM and Pandora, and tickets were not available to the general public. Smith and Connors got theirs through a crew member, and the celebrities scored the ducats by being stars.

New Yorkers Dani Jacobson and Amanda Miller both had ins through their jobs. Jacobson works at a talent agency and Miller at a record company.

“She makes music for music, not for anything else,” Miller said.

The near-two-hour spectacle was made up of mini-sets with some of her greatest hits, peppered with some Dire Straits-inspired instrumental interludes. 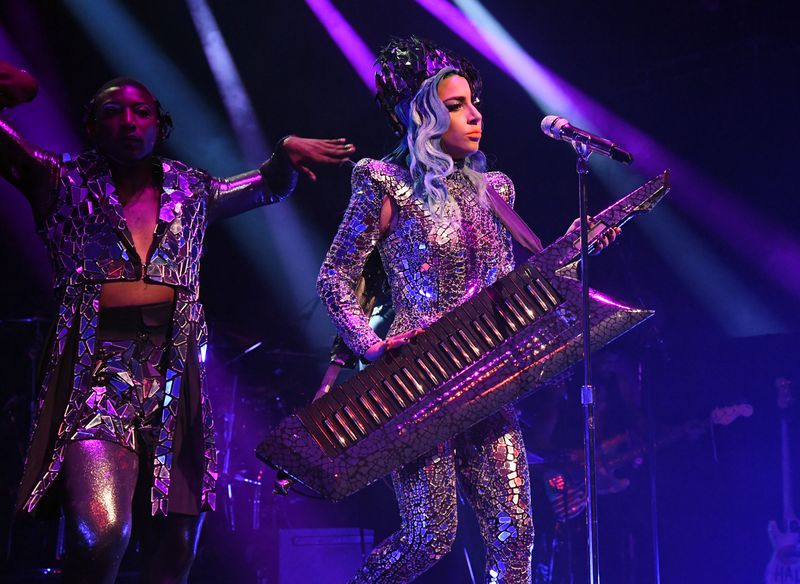 Gaga performed a selection of her most beloved hits dancing around, in a most homoerotic latex fantasy, dropping F-bombs and getting tips from the future by speaking to an “Avatar”-like Gaga figure. (“My enigma is my wisdom, my gut, my inner voice.”)

And her inner voice was telling her to Just Dance. And to “Celebrate your freedom.“

Mother Monster was at home, and the energy in the room was contagious. 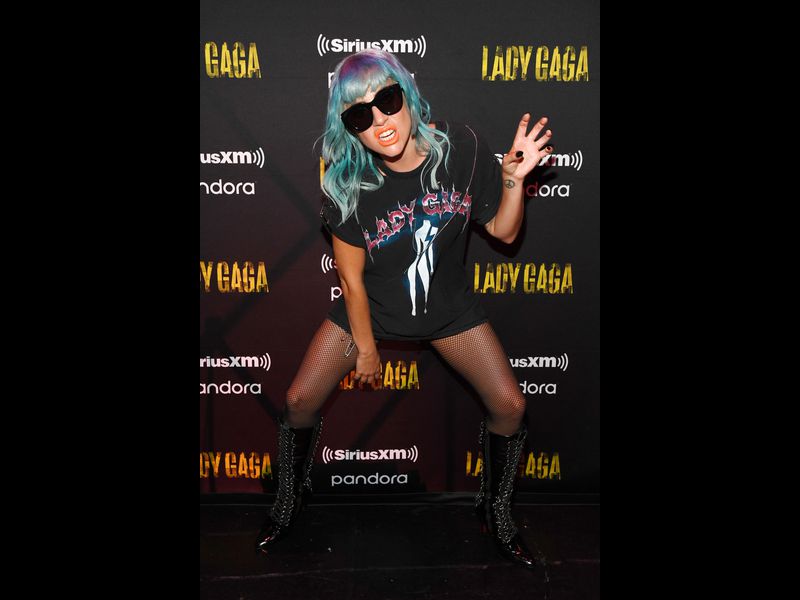 Lady Gaga arrives for her performance at The Apollo in New York City on Monday, June 24, 2019. (Kevin Mazur / Getty Images for SiriusXM)

I wonder if the famous preacher and his wife were uncomfortable as a dog in hot ashes with such depravity or if they have grown numb to such debauchery.

What were decent people doing in such an event? What were a leading Evangelical pastor and his wife doing there? Why did he not stand on his chair and call them all to repentance as an Old Testament prophet would have done? As the Apostle Paul would have done?

What were a leading Evangelical pastor and his wife doing there? Why did he not stand on his chair and call them all to repentance as an Old Testament prophet would have done? As the Apostle Paul would have done?

Jude reminds Joel and all preachers to “contend for the faith which was once delivered unto the saints.” Titus 5:20 commands preachers,  “Them that sin rebuke before all, that others also may fear.” Titus 1:13 requires us, “Wherefore rebuke them sharply, that they may be sound in the faith.” In II Tim. 4:2 we are told to “Preach the word; be instant in season, out of season; reprove, rebuke, exhort with all longsuffering and doctrine.”

Joel and Victoria were out of place at the LGBTQ event, and they are out of place in the pulpit. Joel Osteen should be denounced as a false teacher, and a false prophet!

I wonder if Hillsong will associate with him or have him back at one of their conferences, now that he has crossed over the ‘pink line’?

Joel will not reconsider, repent, and return to his religious roots because the price is too great for him to admit error when that admission would dissolve his salary, status, and security.

Ephesians 4:19
Having lost all sense of shame, they have given themselves over to sensuality for the practice of every kind of impurity, with a craving for more.