It might sound like an uncanny question given that our military was likely created exclusively to defend our own borders, but, according to one Homeland Security official I spoke to, the White House is still convinced that our own military cannot be used for what one would think of as the quintessential purpose of its existence.

“Despite the fact that a more aggressive and armed military posture at the border is purely repelling incursions from the cartels and has nothing to do with Posse Comitatus limitations on enforcing interior domestic law, the administration lawyers refuse to view it that way,” said a DHS attorney who spoke on condition of anonymity because he is not authorized to speak to the media.

Indeed, despite the president’s promise to send “ARMED” soldiers to the border following the incident where two active duty soldiers were briefly disarmed and detained by Mexican military (or cartel operatives) on April 13, nothing has changed for the roughly 2,800 active duty personnel at the border.

That is clearly the guidance the political leaders in Washington are issuing because they continue to treat cartel smuggling of dangerous criminal aliens and gangs – and even espionage and human intel gathering operationsagainst our border – as a domestic law enforcement issue rather than a national defense issue.

One Border Patrol agent in the hard-hit Rio Grande Valley, who himself has an extensive military background, told CR that while his colleagues appreciate the Defense Department’s help, they really need the military to actually hold the line against the cartels. “We are outmanned, outgunned, and outmaneuvered, and the cartels have better technology than we do,” said the agent who spoke on condition of anonymity because he lacks an outlet to convey the perspective of line agents.

“The cartels are also much smarter than people give them credit for. They know that the military has been given orders only to alert Border Patrol of incursions rather than deterring and pushing them back across the river. As such, they will literally cross in rafts right in front of the military vehicles, often armed with weapons, knowing they won’t touch them and knowing that our agents are so tied down with their strategic weaponization of family units that it will take too long for us to arrive at the scene.”

Not only has the military not been unleashed to secure the perimeter of the river just like we would do for the security of other countries, they are often placed in danger themselves. In addition to the incident in Clint, Texaswhere two Mexicans snuck up on two active duty soldiers and jumped them, a Marine was attacked in El Centro California in May while sitting in one of these blacked out Mobile Surveillance Camera vehicles. The military has declined to comment any further on that incident since the initial media reports and have never issued an official statement.

The rest of the military’s mission appears to be humanitarian in nature, which unfortunately, plays into the hands of the cartels by more effectively completing their criminal conspiracy rather than deterring them. The NORTHCOM spokesman told CR that “the Joint Forces Land Component Command maintains a Crisis Response Force, consisting of military police, medical, aviation, and engineering support.” They also “provide high capacity transportation drivers to assist CBP with migrant transport to detention facilities and personnel to distribute meals to and conduct welfare checks on migrants in immigration detention facilities.”

Ironically, one could easily argue that having the military engage in migrant care is much more of a law enforcement and domestic policy function than the quintessential military function of defending the actual border line in the river by remaining “forward engaged against the armed smugglers and cartels,” according to my source in the Border Patrol who spent many years in the military on forward engaged missions overseas.

“It is shocking how when the Gulf Cartel and Cartel del Noreste engage in battle, the losing side always comes across the border to escape and our government doesn’t deploy any assets to stop them. Weapons and cartel commandos flow back and forth constantly, yet DHS and DOD refuse to view this as a gray zone conflict the way we would in the military in any other part of the world. Ironically, yet tragically, when cartel gun battles erupt is precisely the time when we need the military to be forward engaged to intercept the cross-border flow of fighters and weapons because we as line agents are ordered to get out of the way. Our border is left defenseless.”

The funny thing is that the lawyers in the executive branch believe the military can’t perform the Border Patrol’s job, yet Border Patrol doesn’t perform a hold the line strategy anyway because that is viewed as too dangerous for them!

So who is executing a military mission? Not Border Patrol and not the military

In another twist of irony, the only personnel who consistently have held the line when there was enough funding are the Texas Rangers. Jaeson Jones, former captain of the Texas Rangers’ Border Security Operations Center, is dumfounded that the federal government won’t patrol the international border the way his state troopers did beginning under Gov. Rick Perry.

“The military pilots need to get in their hours anyway,” Jones said. “They could kill two birds with one stone, by getting their training and hours on the border, while also being used as a fixed deterrent against the cartels. Before the wave of lawfare, our efforts at Texas DPS were very successful in deterring the incursions and the military has exponentially more resources than we had.”

Jones, who recently took a trip to the border, posted a series of videos on his Twitter account of smugglers successfully delivering their package and returning before Border Patrol could get them. According to Jones, some of these incursions were called in by the military, but because the military doesn’t deter and defend, the cartels slip in right in front of them. 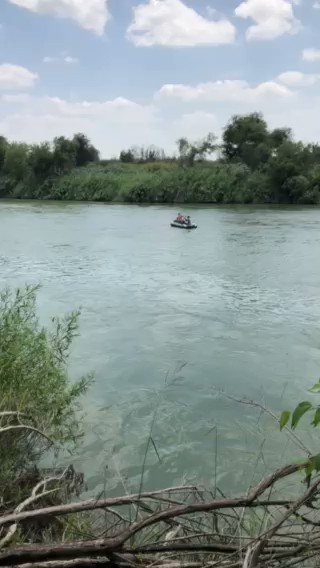 TRIPWIRES & TRIGGERS-VIDEO-The first wave of Gulf Cartel rafts began arriving early in south Texas this morning. This group was able to make it into Texas without being apprehended. The lone Border Patrol agent arrived in time to watch the raft return to Mexico.

Notice the smuggler is waving his load on. They will not operate if Border Patrol is in the river because they don’t want to get caught along with the illegal immigrant families. They don’t fear the military, but according to our source who is a line agent in the region, that would all change if the military were allowed to deter them.

“There’s nothing more effective than boats and helicopters. If the military would augment our resources in the river and the air, the cartels would be forced to shut down their operation and go back to just drug smuggling at ports of entry. But as it stands now, they know that the responding agents are far enough away to respond. There have been so many times recently when we can’t even respond when the Army calls out a group of runners. There are so few of us on the line that we have to prioritize which groups we pursue. Then there is the safety concern because we are dealing with cartels who are no less powerful and violent than ISIS.”

Yet, NORTHCOM confirmed with me that they do not operate in the Rio Grande River. My source in Border Patrol noted that when Border Patrol is able to deploy their boats, they are very effective, but it’s not constant enough, and “due to poor scheduling of personnel shifts, there are often four consecutive days without boats in the water in our area of operation. A permanent military presence would be a game changer.”

If not for our own homeland defense, then for what?

This dynamic could not be further from the authentic application of the 1878 Posse Comitatus Act. The law was signed by President Grant to prohibit the military from being used to enforce domestic Reconstruction-era laws against American citizens in the southern states, absent direct authorization from Congress. To repel an invasion at our border — any invasion — is actually the quintessential use of our military that our Founders had in mind. Article IV, Section 4 of the Constitution tasks the federal government with guaranteeing states’ protection against invasion, and we owe it to Arizona and Texas to secure their territory. The existence of Article IV, Section 4 itself should qualify as the exception to the prohibition of military enforcement expressed in Posse Comitatus — “except in cases and under circumstances expressly authorized by the Constitution.

The president would go a long way in changing the outlook of the border from a domestic issue to a national defense issue if he were to designate the cartels as terrorists. Yet, multiple officials in the administration and in Congress have told me the State Department and most people in the White House are dead-set against it.

Next week, we will celebrate the 243rd anniversary of the signing of the Declaration of Independence. One of the indictments against King George expressed in that document was how he “endeavoured to bring on the inhabitants of our frontiers” and refused to allow the Colonists to defend against the Indian incursions. Who would have thought that years later, the experiment in self-governance would result in our own refusal to do so without the absolute rule of a king?

Want to keep up with what’s going on in Washington without the liberal media slant, establishment spin, and politician-ese?