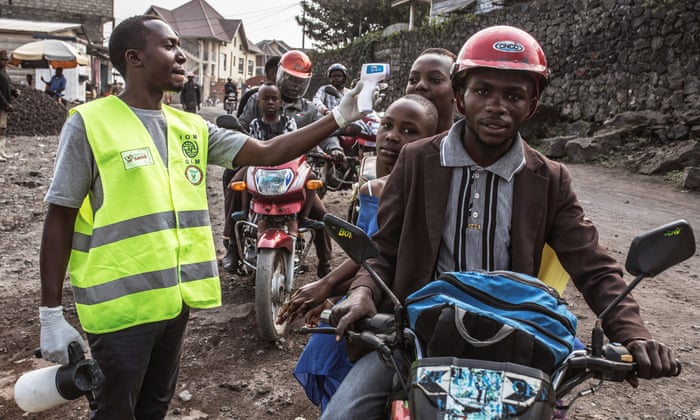 The Ebola outbreak in the Democratic Republic of the Congo has spread to the city of Goma, a major transportation hub along the Rwandan border that’s home to more than two million people.

The confirmed Ebola case in Goma was announced late Sunday by the Democratic Republic of the Congo’s health ministry. The patient, a 46-year-old pastor from South Kivu province, was admitted to an Ebola treatment center in Goma, but then transferred to one in Butembo on Monday morning, according to a statement from the health ministry.

It’s the first Ebola case to be confirmed in Goma since the ongoing outbreak began nearly a year ago. The city, located on the nation’s eastern border with Rwanda, is the bustling capital of North Kivu province, one of the two affected provinces in the epidemic. It receives a large number of travelers from across the country and the greater region.

The World Health Organization, the global health arm of the United Nations, has decided three times not to declare the current outbreak a public health emergency of international concern, which would mobilize more resources and command global attention.

However, the WHO’s director-general, Dr. Tedros Adhanom Ghebreyesus, said the identification of a confirmed case in Goma “could potentially be a game-changer in the epidemic” and he would reconvene the emergency committee as soon as possible to reassess the situation.

“Just when we start to get control of the virus in one area, it appears in another,” Ghebreyesus said at a press conference Monday at the United Nations office in Geneva.

The pastor traveled from Bukavu, the capital of South Kivu province, to Butembo, a city in North Kivu province, on July 4 for an evangelical mission, passing through Goma on the way. While in Butembo, which is a major hot spot in the Ebola outbreak, the pastor delivered sermons at seven churches where he laid his hands on worshippers, including those who were sick, according to the country’s health ministry.

The pastor (Priest} began showing signs of illness on July 9 when he was still in Butembo. He was cared for by a nurse until he left by bus for Goma on Friday. The bus went through three health checkpoints en route to Goma, during which the pastor did not appear to show symptoms of Ebola. He gave different names at each checkpoint, possibly “indicating his desire to hide his identity and state of health,” the health ministry said in a statement.

Upon arriving in Goma on Sunday morning, the pastor checked into a health center, feeling ill with a fever. No other patients were in the health center at the time, according to the health ministry.

The health center staff recognized the symptoms of Ebola and immediately alerted the response teams in Goma, who transferred the pastor to the city’s Ebola treatment center. A laboratory test came back positive Sunday afternoon, according to the health ministry.

The priest who became infected during a visit to the town of Butembo, one of the epicentres of the outbreak, before taking a bus to Goma, Congolese officials have said.

He was being driven from Goma to a clinic in Butembo on Monday to receive treatment when he died, North Kivu province’s governor, Carly Nzanzu, said.

The World Health Organization said on Monday health officials had identified 60 people who had come into contact with the pastor since he was taken ill and half of them had been vaccinated.

Goma, more than 220 miles south of where the Ebola outbreak was first detected a year ago, is the largest city to be affected by the outbreak. Many of the region’s usable roads pass through Goma and it is a focus of air and water transport.

A total of 2,489 people have reported symptoms of hemorrhagic fever in the Democratic Republic of the Congo’s northeastern provinces of North Kivu and Ituri since ‪Aug. 1, 2018. Among those cases, 2,395 have tested positive for Ebola virus disease, which causes an often-fatal type of hemorrhagic fever, according to the latest bulletin from the country’s health ministry.

The current outbreak has a case fatality rate of about 67%.

There have been 1,665 deaths so far, including 1,571 people who died from confirmed cases of Ebola. The other deaths are from probable cases, according to the health ministry.

Ebola has been around Africa for a long time and in Africa is where it should stay.   I think it is prudent for advanced civilizations like America, to impose immediate TRAVEL BANS to and from the Congo.

I also think that anyone who CHOOSES to go to countries where this virus is spreading, should be made to understand they will face QUARANTINE and MONITORING once they return.

As a nation, we have a right to protect ourselves from a COMMUNICABLE (Contagious) disease that kills 67% of the people it infects.

Our right to protect ourselves is superior to the right of folks to travel (by choice) to and from such infected areas.