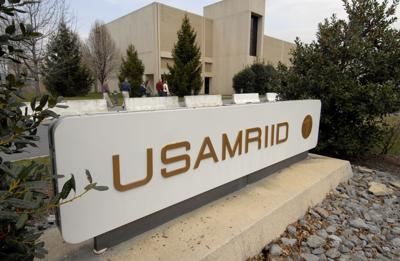 The US government has shut down all research at the nation’s top biological warfare lab amid fears deadly microbes could leak into the water supply.

But last month US health officials from the Centers for Disease Control and Prevention sent a cease-and-desist order citing concerns that the lab does not have ‘sufficient systems in place to decontaminate wastewater.’

Caree Vander Linden, spokesperson for the center, said research is ‘on hold’ and may be suspended for months.

It comes just weeks after uproar over a new book on Lyme disease, Bitten, which suggested the tick-borne illness, now plaguing the US, was unwittingly unleashed on Americans by biological warfare researchers at Fort Detrick decades ago. 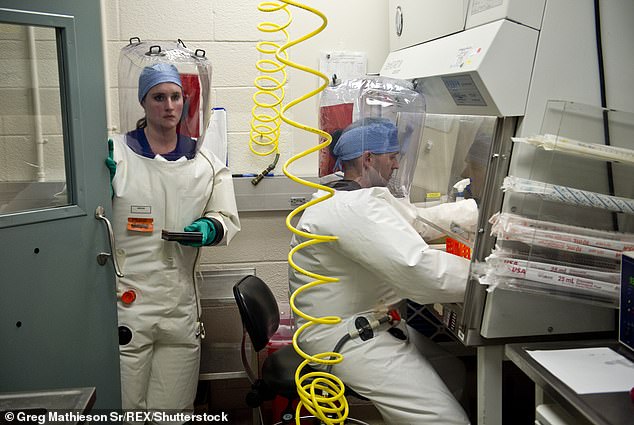 Fort Detrick was one of just a few places in the US approved to study Ebola amid the fresh outbreak in sub-Saharan Africa (pictured: file image of researchers working at Fort Detrick in 2014)

The cease-and-desist notice automatically terminated the center’s registration with the Federal Select Agent Program, which grants special permission for the study and possession disease-causing materials.

In order to get re-approved, the center will have to improve its decontamination processes.

Regulators also took issue with the lack of periodic re-training of staff who are handling the dangerous bacteria.

According to the local paper, the Frederick News Post, which first reported the cease-and-desist notice, Fort Detrick has been struggling to improve its decontamination processes since a flooding issue in May last year.

Fort Detrick was one of just a few places in the US approved to study Ebola amid the fresh outbreak in sub-Saharan Africa.

Ebola, Yersinia pestis and tularemia are all classed as Tier 1 Agents, meaning they pose a severe threat to the public.

Yersinia pestis, more commonly known as the plague, was the cause of some of the world’s deadliest pandemics, including the Justinian Plague, the Black Death, and the major epidemics that swept through China in the late 1800s.

The disease continues to affect populations around the world today.

Tularemia is a rare infectious disease that can infect animals and people, and can be transmitted by ticks. Rates of infection are on the rise, as with all tick-borne illnesses.