It has been reported by Geoffrey Grider and Pulpit and Pen that Hillsong Church will be holding their 2019 Christmas show at the Mayan Theater in Los Angeles. The Mayan Theater is a nightclub in downtown Los Angeles and was built in 1927. In keeping with the Mayan theme, the facility boasts wall decorations, sculptures, and statues that include depictions of pagan priests sacrificing children.

What can I say about Hillsong Church that we haven’t already covered? Perhaps we could talk about how Hillsong was started by pedophile Frank Houston whose son, Brian Houston, covered up for his father and tried to hide his vile crimes against children. We could discuss how Hillsong Church has affirmed a pro-LGBTQ+ position, and featured a Catholic Mass at last year’s Alpha Conference. Or, we could talk about their upcoming 2019 Christmas show they are planning on hold in a place called the Mayan Theater whose walls are adorned with depictions of child sacrifice to Molech.

“And they built the high places of Baal, which are in the valley of the son of Hinnom, to cause their sons and their daughters to pass through the fire unto Molech; which I commanded them not, neither came it into my mind, that they should do this abomination, to cause Judah to sin.” Jeremiah 32:25 (KJV)

FROM PULPIT & PEN: A concerned reader who recently attended Hillsong Church for the sake of evangelism has reported that they are now beginning to meet periodically for worship at the Mayan Theater in Los Angeles, moving from the Belasco Theater. The service was moved to the Mayan Theater the Sunday prior to Halloween and is again scheduled at the theater for their always controversial Christmas special.

But this year, they’re throwing in some child sacrifice decorations for the festive occasion.

The Mayan Theater is a nightclub in downtown Los Angeles and was built in 1927. In keeping with the Mayan theme, the facility boasts wall decorations, sculptures, and statues that include depictions of pagan priests sacrificing children. 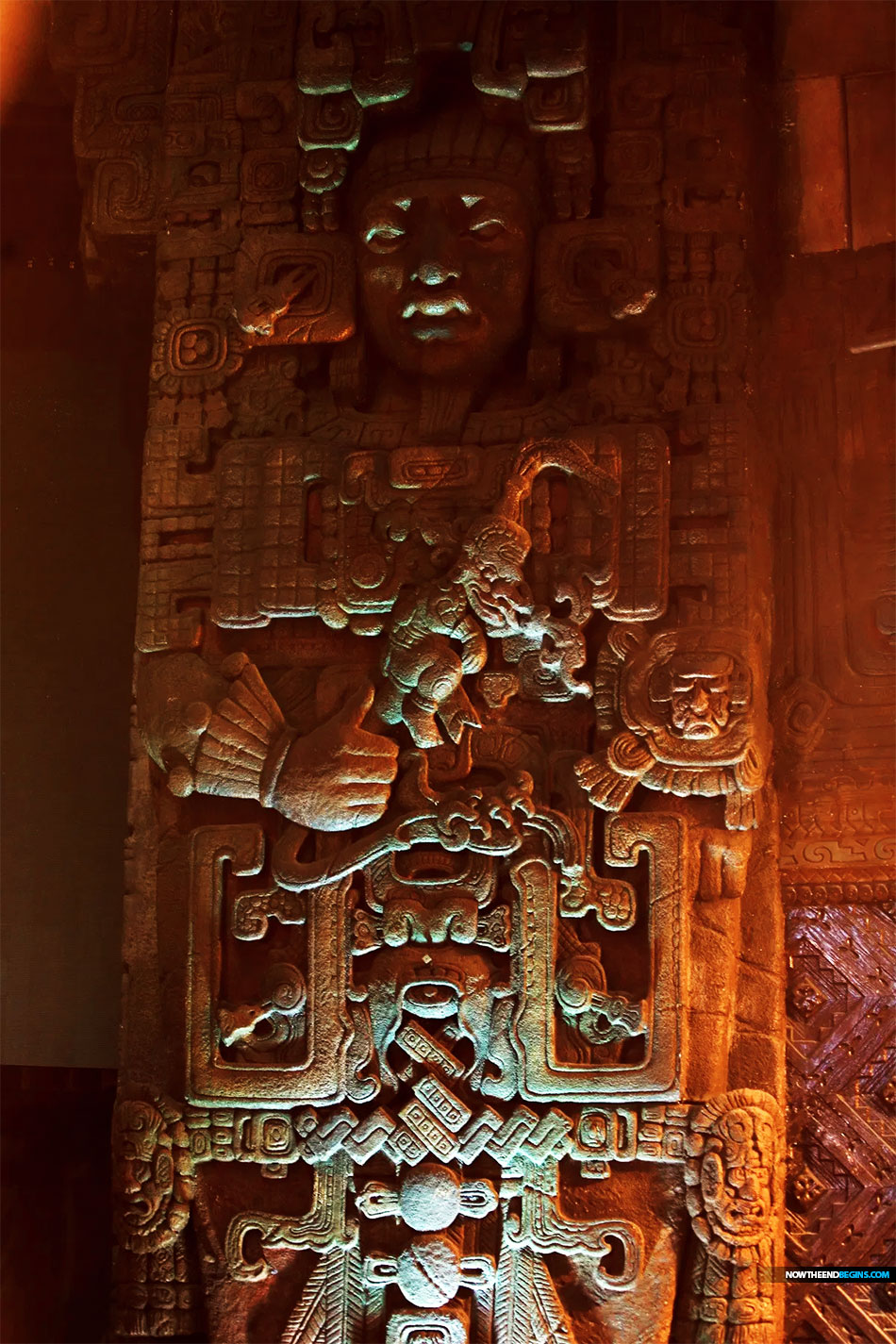 This is one such example of a pagan Mayan god accepting the sacrifice of a human child, skewered on a stick, which lines the walls of the facility. This is the place where Hillsong Church is having their Christmas show.

The Mayan Theater is full of pagan imagery and the sacrifices for which the Mayans were characteristically known.

The facility is designed as an eye-catching, mesmerizing experience. Most evenings, the facility is turned into a nightclub where the most unspeakable acts of debauchery take place. It is fitting that Hillsong would worship in such an environment and among their gods of the flesh.

The facility is designed as an eye-catching, mesmerizing experience.

Most evenings, the facility is turned into a nightclub where the most unspeakable acts of debauchery take place.

It is fitting that Hillsong would worship in such an environment and among their gods of the flesh.

Whenever I come across stories like this, I always try to put myself in the mind of the people who do these sort of things. It’s good to bring the church out into the world, and let your light so shine before men and all  that, I get it. D.L. Moody held Sunday School for orphans in an active bar on Sunday mornings when it was closed. I get it. But when Moody did it, he preached against the liquor business, he didn’t join them. But remember, Moody held his Sunday School in a bar because no other place would give him space, Moody was broke and had no money. He had to use what was offered to him. Hillsong Church is a multimillion dollar corporation who could hold their services literally anywhere.

So why hold services at the Mayan Theater?

Holding church services in a theater built to honor pagans who sacrificed children, when they could afford to do it anywhere, shows you where the heart of Hillsong Church is. It’s firmly on the glitz and glamour of the world, something which born again Christians are told to turn away from. It would be one thing if Hillsong Church was going there to preach again the pagan culture of the Mayans, but they’re not. They’re going there to join them.

They’re going there to sing and dance in a pagan temple in front of imagery of child sacrifice to Molech. Every year I ask myself if Hillsong Church could possibly get worse and somehow sink even lower. And every year they do.

I agree with the sentiments of Geoffrey Grider and Pulpit and Pen, however the Christmas event  they are referring to was held in the Mayan Theatre 2 years ago back in 2017 as shown from the below screen shot!

Here is the link and it clearly shows the date of 2017?

I cannot find any reference to this year 2019 for Hillsong LA and a planned Christmas production?

As I wrote in my book Hellsong The Music of Hillsong

Right in the heart of entertainment central, The Belasco is a multipurpose event and entertainment venue. Opening in 1904, this historical landmark of the 1920s, completed in 1926, was renamed the Follies and became a popular burlesque destination. Its opening night in 1926 featured the play “Gentlemen Prefer Blondes”.

The Belasco has made a comeback in 2011 and is now one of the city’s premier multi-purpose complex, with a long and rich history serving as a theatre, burlesque venue, church, and filming location.2Located in downtown Los Angeles, the Belasco is the new home of Ben Houston and the leadership team from Hillsong, otherwise[1] known as Hillsong LA. They have been renting the space since May 2014. The first service was on the 11th.1*

The theatre houses the Belasco Nightclub, Bar, Lounge and Vintage 10 Fifty Wine Bar. The theatre has sophisticated lighting and sound equipment, a venue with a vast event space, and dance club.3

Past performers at the Belasco include 2 Chains, deadmau5, and Tyga.4

So is this the venue for the work of God? Is this God’s modern-day equivalent to Azusa Street?

Here in this well-established venue, every Thursday, Friday, and Saturday night is the compressed sounds of techno, excessive booze, modern-day burlesque girls in their ‘Victoria Secrets’, shaking their booty on stage. But a sweep of the floor, a switching on of the lights, the curtains are drawn, a tap on the microphone, and, hey, it’s Sunday morning church folks.

Let’s give all our praise and worship to Jesus!

Yet just hours before, this pleasure palace was crowded with a myriad of floodlights, synthesiser and bass, risqué dance moves, the sweat of bodies, hormones, and lime and tequila shots.

Now we mix a strange cocktail of Bibles, booze, bass and burlesque. This is spiritual suicide!

Hillsong’s motto is championing the cause of the local church everywhere, a church growing in stature, innovation and most importantly, Godly influence.5

Yet how do they possibly think the holy God of Heaven will be comfortable to manifest His presence here? Where can I ask is the godly influence? It seems nothing more than a marketing idea, such as the concept of adding the word organic on the front of food packaging, or trying to reduce the sugar content to a cola by adding stevia. We have confused the world of media and harlotry, with the God who says, ‘I change not.’

Reviews of Hillsong LA suggest that church at Belasco theatre is fun while others comment that the surroundings are dark, the music too loud, and you have to have broad smiles and fake being happy.6

It seems Hillsong is picking up from where historically the Roman Catholic Church has always been Christianising pagan temples and other structures into churches. A notable strategy called interpretatio christiana was the practice of converting pagan practices and culture, pagan religious imagery, pagan sites, and pagan calendar to Christian uses as a form of proselytization (evangelism). The idea was to take a non-Christian cultural element or historical fact with a view to adapting it to Christianity by means of appropriate interpretation and morphing it into the world view of Christianity.11

In Buenos Aires Argentina they are doing the same thing, Church held in a rented downtown theatre where heavy metal bands like Slash, Sabaton and Megadeth have held concerts. I also note that all these church plants are in cities and areas of money and affluence, never in a slum district, where the Lord Jesus would willingly go.

I do not think the devil cares how many churches you build, if only you have lukewarm preachers and people in them.— Charles Spurgeon

As the Mama and Papas song California Dreamin’ narrates, one of them stopped into a church he passed along the way. Maybe this is Brian’s hope as well.

But to keep filling these ever expanding venues, Brian’s false gospel of accepting Jesus as ‘Lord of your heart’ provides the necessary splash of holy water, and keeps the flock coming back for the ‘atmosphere’.12

So is this the way God builds His church? I wonder. 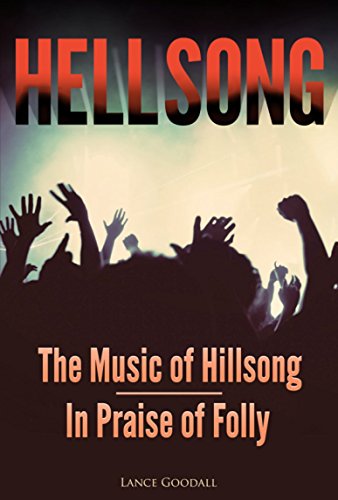