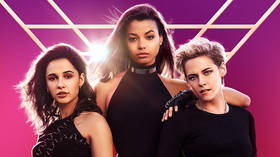 Michael McCaffrey lives in Los Angeles where he works as an acting coach, screenwriter and consultant. He is also a freelance film and cultural critic whose work can be read at RT, Counterpunch and at his website mpmacting.com.

The new ‘Charlie’s Angels’ movie is more proof that vacuous and vapid woke feminist films are box office poison. Will Hollywood learn from this critical and financial failure?

‘Charlie’s Angels’, a reboot of the old 70’s TV show and the early 2000’s movies, that stars Kristen Stewart of Twilight fame, along with relative unknowns Naomi Scott and Ella Balinski, hit theaters last weekend with blockbuster ambitions and a defiant “girl power” message. Not surprisingly, the film opened with a resounding thud and fell decidedly flat with audiences as evidenced by its paltry $8.6 million box office.

Elizabeth Banks, who wrote and directed the movie, unabashedly declared it to be a feminist enterprise filled with “sneaky feminist ideas.”

“One of the statements this movie makes is that you should probably believe women.”

The films star, Kristen Stewart, said of the movie,“It’s kind of like a ‘woke’ version.”

Charlie’s Angels’ failure is just the most recent evidence that woke feminist films are box office poison. The film’s financial floundering comes on the heels of the cataclysmic, franchise-destroying performance of another big budget piece of pro-feminist propaganda, ‘Terminator: Dark Fate’, which sank at the box office like an Austrian-accented cybernetic android into a vat of molten steel. Hasta la vista, woke baby.

ALSO ON RT.COMScorsese may be right that Marvel is ‘not cinema’ – but superhero films make us feel more than identity-politics Oscar bait

There have been a plethora of like-minded girl power movies released in 2019 that have produced similarly dismal results at the box office.

One issue with many of these ill-fated woke films is that, like previous feminist flops Ghostbusters(2016) and Ocean’s 8, they are little more than remakes of male movies with females swapped in. These derivative films are the product of a craven corporatism entirely devoid of any originality or creative thought.

For example, the social justice geniuses in Hollywood decided this year it would be a good idea to remake two movies that no one wanted remade, Mel Gibson’s What Women Want (2000) and Steve Martin and Michael Caine’s Dirty Rotten Scoundrels (1998), except this time with female leads. To the shock of no one with half a brain in their head, What Men Want with Taraji P. Henson, and The Hustle, with Rebel Wilson And Ann Hathaway, resoundingly flopped.

This year’s Book Smart, directed by Olivia Wilde, was little more than a rehash of the 2007 Jonah Hill and Micheal Cera smash-hit Superbad. Replacing Hill and Cera with two teenage girls as the protagonists in the formulaic film did not inspire audiences, as indicated by the film’s anemic domestic box office of $22 million.

As evidenced by these failures, audiences of both sexes are obviously turned off by Hollywood’s ham-handed attempts at woke preaching and social justice pandering. The movie-going public is keenly aware that these woke films are not about entertainment or even artistic expressions, but rather virtue signaling and posing within the Hollywood bubble.

The female stars involved in these failing feminist projects, in front of and behind the camera, have a built in delusional defense though that immunizes them from their cinematic failures…they can always blame misogyny!

ALSO ON RT.COMDisney+ recuts own classics: Why do corporate gatekeepers think we will turn racist if they don’t censor content?

The woke in Hollywood are forever on the search for a scapegoat to relieve them of accountability, as it is never their fault that their movies fail. In the case of these female-led movies, the women involved never have to own their failures because they reflexively point their fingers in horror at the angry, knuckle-dragging men, who out of misogynist spite don’t shell out beaucoup bucks to go see their abysmally awful girl power movies.

Elizabeth Banks got an early start in the men-blaming game even before Charlie’s Angels came out when she told Australia’s Herald Sun,

“Look, people have to buy tickets to this movie, too. This movie has to make money. If this movie doesn’t make money it reinforces a stereotype in Hollywood that men don’t go see women do action movies.”

Of course, men will go see women in action movies, Wonder Woman and Captain Marvel being two prime examples of highly successful female action movies, but fear not, Elizabeth Banks dropped some feminist knowledge to counter that uncomfortable fact when she said,

“They (men) will go and see a comic book movie with Wonder Woman and Captain Marvel because that’s a male genre.”

So even when men go see a female led action film, they are only doing so because it is a “male genre,” got that?  What a convenient way to avoid responsibility… with Elizabeth Banks it is heads, she wins, and tails, men lose.

Banks preemptively blaming men for not being interested in seeing Charlie’s Angels is also odd because she has also openly stated that “women…are the audience for this film” and that she wanted to “make something that felt important to women and especially young girls”.

And according to box office figures  it seems that it isn’t just men staying away from Charlie’s Angels in droves, but everybody…including women!

What the feminists in woke Hollywood need to understand is that men and women will go see quality female-led movies, but they need to be good movies first and feminist movies a very distant second.

The problem with Charlie’s Angels, and the rest of these feminist films, is that their woke politics is their only priority, and entertainment value and artistic merit are at best just an after thought, if a thought at all.

My hope is that Hollywood will learn from the critical and financial failure of Charlie’s Angels and the rest of 2019’s feminist flops and in the future will refrain from making vacuous and vapid woke films and instead focus more on quality and originality and less on political correctness and pandering.

Subscribe to RT newsletter to get stories the mainstream media won’t tell you.

The statements, views and opinions expressed in this column are solely those of the author and do not necessarily represent those of RT.