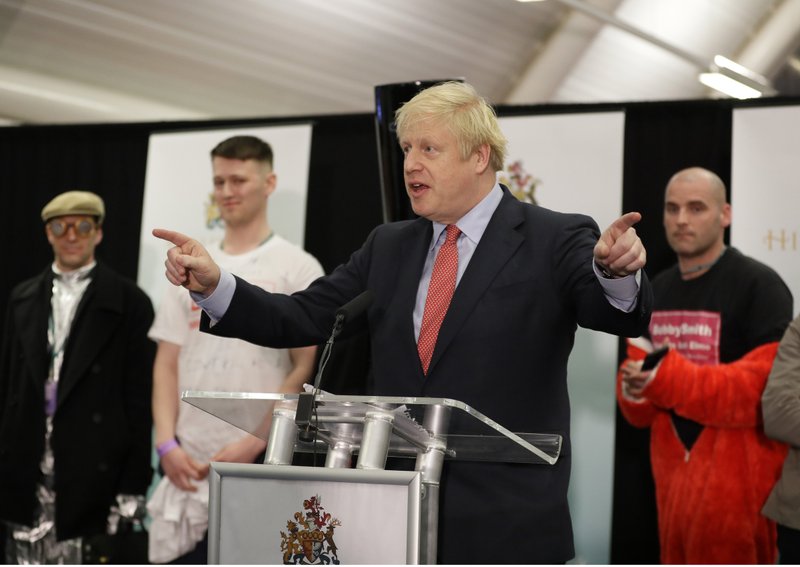 LONDON (AP) — Prime Minister Boris Johnson’s Conservative Party has won a thumping majority of seats in Britain’s Parliament — a decisive outcome to a Brexit-dominated election that should allow Johnson to fulfill his plan to take the U.K. out of the European Union next month.

With 642 of the 650 results declared on Friday, the Conservatives had 358 seats and the main opposition Labour Party 203.

Johnson said it looked like the Conservatives had “a powerful new mandate to get Brexit done.”

The victory makesJohnson the most electorally successful Conservative leader since Margaret Thatcher, another politician who was loved and loathed in almost equal measure. It was a disaster for left-wing Labour leader Jeremy Corbyn, who faced calls for his resignation even as the results rolled in.

Corbyn called the result “very disappointing” for his party and said he would not lead Labour into another election, though he resisted calls to quit immediately. 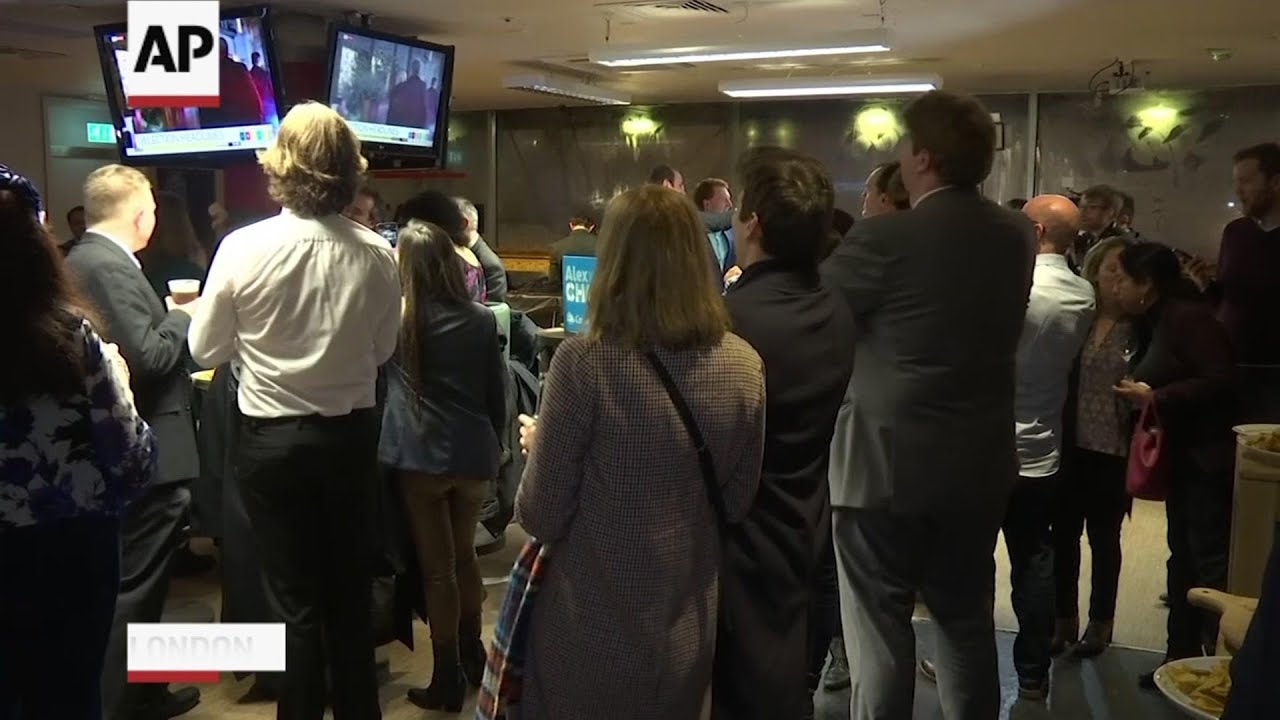 The result this time delivered the biggest Tory majority since Thatcher’s 1980s heyday, and Labour’s lowest number of seats since 1935.

The Scottish National Party won almost 50 of Scotland’s 59 seats, up from 35 in 2017, a result that will embolden its demands for a new referendum on Scottish independence.

The centrist, pro-EU Liberal Democrats took only about a dozen seats. Lib Dem leader Jo Swinson stepped down after losing in her own Scottish constituency. 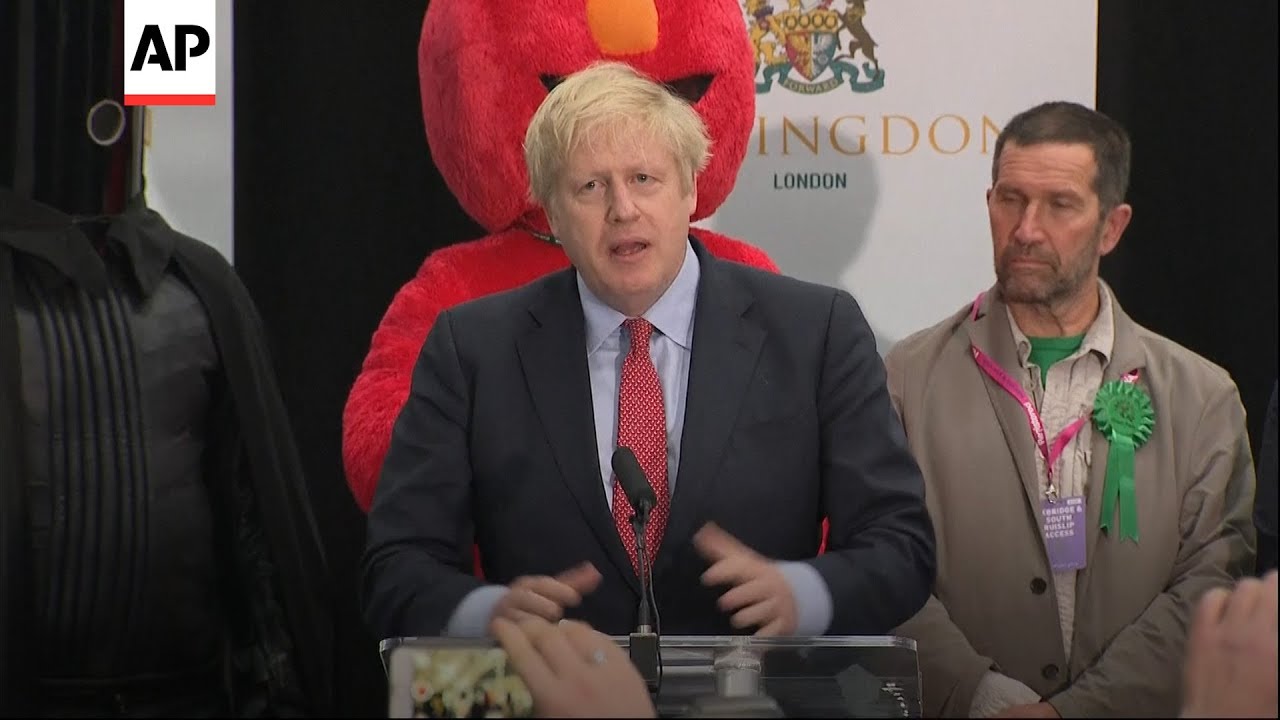 The Conservatives took a swath of seats in post-industrial northern England towns that were long Labour strongholds. Labour’s vote held up better in London, where the party managed to grab the Putney seat from the Conservatives.

The decisive Conservative showing vindicates Johnson’s decision to press for Thursday’s early election, which was held nearly two years ahead of schedule. He said that if the Conservatives won a majority, he would get Parliament to ratify his Brexit divorce deal and take the U.K. out of the EU by the current Jan. 31 deadline.

Speaking at the election count in his Uxbridge constituency in suburban London, Johnson said the “historic” election “gives us now, in this new government, the chance to respect the democratic will of the British people to change this country for the better and to unleash the potential of the entire people of this country.”

That message appears to have had strong appeal for Brexit-supporting voters, who turned away from Labour in the party’s traditional heartlands and embraced Johnson’s promise that the Conservatives would “get Brexit done.”

“I think Brexit has dominated, it has dominated everything by the looks of it,” said Labour economy spokesman John McDonnell. “We thought other issues could cut through and there would be a wider debate, from this evidence there clearly wasn’t.”

The prospect of Brexit finally happening more than three years after Britons narrowly voted to leave the EU marks a momentous shift for both the U.K. and the bloc. No country has ever left the union, which was created in the decades after World War II to bring unity to a shattered continent.

But a decisive Conservative victory would also provide some relief to the EU, which has grown tired of Britain’s Brexit indecision.

Britain’s departure will start a new phase of negotiations on future relations between Britain and the 27 remaining EU members.

EU Council President Charles Michel promised that EU leaders meeting Friday would send a “strong message” to the next British government and parliament about next steps.

The pound surged when an exit poll forecast the Tory win, jumping over two cents against the dollar, to $1.3445, the highest in more than a year and a half. Many Investors hope a Conservative win would speed up the Brexit process and ease, at least in the short term, some of the uncertainty that has corroded business confidence since the 2016 vote.

Many voters casting ballots on Thursday hoped the election might finally find a way out of the Brexit stalemate in this deeply divided nation. Three and a half years after the U.K. voted by 52%-48% to leave the EU, Britons remain split over whether to leave the 28-nation bloc, and lawmakers have proved incapable of agreeing on departure terms.

On a dank, gray day with outbreaks of blustery rain, voters went to polling stations in schools, community centers, pubs and town halls after a bad-tempered five-week campaign rife with mudslinging and misinformation.

Opinion polls had given the Conservatives a steady lead, but the result was considered hard to predict, because the issue of Brexit cuts across traditional party loyalties.

Johnson campaigned relentlessly on a promise to “Get Brexit done” by getting Parliament to ratify his “oven-ready” divorce deal with the EU and take Britain out of the bloc as scheduled on Jan. 31.

The Conservatives focused much of their energy on trying to win in a “red wall” of working-class towns in central and northern England that have elected Labour lawmakers for decades but also voted strongly in 2016 to leave the EU. That effort got a boost when the Brexit Party led by Nigel Farage decided at the last minute not to contest 317 Conservative-held seats to avoid splitting the pro-Brexit vote.

Labour, which is largely but ambiguously pro-EU, faced competition for anti-Brexit voters from the centrist Liberal Democrats, Scottish and Welsh nationalist parties, and the Greens.

But on the whole Labour tried to focus the campaign away from Brexit and onto its radical domestic agenda, vowing to tax the rich, nationalize industries such as railroads and water companies and give everyone in the country free internet access. It campaigned heavily on the future of the National Health Service, a deeply respected institution that has struggled to meet rising demand after nine years of austerity under Conservative-led governments.

It appears that wasn’t enough to boost Labour’s fortunes. Defeat will likely spell the end for Corbyn, a veteran socialist who moved his party sharply to the left after taking the helm in 2015, but who now looks to have led his left-of-center party to two electoral defeats since 2017. The 70-year-old left-winger was also accused of allowing anti-Semitism to spread within the party.

“It’s Corbyn,” said former Labour Cabinet minister Alan Johnson, when asked about the poor result. “We knew he was incapable of leading, we knew he was worse than useless at all the qualities you need to lead a political party.”

For many voters, the election offered an unpalatable choice. Both Johnson and Corbyn have personal approval ratings in negative territory, and both have been dogged by questions about their character.

Johnson has been confronted with past broken promises, untruths and offensive statements, from calling the children of single mothers “ignorant, aggressive and illegitimate” to comparing Muslim women who wear face-covering veils to “letter boxes.”

Yet, his energy and determination proved persuasive to many voters.

“It’s a big relief, looking at the exit polls as they are now, we’ve finally got that majority a working majority that we have not had for 3 1/2 years,” said Conservative-supporting writer Jack Rydeheard. “We’ve got the opportunity to get Brexit done and get everything else that we promised as well. That’s investment in the NHS, schools, hospitals you name it — it’s finally a chance to break that deadlock in Parliament.”