A major Christian magazine has turned against Donald Trump, saying he “morally lost and confused” and should be removed from office.

Dec 20 2019
A leading US evangelical Christian publication, has turned against President Donald Trump — writing that he is “morally lost and confused” and should be removed from office.

In an editorial, Christianity Today  said it generally steers clear of politics but “we do feel it necessary from time to time to make our own opinions on political matters clear.”

“The facts in this instance are unambiguous,” it said.

“The President of the United States attempted to use his political power to coerce a foreign leader to harass and discredit one of the president’s political opponents.”

“That is not only a violation of the Constitution; more importantly, it is profoundly immoral.” Christianity Today was founded by Billy Graham, a prominent Christian evangelist who died last year, but the Graham family is no longer associated with the publication.

Christianity Today, which has a circulation of around 130,000, said Trump has “dumbed down the idea of morality in his administration.

“He himself has admitted to immoral actions in business and his relationship with women, about which he remains proud,” it said.

“His Twitter feed alone — with its habitual string of mischaracterisations, lies, and slanders — is a near perfect example of a human being who is morally lost and confused.

Christianity Today said the congressional hearings that led to Mr Trump’s impeachment by the House of Representatives on Wednesday “have illuminated the president’s moral deficiencies for all to see”.

To the many evangelicals who continue to support Mr. Trump in spite of his blackened moral record. Remember who you are and whom you serve.

Consider how your justification of Mr. Trump influences your witness to your Lord and Savior

Trump Should Be Removed from Office

It’s time to say what we said 20 years ago when a president’s character was revealed for what it was.

“Trump’s evangelical supporters have pointed to his Supreme Court nominees, his defence of religious liberty, and his stewardship of the economy, among other things, as achievements that justify their support of the president,” it said.

The comments in CT were adamant “We believe the impeachment hearings have made it absolutely clear… that President Trump has abused his authority for personal gain and betrayed his constitutional oath.”

The magazine asked: “Can we say with a straight face that abortion is a great evil that cannot be tolerated and, with the same straight face, say that the bent and broken character of our nation’s leader doesn’t really matter in the end?

“Whether Mr. Trump should be removed from office by the Senate or by popular vote next election — that is a matter of prudential judgment.

“That he should be removed, we believe, is not a matter of partisan loyalties but loyalty to the Creator of the Ten Commandments.”

Mr Trump enjoys solid support among white evangelical Christians although a Fox News poll in October found that those backing him had slipped from 81 per cent in the 2016 election to around 70 per cent now.

WASHINGTON (AP) — President Donald Trump blasted a prominent Christian magazine on Friday, a day after it published an editorial arguing that he should be removed from office because of his “blackened moral record.”

Trump tweeted that Christianity Today, an evangelical magazine founded by the late Rev. Billy Graham, “would rather have a Radical Left nonbeliever, who wants to take your religion & your guns, than Donald Trump as your President.”

The magazine “has been doing poorly and hasn’t been involved with the Billy Graham family for many years,” Trump wrote. He questioned whether the magazine would prefer a Democratic president “to guard their religion.”

Some of his strongest evangelical supporters, including Graham’s son, rallied to his side and against the publication. Their pushback underscored Trump’s hold on the evangelical voting bloc that helped propel him into office and suggested the editorial would likely do little to shake that group’s loyalty.

Rev. Franklin Graham, who now leads the Billy Graham Evangelistic Association and prayed at Trump’s inauguration, tweeted Friday that his father would be “disappointed” in the magazine. Graham added that he “felt it necessary” following the editorial to share that his father, who died last year after counseling several past presidents, voted for Trump. The president thanked Graham for the disclosure. 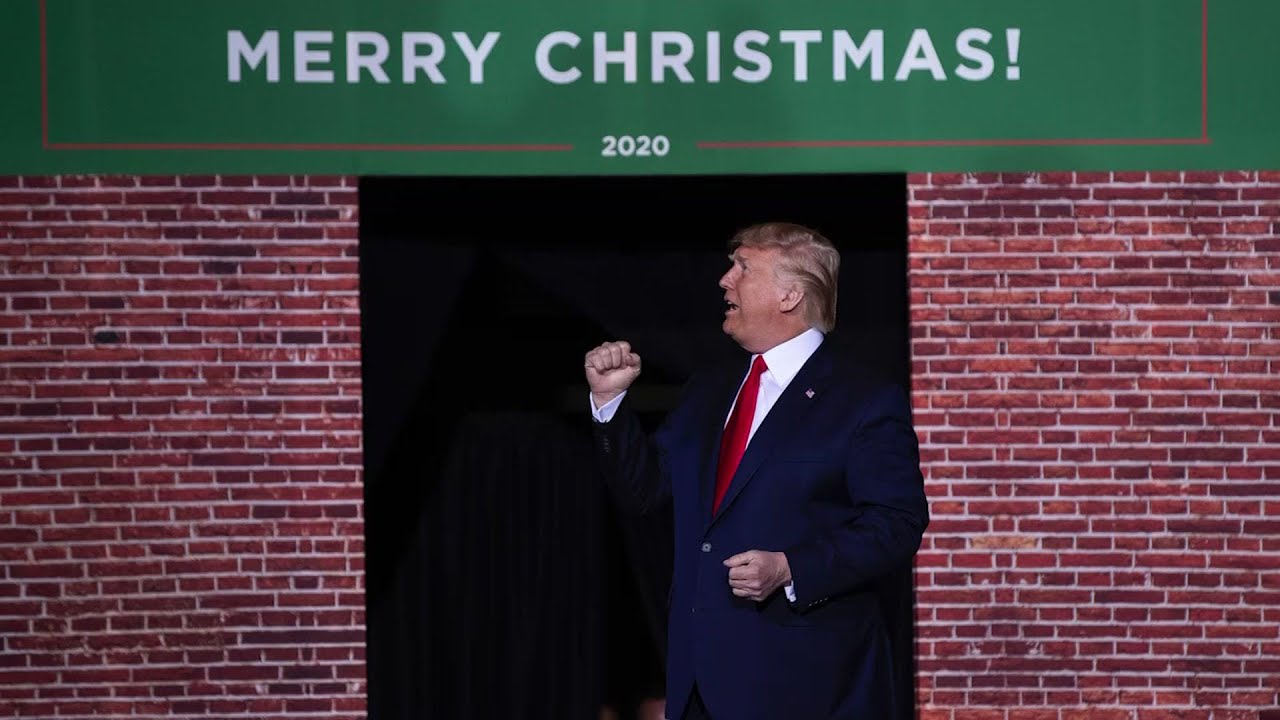 Christianity Today “represents what I would call the leftist elite within the evangelical community. They certainly don’t represent the Bible-believing segment of the evangelical community,” Graham told The Associated Press in an interview. He wrote on Facebook: “Is President Trump guilty of sin? Of course he is, as were all past presidents and as each one of us are, including myself.”

In a statement issued by the Trump reelection campaign, Cissie Graham Lynch, an advisory board member of Women for Trump and Franklin Graham’s daughter, said she was “outraged” to see the publication invoke her grandfather’s “name to support their personal political agenda.”

The magazine’s circulation is estimated at 130,000. In the editorial titled “Trump Should Be Removed from Office,” Editor-in-Chief Mark Galli wrote that Democrats “have had it out for” the president since he took office.

But Galli asserted that the facts “are unambiguous” when it comes to the acts that led to the president’s impeachment this week by the Democratic-controlled House of Representatives.

The schism among Christians about Trump dates back to before his election. Prominent Southern Baptist Russell Moore warned that Trump “incites division” in a 2015 op-ed. The essay cited the Bible in asking fellow Christians to “count the cost of following” him. It later earned a tweeted lashing from then-candidate Trump.

After Trump defended a 2017 white nationalist rally that turned violent in Charlottesville, Virginia, one member of his evangelical advisory board stepped down, citing “a deepening conflict in values between myself and the administration.”

But no such break has occurred between the president and the core of his evangelical base. Trump is deeply popular among white evangelical Protestants, with roughly 8 in 10 saying they approve of the way he is handling his job, according to a December poll from The AP-NORC Center.

Many prominent evangelicals have only intensified their support for Trump as Democrats moved to impeach him, circling the wagons despite Trump’s personal history, which includes multiple allegations of sexual misconduct, deeply divisive policies and profanity laced comments.

At the heart of that backing is what pro-Trump evangelicals view as the president’s significant record of achievement on their highest priorities, such as his successful installation of more than 150 conservative federal judges and his support for anti-abortion policies.

“No President has done more for the Evangelical community, and it’s not even close,” Trump said in his tweets. He declared that he “won’t be reading ET again!” using the wrong initials to describe the Christian publication.

Johnnie Moore, a member of Trump’s evangelical advisory board, tweeted that during the “hyperventilating” over the “inconsequential” editorial, he was at Vice President Mike Pence’s residence, “where dozens of evangelicals who actually lead MILLIONS were celebrating Christmas undistracted by impeachment & grateful” for the administration’s policies.

Adding that Christianity Today “only represents a certain segment of evangelicals,” Moore tweeted that “this is not a game changing moment or hardly a surprise.”

Another Trump evangelical adviser, Southern Baptist megachurch pastor Robert Jeffress, tweeted that the magazine is “dying” and “going against 99% of evangelical Republicans who oppose impeachment.”

The editorial did not take a position on whether Trump should be removed by the Senate or by popular vote in the 2020 election, calling it “a matter of prudential judgment.” But Galli wrote that the need for Trump’s removal “is not a matter of partisan loyalties but loyalty to the Creator of the Ten Commandments.”

The editorial came one day after Trump became the third president in American history to be impeached. The House charged him with abuse of power in pressuring Ukraine to announce investigations of Biden, and with obstructing Congress in the ensuing probe.

Asked Friday in an interview with CNN about Trump’s critical tweets, Galli said the president’s characterization of the magazine as far left was “far from accurate.” But Galli, who is set to retire from his post next month, also said he is realistic about the impact of his words.

“I don’t have any imagination that my editorial is going to shift their views on this matter,” Galli said of the president’s supporters. “The fact of the matter is Christianity Today is not read by the people — Christians on the far right, by evangelicals on the far right — so they’re going to be as dismissive of the magazine as President Trump has shown to be.”

Amid the furor over the editorial, the Trump campaign announced plans for a Jan. 3 event in Miami called “Evangelicals for Trump.”

Did they impeach JFK for his impropriety? No they shot him?

Did they impeach Lyndon Johnson for extending the war in Vietnam?

What about Bill Clinton – Impeached but never removed from office.

What does this Christian magazine really expect in a president?

Perhaps they would have impeached King David?

As Infowars reported in 2017, the Deep State is also planning to remove Vice President Pence to install Nancy Pelosi as the president, with Hillary Clinton as a close advisor if not the new Vice President: