Iraqi supporters of an Iranian-backed militia on Tuesday stormed the US embassy compound in Baghdad and set it partly on fire during a rowdy demonstration that has raised tensions between Tehran and Washington.

The protesters broke down the US embassy gate door and managed to make their way into the security kiosk at the entrance of the heavily guarded compound, as gunshots and sirens rang out in the Iraqi capital, according to news organisations and video footage.

Security forces fired tear gas and stun guns in an attempt to disperse the hundreds of protesters, injuring at least two militiamen. The guard towers protecting the massive compound also appeared to be on fire.

US president Donald Trump blamed Iran for both the attack on the military facility and the embassy attack. 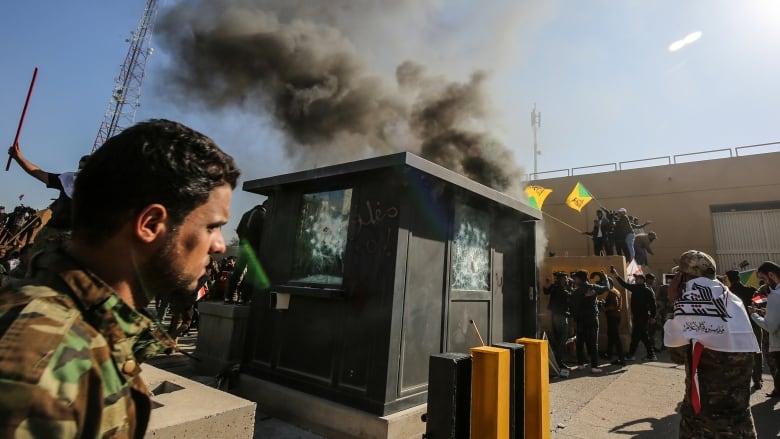 Iraqi Shia supporters of an Iran-backed militia set a sentry box ablaze in front of the U.S. Embassy in Baghdad to protest American airstrikes. (Ahmad al-Rubaye/AFP via Getty Images)

President Donald Trump on Tuesday blamed Iran for planning an attack on the U.S. Embassy in Iraq and promised to hold Tehran “fully responsible.”

“Iran killed an American contractor, wounding many. We strongly responded, and always will,” the president wrote on Twitter. “Now Iran is orchestrating an attack on the U.S. Embassy in Iraq. They will be held fully responsible.”

“In addition, we expect Iraq to use its forces to protect the Embassy, and so notified!” he added.

Iran killed an American contractor, wounding many. We strongly responded, and always will. Now Iran is orchestrating an attack on the U.S. Embassy in Iraq. They will be held fully responsible. In addition, we expect Iraq to use its forces to protect the Embassy, and so notified!

Trump’s tweet came after dozens of angry Iraqi Shiite militia supporters stormed the U.S. Embassy compound in Baghdad and set fire to a reception area on the grounds earlier in the day.

The Iraqi supporters, many dressed in military apparel, pushed into the compound using cars to break through its gate. The protesters hung a poster on the wall saying, “America is an aggressor.”

Though the mob stopped short of entering the main building of the compound, many shouted “Down, Down, USA!” and flung water and rocks over the embassy walls. About 30 Iraqi soldiers in armored vehicles arrived near the embassy hours after the violence, according to an Associated Press report.

The attack followed deadly U.S. airstrikes on Sunday that killed 25 fighters of the Iran-backed militia in Iraq, carried out in retaliation for last week’s killing of an American contractor in a rocket attack on an Iraqi military base that American officials blamed on the militia.

“The President is in close touch with his national security team and is receiving regular updates,” said White House Press Secretary Stephanie Grisham. “As the President said, Iran is orchestrating this attack and they will be held fully responsible. It will be the President’s choice how and when we respond to their escalation.”

Later Tuesday, Secretary of Defense Mark Esper said the U.S. would be sending additional troops to the compound to assist in its protection.

“We are sending additional forces to support our personnel at the Embassy. As in all countries, we rely on host nation forces to assist in the protection of our personnel in country, and we call on the Government of Iraq to fulfill its international responsibilities to do so,” he said in a statement.

“We have taken appropriate force protection actions to ensure the safety of American citizens, military personnel and diplomats in country, and to ensure our right of self-defense,” Esper added.

The U.S. strikes over the weekend were the latest to target the Iraqi state-sanctioned and Iranian-backed militia and appear to mark the start of a more fierce power struggle between the U.S. and Iran throughout the Middle East.

While Secretary of State Mike Pompeo said Sunday’s strikes were designed to convey that the White House will not turn a blind eye to actions taken by Iran that jeopardize American lives, the Iraqi government deemed the attack a “flagrant violation” of its sovereignty and said it will reexamine its relationship with the U.S.-led coalition.

Protesters and militia fighters gather to condemn air strikes on bases belonging to Hashd al-Shaabi (paramilitary forces), outside the main gate of the U.S. Embassy in Baghdad, Iraq December 31, 2019 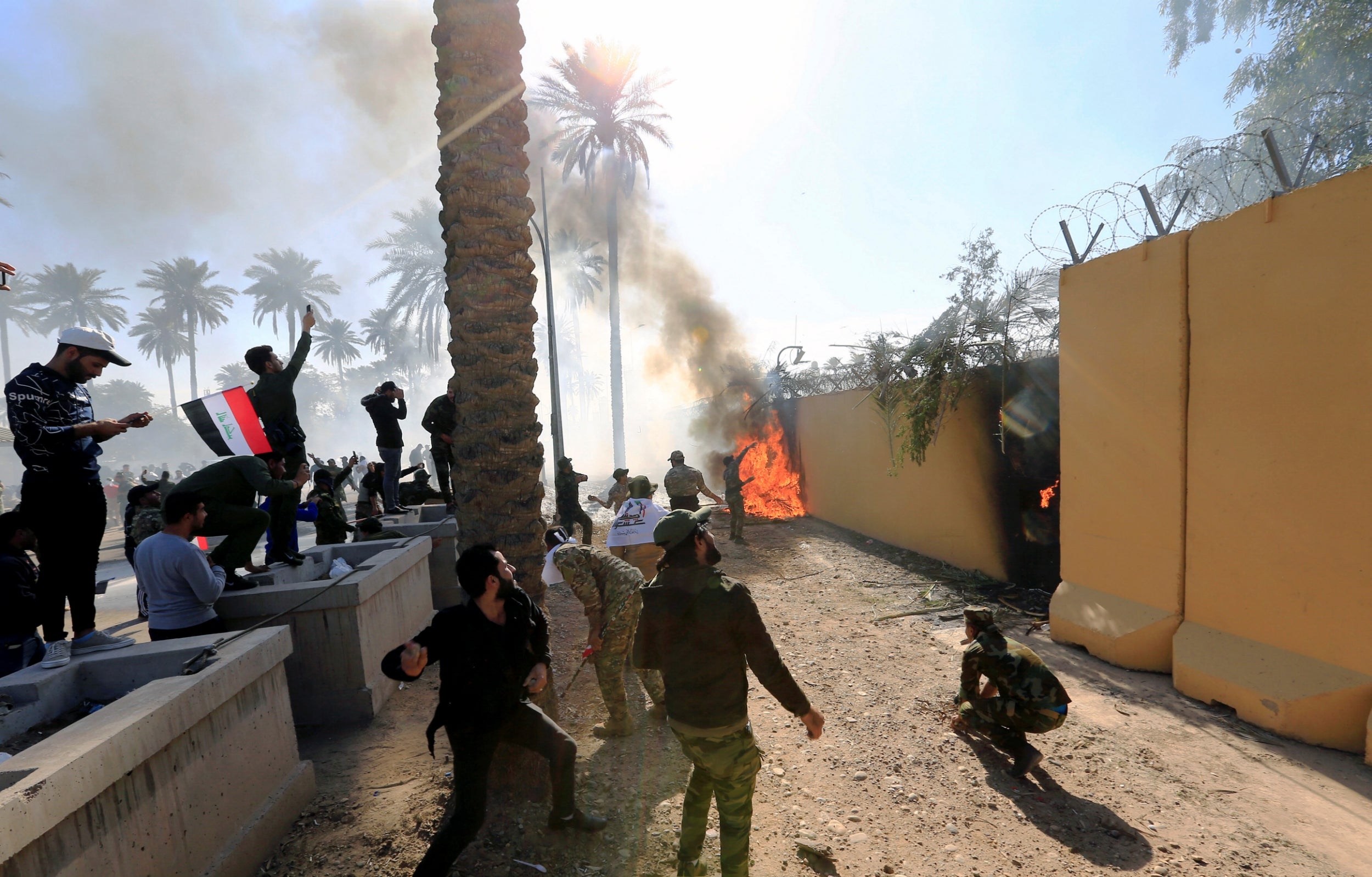 Two Apache helicopters later carried out a “show of force” over the embassy, firing off flares as they flew overhead. Officials said scores more US Marines had also been sent to the mission.

Reuters, citing unnamed Iraqi foreign ministry officials, claimed US embassy staff and the US ambassador in Baghdad had been evacuated, but a US official denied the report, saying no American personnel had been forced to leave the facility.

“CJTF-OIR is closely monitoring the current situation of the protests at the US embassy in Baghdad. No evacuations of any embassy personnel have occurred,” the US armed forces, using the acronym for US-led forces in Iraq said in a statement. “CJTF-OIR personnel in Baghdad are taking the appropriate force protection measures to ensure their safety.”

The US says it launched the airstrikes in response to an attack on a military base in northern Iraq which left an American contractor dead on Friday.

“There will be a constituency of Iraqis who would like to see America get one on the nose,” Fanar Haddad, an Iraqi scholar at the Middle East Institute of the National University of Singapore, told The Independent. “Whether we like it or not, some of [the Iranian-backed figures] are pillars of the establishment.”