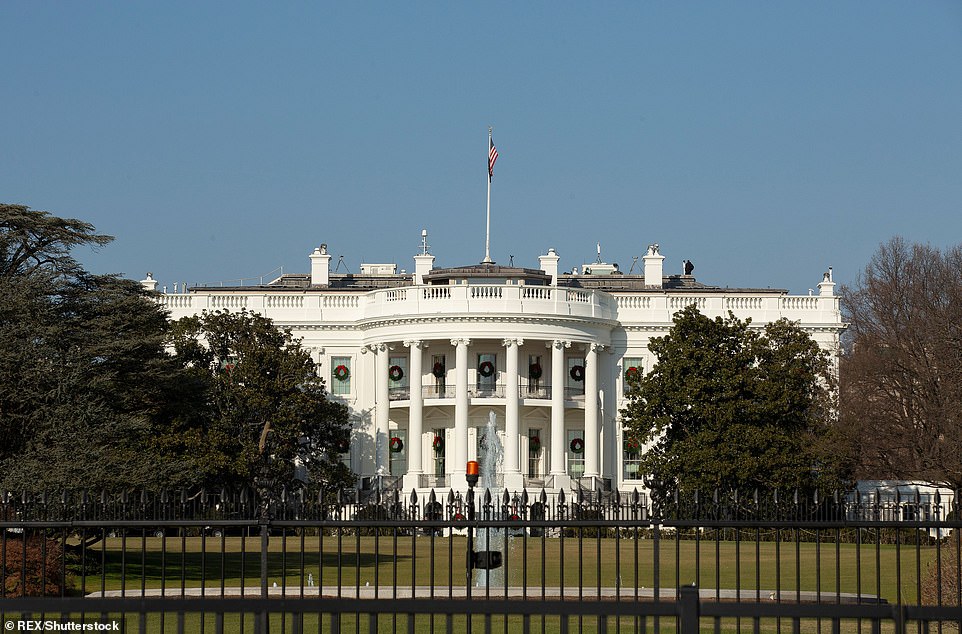 By VALERIE EDWARDS and KEITH GRIFFITH FOR DAILYMAIL.COM

Iran has reportedly placed an $80million bounty on Donald Trump’s head and threatened to attack the White House in response to the president’s warning that any strike on American interests in the region will bring massive retaliation.

According to an NBC News reporter, an organizer for a funeral procession for Gen Qassem Soleimani called on all Iranians to donate $1 each ‘in order to gather an $80million bounty on President Trump’s head’.

The organizer is said to have made the remarks during the procession in Mashad.

Iran has also announced that they will no longer abide by any of the limits of its 2015 nuclear deal.

Local news outlets cited a statement from Iranian President Hassan Rouhani’s administration saying the country will not observe limitations on its enrichment, the amount of stockpiled enriched uranium as well as research and development in its nuclear activities.

It did not elaborate on what levels it would immediately reach in its program.

The International Atomic Energy Agency, the United Nations watchdog observing Iran’s program, could not be immediately reach for comment.

‘We can attack the White House itself, we can respond to them on the American soil. We have the power, and God willing we will respond in an appropriate time,’ Abutorabi said, according to the Iranian Labour News Agency.

Abutorabi went on to say that ‘this is a declaration of war, which means if you hesitate you lose’.

‘When someone declares war do you want to respond to the bullets with flowers? They will shoot you in the head,’ he added.

Abutorabi’s threat was made during an open session of parliament in Tehran, Iran, on Sunday, and just days after Iranian military commander Qassem Soleimani, the architect of Tehran’s overseas clandestine and military operations as head of the Revolutionary Guards’ Quds Force, was killed on Friday in a US drone strike on his convoy at Baghdad airport. 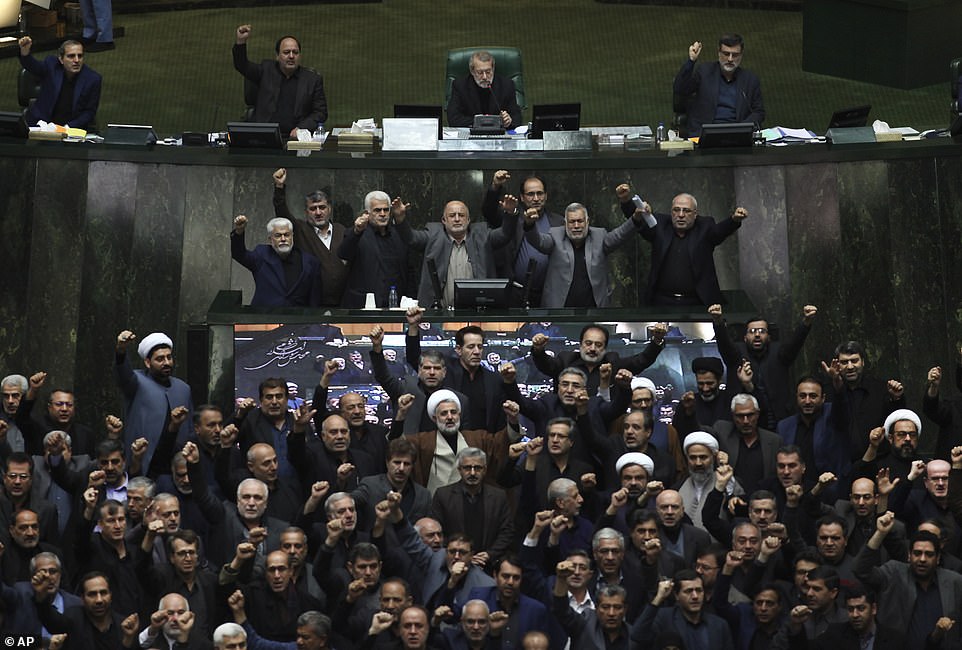 Iranian lawmakers chant anti-American and anti-Israeli slogans to protest against the US killing of Iranian top general Qassem Soleimani at the start of an open session of parliament in Tehran, Iran, on Sunday 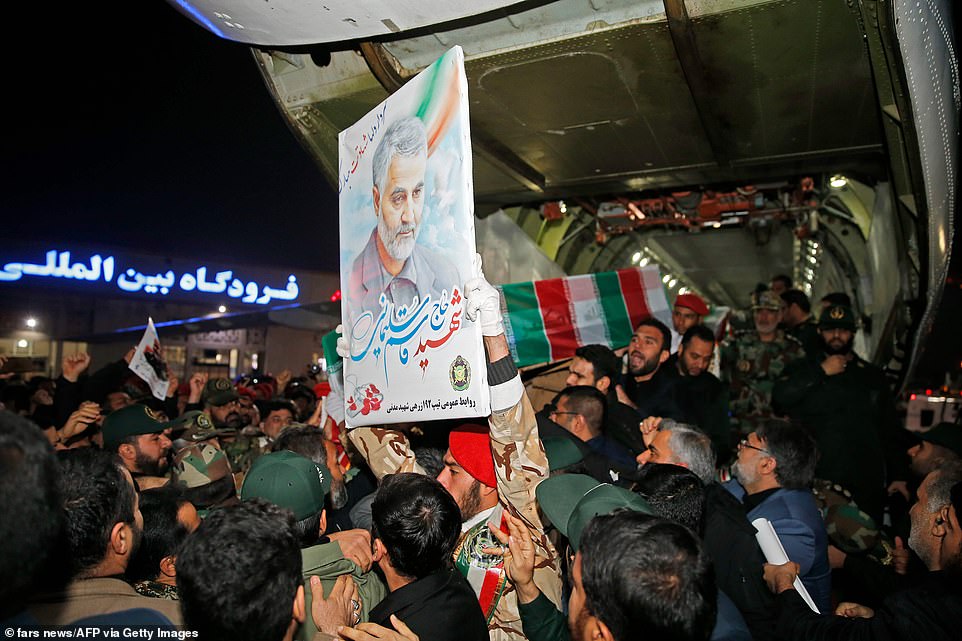 Soleimani’s body was returned to Iran on Sunday. People are seen carrying his casket upon arrival at Ahvaz International Airport in Tehran. The casket was greeted by chants of ‘Death to America’ as Iran issued new threats of retaliation 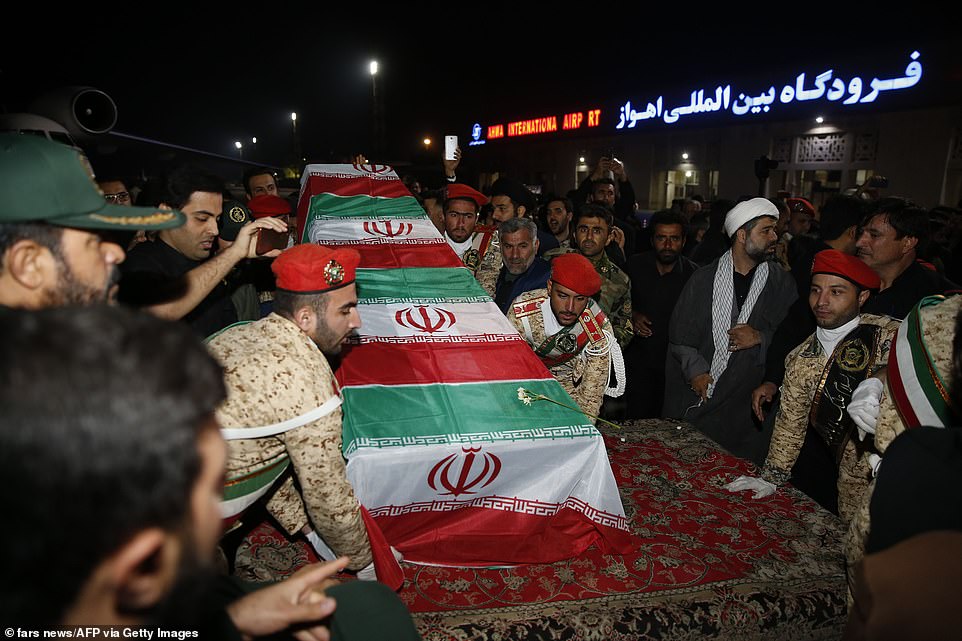 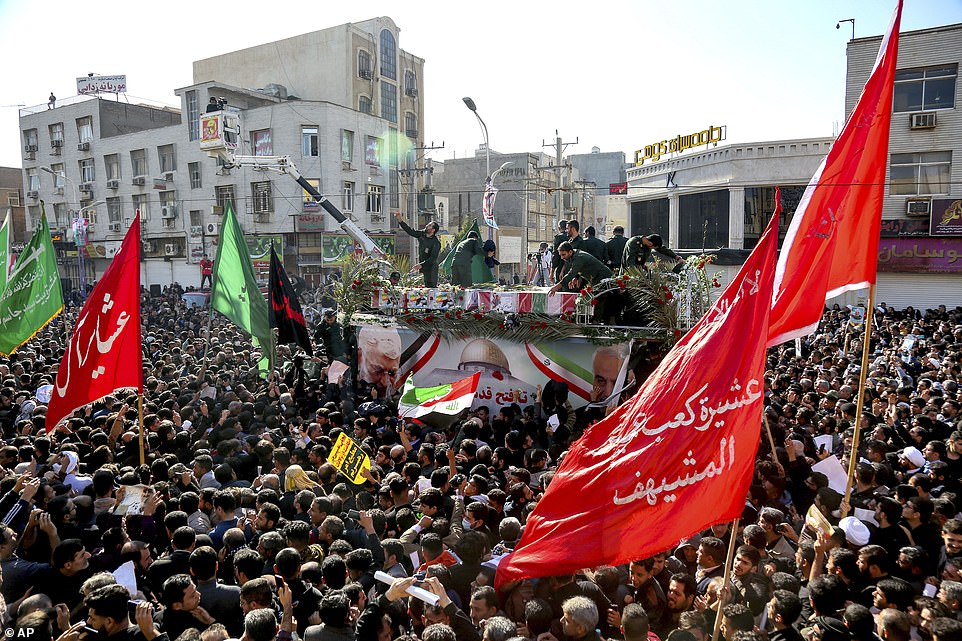 The flag-draped coffins of Gen Qassem Soleimani and his comrades who were killed in Iraq in a US drone strike, are carried on a truck surrounded by mourners during their funeral in southwestern city of Ahvaz, Iran, on Sunday

On Saturday, Revolutionary Guards commander Major General Hossein Salami promised ‘a strategic revenge which will definitely put an end to the US presence in the region’.

However, Trump, who Iranian leaders branded as a ‘terrorist in a suit’, threatened to hit 52 critical targets in Iran in retaliation if Tehran strikes any American interests in the region. He upped the stakes after Iran said it had identified 35 targets for potential strikes and raised its red ‘flags of revenge’ over a key mosque.

‘Let this serve as a WARNING that if Iran strikes any Americans, or American assets, we have targeted 52 Iranian sites (representing the 52 American hostages taken by Iran many years ago), some at a very high level & important to Iran & the Iranian culture, and those targets, and Iran itself, WILL BE HIT VERY FAST AND VERY HARD. The USA wants no more threats!’ Trump tweeted on Saturday from Mar-a-Lago, after spending the day at his nearby golf course. 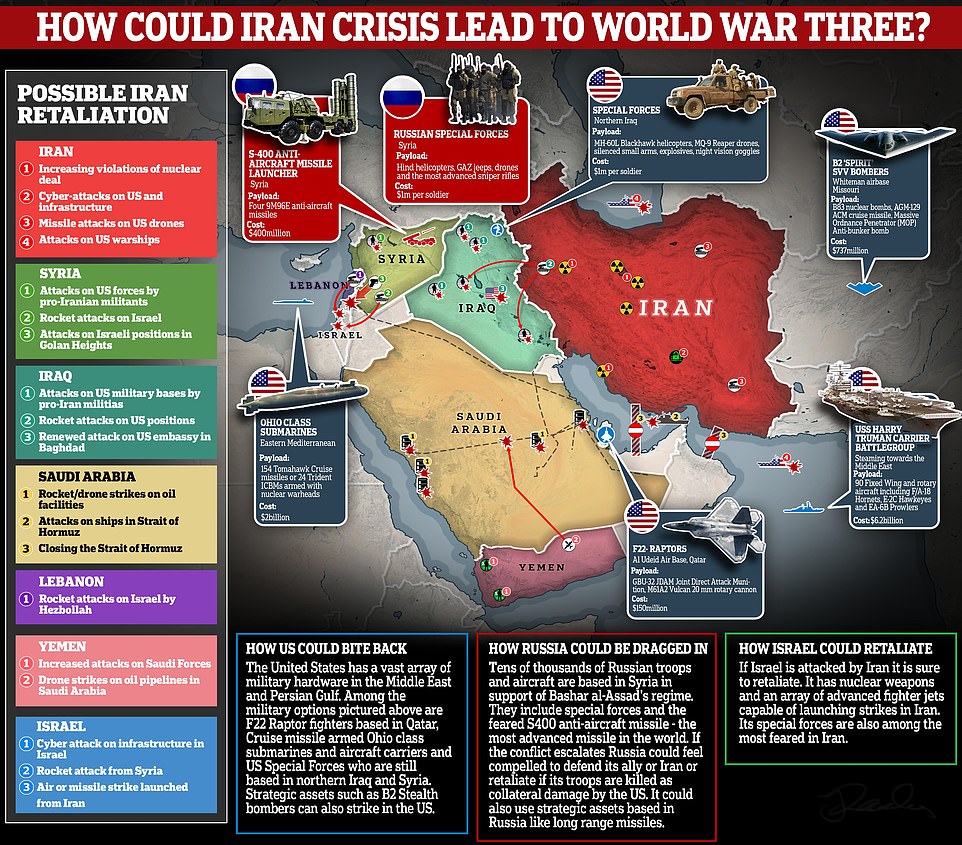 ‘Iran is talking very boldly about targeting certain USA assets as revenge for our ridding the world of their terrorist leader who had just killed an American, & badly wounded many others, not to mention all of the people he had killed over his lifetime, including recently hundreds of Iranian protesters,’ Trump said.

‘He was already attacking our Embassy, and preparing for additional hits in other locations. Iran has been nothing but problems for many years,’ he continued.

Trump’s threat referenced the Iran hostage crisis of 1979-1981, in which 52 US diplomats and citizens were held hostage by student revolutionaries in Iran.

His threat to target sites important to ‘Iranian culture’ drew many accusations from critics that he was threatening to commit ‘war crimes’.

A White House spokesman did not immediately respond to an inquiry about the list of US targets from DailyMail.com.

‘They attacked us, & we hit back,’ Trump said of the drone strike on Soleimani, which followed assaults on the US embassy in Baghdad by pro-Iranian militiamen.

‘If they attack again, which I would strongly advise them not to do, we will hit them harder than they have ever been hit before!’ he said. 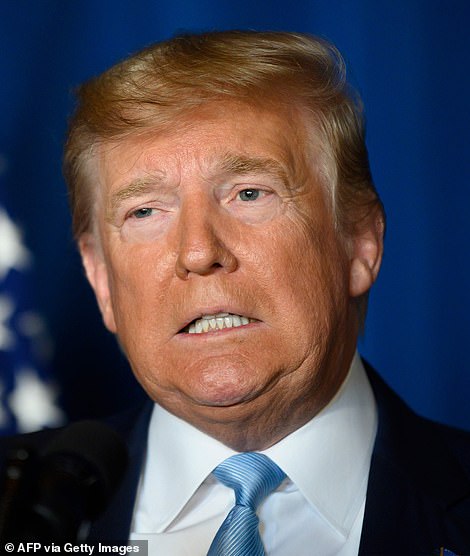 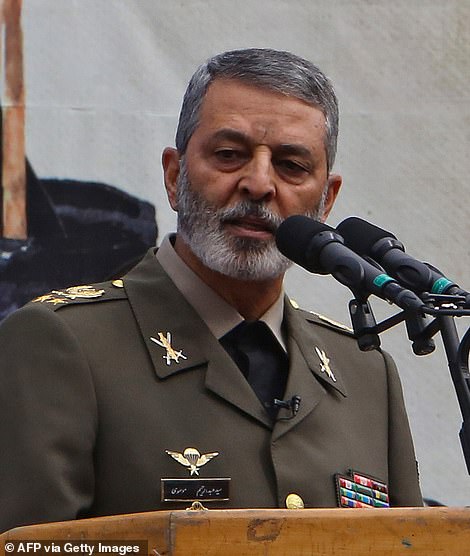 Abutorabi’s threat came just a day after Trump (pictured on Friday) threatened to hit 52 critical targets in Iran in retaliation if Tehran strikes any American interests in the region. Iran said it had identified 35 targets for potential strikes and raised its red ‘flags of revenge’ over a key mosque following the death of top general Qassem Soleimani (right)

Abutorabi made the threat against the White House (file image) during an open session of parliament on Sunday. He said: ‘This is a declaration of war, which means if you hesitate you lose’ 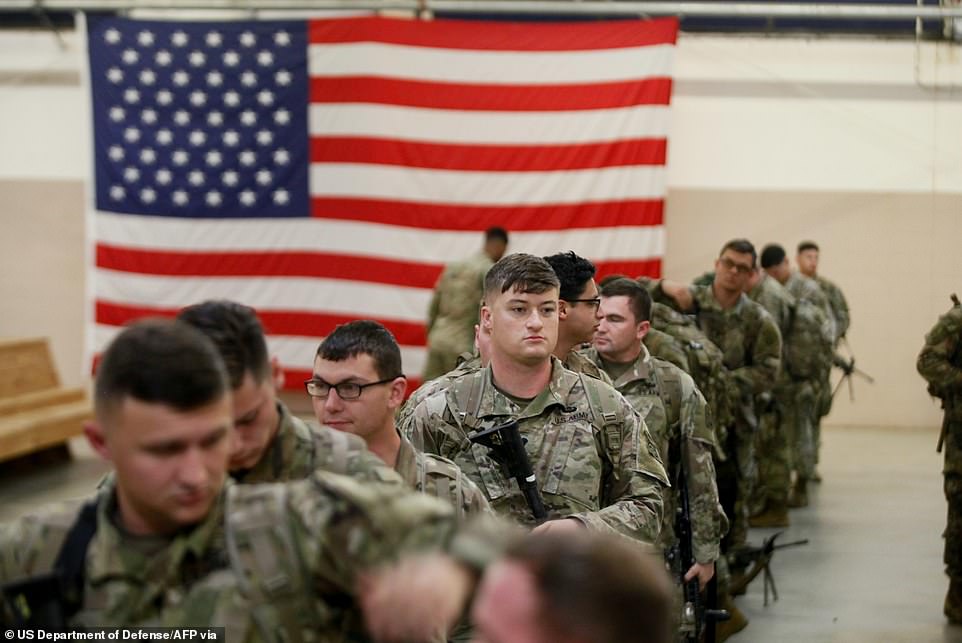 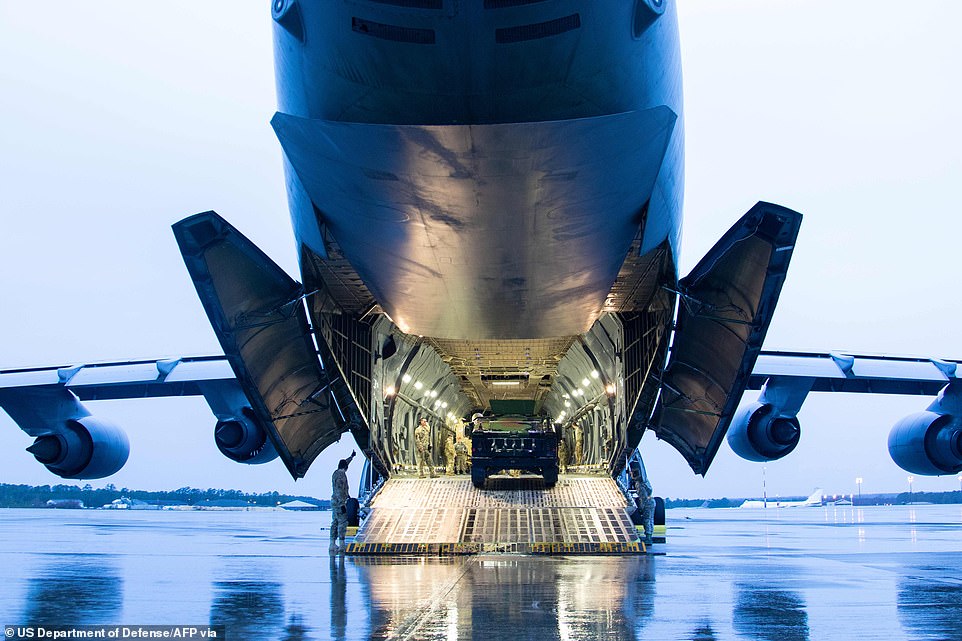 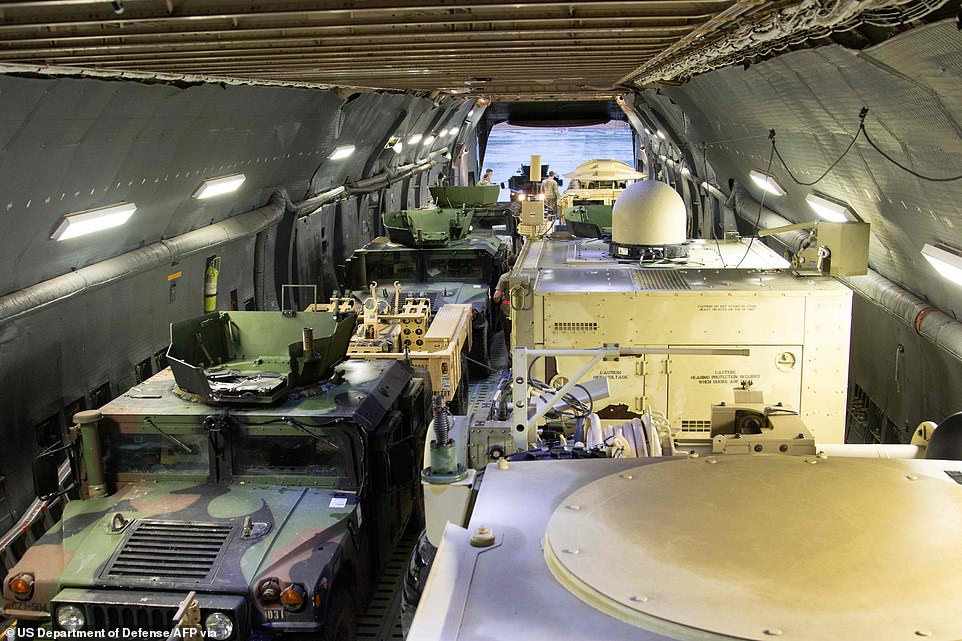 ‘The United States just spent Two Trillion Dollars on Military Equipment. We are the biggest and by far the BEST in the World! If Iran attacks an American Base, or any American, we will be sending some of that brand new beautiful equipment their way…and without hesitation!’ he said.

On Sunday, Information and Telecommunications Minister Mohammad Javad Azari-Jahromi tweeted: ‘Like ISIS, Like Hitler, Like Genghis! They all hate cultures. Trump is a terrorist in a suit. He will learn history very soon that NOBODY can defeat ”the Great Iranian Nation & Culture”.’

In a CNN interview, Hossein Dehghan, the military adviser to Supreme Leader Ayatollah Khamenei, said: ‘The response for sure will be military and against military sites.’

‘Let me tell you one thing: Our leadership has officially announced that we have never been seeking war and we will not be seeking war,’ Dehghan said.

‘It was America that has started the war. Therefore, they should accept appropriate reactions to their actions. The only thing that can end this period of war is for the Americans to receive a blow that is equal to the blow they have inflicted. Afterward they should not seek a new cycle,’ he added.

Dehghan was referring to Khamenei’s statement in May when the supreme leader said Tehran does not seek war with the US.

At the time, Khamenei said: ‘There won’t be any war. The Iranian nation has chosen the path of resistance. We don’t seek a war, and they don’t either. They know it´s not in their interests.’

Earlier on Saturday, an Iranian official said at least 35 US targets, including warships and Tel Aviv, have been identified for retaliatory strikes.

Iranian General Gholamali Abuhamzeh, a Revolutionary Guards commander in the southern province of Kerman, said vital American targets in the region were identified a ‘long time ago’, including ships in the Persian Gulf, the Strait of Hormuz and Tel Aviv.

‘The Strait of Hormuz is a vital point for the West and a large number of American destroyers and warships cross there … some 35 US targets in the region as well as Tel Aviv are within our reach,’ he said, according to Reuters.

Hezbollah, an Islamic political and militant group, has also warned Iraqi soldiers to stay at least 1,000 meters away from US military bases from Sunday onwards.

Vowing vengeance for Soleimani’s death, Iranians raised the blood-red ‘flags of revenge’ over the minarets at the revered Jamkaran Mosque in the holy city of Qom on Saturday.