– ‘Sometimes a cigar is just a cigar, and sometimes it isn’t!’

With all eyes now on Nashville, Tennessee after Christmas morning’s terrorism has brought about a no-fly zone covering a 1-nautical-mile radius of the ‘blast site’, with those skies declared ‘National Defense Airspace’ according to this story over at Western Journal, allowing deadly force to be used against aircraft flying above the bombing, almost everything about Nashville has ‘false flag’ written all over it as we’ll explore within this ANP story.

From the bizarre countdown warning played over a loudspeaker coming from an RV that allegedly exploded, warning people to leave the area while also attracting law enforcement into the blast zone, to reports that an AT&T ‘5G’ system was allegedly ‘targeted’ to some very interesting and alarming questions surrounding one of the viral videos that emerged following the bombing, there have been countless bizarre oddities surrounding this blast.

And what of reports that days before the bombing, the AT&T building in the blast zone allegedly got a contract to do a forensic audit of Dominion voting machines that were to be transported to Nashville, a claim that was seemingly confirmed by this Lin Wood tweet? And who is ‘the friend’ that Lin Wood, an attorney for President Donald Trump, is ‘asking for’ as seen in his tweet below? 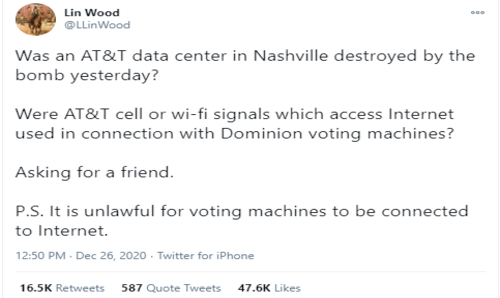 With the ‘Nashville event’ seemingly covering most of the ‘criteria’ of a false flag event seen in the image at the top of this page, including: 1) immediate national news coverage; 2) incident inspiring intense emotion (happening on Christmas day); 3) immediate federal government attention (with the FBI ‘taking charge’ and pushing the 5G paranoia narrative) as well as; 4) the huge potential political agenda, would anyone really put it past Democrat and the ‘deep state’ blowing up damning evidence against them?

And why would the airspace above the bombing site be declared ‘national defense airspace’ similar to 9/11 unless something else is going on?

From this Western Journal story before we continue.:

The skies over part of Nashville have been declared “National Defense Airspace” as the federal government reacts to the mysterious Christmas morning bombing in downtown Nashville.

At about 6:30 a.m. on Friday, an RV exploded in Nashville near an AT&T building. Residents of the area were warned to evacuate prior to the explosion, and three people were injured in the blast, which disrupted telecommunications services around the city.

In the immediate aftermath of the bombing, the Federal Aviation Administration stopped all flights out of the city, according to CNN. While flights out of Nashville have resumed, the FAA is still prohibiting “all aircraft flight operations” over an area encompassing a 1-nautical-mile radius of the blast site and has declared those skies “National Defense Airspace,” WKRN-TV reported.

According to the warning posted on the FAA website, “pilots who do not adhere to the following procedures may be intercepted, detained and interviewed by law enforcement/security personnel.”

As one of the top-rated comments on that story had mentioned:

Sometimes a cigar is just a cigar. Sometimes, it isn’t. The ATT building in Nashville that was blown up was owned by Cerebus Capital. Owners of Dominion Voting Systems, (the company many people are accusing of voter fraud) are former executives from Cerebus.

And another commenter brought up:

This is nothing more than fearmongering. There’s no real reason to declare “national defense airspace” or “deadly force” when the powers that shouldn’t be know this. Instead, keeping us afraid, locked down, and poor is where they want us until they track us, monitor us, force test us, then jab us with their toxic vaccines. DON”T FORGET the reset – everything including this Nashville event, is a part of it. Don’t be afraid. Be angry!

(ANP EMERGENCY FUNDRAISER: Due to unexpected medical and emergency repair bills, please consider donating to ANP to help keep us in this ‘Info-war’ for America at this most critical time in US history, during a time of systematic ‘big tech’ censorship and widespread Democrat corruption.) 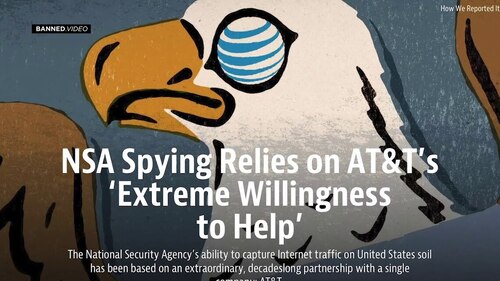 And what about that audit that Lin Powell had mentioned on twitter as was reported in this Right Journalism story titled:

“Four Days Before The Bombing In Nashville Near The At&T Building, American Patriot Alleged That AT&T Got The Contract To Do The Forensic Audit On The Dominion Voting Machines And That They Are Transported To Nashville“?

Would Democrats and the deep state actually commit terrorism upon US soil to further their political agendas, blaming such a bombing upon a ‘5g patsy‘? As we had reported in this December 25th ANP story, ‘Operation Northwoods’ is absolute proof that our own government would terrorize Americans, blaming it upon others, so we should expect the globalists/democrats to pull out all stops in the weeks ahead to make sure their ‘election steal’ goes off as smoothly (as treason and sedition is) possible.

As we had warned in this December 19th ANP story titled “Prepare For A Grid Down False Flag To Ring In 2021 As Globalists Go Back To Their Old Tricks By Demonizing Russia And ‘Telegraphing’ Something Huge Ahead – ‘We May All Have To Pay The Price'”, with a Joe Biden presidency bringing to America many of the same faces that we’d seen during Barack Obama’s 8 years in office. And many of the same ‘tactics’ being used to help them achieve their political agendas, what happened in Nashville on Christmas morning may just be their ‘warmup’ for things to come with 2021 now almost guaranteed to ‘turn hot’ before most Americans even know it.

And while we may never know exactly who carried out the Nashville bombing, as Steve Quayle mentioned in an SQnote while linking to this 2018 story over at The Intercept titled “THE WIRETAP ROOMS: THE NSA’S HIDDEN SPY HUBS IN U.S. CITIES! Atlanta, Chicago, Dallas, Los Angeles, New York City, San Francisco, Seattle, and Washington, D.C”, with the ‘deep state’ long using ‘big tech’ and ‘big communications’ like AT&T to spy upon the American people, we can be assured that THE MOST EVIL ENTITIES ON THE PLANET ordered the attack.

So just think, with Joe Biden not even in office yet, and he and the deep state globalists who love false flag terrorism possibly getting 4 to 8 years of ‘running America’ (straight into the ground we might add!), what happened on Friday morning in Nashville, Tennessee is a warning to the rest of America of what lays ahead in 2021. As Alex Newman warns in the 1st video below in a recent interview with Mike Adams, the ‘globalists enemies of America within’ are also ‘anti-human occultists’.

And in the 2nd and final video below, we hear more information on why this very well could have been a false flag event in Nashville, also used to demonize President Trump supporters, despite signs that it may have been carried out by antifa or members of the ‘deep state’ with the globalists seeking to ‘heat up America to a fever pitch’ to usher in 2021.

Thank you and God Bless. Susan and Stefan.

One time donations or monthly, via Paypal or Credit Card: