Justin Bieber is responding to TMZ and other reports that he looks bad, etc.

He says on Instagram that he has Lyme disease and chronic mono.  He should know that the Global Lyme Alliance in New York is on this and can help him. I don’t know if it can make his lyrics any better, but you never know. Also, I’m no doctor, but all that ink has probably seeped into his bloodstream.

On the upside of all this, Mediabase reports that Bieber’s new single, “Yummy,” is getting a lot of radio airplay this week. 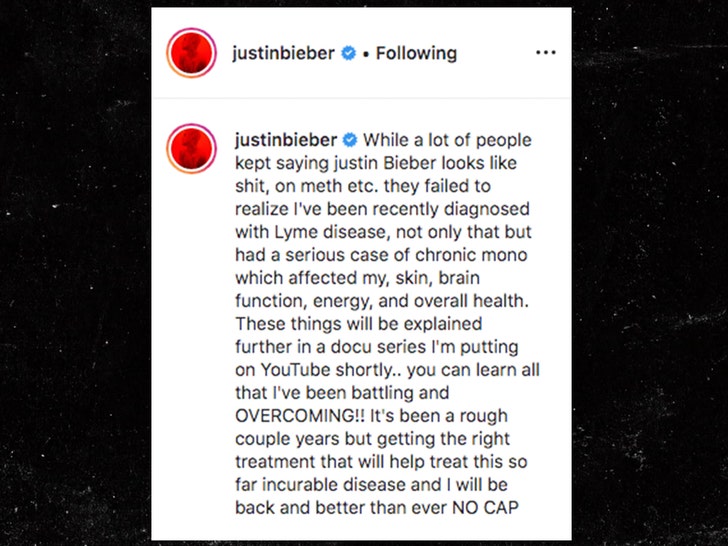 While a lot of people kept saying justin Bieber looks like shit, on meth etc. they failed to realize I’ve been recently diagnosed with Lyme disease, not only that but had a serious case of chronic mono which affected my, skin, brain function, energy, and overall health.

These things will be explained further in a docu series I’m putting on YouTube shortly.. you can learn all that I’ve been battling and OVERCOMING!! It’s been a rough couple years but getting the right treatment that will help treat this so far incurable disease and I will be back and better than ever NO CAP

Symptoms can vary depending on where you caught the infection.

The first symptom in 70-80 per cent of people infected with Lyme disease is a rash called erythema migrans. The rash appears at the site of a tick bite, between 3 and 30 days after being bitten. It starts as a red dot around the bite, and then slowly expands to form a bull’s-eye pattern, with a red outer ring surrounding a clear area in the middle. The rash is not usually itchy or painful.

Sometimes the rash also appears elsewhere on the skin away from the tick bite, which is a sign that the bacteria are multiplying in the bloodstream.

Other Lyme disease symptoms can develop a couple of days to a few weeks after the rash first appears, and include:

In the 20-30 per cent of people who do not develop the hallmark erythema migrans rash, these symptoms may be the only evidence of infection.

Untreated Lyme disease can be associated with other problems, including:

It’s possible for some complications to develop months to years after an untreated infection with Lyme disease.

Ticks attach themselves to their hosts (humans and other warm-blooded animals) and feed on the host’s blood. As they are feeding, ticks can transmit bacteria to their host. You can catch Lyme disease if you are bitten by a tick that is infected with Borrelia bacteria. In many cases, bites from tiny, immature ticks (called nymphs) cause Lyme disease.

Lyme disease is the most common tick-borne illness in North America and Europe. The ticks that cause Lyme disease (black-legged ticks) are often found in grassy and heavily wooded areas, and infections are more common in summer than at other times of the year.

The risk of developing Lyme disease is low if a tick is removed within 24 hours. That’s because ticks need to be attached to your skin for at least 36 hours before the Borrelia bacteria can enter your bloodstream.

Lyme disease cannot be passed from person to person – you can’t catch Lyme disease from someone else.

If you are concerned about Lyme disease, see your general practitioner (GP). Your doctor will ask you about your symptoms, how long you’ve had them, and whether you have recently travelled anywhere overseas. They will also perform a physical examination, looking for signs of ticks and Lyme disease (such as the characteristic rash), as well as signs of other possible causes of your symptoms.

Diagnosing Lyme disease can be difficult because many of the symptoms and signs are non-specific and similar to those of other conditions, such as the flu and other viral illnesses. The rash is the only symptom that is unique to Lyme disease, but not everyone develops the rash. Also, ticks are very small and their bites are usually painless, so some people may not realise that they have been bitten.

If your doctor thinks Lyme disease is a possibility, they will recommend you have tests.

They may also refer you to a specialist in infectious diseases.

The following blood tests can help to confirm a diagnosis of Lyme disease. These tests are highly specialised and are not always readily available in all areas. Testing for Lyme disease should be performed by laboratories that have accreditation from the National Association of Testing Authorities (NATA) and Royal College of Pathologists of Australasia (RCPA).

Sometimes a small sample of skin taken from the skin rash can be sent for testing to see if there is evidence of infection with Borrelia bacteria.

Lyme disease can be treated with antibiotics. The type of antibiotics, how they are given and for how long depends on your symptoms.

People treated promptly in the early stages of the disease usually make a full recovery. When treatment is delayed, the response to treatment may be slower but most people still make a complete recovery.

Additional treatments may be needed if complications such as arthritis develop.

Symptoms are usually non-specific and typically include:

The cause of these ongoing symptoms is not known, but they should improve on their own over time. Using antibiotics for an extended period of time has not been shown to be of benefit for ongoing symptoms of Lyme disease, and may actually cause serious side effects. Extended antibiotic use is likely to do more harm than good.

Treatment of chronic Lyme disease or Lyme disease-like illness with prolonged courses of antibiotics is not currently supported by evidence from clinical studies and is not recommended.

What is Chronic Mono?

Chronic infectious mononucleosis is rare and occurs in those with immunologic abnormalities.

Such patients present with fever, lymphadenopathy, persistently elevated serum transaminases, and pancytopenia. Eye or neurologic abnormalities may also be present. Importantly, patients with CFS have none of these findings. Patients with acute EBV infection do not have pancytopenia, and their clinical presentation rapidly resolves. Chronic infectious mononucleosis is a diagnosis that should be made rarely and carefully. Commonly, patients and physicians equate increased EBV immunoglobulin G (IgG) VCA antibody titers with chronic infectious mononucleosis or CFS because more than 90% of the population has increased EBV IgG VCA antibodies. The associated findings of fatigue are coincidental and are not related causally.

Mononucleosis rarely leads to a serious condition called chronic active EBV infection, which is characterized by persistent symptoms and a viral infection that lasts longer than usual after the initial mononucleosis diagnosis.