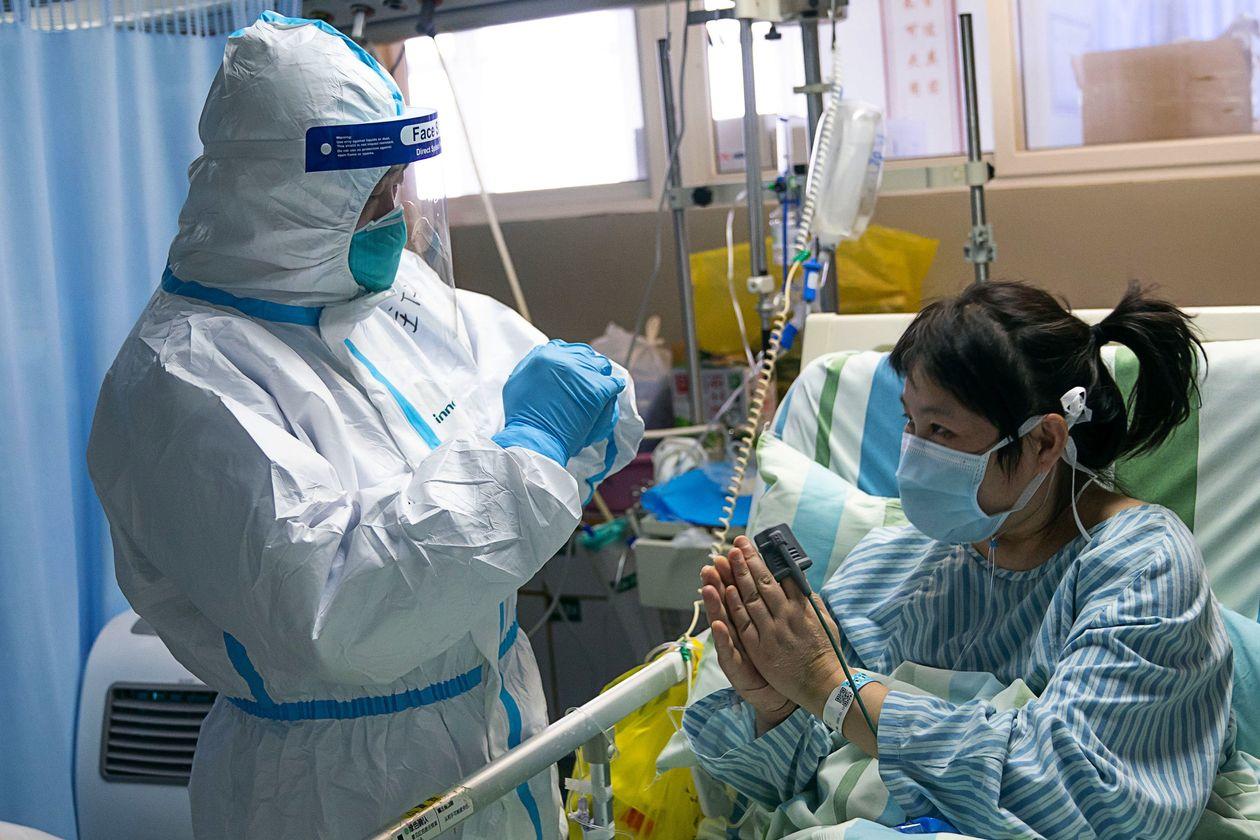 A patient at the Zhongnan Hospital of China’s Wuhan University

After staying largely silent in public about the outbreak since it first emerged in central China last month, Xi on Saturday convened a special meeting of the seven-member Politburo Standing Committee, calling for a more centralized response to the epidemic and asserting personal responsibility in addressing the crisis.

“When an epidemic breaks out, a command is issued. It is our responsibility to prevent and control it,” Xi said, according to the state-run Xinhua News Agency. He called for the new high-level committee to “address concerns within and outside the country,” indirectly referencing mounting global concern about the epidemic, which Mr. Xi described as a “grave situation” that was accelerating. “We definitely can win the battle to contain the epidemic,” he vowed.

That remains to be seen: as reported earlier, in China – which has put over 56 million people on lockdown quarantine – the coronavirus has killed at least 41 people and infected over 1,400 in China. Ominously, a UK researcher predicted that the Coronavirus would infect over 250,000 people in China in under two weeks, which has sparked a renewed fear that China will once again try to underrepresent the true severity of the diseases until it is too late.

The problem is that even as China theatrically pretends to be so forthright about the extent of the epidemic – if only to avoid panic and chaos over allegations it is again hiding the full impact of the disease – it is doing precisely that, and now we know just how it is doing that: instead of putting down coronavirus as the cause of death for an unknown number of Wuhan casualties, China’s coroners and hospitals merely ascribe death to “viral pneumonia”, case closed.

Here’s how the WSJ describes this treacherous “bait and switch”:

A 53-year-old fitness trainer died on Wednesday after checking into a hospital in Wuhan a little more than a week earlier, said his niece. His family had expected the death certificate to reflect the deadly coronavirus, because as his condition deteriorated, his doctors told his family he was suffering from an untreatable virus in his lungs.

Instead, it recorded “severe pneumonia” as the cause of death, she said. The relatives of two other people who died in separate hospitals in Wuhan this week also described similar situations, saying the causes of death had been given as “viral pneumonia.”

Why did the hospital do this? Because as the relatives of all three now dead people said, the deceased hadn’t been included in China’s official count of 41 deaths attributed to coronavirus.

And that’s how China is suppressing the full extent of nCoV’s lethality, and keeping the mortality rate of the coronavirus artificially low: “There are likely to be many times more cases in Wuhan than officially confirmed,” said Neil Ferguson, a disease modeler at Imperial College London, who echoed the forecast of Jonathan Read, and estimated as many as 4,000 people may have been infected in Wuhan. “Clearly, the hospitals are overwhelmed.”

What’s worse is that if there are indeed 4,000 injected already, then the previously discussed catastrophic forecast of 250,000 cases by Feb 4 may be overly optimistic by half. 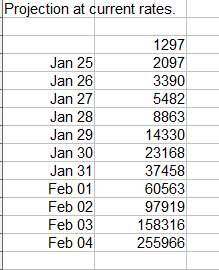 The official numbers are far lower of course: on Saturday morning, local time, the number of confirmed global infections had risen to at least 1,438, nearly doubling from the previous day. Comically, China has said it would hold officials accountable for any delays or omissions in reporting cases: so far such threats appear to have had precisely zero impact on anyone.

Others have confirmed as much: as the WSJ reports, “some Chinese media with reporters on the ground in Wuhan have said they have found cases that weren’t included in the official reporting. Caixin, a business journal, reported in early January that a doctor in Wuhan had been infected, 11 days before officials confirmed that medical staff had been infected. The Beijing News, a newspaper, reported this week that many patients weren’t officially labeled as carrying the new virus, even though their doctors and nurses said they were.”

That said, there may be a legitimate reason why the real number is being underreported, and it has to do with the flood of actual cases which is just too much for local doctors to keep up: China state-run TV cited doctors in Wuhan who said the number of patients with fever was too many to be treated and patients hospitalized couldn’t get the pathogenic test in time, because the samples needed to be sent to the provincial offices of the Chinese Center for Disease Control and Prevention.

That will soon change: China’s health ministry updated its protocol for identifying infections on Thursday with a simplified process for registering cases as suspected or confirmed. An earlier version, viewed by the Journal, required several steps of testing before a patient could be called a suspected case.

Yet despite these mitigating circumstances, it appears that the underlying incentive is to underreport the true extent of the epidemic for as long as possible.

One woman, a 63-year-old retiree in Wuhan, died on Tuesday, her nephew told the WSJ. The death certificate, viewed by the Journal, shows the cause of death as “pneumonia obtained from the community.” Doctors at the hospital that treated her told the family she had the new coronavirus, the nephew said, but she wasn’t counted as a case. The instance has also been reported by the Beijing News.

In another case, a 72-year-old former doctor was in the hospital for three days before he died on Tuesday, his nephew said. The doctors told the family he had caught viral pneumonia, he said. The niece said her uncle, the fitness trainer, first noticed symptoms of what he thought was a common cold in early January, which he believed he had caught at a banquet. He didn’t pay much attention initially, but a few days later, he decided to go to the hospital after seeing blood when he coughed. His niece said he had never been to the food market believed to be the epicenter of the virus.

“The doctor told us repeatedly that he caught the viral pneumonia that no medicine could treat,” she said. A patient’s immune system is the only defense, she said the family was told. “But after he died, the death certificate only said ‘severe pneumonia,’” she said, adding that she had expected the record to reflect the newly detected coronavirus.

The uncle was transferred to the infectious diseases unit on Wednesday, the niece said. Hours later, the family was informed that his condition was critical. Two days after her uncle died, China’s health ministry released the profiles of 39 deaths in Hubei due to the new virus, with two deaths listed in other provinces. She couldn’t find her uncle on the list.

As hundreds if not thousands of Wuhan residents die due to “severe pneumonia” instead of coronavirus, one can’t help but wonder if once the true cause of death is reported, instead of a 4% mortality rate as calculated by Dr. Jonathan Read, the Coronavirus epidemic won’t be in double digits – SARS was 11% – making this one of the most deadly epidemics in history.

Incidentally, here is a reminder of what happened when China’s attempts to cover up the full extent of the 2003 SARS epidemic were exposed:

A Chinese doctor who exposed the cover-up of China’s SARS outbreak in 2003 has been barred from traveling to the United States to collect a human rights award, a friend of the doctor and a human rights group said this week.

The doctor, Jiang Yanyong, a retired surgeon in the People’s Liberation Army, was awarded the Heinz R. Pagels Human Rights of Scientists Award by the New York Academy of Sciences. His army-affiliated work unit, Beijing’s Hospital 301, denied him permission to travel to the award ceremony in September, Hu Jia, a Chinese rights promoter who is a friend of Dr. Jiang’s, said Thursday.

Dr. Jiang rose to international prominence in 2003, when he disclosed in a letter circulated to international news organizations that at least 100 people were being treated in Beijing hospitals for severe acute respiratory syndrome, or SARS. At the time, the Chinese medical authorities were asserting that the entire nation had only a handful of cases of the disease.

The revelation prompted China’s top leaders to acknowledge that they had provided false information about the epidemic. The health minister and the mayor of Beijing were removed from their posts.

Surely this time is different.

* Chinese government faces mounting accusations of censoring the true extent of the coronavirus outbreak
* Critics have said the Communist regime in Beijing is scrubbing critical videos from the internet
* Government figures say 1,400 people have been infected by coronavirus so far
* China’s president Xi Jinping warns of ‘grave situation’ as killer coronavirus accelerates
* Cities across the US are on high alert as two coronavirus cases are confirmed in Chicago and Washington
* Sixty-three Americans are tested in 22 states and 1,000 US citizens told to evacuate Ground Zero in Wuhan

A nurse wearing a protective suit and face mask treating the sick in Wuhan has claimed that 90,000 people have already been infected by the coronavirus in China – far more than the figure of just 1,400 issued by government officials.

Her warning from the heart of the outbreak emerged as the Chinese government faced accusations of censoring criticism of its handling of the disease in order to play down the crisis.

Speaking in video footage seen online, the unnamed woman says: ‘I’m in the area where the coronavirus started. I’m here to tell the truth. At this moment, Hubei province, including Wuhan area, even China, 90,000 people have been infected by coronavirus.’