Officials in some parts of rural China are employing the help of drones to watch over citizens and tell them to stay indoors, as the country faces an epidemic that has killed 361 people.

One video posted by the state-run Global Times newspaper shows a drone flying over villages in the Inner Mongolia region, with a voiceover giving orders to those below.

An elderly woman is seen looking baffled as the voice says “yes, aunty, this is the drone speaking to you. You shouldn’t walk about without wearing a mask.”

“You’d better go back home and don’t forget to wash your hands … we’ve been telling people to stay at home, but you still wander outside.

A separate video posted by the Global Times allegedly showed a drone spraying sanitiser as part of efforts to control the coronavirus.

Drones have been used in Jinfeng district of Northwest China’s Ningxia Hui Autonomous Region to spray sanitizer during prevention efforts against the #novelcoronavirus on Sun. Another group of drones were used to broadcast prevention knowledge.(Courtesy of Yang Dongdong) 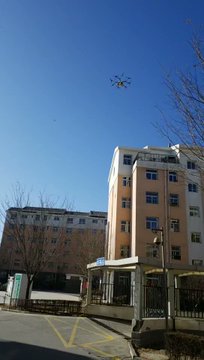 Another clip posted to the social media site Weibo showed a group of people playing the tile-based game mahjong in a village near the southwestern city of Chengdu being told to disperse after being spotted by a camera mounted on a patrolling drone.

“Playing mahjong outside is banned during the epidemic. You have been spotted. Stop playing and leave the site as soon as possible,” an official orders the villagers through a microphone while watching footage sent by the drone to his screen.

“Don’t look at the drone, child; ask your father to leave immediately,” the official tells a boy seen looking curiously up at the drone.

Regardless of the severe health scare, some Chinese netizens on Weibo were amused by the clip.

“So hardcore! High-tech makes life more efficient,” said one Weibo user. Others questioned whether the videos were real or simply created by the Chinese Communist Party for propaganda purposes.

Beijing has been calling on people to stay at home and try to avoid gathering together to prevent the spread of the virus. Shops, movie theatres and restaurants in some places have also been shut down.

More than a dozen cities in Hubei, including the provincial capital of Wuhan where the virus first emerged, are in virtual lockdown.

2 thoughts on “China Coronavirus: Dystopia Drones Zero In On Citizens Without Masks”