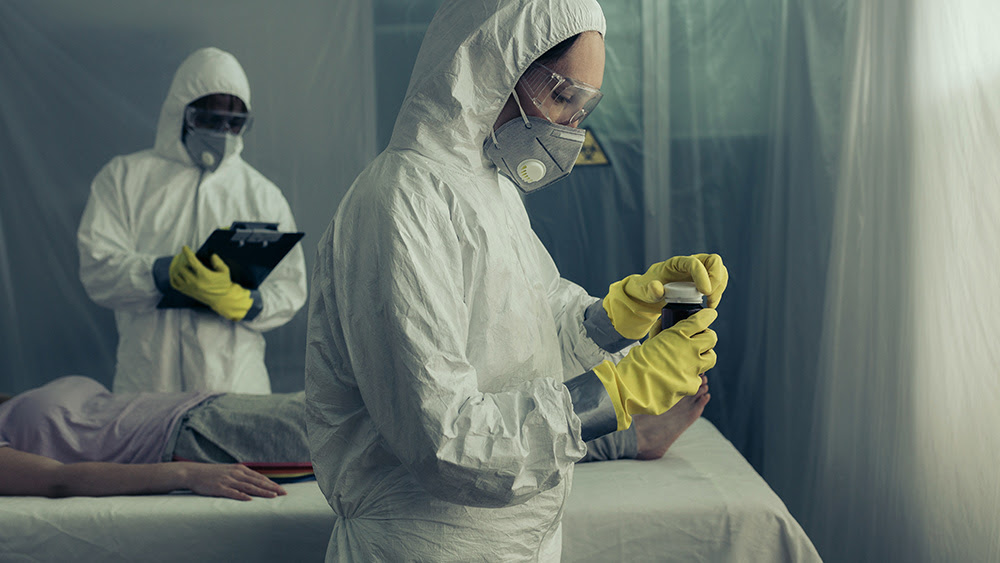 Faced With Existential Threat to Their Rule, Chinese Leaders Decide to Save 11 Cities From Coronavirus Epidemic: Insider

BY LIANG ZHEN AND OLIVIA LI

Top Chinese leaders at a Chinese Communist Party (CCP) Politburo meeting last week expressed concern that the Wuhan coronavirus outbreak may put an end to their rule. They have decided to focus on preserving 11 major cities from being devastated by the virus.

Stephen Shiu Yeuk-yuen, a senior political commentator and media professional in Hong Kong, told the Hong Kong edition of The Epoch Times on Jan. 28 that he obtained the information from an insider in the CCP’s top leadership. According to Shiu, the Politburo emergency meeting was held on Jan. 25, on the day of the Chinese New Year.

The 11 cities on the CCP’s priority list of being saved are Beijing, Tianjin, Shanghai, Guangzhou, Shenzhen, Hong Kong, Hangzhou, Xi’an, Shenyang, Harbin, and Urumqi. The CCP is prepared to protect these 11 cities at all cost, even if it means sacrificing other cities, Shiu said.

Shiu said that according to a recent research report by Professor Gabriel Matthew Leung, before the lockdown of Wuhan—where the deadly and highly contagious coronavirus originated—there were about 25,000 people infected with the coronavirus, and 15,000 additional cases during the virus incubation period. This means, the total number of infected people is roughly 40,000. Based on the spreading pattern, it is estimated that the current number of infected people around the globe is between 25,000 and 38,000.

[again these figures are too low — see post below]

As the Taiwan Times reported “Tencent inadvertently released what is potentially the actual number of infections and deaths, which were astronomically higher than official figures“, and were far closer to the catastrophic epidemic projections made by Jonathan Read.

And while the number of cured cases was only 269, well below the official number that day of 300, most ominously, the death toll listed was now 24,589, vastly higher than the 304 officially listed that day. 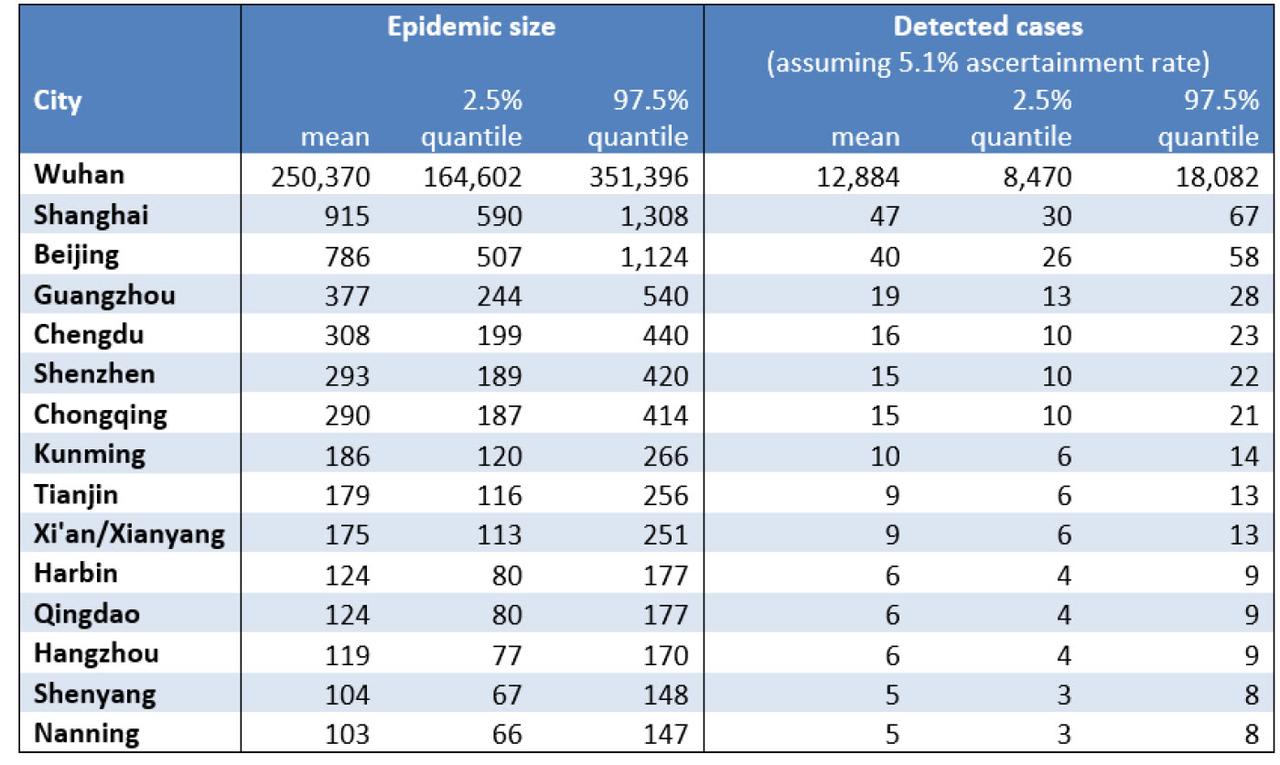 Predicted figures for selected cities up to the 4 Feb 2020. Predictions from Jonathan Read.

Prof. Leung is Dean of the University of Hong Kong’s Medical School. He is also a recognized medical doctor and public health authority.

Leung’s report points out that without strong intervention measures in place, the number of infected people will double every 6.2 days, if the calculation is based on an even more conservative figure of 22,000 infected cases globally at present.

Leung estimates that in Wuhan, the number of newly infected patients will reach the maximum—about 200,000 per day—in April.

In several other cities, including Chongqing, Guangzhou and Shenzhen, the number will peak in May.

Regardless of the true numbers we are still talking about a pandemic with huge human loss within the borders of China.

Shiu criticized the CCP for its cover-up and delay in taking measures to contain the virus, saying the main reason for this catastrophe is the blocking of information.

As a result, those who were infected with the disease were not quarantined in a timely manner.

Chinese authorities initially denied that the disease could be spread via human-to-human transmission.

In addition, for several days, Chinese medical authorities reported very few new cases in Wuhan and no new cases in other Chinese cities, giving the public a false impression that the novel coronavirus was not a threat to public health.

Then on Jan. 20, a leading scientist of China’s Health Commission, Zhong Nanshan, announced at a press conference in Beijing that the disease can spread from human to human.

Wuhan’s mayor subsequently announced a city-wide lockdown on Jan. 23, and quarantined the city on the same day. But millions of people had already left Wuhan for the holiday before Jan. 20, and nearly 300,000 Wuhan residents rushed to escape from the city before the lockdown was executed.

In addition, even after the city-wide lockdown of Wuhan, the central authorities failed to dispatch needed manpower and medical supplies, resulting in things such as corpses lying about on a hospital floor and citizens not being informed about virus prevention, all of which would further spread the virus.

According to Shiu’s insider contact, central authorities at the Jan. 25 Politburo meeting pointed out that the novel coronavirus outbreak poses a serious challenge to the legitimacy of the CCP’s rule. In other words, the CCP is facing a serious crisis and the threat of its total demise.

Shiu said he believes the epidemic, which is now getting out of control, will have “a deadly impact” on China’s economy. In his estimation, more than half of Chinese business activities will come to a halt. Hong Kong will also be affected, he said.

Therefore, the top officials at the political meeting decided to go all out to save the 11 cities from the coronavirus outbreak.

The insider did not give specific reasons as to why the authorities chose those 11 cities, but they are the commercial and military hubs in the country. It is well-known among mainland Chinese that the most developed metros and financial hubs are Beijing, Shanghai, Shenzhen, Guangzhou and Hong Kong; and the military technology centers are Xi’an, Shenyang and Harbin.

Shiu predicted that Shenzhen, a city of about 20 million people that borders Hong Kong, will soon be completely isolated from other Chinese regions.

“There are many high-tech companies in Shenzhen,” he explained. “As for Hong Kong, the city’s government seems to be hesitating. I believe it is because they are waiting for the final instruction from the central government [Beijing],” he said.

Meanwhile, more than 15,000 hospital authority employees in Hong Kong have joined a new union, urging the Hong Kong government to close the border with mainland China. According to the representative of the union, if they do not receive any response from local officials by Feb. 3, members of the union will launch a large-scale strike.

It appears then that China’s Leaders will seek to save 11 Cities at the expense of many others.