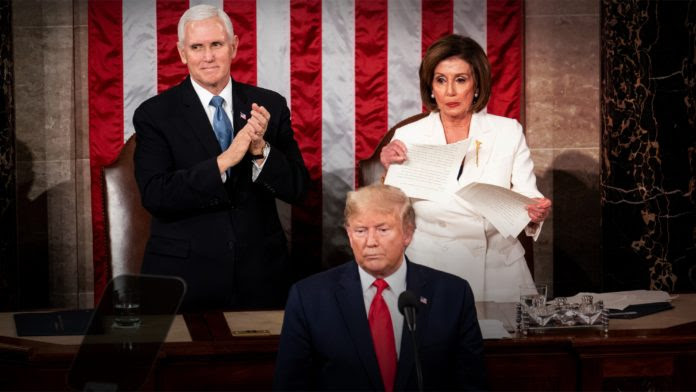 Many are responding following Nancy Pelosi’s “display” at the President’s State of the Union address, where she prominently grabbed the papers of his speech and tore them up, for all the cameras to see.

This year’s State of the Union address seemed to accurately show what state the united states union is in. You had the President, who spoke of the incredible accomplishments of his administration, and how they have strengthened, blessed and protected Americans. Then you had Nancy Pelosi who disrespected the President, stayed seated, shook her head, and tore up his speech.

Franklin Graham was one such person who responded to the Democrats’ behaviour Tuesday night explaining that they revealed their personal resentment, hatred and contempt for the success and heart of America:

What we saw from President Donald J. Trump‘s opposition last night during the State of the Union address felt like a very personal resentment and hatred for the successes of America that had just been spoken of.

How could leaders in Congress be so indignant about good news for the people of this country? Why would they not celebrate people seeing increases in their wages, our military being strengthened, a young girl receiving a scholarship, victories in the fight against ISIS, a military hero reunited with his family, a 100-year-old three-war veteran being honored, and other great news?

It reveals contempt for the heart of America. What’s wrong with these people? As one senator said, “You can tear up the speech, but you can’t tear up the accomplishments.”

Another prominent evangelical, Pastor Jack Hibbs of Calvary Chapel Chino Hills in California, also commented, expressing his shock and reminding viewers that it is not Nancy Pelosi alone who tore up this speech but also all those who voted her into office:

I was at the State of the Union tonight but I did not see this happen until I got back to my hotel room. I was shocked.

By Nancy Pelosi tearing up the president’s speech in public – she was tearing up everything the president had said about women’s rights, Hispanic prosperity, The lowest black unemployment ever, our military being renewed, and our record-breaking economy that is the envy of the world. Not to mention the fact that he said he would defend religious freedom to the end. But wait – The success that he’s making against human trafficking, the young boy who wants to be an astronaut and a 100-year-old man who is a veteran of veterans.

Let’s remember this, it wasn’t just Nancy Pelosi tearing up that speech it was everyone of those people in Northern California who voted for her in her district. She represents their hatred for American excellence and a viral petulance – sick! She’s going to continue to be reelected until some good people in Northern California get their act together and do something – like voting her out.

What a horrific disgrace Nancy Pelosi is and as an American I am ashamed but as a Christian, Pastor and a freedom loving American I stand in opposition to everything she represents.

Proverbs 29:2 [KKJV -“When the righteous are in authority, the people rejoice: but when the wicked beareth rule, the people mourn.”]

Mike Pence, who was next to Pelosi throughout the speech and her subsequent taring of it, in an interview with Fox News said that Pelosi’s actions were “a new low”.

“I think what they got last night was a speech that lifted up the country, that celebrated the incredible progress that we have made in our economy, rebuilding our military, strengthening our courts,” Pence explained. “but the stories that the president told where American stories. I just know that it was a great, great blessing to people all across America. It’s one of the reasons you see the momentum growing behind this President.”

“I have a strong feeling she is going to be the last speaker of the house to sit in that chair for a long time,” he added.

The Hill has reported that Pelosi “trashed” the President’s speech even farther Wednesday morning and explained why she felt it necessary to perform such a dramatic, and attention-seeking display:

“He shredded the truth so I shredded his speech,” Pelosi told House Democrats during a closed-door caucus meeting, according to sources in the room. Like she did the night before, she called his 90-minute address “a manifesto of mistruths.”

“About a quarter through it I thought, ‘You know – he’s selling a bill of goods like a snake oil salesman. We cannot let this stand,’” she said. “So, somewhere along the way realizing what was coming, I started to stack my papers in a way that were tear-able.”

Democrats rallied behind Pelosi and her gesture the night before, erupting in a standing ovation in the meeting, lawmakers said.

527 people are talking about this

Many others also commented on Pelosi’s outburst on Twitter. Amir Tsarfati, founder and president of Behold Israel, said that the state of the union was “so epic and full of truth all it’s left to the forces of darkness is to tear up the speech”.

This “all-consuming hate” Senator Ted Cruz stated, is “not good for our Nation”.

The White House’s Twitter account also explaining on the Social Media platform that Speaker Pelosi is actually guilty of ripping up: “One of our last surviving Tuskegee Airmen. The survival of a child born at 21 weeks. The mourning families of Rocky Jones and Kayla Mueller. A service member’s reunion with his family.”

“That’s her legacy,” they added.

One thought on “Evangelical, Gov. Leaders React to Pelosi Tearing the State of the Union Address”