Even small changes in China have global effects.

Chinese leader Xi Jinping, usually almost omnipresent in the public eye, has been noticeably absent from view in the midst of one of the biggest crises to hit the Chinese Communist Party in recent memory. Today, he finally made an appearance.

State media reported (link in Chinese) that Xi went to Beijing’s Chaoyang district, where he visited a residential community to understand more about their work in fighting the coronavirus. Photos showed him wearing a mask and having his temperature taken.

Video: Chinese President Xi Jinping inspected the #novelcoronavirus pneumonia prevention and control work in Beijing on Monday afternoon. Xi visited residents and staff in a community in Chaoyang District to learn about the situation of the frontline work. http://bit.ly/2uxpzSp 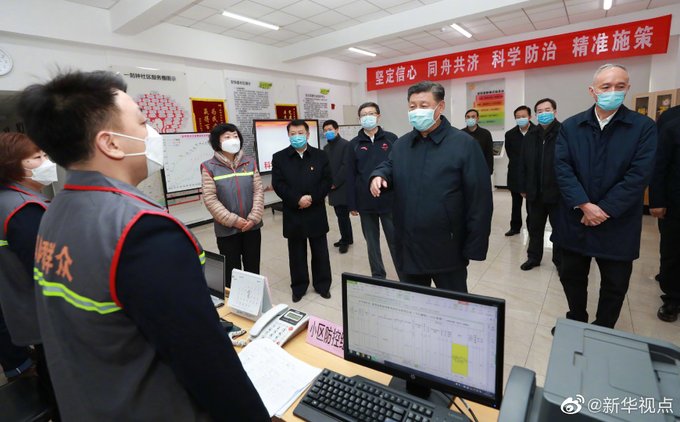 It’s the first public appearance for Xi since he met Cambodian prime minister Hun Sen in Beijing on Feb. 5. Prior to that, he met with the World Health Organization’s director Tedros Adhanom Ghebreyesus on Jan. 28 in Beijing.

In a speech (link in Chinese) marking the Lunar New Year on Jan. 23, days after Chinese authorities said that human-to-human transmission of the virus had occurred, Xi did not mention the coronavirus. On Jan. 24‚ Xi attended a banquet celebrating the new year. That triggered some displays of nostalgia from Chinese citizens who compared Xi’s impersonal approach to that of his predecessor Hu Jintao during the SARS outbreak in 2003, who toured hospitals in Guangdong province, where the disease was discovered.

CCTV news leads with footage of Xi Jinping and other top leaders eating a Lunar New Year banquet in the middle of an outbreak. Meanwhile, people on WeChat getting actually nostalgic for how previous leadership handled SARS

But Xi notably has still not made any visits to Wuhan, the epicenter of the outbreak.

That responsibility has fallen to his deputy, Li Keqiang, who visited the central Chinese city on Jan. 27. Li took a much more hands-on approach than Xi, going to to hospitals and talking directly with front-line doctors and nurses. He also visited a supermarket. Sun Chunlan, the only woman in the party’s 25-member politburo, has also toured Wuhan in recent days.

Xi hasn’t been entirely absent from state media’s narrative, which has started to paint him as a sort of central commander of the government’s efforts to wage “war” on the coronavirus. Sam Crane, an expert on Chinese politics at Williams College in Massachusetts, suggested that Xi’s absence from the limelight implies a strategy of trying to “lay major blame on local cadres” rather than on the core leadership of the Communist Party. Until now, only officials in Wuhan province have been fired or punished for their handling of the coronavirus outbreak.

This, together with Xi dropping out of media spotlight the last few days, suggests a strategy by center to lay major blame on local cadres. https://twitter.com/qingqingparis/status/1224107699735912449 …

The death last week of Li Wenliang, a 34-year-old doctor who first sounded the alarm on the coronavirus and was reprimanded by Wuhan authorities for doing so, is likely to have changed the leadership’s calculus. Faced with a massive outpouring of grief and anger from citizens, authorities at first tried to censor the news of Li’s death and even re-write the facts surrounding his death, though that only had the effect of further inflaming people’s fury, with many even going as far as to demand greater freedom of speech.

Facing potentially its biggest governance crisis in years, the party may now be trying to wrest back control of the narrative. Predictably, it appears to be shifting blame for Li’s death to local officials—China’s ambassador to the UK in an interview with the BBC blamed them for the initial silencing of whistleblowers like Li, and called him a “hero.” And while local officials are apparently bungling management of the crisis, the people’s leader is out to meet the people—just not in Wuhan.

But recent speech by Chinese President Xi Jinping that has been published by state media indicates for the first time that he was leading the response to a new virus outbreak from early on in the crisis.

The publication of the Feb. 3 speech was an apparent attempt to demonstrate that the Communist Party leadership had acted decisively from the beginning, but also opens up the Chinese leader to criticism over why the public was not alerted sooner.

In the speech, Xi said he gave instructions on fighting the virus on Jan. 7 and ordered the shutdown that began on Jan. 23 of cities at the epicenter of the outbreak. His remarks were published by state media late Saturday.

“On Jan. 22, in light of the epidemic’s rapid spread and the challenges of prevention and control, I made a clear request that Hubei province implement comprehensive and stringent controls over the outflow of people,” Xi told a meeting of the party’s standing committee, its top body.

Xi’s role was muted in the early days of the epidemic, which has grown into one of the biggest political challenges of his seven-year tenure.

The disclosure of his speech indicates top leaders knew about the outbreak’s potential severity at least two weeks before such dangers were made known to the public. It was not until late January that officials said the virus can spread between humans and public alarm began to rise.

Zhang Lifan, a commentator in Beijing, said it’s not clear why the speech was published now. One message could be that local authorities should take responsibility for failing to take effective measures after Xi gave instructions in early January. Alternatively, it may mean that Xi, as the top leader, is willing to take responsibility because he was aware of the situation, Zhang said.

Trust in the government’s approach to outbreaks remains fractured after the SARS epidemic of 2002 and 2003, which was covered up for months.

Hubei announced Sunday that all vehicle traffic will be banned across the province, expanding on an existing ban in Wuhan, in another step to try to stop the spread of the virus. Exceptions will be made for vehicles involved in epidemic prevention and transporting daily necessities.

The fall in new cases follows a spike of more than 15,000 announced on Thursday, when Hubei began to include those that had been diagnosed by a doctor but not yet confirmed by laboratory tests.

The roughly 380 Americans aboard the cruise ship docked at Yokohama, near Tokyo, were given the option of taking U.S.-government chartered aircraft back to the U.S., where they would face another 14-day quarantine. Those going were to begin leaving the ship Sunday night. People with symptoms were to be banned from the flights.

The Japanese defense ministry said around 300 of the Americans were preparing Sunday night to leave on buses to take them to Tokyo’s Haneda Airport.

The U.S. Embassy in Tokyo said Washington was evacuating the Americans because the passengers and crew members on board the Diamond Princess were at a high risk of exposure to the virus.

About 255 Canadians and 330 Hong Kong residents are on board the ship or undergoing treatment in Japanese hospitals. There are also 35 Italians, of which 25 are crew members, including the captain.

Malaysia said it would not allow any more passengers from another cruise ship to transit the country after an 83-year-old American woman from the MS Westerdam tested positive for the virus.

She was among 145 passengers who flew from Cambodia to Malaysia on Friday. Her husband also had symptoms but tested negative. The Westerdam was turned away from four ports around Asia before Cambodia allowed it to dock in Sihanoukville late last week.

Malaysian Deputy Prime Minister Wan Azizah Wan Ismail said that her country would bar cruise ships that came from or transit any Chinese ports from docking.

Cambodia said earlier that all 1,455 passengers on the Holland America-operated ship had tested negative for the virus.