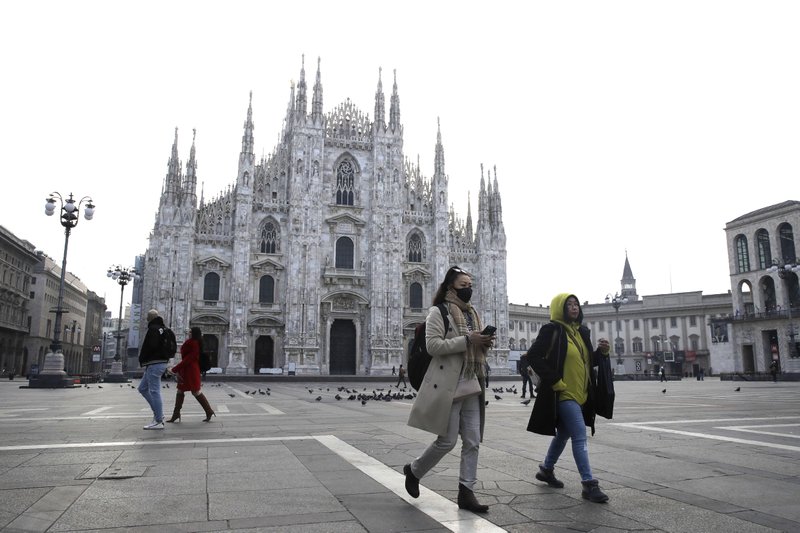 A woman wearing a sanitary mask walks past the Duomo gothic cathedral in Milan, Italy, Sunday, Feb. 23, 2020. A dozen Italian towns saw daily life disrupted after the deaths of two people infected with the virus from China and a pair of case clusters without direct links to the outbreak abroad. A rapid spike in infections prompted authorities in the northern Lombardy and Veneto regions to close schools, businesses and restaurants and to cancel sporting events and Masses. (AP Photo/Luca Bruno)

By LUCA BRUNO and FRANCES D’EMILIO14 minutes ago

CODOGNO, Italy (AP) — Italy stepped up measures Sunday to ban public gatherings amid rapidly rising numbers of COVID-19 cases in the country and a third death from the virus, calling off the famed Venice Carnival attended by thousands of revelers.

The decision to call off the Carnival was announced by Veneto regional Gov. Luca Zaia as the numbers of confirmed coronavirus cases soared to 152, the largest number outside Asia.

“The ordinance is immediately operative and will go into effect at midnight,″ said Zaia, whose area includes Venice, where thousands packed St. Mark’s Square. Carnival would have run through Tuesday.

Buses, trains and other forms of public transport — including boats in Venice — were being disinfected, Zaia told reporters. Museums were also ordered to shut down after Sunday in Venice, a top tourist draw anytime of the year.

Authorities said three people in Venice have tested positive for the COVID-19 virus, all of them in their late 80s and who are hospitalized in critical condition. Zaia said among those infected was a nurse.

Nearly all of Italy’s 152 confirmed cases are clustered in the north, with 110 in Lombardy and others in the regions of Veneto, Emilia-Romagnia and Piedmont. Only two cases have been found in the south, a Chinese couple in Rome earlier this month.

The death on Sunday of an elderly woman, who was already suffering from cancer and who contracted the virus, raised the nation’s death toll to three, said Lombardy regional official Giulio Gallera. All three deaths occurred in the north.

Authorities expressed frustration that they haven’t been able to track down the source of the virus spread in the north, which surfaced last week when an Italian man in Codogno, in his late 30s, became critically ill.

At first, it was widely presumed that the man was infected by an Italian friend he dined with and who recently returned from his job, based in Shanghai. When the friend tested negative for the virus, attention turned to several Chinese who live in town and who frequent the same cafe visited by the stricken man. But Lombardy Gov. Attilio Fontana told reporters all of those Chinese have tested negative too.

So for now, Borrelli indicated, the strategy is to concentrate on closures and other restrictions to try to stem the spread in the country, which already had taken such measures early on in the global virus alarm, including banning direct flights from China, Hong Kong, Taiwan and Macau. Italy has also tested millions of airport passengers arriving from other places for any signs of fever.

In Lombardy, the hardest-hit region with 90 cases, schools and universities were ordered to stay closed in the coming days, and sporting events were canceled. Lombardy’s ban on public events also extended to Masses in churches in the predominantly Roman Catholic nation.

But while public Masses were forbidden in some towns in the hardest-hit areas, and later, by the Catholic patriarch of Venice, thousands turned out in the southern port city of Bari for a Mass by visiting Pope Francis, who shook hands with the faithful during his public appearance. Among those shaking the pope’s hand in Bari was Italian President Sergio Mattarella, who came to Bari for the event.

Museums, schools, universities and other public venues will be shut as well in Venice and the rest of Veneto. The shutdown is expected to last at least through March 1.

In Turin, the main city of the northern Piedmont region, a least three cases were diagnosed. That region also announced the closure of all schools and universities.

The biggest jump in confirmed cases of COVID-19 was reported by authorities in Lombardy, a populous region which includes the country’s financial capital, Milan. Nearly all the cases were in the countryside, mainly in Codogno and nine neighboring towns, where only grocery stores and pharmacies were apparently allowed to stay open while other businesses were ordered shuttered and people — in theory at least — weren’t supposed to enter or leave the towns.

Melissa Catanacci, who lives on one of Codogno’s main roads, said that while entry points were open, others were closed.

Speaking by telephone from her home, she said she ventured outside for a stroll in the morning along with her husband and two children, ages 10 and 13.

“Every quarter-hour or so a car goes by” on the main road, she said. With businesses closed, the usual Sunday “passeggiata″ — a leisurely stroll through local streets — didn’t last very long, she said. ”Nothing is open,” not even the town supermarket despite permission to do so, she said. “After a half hour, one turns around and goes back home.”

With school to stay shut through the week, her children were visiting other friends’ houses and vice versa, she said, to break the boredom.

Italians’ other cherished Sunday routines – from soccer to church-going – were being touched by the spread of the contagion, almost entirely based in the north. Sports events in the affected northern areas, from local children’s sports team practices to three Serie A soccer matches, were canceled following a long meeting Saturday night by the Italian government to decide infection-containing measures.

England’s chief medical officer says four Britons who had been aboard the Diamond Princess cruise ship have tested positive for COVID-19. The four were among 32 U.K. and Irish nationals flown back to Britain on Saturday from the ship, which has been struck under quarantine in Japan. Chief Medical Officer Chris Whitty said Sunday that the four were being transferred to a specialist infection center and were believed to have contracted the virus aboard the ship.

Britain now has 13 confirmed cases of the new coronavirus.

Italy’s explosion of infections was sparking concern elsewhere in Europe.

Austria’s top security official, Franz Lang, said that the country could activate border controls to Italy within one hour. Normally both countries are part of the visa and passport-free Schengen zone, but in specific situations, single countries can reactivate border controls. Lang said the situation would be discussed in meetings Monday, local Austrian media reported.

In Switzerland, which like Austria borders Italy, there was a call for calm.

“The news from Italy is worrisome … but it is too early to think that a wave is rolling our way,” Daniel Koch, the head of the department for contagious diseases at the heath office, told the SRF public broadcaster

German travelers returning from northern Italy were being asked to check the official German health advisories online regarding possible exposure to the virus. The German health ministry said it had initiated a phone conference for all European Union public health authorities about the outbreak in northern Italy on Monday.

Italy’s first cases — that of a married Chinese couple who were on vacation in Rome — surfaced in early February.

Elsewhere in Europe, French Health Minister Olivier Veran said that authorities were getting ready for a possible outbreak in France of the new virus. In an interview published Sunday in French newspaper Le Parisien, he said he was monitoring very closely the “very serious” situation, including in neighboring Italy.

France reported earlier this month the first death outside Asia of a person infected with the virus, an 80-year-old Chinese tourist.