Thousands of people have been filmed queuing up to buy face masks in the city at the centre of South Korea‘s coronavirus outbreak.

A long line of people snaked out the doors of a supermarket in the city of Daegu on Monday as people tried to protect themselves against the spread of the disease amid fears of a global pandemic.

South Korea now has the largest number of confirmed cases outside of mainland China after infections spiked at the weekend, standing at 830 by Monday morning. 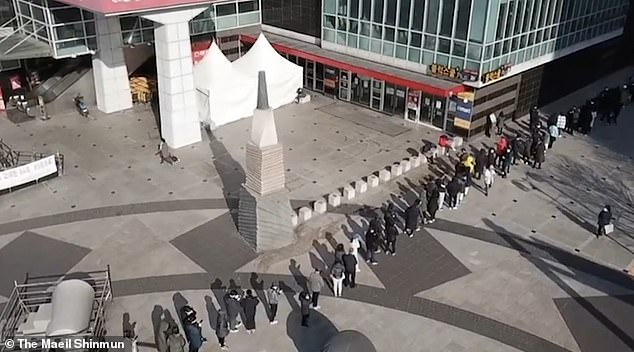 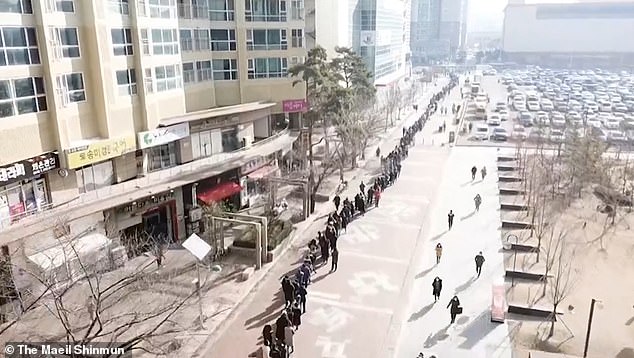 Eight people have also died from the disease in the Asian country.

The astonishing scenes outside the supermarket were captured by South Korean newspaper Maeil Shinmun.

More than 140 of South Korea’s new cases were in and near Daegu, the city of 2.5 million people where most of the country’s infections have occurred.

Five of the deaths were linked to a hospital in Cheongdo, near Daegu, where a slew of infections were confirmed among patients in a psychiatric ward.

While officials have expressed hope they could contain the outbreak to the region surrounding Daegu, some experts noted signs of the virus circulating nationwide.

They pointed to a number of cases in the capital, Seoul, and elsewhere that were not immediately traceable.

‘In Daegu, the number of new cases that are being confirmed by tests is quite large, and if we fail to effectively stem community transmissions in this area, there would be a large possibility (that the illness) spreads nationwide,’ South Korean vice health minister Kim Gang-lip said. 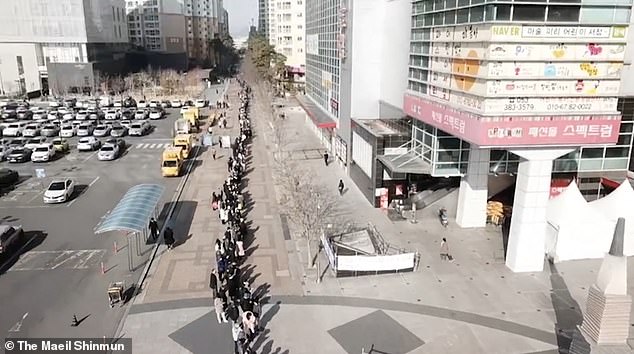 South Korea confirmed 830 cases of the virus on Monday along with eight deaths, marking the highest number of infections outside of mainland China 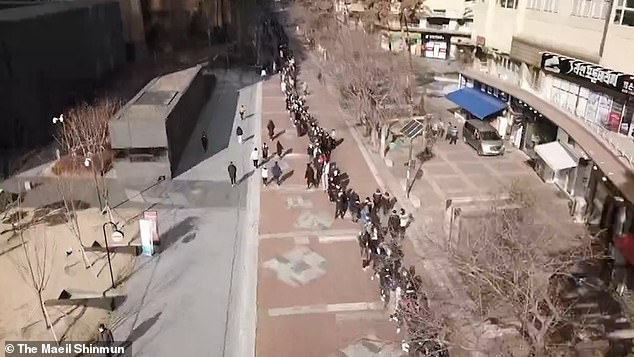 Experts warned of a global pandemic after a surge in the number of coronavirus cases at the weekend, with the disease spreading in South Korea (pictured), Italy and Iran

He said that health officials plan to test all of the city’s residents exhibiting cold-like symptoms, which he said would be about 28,000 people.

Health workers are also screening some 9,000 followers of the Daegu branch of the Shincheonji Church of Jesus, where a woman in her 60s attended two services before testing positive for the virus.

Of the country’s 161 new cases, 129 were related to the church. Officials are also investigating a possible link between churchgoers and the spike in infections at a hospital in nearby Cheongdo.

Worldwide, cases have now topped 80,000 with more than 2,600 deaths as experts warned the globe is on the brink of a pandemic.

A pandemic occurs when the same disease threatens different parts of the globe simultaneously.

Until this weekend, the spread of coronavirus had been largely isolated to mainland China, with most foreign cases being linked to travellers from the country. 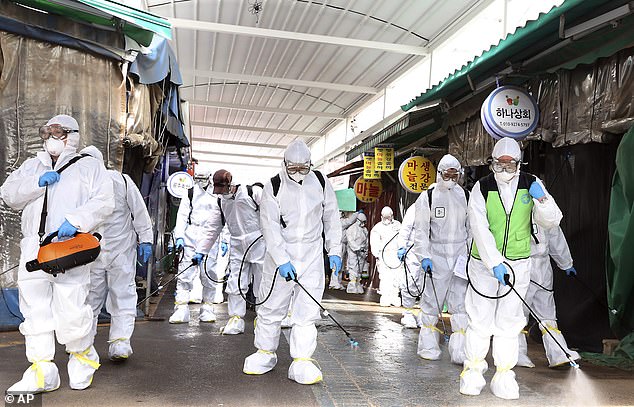 Workers wearing protective suits spray disinfectant as a precaution against the coronavirus at a market in Bupyeong, South Korea 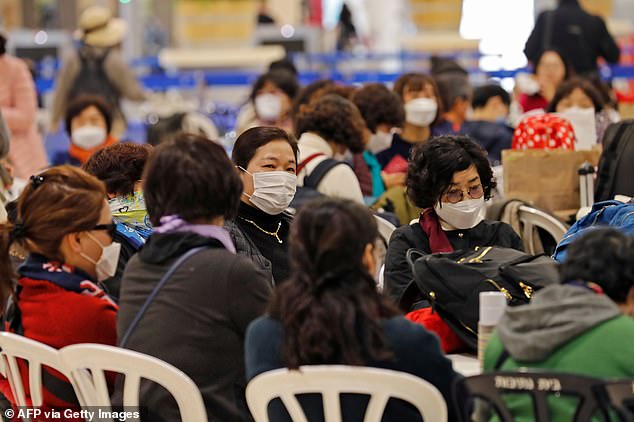 Israel on February 22 refused to allow some 200 non-Israelis to disembark from a plane which arrived from South Korea, as part of measures against the new coronavirus

But a wave of infections in northern Italy – which has been placed on lockdown – and in Iran, where 50 deaths were reported Monday, suggested the disease was spreading freely elsewhere.

Kuwait confirmed its first cases on Monday in three people who had travelled from Iran, while Bahrain and Iraq reported their first cases, also linked to Iran.

A number of countries have closed their borders with Iran or effectively barred travellers from there, a similar step to the actions numerous countries have taken to ward off the spread of the illness from China.

On Monday, Italy’s northern Lombardy region, which includes the nation’s financial capital, Milan, reported the death of the fourth victim. 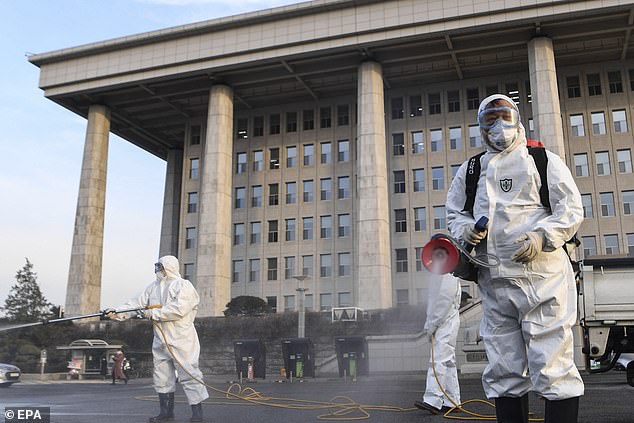 Authorities said they had registered 38 more cases beyond the 152 reported nationwide late on Sunday, bringing Italy’s total to at least 190.

Venice, which is full of tourists for carnival events, reported its first two cases.

As Italy scrambled to check the spread of the virus, authorities announced that all carnival events had been called off as well as major league football matches in the stricken region.

Warning that China’s virus epidemic is ‘still grim and complex,’ President Xi Jinping called for more efforts to stop the outbreak, revive industry and prevent the disease from disrupting spring planting of crops.

Mr Xi defended the ruling Communist Party’s response as ‘timely and effective’ in a video conference with officials in charge of anti-disease work, according to the official Xinhua News Agency.