Precautions put in place to slow the rise of coronavirus cases in New Orleans has inadvertently led to a rat problem for the Louisiana city.

With restaurants closed save for take-out service, far less food waste is being discarded in the city’s alleyways, driving the local rodent population out into the open to search for scraps.

New Orleans’ famous Mardi Gras celebration brought thousands of tourists to the city, and medical experts believe it might be a big factor in the city’s COVID-19 outbreak. Now with Bourbon Street’s famous bars all closed and people social distancing, videos show dozens of rats scurrying through the empty streets.

“I turn the corner, there’s about 30 rats at the corner, feasting on something in the middle of the street,” one local restauranteur told CBS News’ Omar Villafranca. He said he had “never” seen anything like it before.

Claudia Regal, head of the local pest control board, expressed concern about the possible infections the rat infestation could spread to the local homeless population.

“There are pathogens in these rodents. Fortunately, we don’t see many of the health outcomes. We don’t have very many disease cases that are actually related to rodents. But the potential is there,” she said during a press conference.

She called it a “difficult time to be a rat” due to the limited availability of food scraps.

Health experts say it’s no surprise that New Orleans is the center of the coronavirus crisis in hard-hit Louisiana after over a million people flocked to the city to celebrate Carnival for more than a month, culminating in Mardi Gras at the end of February. Gov. John Bel Edwards requested a Major Disaster Declaration for the state Tuesday as the number of cases rose to 1,388 in 43 of Louisiana’s 64 parishes, according to the state’s Health Department.

At least 46 people have died.

“It is still impossible to know exactly how long the COVID-19 pandemic will impact Louisiana, but what we do know is that we have more cases per capita than every state, except for New York and Washington,” Edwards said Tuesday. On Sunday, he issued a stay-at-home order to slow the rapid rise of cases.

While some parishes appear to be unaffected, Edwards said testing just hadn’t caught up. “We shouldn’t delude ourselves. It’s in every single parish,” he said.

But New Orleans, with 567 of the state’s cases — 20 that led to death — is by far the center of the pandemic in the state. At least nine of the people who died resided at Lambeth House, a New Orleans retirement home and nursing facility.

Doctors and residents think the Carnival, which ran from Jan. 6 to Fat Tuesday on Feb. 25 this year and draws about 1.4 million revelers from around the world, could have contributed to the outbreak in New Orleans and all of Louisiana’s parishes.

#NewOrleans has one of the HIGHEST #COVID19 #coronavirus infection rates in the country. It is not time to relax, it’s time to be vigilant. 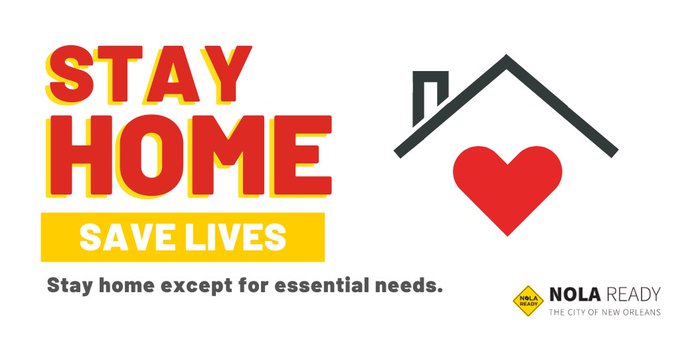 “I think it came during Mardi Gras, given the timing of it. Someone brought it here and then it starts spreading slowly,” Dr. Joshua Denson, a pulmonary and critical care physician at Tulane Medical Center in New Orleans, told NBC News.

“I diagnosed the second case, the first critically ill patient, here last weekend,” he said. “Her timing was about two weeks post-Mardi Gras.”

The incubation period for the coronavirus, the time between when a person contracts the virus and starts to show symptoms, is two to 14 days, according to the Centers for Disease Control and Prevention.

“This is a very important point for the American public — what we’re seeing in the hospitals now are people who most likely got exposed and sick more than two weeks ago, so you’re seeing what was occurring two and three weeks ago,” Dr. Deborah Birx, the White House’s coronavirus response coordinator, echoed on NBC’s “TODAY” show Tuesday.

“People are really packed close together, especially for some of the big parades in the downtown section and really all along the route. There are a lot of opportunities for close contact and transmission,” Oberhelman said.

Most parades attract thousands of people and run routes that are about five miles long.

“During Mardi Gras, people were not thinking about social distancing or hand-washing,” Oberhelman added.

Evangeline Turner, a New Orleans bartender, said many Bourbon Street hospitality workers are also speculating that the Carnival parades and festivals contributed to the high number of coronavirus cases.

“There’s no way that can’t be a reason,” she said.

Now, bars and restaurants are closed, and the city’s next massive party, the New Orleans Jazz and Heritage Festival, has been postponed. Mayor LaToya Cantrell even ordered basketball hoops removed from city facilities Sunday because people were still out on the courts.

“I don’t know how you can guard a man with social distancing,” she said. “It doesn’t work.”

(Natural News) As part of the efforts to slow down the spread of the coronavirus, a number of large events and gatherings has been canceled. Now, a new study shows just how important this step is in the battle to stop the global pandemic.

Eighty percent of travelers who sought medical help after returning home from a public event were afflicted with respiratory illnesses, reported the study, which appeared in the journal Travel Medicine and Infectious Disease. It also revealed that a good portion of their diagnoses turned out to be either influenza or pneumonia.

The researchers conducted the study by looking at data from people who had traveled to various large events all over the world between 2015 and 2019 — long before the coronavirus pandemic began. Aside from looking at the types of illnesses these travelers had caught, the researchers also looked at the kinds of events these people had attended.

Using data gathered by the International Society of Travel Medicine’s GeoSentinel network, the researchers identified 266 people who had traveled to 28 different countries between August 2015 and April 2019.

Of the nearly 300 selected cases, 236 were diagnosed with a respiratory disease, 26 percent of which was influenza and 20 percent was pneumonia. Next to respiratory problems, gastrointestinal illnesses came in second but represented only 4.5 percent of the diagnoses. Most of the travelers, 63 percent to be exact, had visited a healthcare provider before they went abroad.

The researchers also noted that the majority of the ill travelers (over 82 percent) attended religious mass gatherings, while the rest went to sporting events, cultural or entertainment events, or conferences.

Umrah and Hajj, both of which are pilgrimages to some of Islam’s holiest sites, were the two most attended religious mass gatherings. The researchers found that 64 percent of the travelers who attended either event and got ill ended up requiring hospitalization. One death was associated with this.

The World Scout Jamboree was another mass gathering that resulted in many people becoming ill. The 23rd iteration of the event, which was held from July to August of 2015, was responsible for 6.5 percent of all the sick traveler cases included in the study.

In contrast, the 2016 Summer Olympics was responsible for only nine cases. The researchers believe that the travelers had caught their illnesses while they were traveling, and not while attending these events.

They also said that their data highlights the importance of consulting with a healthcare professional before traveling to public events. Getting a check-up before you leave can help stop you from spreading an infectious disease you may have contracted without your knowledge, especially if you’re not showing any symptoms.

Mass gatherings suspended around the world

Even before the study was published, mass gatherings and sporting events around the world have already been suspended. The Kingdom of Saudi Arabia suspended the year-round Umrah pilgrimage earlier this month. The umrah — which can be undertaken at any time of the year unlike the Hajj — draws millions of pilgrims to Saudi Arabia each year. In addition to this, the kingdom has also barred visitors from entering the Prophet’s mosque in Medina.

Major sporting events and leagues around the globe have also followed suit. Some, like the NBA, NHL, NASCAR and Formula 1, have suspended the remainder of their seasons. Most notably, the International Olympic Committee (IOC) has decided to delay the 2020 Summer Olympics in Tokyo by a year. However, some massive events, such as the WWE’s WrestleMania, are still set to take place, but will happen without crowds to ensure public safety.

Despite the data showing that mass gatherings help spread the coronavirus, not everyone is avoiding them. Just last week, thousands of students ignored public health warnings to go on their annual spring break pilgrimages to beaches in Miami.

Now, as Florida experiences a surge in coronavirus cases, many spring break revelers are now expressing regret for their actions, as they either worry about being asymptomatic carriers or have actually come down with the disease.