Whenever a Democratic politician controls the purse strings, money is no object for pet causes that can be funded to effectively buy votes. When it comes to mundane, necessary expenditures such as preparing for a pandemic, however, Democrats suddenly become the biggest skinflints.

The coronavirus pandemic is laying bare all kinds of government failures, not the least of which is state governments that had the chance to prepare for the eventuality of a pandemic but refused.

One such example is in the state of California which previously had the supplies and government infrastructure ready to deal with a pandemic but ultimately dismantled it.

Current California Democratic Gov. Gavin Newsom spoke in front of the navy hospital ship Mercy on Friday about the importance of making “good decisions” in the effort to stop the spread of coronavirus, which has so far sickened 7,477 and killed 150 in the state, according to Johns Hopkins.

“It’s our capacity, individual capacity, to continue to make good decisions on physical distancing and continue to maintain our strict standards in the state of CA — standards as it relates to our stay-at-home orders that we must continue to advance,” Newsom said.

Office of the Governor of California

“It’s our capacity, individual capacity, to continue to make good decisions on physical distancing and continue to maintain our strict standards in the state of CA — standards as it relates to our stay-at-home orders that we must continue to advance.” – Governor @GavinNewsom 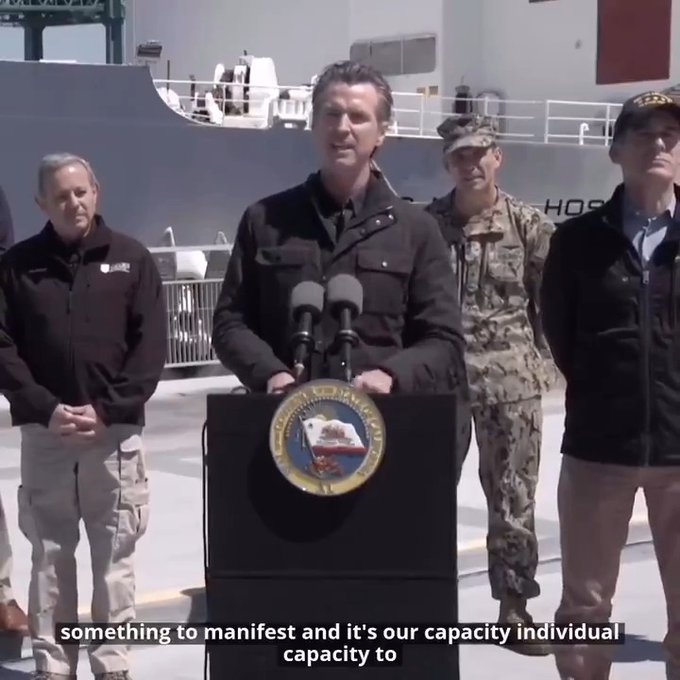 Despite the reassuring optics, what Newsom does not say is that his state is facing a crisis for which they are woefully unprepared despite the work of previous administrations.

According to the Los Angeles Times, beginning in 2006 when Republican Gov. Arnold Schwarzenegger was in office, the state put millions of taxpayer dollars into disaster preparedness, citing the state’s vulnerability to natural disasters such as earthquakes as well as possible flu pandemics and bioterrorism.

“In light of the pandemic flu risk, it is absolutely a critical investment,” Schwarzenegger stated during a news conference at the time. “I’m not willing to gamble with the people’s safety.”

The state spent the next several years and over $200 million dollars stockpiling medical supplies and preparing mobile hospital units in the event of a natural or widespread medical disaster.

Included in the stockpile were supplies that would be useful during the current coronavirus pandemic, such as protective masks and ventilators. The three mobile hospital units would have had the capability of treating 600 COVID-19 patients at a time. The total amount of medical equipment and supplies was enough to provide an additional 21,000 hospital beds over and above the mobile units.

All of that would have been very useful right now, but instead California coronavirus patients today are out of luck. When Democratic Gov. Jerry Brown took over, he slashed state funding required to maintain the stockpile and mobile hospitals, hoping to make up for a $26 million budget shortfall.

The supplies were disbursed free of charge to hospitals which meant no funding was collected to pay to replenish them. Whatever wasn’t distributed from the stockpile or used up during wildfire outbreaks was left to expire, including masks from the state’s stockpile of 50 million. It would have cost around $5.8 million to maintain the existing stockpile, but when coronavirus hit, the number of masks was down to 21 million.

Even after the state budget turned around, with some years ending with a budget surplus in the billions, disaster preparedness and pandemic readiness were not revived.

But after destroying the state’s ability to deal with a pandemic like coronavirus, one project Brown had no problem continuing to dump taxpayer dollars into was the money pit known as the California High-Speed Rail project.

The railroad was meant to connect Los Angeles to San Francisco, but Forbes reported that the colossal failure, which remains unfinished at present, carried a hefty price tag of $100 billion. Under President Donald Trump, federal funding for the fiscal disaster was revoked.

This year, California is on track to enjoy a $7 billion surplus for the 2020-2021 budget year, according to a November report from the Sacramento Bee, but the state seems more interested in allocating money anywhere but emergency preparedness.

Currently, Newsom has no trouble opening public coffers to give illegal immigrants free healthcare even as his administration refuses to cooperate with the federal government to curb the influx of illegal immigration in the first place.

Robby Starbuck, a Cuban American director and producer who shuns leftism because of its impact on his home country, summed up the frustration with this kind of government spending on those who aren’t even in the country lawfully.

“How do citizens living in California feel about their taxes paying for illegal immigrant’s healthcare? Thoughts?” he tweeted. “As someone who left the state in 2019 it just reminds me why I left, it’s not our job to subsidize the lives of foreign nationals who entered the U.S. illegally.”

How do citizens living in California feel about their taxes paying for illegal immigrant’s healthcare? Thoughts? As someone who left the state in 2019 it just reminds me why I left, it’s not our job to subsidize the lives of foreign nationals who entered the U.S. illegally. https://twitter.com/ab_ibarra/status/1215703907940229120 …

Big: #CABudget proposes $80.5 million to expand Medi-Cal to undocumented seniors, 65 and over.

The government of California had the chance to remain pandemic-ready long before coronavirus even surfaced, but instead simply squandered it. Now that the state is facing the crisis head-on, their failure is shockingly apparent.

As the old adage often attributed to Benjamin Franklin rings true for California: “If you fail to plan, you are planning to fail!”

This article appeared originally on The Western Journal.

One thought on “California Had 21,000 Emergency Hospital Beds Thanks to GOP Gov, But Democrats Cut Them and Never Replaced”