By CHRIS PLEASANCE FOR MAILONLINE

Tedros Adhanom Ghebreyesus, a little-known figure before the coronavirus pandemic, has risen to prominence as Director-General of the World Health Organisation which is spearheading global responses to the virus.

Dr Tedros – who has never practised as a medical doctor – is a career politician who was born in what is now Eritrea, began work under the Communist Derg junta, came to study in the UK, then rose to the top of Ethiopia’s government first as Health Minister and then Foreign Minister before being elected to lead the WHO in 2017.

He is now facing heavy criticism over his handling of the pandemic, especially for praise he heaped on China‘s communist party for its response – hailing the regime’s ‘commitment to transparency’ and saying the speed with which it detected the virus was ‘beyond words’.

That has led to allegations – mostly recently made by Donald Trump – that the WHO is ‘China-Centric’, a position that the US President has promised to ‘look into’.

Trump has threatened to suspend US funding to the WHO until an investigation has been carried out, while suggesting that they withheld information on the virus.

Indeed, it is not the first time that Dr Tedros has been accused of cosying up to China. Shortly after his election victory in 2017, it was alleged that Chinese diplomats had been heavily involved in lobbying for him.

UN records also show that Chinese contributions to both Ethiopia’s aid budget and the WHO have substantially increased during times when he was in top leadership positions. 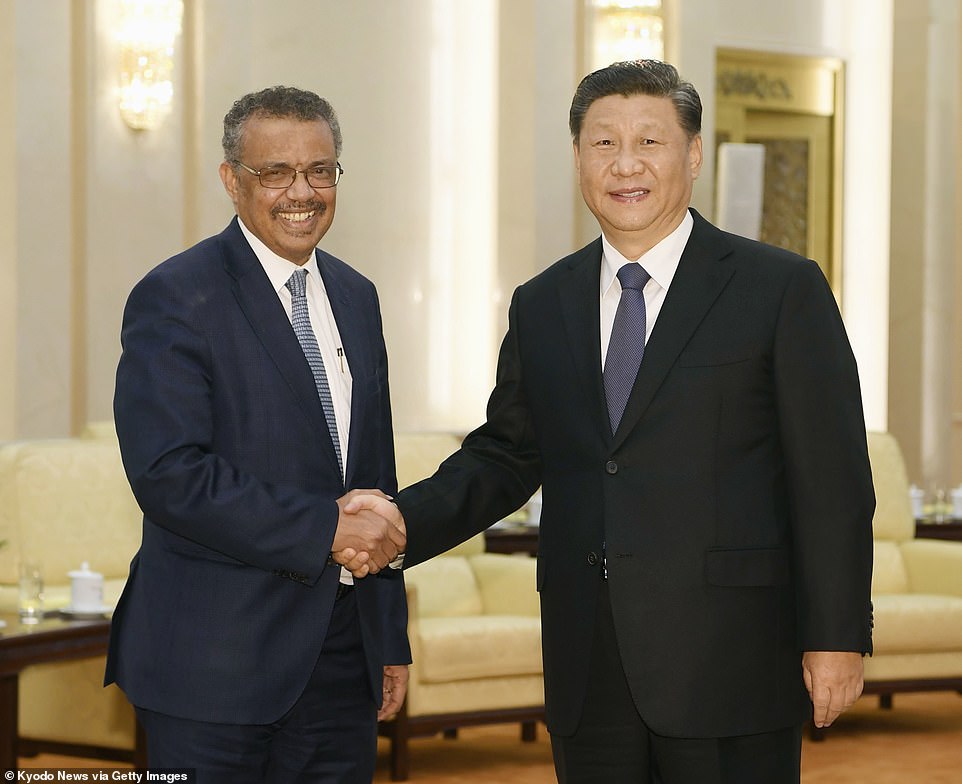 The WHO and its Director-General Tedros Ghebreyesus (left, pictured meeting with Xi Jinping in January) has faced accusations that the organisation is ‘China-centric’ and has been too quick to praise the regime’s coronavirus response 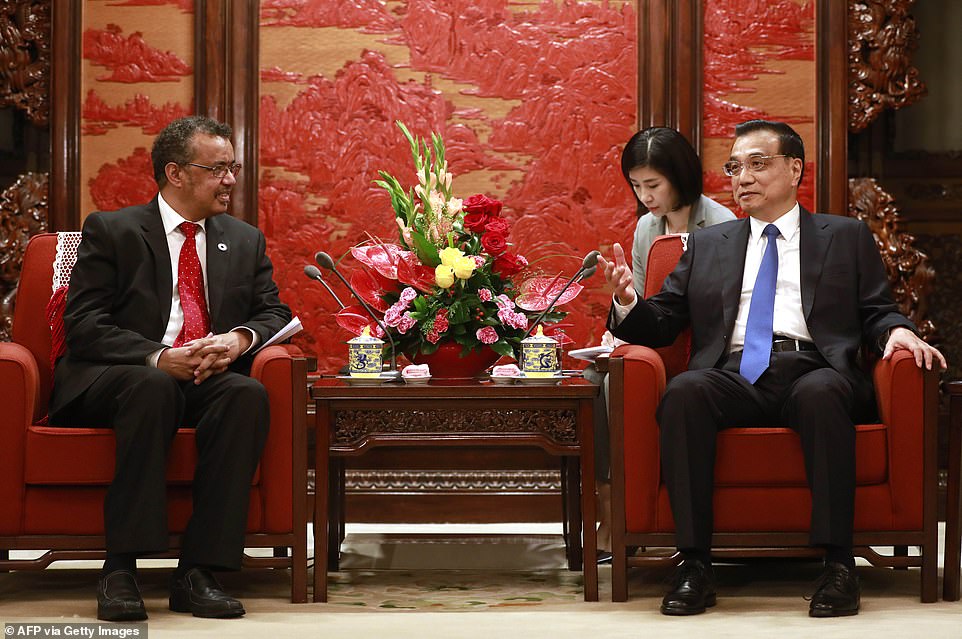 Dr Tedros (left) became the first African head of the WHO and the first non-medical doctor to hold the role when he was elected in 2017, amid allegations of heavy lobbying by China (pictured, Dr Tedros in Beijing shortly after his election)

Shortly after his election to the WHO, a report in The Times said: ‘Chinese diplomats had campaigned hard for the Ethiopian, using Beijing’s financial clout and opaque aid budget to build support for him among developing countries.’

Dr Tedros – who is married and has five children – was born in 1965 in Asmara, which was part of Ethiopia at the time but is now in Eritrea.

As a child he saw his younger brother die to an infection, which he believes was measles, which he later said spurred his determination to work on health and health policy.

He graduated from university in Ethiopia in 1986 with a degree in biology and went to work as a health official in the regime of Marxist dictator Mengistu Haile Mariam, while the country was ruled by the Derg military junta.

According to the BBC, Dr Tedros then joined the hard-left TPLF – which started life as a Communist party and played a major role in overthrowing Mariam in 1991. It later became part of the EPRDF, a coalition of left-wing parties that ruled Ethiopia until last year.

Around the same time as Mariam’s ouster, Dr Tedros left Ethiopia and came to the UK where he studied at the London School of Hygiene & Tropical Medicine, graduating with Masters of Science in Immunology of Infectious Diseases in 1992.

He then went on to study at the University of Nottingham, where he received a PhD in community health in 2000.

After this, he returned to Ethiopia where he joined the health ministry and rose through the ranks from regional health minister all the way to national Minister for Heath – a position he took up in 2005.

During his tenure, which lasted until 2012, he was widely praised for opening thousands of health centres, employing tens of thousands of medics, bringing down rates of HIV/AIDS, measles and malaria, as well as bringing information technology and the internet into the heath system. 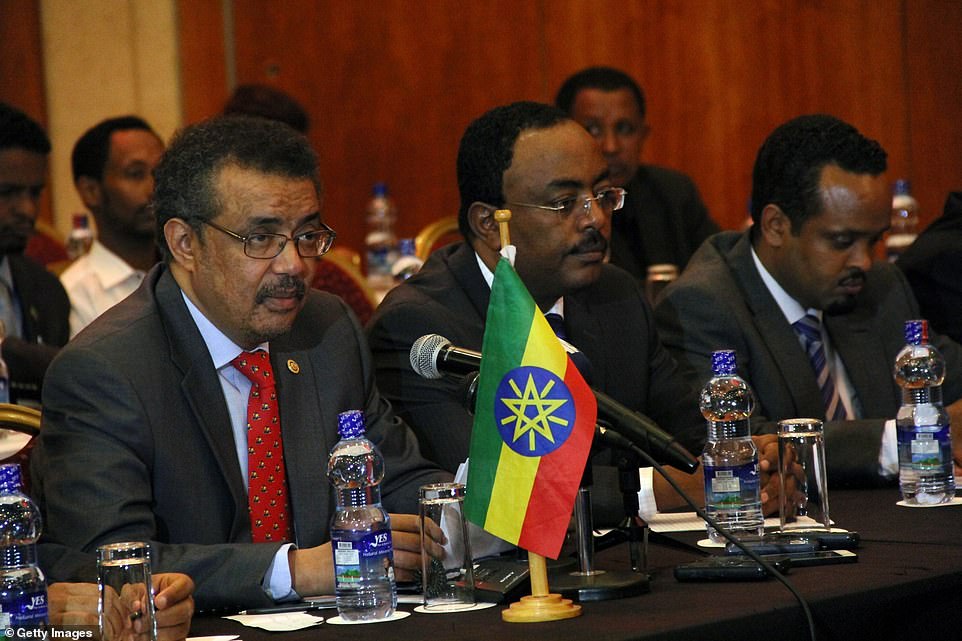 Before ascending to the top ranks of the WHO, Dr Tedros studied in the UK and served Ethiopia’s ruling left-wing coalition as health minister and then as foreign minister (pictured in the role in 2015) 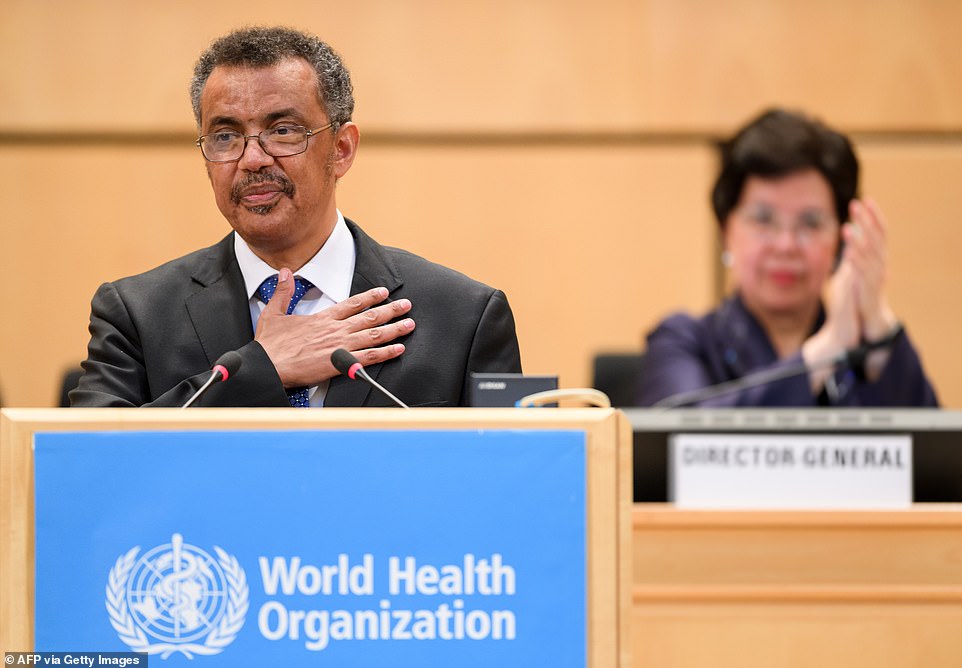 Dr Tedros was the first WHO head elected by member states, winning the ballot by a reported 133 votes to 50, with the near-unanimous backing of African states

In November 2012 he was promoted to Foreign Minister, and was widely hailed for helping to negotiate a boost in UN funding for Ethiopia, including as part of the Addis Ababa Action Agenda.

Indeed, UN funding records show that around this time the country received millions in additional funding – including from China, which had previously given little or nothing to support the country.

In 2015 and 2016 China gave some $16million to Ethiopia in spending commitments and cash contributions, largely in support of food or refugee programmes.

In 2011, just before Dr Tedros took up the role, and in 2017, just after he left, China handed over another $44million in commitments and contributions.

In 2017, Dr Tedros left the Ethiopian government and entered the running for Director-General of the WHO as the tenure of Dr Margaret Chan, a Canadian-Chinese physician, was coming to an end.

The election was the first to take place under a system of polling all UN member states as part of a secret ballot. Previously, leaders were chosen by a closed-door vote of an executive committee.

Eventually the field was boiled down to two candidates – Dr Tedros and Briton Dr David Nabarro, a life-long physician who had helped lead UN responses to previous outbreaks including bird flu, the cholera outbreak in Haiti, and the Ebola outbreak in West Africa.

Dr Tedros won the ballot by a reported 133 votes to 50, becoming the first African leader of the WHO and the first non-medic to hold the role. His victory came in part thanks to 50 out of 54 African states voting for him.

However, he quickly mired himself in controversy by recommending African dictator Robert Mugabe as a WHO Goodwill Ambassador, amid allegations he trying to repay favours granted during the election.

Dr Tedros quickly embroiled himself in controversy at the WHO by trying to appoint African dictator Robert Mugabe (pictured at a conference together in 2017, the year of the appointment) but eventually bowed to pressure and dropped it

There were reports that the move was also intended to reward China, a long-time supporter of Mugabe, for using its influence to have him elected.

The Times added: ‘China has praised the authoritarian development model of Ethiopia’s regime, which rules under emergency powers and has put down pro-democracy protests.’

During the 2017 election itself, several groups within Ethiopia opposed Dr Tedros’s appointment due to his links with the TPLF and allegations that they stifled journalists and repressed minorities.

Dr Tedros was also accused of covering up three separate cholera outbreaks in 2006, 2008 and 2011 by mis-reporting it as ‘watery diarrhea’, allegations he dismissed as a ‘smear campaign’ by his British rival.

Following his election to the WHO, Dr Tedros vowed to reform the organisation by placing an emphasis on universal healthcare at its centre while also increasing funding.

Further UN funding records show that, during his tenure, assessed contributions to the WHO by China have also risen significantly – from roughly $23million in 2016 to $38million in 2019.

China has also committed to a further $57million in funding in 2020, though has yet to pay the balance.

Meanwhile funding from other major world economies – including the US, Russia, Japan and Germany – has remained largely flat or even fallen over the same period.

Assessed contributions make up only around a quarter of the WHO’s budget, the rest of which comes from donations. 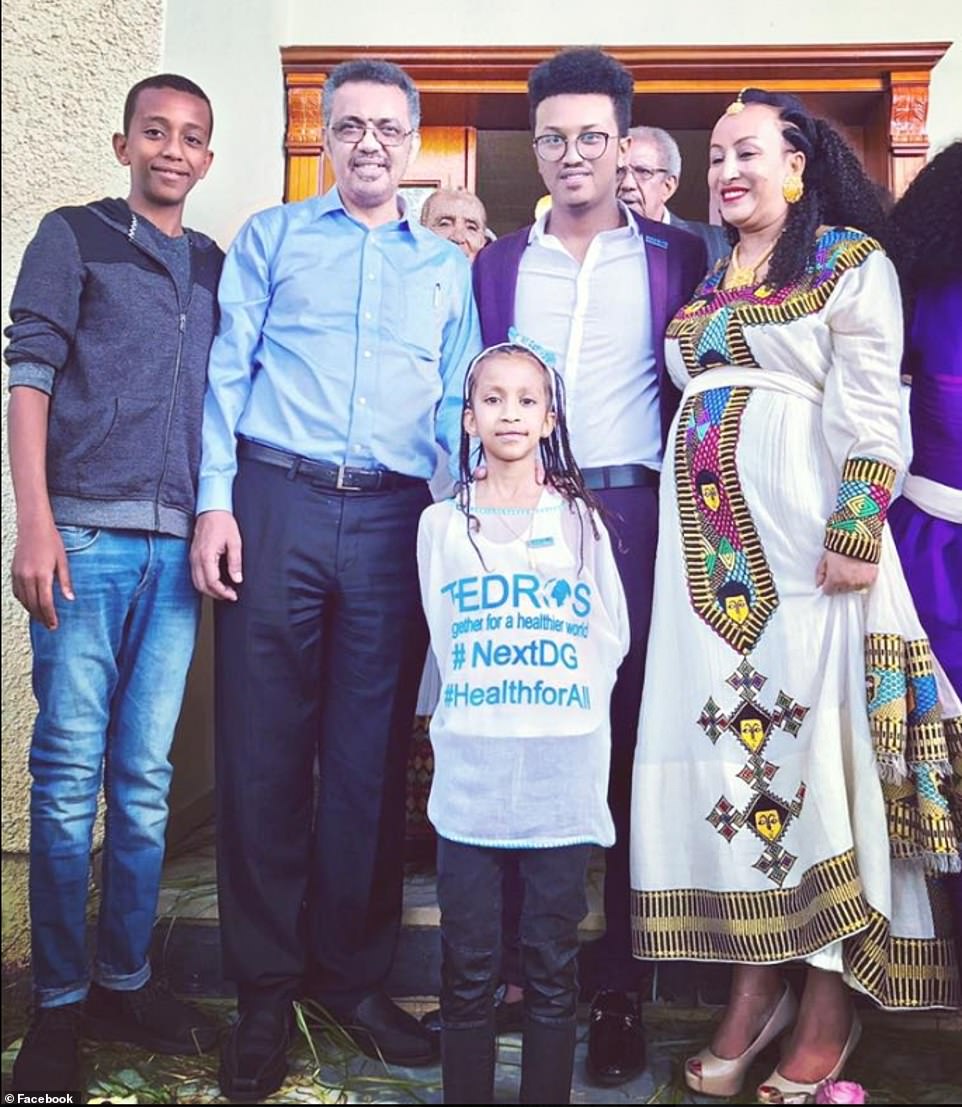 Dr Tedros (pictured with his family) was widely praised during his tenure as Ethiopia’s health minister for helping to lower rates of measles, malaria, and HIV/AIDS as well as building thousands of health centres and hiring thousands of medics

MailOnline has contacted the WHO for comment, but had not heard back at the time of publication. This site also reached out to the University of London and University of Nottingham to check biographical infomation on Dr Tedros, but had also not received a response.

Recent criticism of the WHO and Dr Tedros specifically stems from its handling of the coronavirus pandemic, and in particular its perceived closeness to authorities in Beijing.

Dr Tedros visited Beijing himself back in January and spoke with President Xi about the country’s response, returning to give a speech that praised the regime’s transparency, the speed of its response, and credited it with saving lives both at home and overseas.

That is despite the fact that medics from Taiwan – which are not represented at the WHO since China claims it as part of its country – claimed to have raised concerns about the response as far back as December 2019.

Medics told the Financial Times that they had anecdotal evidence of human-to-human transmission of the virus, something China was denying at the time and a key factor in turning the disease into a global pandemic.

They claim this was reported to the WHO on December 31, but not shared with other countries. China itself did not report human-to-human transmission until almost a month later – January 20 – by which time the disease had began spreading throughout the country and across the world.

A petition calling for Dr Tedros’s resignation which began in Taiwan has now topped 750,000 signatures. 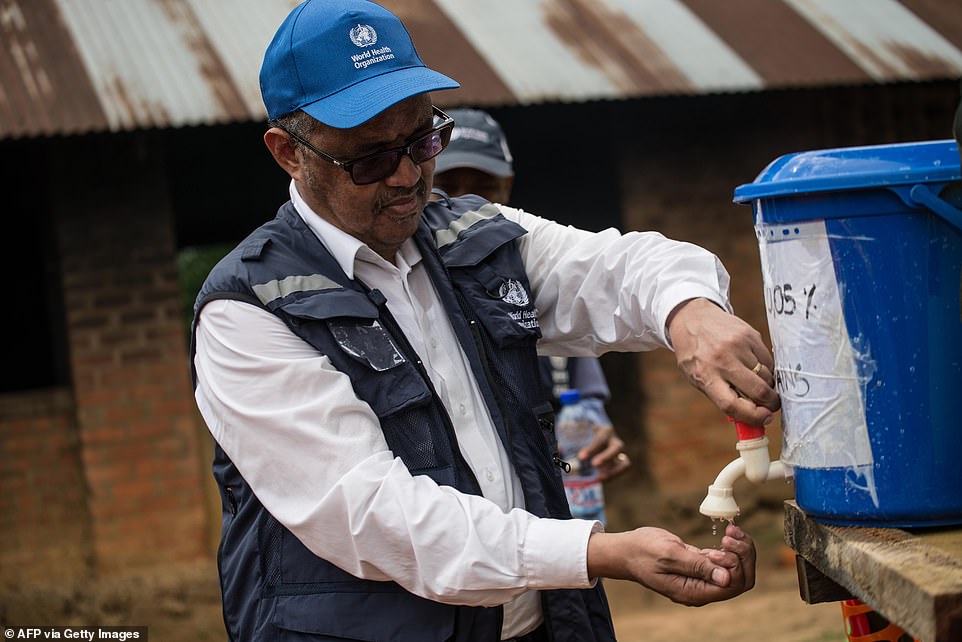 The WHO Director is known for his hands-on approach, often personally visiting countries affected by disease outbreaks – including the Democratic Republic of Congo which was hit by Ebola in 2018 (pictured)

China has also faced allegations it attempted to silence medics – including the now-deceased Dr Li Wenliang – who first reported on the disease, and covered up early cases.

At his Tuesday evening coronavirus briefing, Donald Trump took aim at the WHO, saying the US would consider suspending funding to the organisation until an investigation is carried out.

‘They called it wrong, they missed the call,’ he said, adding: ‘They should have known and they probably did know,’ suggesting the WHO was withholding information about the coronavirus.

‘The WHO, that’s the World Health Organization, receives vast amounts of money from the United States and we pay for a majority, the biggest portion of their money, and they actually criticized and disagreed with my travel ban at the time I did it,’ Trump said near the top of the briefing.

‘And they were wrong. They’ve been wrong about a lot of things.

‘And they had a lot of information early and they didn’t want to – they seemed to be very China centric,’ he said.

He said: ‘We are now in an acute phase of the pandemic – now is not the time to cut back on funding.’

He also said his administration would look into whether the US would withdraw its $513m funding.

Coronavirus has now infected at least 1.4million worldwide and killed more than 80,000 – though these figures are widely believed to be under-estimates.

The coronavirus facts China wants the world to forget: Beijing releases a COVID-19 timeline – but fails to include whistle-blowers, Huanan food market and ‘the order to destroy all samples’

China‘s official news agency has released a coronavirus timeline to hit back at accusations that Beijing tried to cover up the full scale of the outbreak.

State-run Xinhua said that the timeline, published on Monday, proved how the country ‘has shared information and advanced international cooperation’ in the fight against the killer bug.

The 37-page document included – as described by Xinhua – the ‘main facts and measures China has taken’ to contain the epidemic. In particular, it hailed the role of President Xi Jinping and other Communist leaders.

However, the mammoth report has left out some of the most crucial events of the health crisis, each of which has played a decisive role in the development of the global emergency.