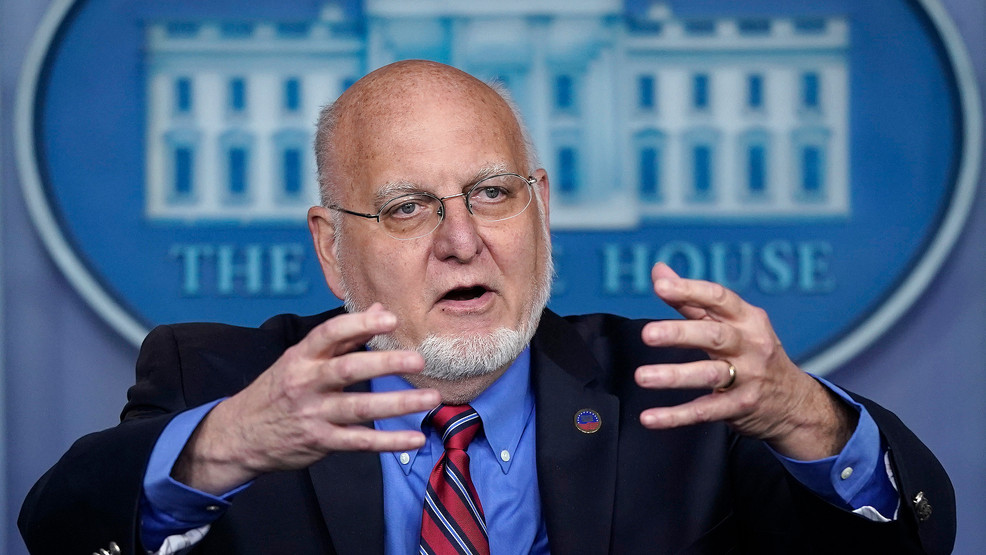 Dr. Robert Redfield, Director of the Centers for Disease Control and Prevention speak during the daily briefing of the coronavirus task force at the White House on April 22, 2020 in Washington, DC. (Photo by Drew Angerer/Getty Images)

GAINESVILLE, Fla. (AP) — The decision to shelve detailed advice from the nation’s top disease control experts for reopening communities during the coronavirus pandemic came from the highest levels of the White House, according to internal government emails obtained by The Associated Press.

The files also show that after the AP reported Thursday that the guidance document had been buried, the Trump administration ordered key parts of it to be fast-tracked for approval.

The trove of emails show the nation’s top public health experts at the Centers for Disease Control and Prevention spending weeks working on guidance to help the country deal with a public health emergency, only to see their work quashed by political appointees with little explanation. 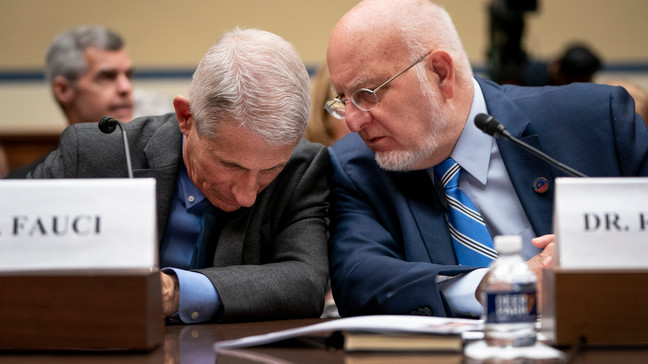 Dr. Anthony Fauci, Director, National Institute of Allergy and Infectious Diseases at National Institutes of Health, and Dr. Robert Redfield, director of the Centers for Disease Control and Prevention (CDC), talk with each other during a House Oversight And Reform Committee hearing concerning government preparedness and response to the coronavirus, in the Rayburn House Office Building on Capitol Hill March 11, 2020 in Washington, DC. (Photo by Drew Angerer/Getty Images)

The document, titled “Guidance for Implementing the Opening Up America Again Framework,” was researched and written to help faith leaders, business owners, educators and state and local officials as they begin to reopen. It included detailed “decision trees,” or flow charts aimed at helping local leaders navigate the difficult decision of whether to reopen or remain closed.

White House spokeswoman Kayleigh McEnany said Friday that the documents had not been approved by CDC Director Robert Redfield. The new emails, however, show that Redfield cleared the guidance.

This new CDC guidance — a mix of advice already released along with newer information — had been approved and promoted by the highest levels of its leadership, including Redfield. Despite this, the administration shelved it on April 30.

As early as April 10, Redfield, who is also a member of the White House coronavirus task force, shared via email the guidance and decision trees with President Donald Trump’s inner circle, including his son-in-law Jared Kushner, top adviser Kellyanne Conway and Joseph Grogan, assistant to the president for domestic policy. Also included were Dr. Deborah Birx, Dr. Anthony Fauci and other task force members. 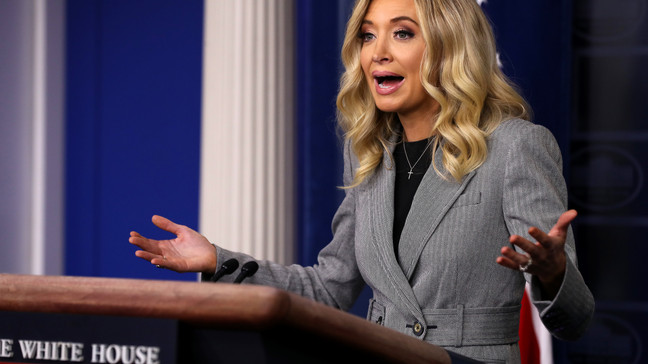 White House Press Secretary Kayleigh McEnany talks about the Trump Administration’s ongoing response to the novel coronavirus pandemic during a news conference in the Brady Press Briefing Room at the White House May 08, 2020 in Washington, DC.(Photo by Chip Somodevilla/Getty Images)

Three days later, CDC’s upper management sent the more than 60-page report with attached flow charts to the White House Office of Management and Budget, a step usually taken only when agencies are seeking final White House approval for documents they have already cleared.

The 17-page version later released by The AP and other news outlets was only part of the actual document submitted by the CDC, and targeted specific facilities like bars and restaurants. The AP obtained a copy Friday of the full document. That version is a more universal series of phased guidelines, “Steps for All Americans in Every Community,” geared to advise communities as a whole on testing, contact tracing and other fundamental infection control measures.

“We plan to post these to CDC’s website once approved. Peace, God bless r3,” the director wrote. (Redfield’s initials are R.R.R.) 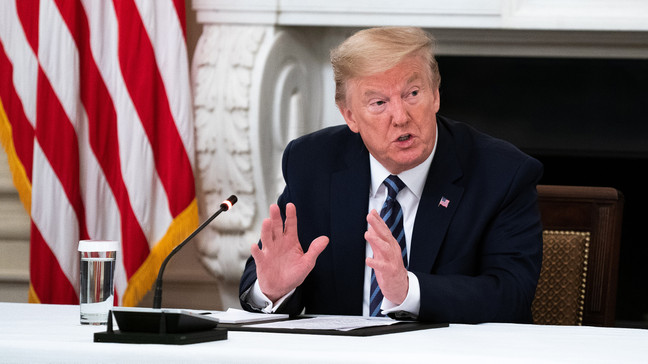 U.S. President Donald Trump makes remarks at the beginning of a meeting with Congressional Republicans in the State Dining Room at the White House May 08, 2020 in Washington, DC. (Photo by Anna Moneymaker-Pool/Getty Images)

Redfield’s emailed comments contradict the White House assertion Thursday that it had not yet approved the guidelines because the CDC’s own leadership had not yet given them the green light.

Two days later, on April 26, the CDC still had not received any word from the administration, according to the internal communications. Robert McGowan, the CDC chief of staff who was shepherding the guidance through the OMB, sent an email seeking an update. “We need them as soon as possible so that we can get them posted,” he wrote to Nancy Beck, an OMB staffer.

Beck said she was awaiting review by the White House Principals Committee, a group of top White House officials. “They need to be approved before they can move forward. WH principals are in touch with the task force so the task force should be aware of the status,” Beck wrote to McGowan.

The next day, April 27, Satya Thallam of the OMB sent the CDC a similar response: “The re-opening guidance and decision tree documents went to a West Wing principals committee on Sunday. We have not received word on specific timing for their considerations. 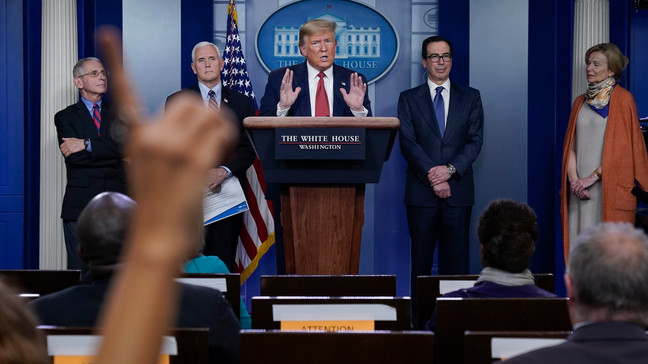 U.S. President Donald Trump, joined by members of the Coronavirus Task Force, speaks during a briefing on the coronavirus pandemic, in the press briefing room of the White House on March 25, 2020 in Washington, DC. (Photo by Drew Angerer/Getty Images)

“However, I am passing along their message: they have given strict and explicit direction that these documents are not yet cleared and cannot go out as of right now — this includes related press statements or other communications that may preview content or timing of guidances.”

According to the documents, CDC continued inquiring for days about the guidance that officials had hoped to post by Friday, May 1, the day Trump had targeted for reopening some businesses, according to a source who was granted anonymity because they were not permitted to speak to the press.

On April 30 the CDC’s documents were killed for good.

The agency had not heard any specific critiques from either the White House Principals Committee or the coronavirus task force in days, so officials asked for an update. 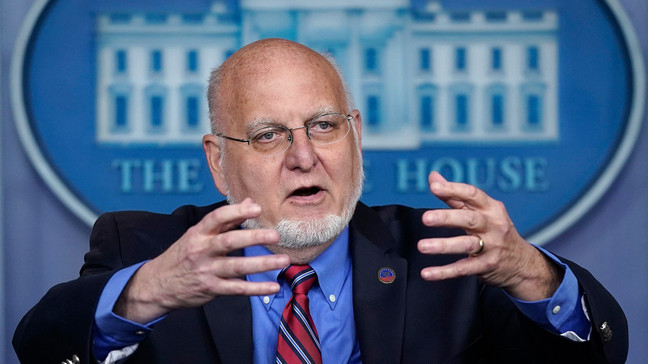 Dr. Robert Redfield, Director of the Centers for Disease Control and Prevention speak during the daily briefing of the coronavirus task force at the White House on April 22, 2020 in Washington, DC. (Photo by Drew Angerer/Getty Images)

“The guidance should be more cross-cutting and say when they should reopen and how to keep people safe. Fundamentally, the Task Force cleared this for further development, but not for release,” wrote Quinn Hirsch, a staffer in the White House’s office of regulatory affairs (OIRA), in an email to the CDC’s parent agency, the Department of Health and Human Services.

CDC staff working on the guidance decided to try again.

The administration had already released its Opening Up America Again Plan, and the clock was ticking. Staff at CDC thought if they could get their reopening advice out there, it would help communities do so with detailed expert help.

But hours later on April 30, CDC’s Chief of Staff McGowan told CDC staff that neither the guidance documents nor the decision trees “would ever see the light of day,” according to three officials who declined to be named because they were not authorized to speak to reporters.

The next day, May 1, the emails showed, a staffer at CDC was told “we would not even be allowed to post the decision trees. We had the team (exhausted as they are) stand down.”

The CDC’s guidance was shelved. Until May 7.

That morning The Associated Press reported that the Trump administration had buried the guidance, even as many states had started allowing businesses to reopen.

After the story ran, the White House called the CDC and ordered them to refile all of the decision trees, except one that targeted churches. An email obtained by the AP confirmed the agency resent the documents late Thursday, hours after news broke.

“Attached per the request from earlier today are the decision trees previously submitted to both OIRA and the WH Task Force, minus the communities of faith tree,” read the email. “Please let us know if/when/how we are able to proceed from here.”