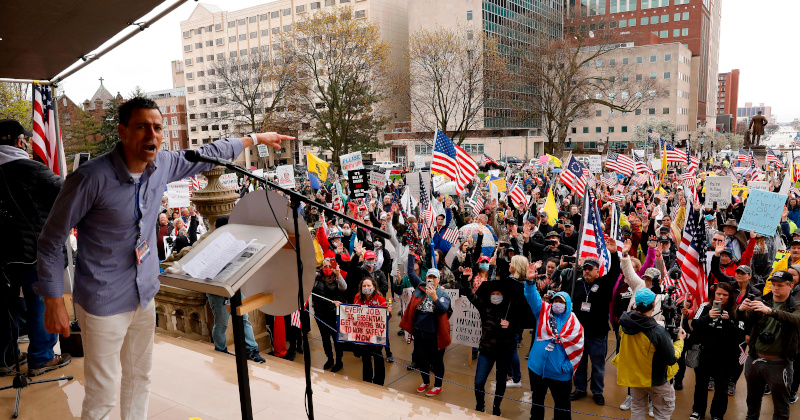 Right-wing militia groups in Michigan plan to rally at the state capitol building on Thursday to protest Democratic governor Gretchen Whitmer’s stay-at-home orders that she put in place to slow the deadly spread of the coronavirus pandemic.

Thursday’s demonstration will be the latest in a series of protests that started as a demonstration against the lockdown policy but are now generating fears of an eruption of political violence.

Related: ‘Big Gretch’: how the pandemic pushed Michigan’s governor into the spotlight

The state is currently investigating what the Michigan attorney general, Dana Nessel, characterized on Monday as “credible threats” against state Democratic politicians.

Her comments followed a report of threats of violence on right wing social media pages.

Residents posting in the Michiganders Against Excessive Quarantine Facebook page called for Whitmer’s assassination. “Wonder how long till she’s hit with a shotgun blast,” one wrote. Another said they hope Thursday’s protesters are “armed to the teeth” because “voting is too late”.

Dramatic images from a 30 April protest showed militia members carrying assault rifles while glaring and shouting from the galleries of the state legislature as an emotional debate over extending a stay-at-home order took place. In response, a black lawmaker last week came to Michigan’s capitol with an escort of armed black citizens.

Few states have been hit harder by the pandemic than Michigan.

Wayne county, which holds the city of Detroit, has recorded some of the US’s highest rates of infection. Whitmer has instituted some of the country’s strictest emergency orders in order to control the virus’ spread. Polls have consistently shown the state’s residents approve by a wide margin of how she’s managed the crisis.

However, some residents of rural counties contend they shouldn’t be subjected to the orders because the infection rates in their communities are relatively low. But that message has frequently gotten lost as the demonstrations turned into a flashpoint in the bitter debate over gun rights, and a forum for making political statements and threats against Democrats.

Facebook has shut a popular group for Michiganders who oppose their governor’s extreme lockdown measures, fueling debate about free speech during the coronavirus crisis.
‘Michiganders Against Excessive Quarantine’ had more than 380,000 members, with media reports describing it as one of the largest anti-lockdown groups in the nation. It’s not clear if Facebook has provided an explanation for the group’s removal.Visiting the page gives the following message: “Sorry, this content isn’t available right now.”Garrett Soldano of Mattawan, Michigan created Michiganders Against Excessive Quarantine in April after becoming disenchanted with Governor Gretchen Whitmer’s stay-at-home order – a policy which he initially supported.

The group made headlines around the world after organizing ‘Operation Gridlock’, a protest in which thousands of cars created bumper-to-bumper traffic in the capital, Lansing.

Protesters were encouraged to stay in their automobiles and adhere to social distancing guidelines. However, several hundred demonstrators ended up rallying outside the state house.

Many members of the group used the space to talk about the depression and financial hardships that they were experiencing as a result of the governor’s executive orders, first enacted in March 23, which have forced all ‘non-essential’ businesses and to remain closed.

Some pics from ‘Pennsylvania Against Excessive Quarantine’ Facebook group. 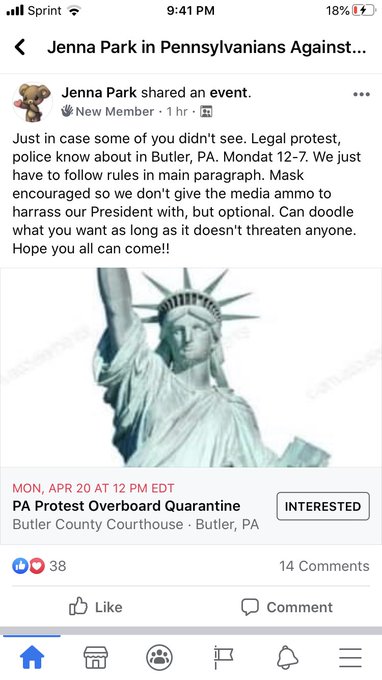 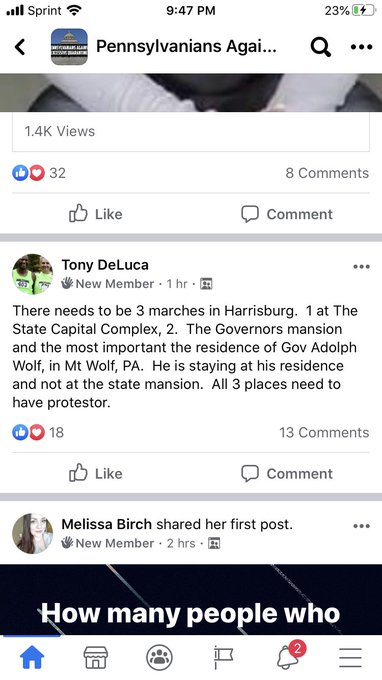 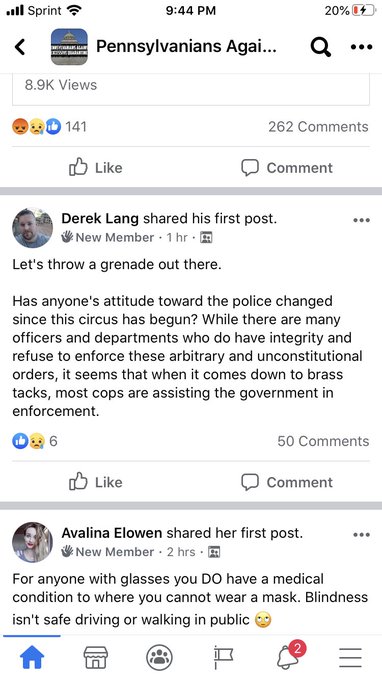 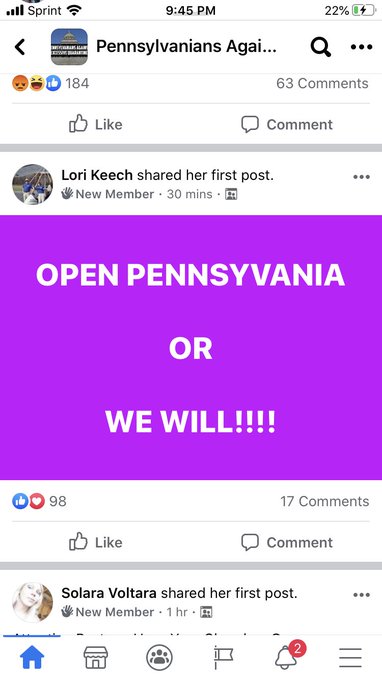 Whitmer unilaterally extended her emergency powers in May, after the legislature voted to let them expire. The governor has used these executive powers as the legal basis for the state’s lockdown.

“They will not silence us,” Soldano said in a video message after the group was deleted.

“This just proves to all of us out there that we were right. That there is a deep agenda going on. They’re trying to keep us quiet… Now we fight back. And we have the numbers.”

For now, the message is unavailable on Facebook. On Wednesday, Soldano began promoting a new page, Stand Up Michigan, which gained thousands of members before also being pulled from the site.

The removal of Soldan’s anti-lockdown group has not gone unnoticed on social media. Former New York Times reporter Alex Berenson described the decision to pull the page as a clear example of “censorship.”

Some challenged the notion, apparently arguing that the group’s beliefs were not worthy of being protected. Even Elon Musk, who re-opened his Tesla plant in California in defiance of local officials, weighed in.

Facebook disbanned my “Light My Nuts on Fire and Run into the Neighbors’ Pool” group. They censored my free speech!

Best group on FB by far

95 people are talking about this

Last month, Facebook deleted anti-lockdown pages that were organizing demonstrations in California, Nebraska, and New Jersey, claiming that the groups were in violation of those states’ stay-at-home orders.

Meanwhile, the tech giant announced that it would be working with fact-checkers to “stop the spread of misinformation and harmful content about Covid-19.” An update regarding the policy, dated May 12, states that the platform put warning labels on around 50 million “pieces of content related to Covid-19.”