Los Angeles Mayor Eric Garcetti sought to fend off criticism from federal officials Friday over his handling of coronavirus stay-at-home orders, even as he announced the lifting of various restrictions over this Memorial Day weekend.

Earlier in the day, the White House’s coronavirus response coordinator singled out Los Angeles as one of three regions where persistent spread remains a significant concern as the holiday weekend posed another test of whether coronavirus can be slowed even with loosened stay-at-home rules.

Then, the U.S. Department of Justice sent a warning letter to the mayor saying it was concerned the city was pursuing “an arbitrary and heavy-handed approach” to stay-at-home orders.

“Reports of your recent public statements indicate that you suggested the possibility of long-term lockdown of the residents in the city and county of Los Angeles, regardless of the legal justification for such restrictions,” Dreiband wrote. “Any such approach may be both arbitrary and unlawful.”

Garcetti responded at an evening press conference, saying, “Look, we’re not guided by politics in this, we are guided by science. We are guided by collaboration. So talking to industry and talking to business owners and talking to employees and labor groups together with science, the numbers will always guide us forward, there is nothing else.”

Garcetti said there were “no games” being played with health restrictions. “We were able to do this and save lives. Now its time for us to test things moving forward and I think the proof’s in the pudding. We’ve been doing that, we’ve been doing it safely and we will monitor those numbers because people’s lives are at stake.”

After giving a mostly upbeat assessment of the nation’s progress, Birx said the Los Angeles metropolitan area, which includes Orange County, is continuing to see a high number of new cases reported each day. Washington, D.C., and Chicago also remain hot spots of the virus, she said.

Birx asked the Centers for Disease Control and Prevention to work with those areas “to really understand where are these new cases coming from, and what do we need to do to prevent them in the future.”

Garcetti responded by saying the city had shown “very steady progress” against the disease.

“We’ve got the capacity, the ventilators, the beds available,” Garcetti said. “We’ve seen a plateau and we share that data publicly with everybody about the seven-day average. It’s holding where it is, which is dramatically different than where it was a month and a half, let alone two months ago.”

Los Angeles County is the epicenter of the coronavirus outbreak in California, accounting for about 56% of the state’s total deaths and almost half of more than 90,000 confirmed infections. Public health officials on Friday announced 1,072 new cases of the coronavirus and 35 related deaths, bringing the county’s total to 43,070 cases and 2,051 deaths.

Trump calls on churches and other houses of worship to reopen this weekend
May 22, 2020

But Los Angeles County officials said on Friday also pointed to positive signs that the region was making progress and stressed they were already working with CDC officials on ways to slow the spread of coronavirus.

Ferrer said that though deaths remain a grave concern, “our overall data points are looking pretty good in terms of being on the recovery journey.”

Those figures include a 12% decrease in the county’s latest seven-day average of deaths per day and a 15% decrease in its most recent three-day average for hospitalizations per day, she said.

The coronavirus transmission rate in the nation’s most populous county is now in its best position since the magnitude of the outbreak became clear in March, officials announced earlier this week.

“We are moving in the right direction, and I want to acknowledge CDC has been a strong source of support for L.A. County since the beginning of the pandemic,” she said.

A total of 1,506 coronavirus patients are currently in county hospitals, with 26% in intensive care and 19% on ventilators.

Outbreaks at institutional facilities remain a particular source of concern.

About a quarter of the county’s total cases — 10,885 — were associated with such facilities, including nursing and assisted-living homes, shelters, treatment centers, correctional facilities and workplaces. They included 7,046 residents and 3,840 staff.

Los Angeles County has been hit far less severely than coronavirus hot spots such as New York City, where more than 16,000 have died.

But as other regions, including the Bay Area, have seen the coronavirus curve flatten, progress has been much slower in L.A.

CALIFORNIA
As coronavirus deaths mount, L.A. County is far behind on promise to test everyone in nursing homes
May 22, 2020

Officials remain concerned that warm temperatures and quarantine fatigue could drive people from their homes over the Memorial Day weekend, resulting in crowding at parks and beaches that could threaten to undo some of the progress the state has made.

As part of the city’s slow reopening, the city will open two designated recreation zones on Monday and two more slow street areas in Eagle Rock and Mid-City, where traffic is limited to local residents, freeing up space for pedestrians and bicyclists, the mayor announced.

“It feels like sacrifice is in all our minds these days,” Garcetti said, referencing the upcoming Memorial Day holiday. “But each day, each one of us in this city, the largest city and the largest state in this great union, we continue to do the work. To protect ourselves, to protect our families and protect our nation.”

Ahead of the weekend, L.A. County announced it was reopening beach bike paths and some parking lots, and said indoor malls could resume operations for curbside pickup services. The county also lifted a ban on car parades to celebrate events such as graduations.

“I know we are lifting restrictions in certain areas,” Supervisor Kathryn Barger said. “Please be responsible because this is the only way we are going to move toward the next phase of opening. … The only way we’re going to get there is if we continue to keep this flat.” 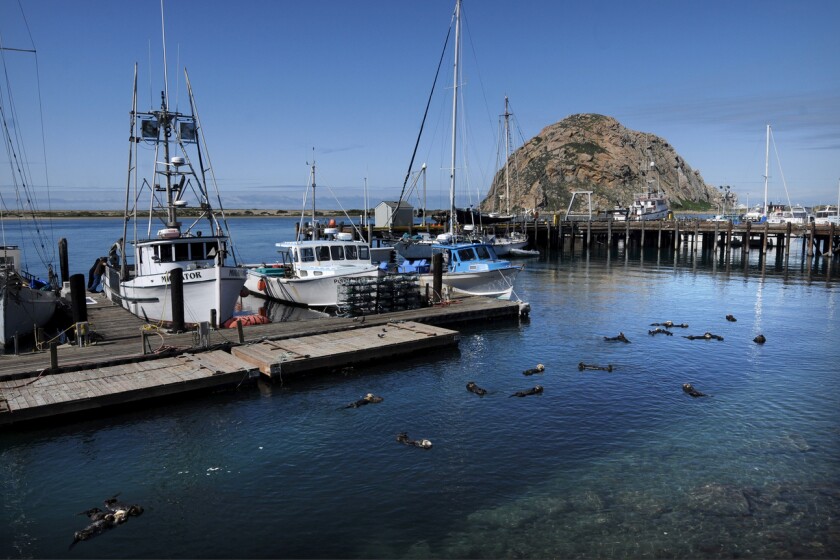 CALIFORNIA
Even as California reopens, some officials tell tourists to stay away
May 22, 2020

Officials urged residents to continue to stay home when possible, stay six feet apart from others when in public and wear cloth face coverings when others are around.

“As a reminder, the job we do protecting each other affects how many new cases, how many new hospitalizations and how many new deaths we see several weeks from now,” Ferrer said. “So over the weekend, let’s continue to use all the tools that we have available to slow the spread of COVID-19.”

In Orange County, several coastal cities expanded their beach hours and planned to open more parking lots connected to the shoreline ahead of the holiday.

That comes as the coronavirus-related death toll there continues to rise. The county reported 108 additional cases and six deaths Friday, bringing its total to 4,941 cases and 118 deaths. Of the fatalities, more than a quarter have been recorded in the last three days.

TRAVEL
What’s open and closed this long weekend: Beaches, parks and trails in Southern California
May 23, 2020

Elsewhere in the state, cities were continuing to urge social distancing, even as stay-at-home restrictions are further relaxed. In San Francisco, the parks department painted 10-foot circles on the grass of four city parks ahead of the holiday weekend to remind visitors to keep their distance from one another.

It’s part of a pilot program based on a similar effort at Domino Park in Brooklyn, said Tamara Barak Aparton, a spokeswoman for San Francisco Recreation and Parks.

“It’s going to be warm this weekend and we knew people would be out, so we thought it would be a good time to get feedback on whether this helps,” Aparton said. If successful, the circles could be expanded to more locations, she said.

But in the San Bernardino National Forest, officials will close a 2.5-mile stretch in Deep Creek in the Lake Arrowhead area for a year to deal with chronic overcrowding. The creek’s swimming holes, especially at Aztec Falls, have drawn crowds in past years that have created growing traffic and parking issues on the narrow roads. 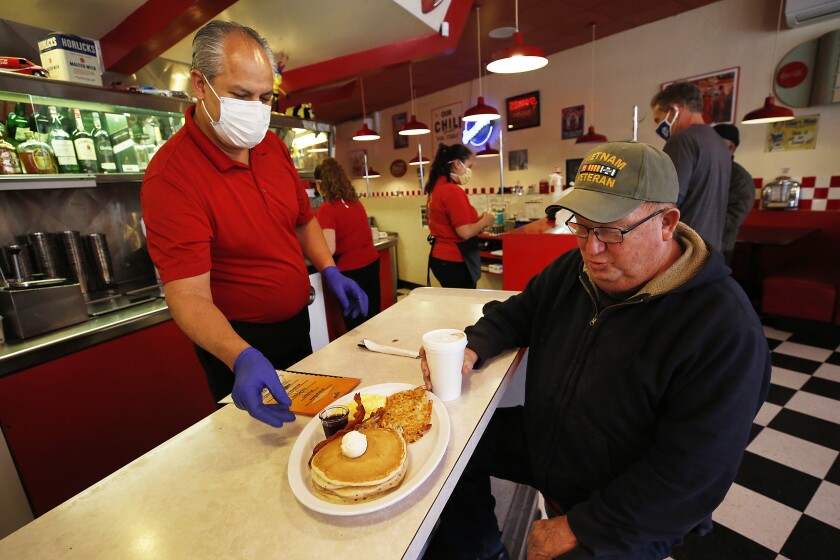 Much of California has progressed to a point where officials feel it’s safe to lift more of the state’s stay-at-home order and allow more businesses to reopen.

The number of new coronavirus cases across the state declined from the previous week, and hospitalizations have dropped more than 15% from a peak six weeks ago, according to a Times analysis.

Most counties have received approval to progress more quickly through Phase 2 of the state’s reopening road map — meaning they can open restaurant dining rooms and more retail businesses for in-store shopping.

Still, some local officials are urging tourists to stay away — at least for now. Multiple counties have expressed concern about people visiting and possibly bringing with them the coronavirus, especially during this holiday weekend.

Dr. Penny Borenstein, San Luis Obispo County’s health officer, asked tourists to not visit as the county reopened many shops and restaurants this week. While officials have performed “spot checks” with hotels to deter tourism, Borenstein said the county would cite visitors only in the case of “egregious violations.”

Communities in the Lake Tahoe region, which heavily depend on tourism as well, have issued reminders before the holiday weekend warning that leisure travel is not permitted.

On its website, the city of South Lake Tahoe said that although owners of second homes are now welcome, other visitors are still not. Lodging will not be available to short-term renters.

“We would love nothing more than to welcome everyone to Tahoe right now, but that’s not the safest way to bring people back to South Lake,” City Manager Joe Irvin said in a statement. “We need to be responsible and make sure we are doing our part to keep our neighbors safe and Tahoe safe while adhering to the governor’s stay-at-home orders.”