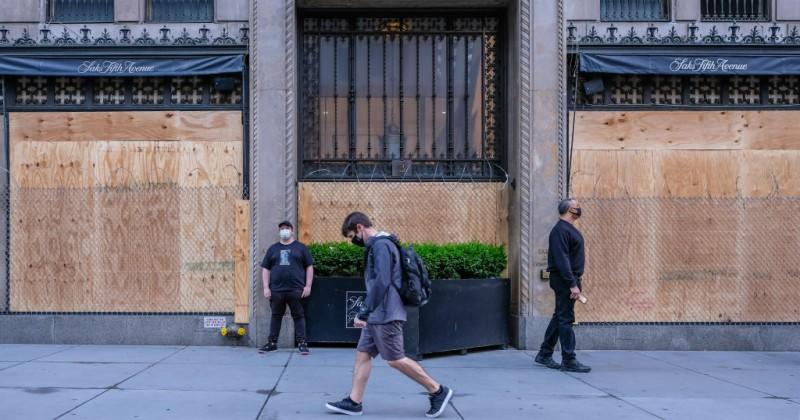 Born and bred in New York, Altucher took his family and fled to Florida after the Black Lives Matter riots in June when someone tried to break into his apartment.

Since then, the city has continued to suffer a huge surge in shootings and violent crime as well as an anemic financial recovery from the coronavirus lockdown.

Appearing on Fox News Business, Altucher referred to images that were broadcast during the interview showing 6th avenue to be virtually empty.

“We have something like 30 to 50 per cent of the restaurants in New York City are probably already out of business and they’re not coming back,” he pointed out.

Altucher said that despite offices in midtown being allowed to be open, they’re still largely empty because companies like Citigroup, JP Morgan, Google, Twitter and Facebook are encouraging their employees to work remotely from home “for years or maybe permanently.”

“This completely damages not only the economic eco-system of New York City…but what happens to your tax base when all of your workers can now live anywhere they want to in the country?” asked the entrepreneur, noting that many were fleeing to places that are cheaper to live like Nashville, Austin, Miami and Denver.

Warning that the situation was “only going to get worse,” Altucher said that the old New York was not coming back and that creative and business opportunities would now be dispersed throughout the entire country.

“What makes this different now is bandwidth is ten times faster than it was in 2008 so people can work remotely now and have an increase in productivity,” he added.

As we document in the video below, the blame for all this lies firmly at the feet of two people, Governor Cuomo and Mayor de Blasio.

People Should Make Preparations for Our Country to Go Over the Financial Cliff, Politicians Both-(RNC,DNC) the Elitist, NWO Pukes and Our Medical Experts Are in a Club and You Are Not a Member, You Should Prepare for the Worst, Please Prepare Yourself, the Death Angel Will Make Her Appearance Very Soon…

This coronavirus abundantly fulfills the prophecy in Matthew 24:4-8 and Revelation 6:6 that plagues/pestilences will strike the world in the time just prior to the end of our age when, divine intervention will end our age and usher in a millennium ruled by Jesus Christ and the saints (Revelation 20:3-4. As a point of clarification, the King James Version of the Bible does not use the word “plague” or “pestilence” in verse 6 although the Revised Standard Version and the Jewish New Testament do. The KJV uses the word “death” in the last sentence of verse 6 while the other two translations include the word “pestilence” or “plague.” Wars and food shortages are both clearly mentioned in Matthew 24:6-8 and Revelation 6:1-8 being present on earth during the latter-days of our age. Any way you look at it, I think the Four Horsemen of the Apocalypse are beginning their climactic ride.

Three weeks into a fiscal cliff, a large food bank line emerged on Saturday (Aug. 22) in Queens, a New York City borough, stretching for nearly a quarter-mile down the street.

With each passing day, the failure of Congress and the Trump administration to agree on the next round of stimulus exerts more and more pressure on consumers, who now derive a quarter of all personal income from the government.

The La Jornada food pantry, located on 133-36 Roosevelt Ave, Queens, usually hands out food packages to 1,000 families per week. Now, according to the New York Post, the number, in recent weeks, has skyrocketed to 10,000.

Rodriguez, a volunteer of the food pantry who is executive director, said, “We feel like we are underwater, drowning in a tsunami of people.” He said the surge in hungry families coming to the food bank is “unbelievable.”

The Post interviewed Walter Barrera, who arrived at the food bank at 6:00 ET Saturday to pick up groceries for his family. Barrera, 50, has waited in line every Saturday for food as he lost his construction job during the pandemic. He said there are no jobs available; nevertheless, his teenage sons, 19 and 17, also cannot find jobs.

Barrera said his family is broke, close friends and relatives are helping them pay their $2,300 per month rent in the city:

“What do I tell my children when they look at me with hungry bellies, especially my 11-year-old son?” said Barrera, who is an immigrant from South America, came to the US two decades, in search of the American dream.

Now the dream is dead as the virus-induced recession has crushed millions of low-income folks into financial doom.

“It breaks my heart. I’m their father. I’m supposed to feed them.,” he said.

The Post interviewed others waiting in line, many of whom said they’re jobless and broke.

The reemergence of food bank lines is evidence the fiscal cliff is hitting low-income consumers the hardest, who are no longer receiving stimulus checks, still jobless, and must seek food pantries to feed families. Even though President Trump signed an executive order weeks ago to extend an extra $300-$400 of weekly jobless benefits for tens of millions of Americans, much of that has been delayed as states struggle to fund their portion of the handout.

Months ago HNewsWire came to the conclusion that this country’s food supply was in trouble, we wrote article after article and of course mainstream media and some major websites mocked our position, Google being one of those heavyweights that hide the truth from the American people, Google and most major social media platforms intentionally kept the people in the dark, There is a plan behind what the elitist, New World Order pukes are doing, the new future for American families. ‘FEMA’.. SRH

It’s Becoming Very Obvious, When Trump Hold A News Conference (Briefing) He MUST BE Attached To A Lie Detector

The World Is In Big Trouble, for Those That Believe We Will Go Back to Some Sense of Normal Life Here on Earth, You Will Be Sadly Disappointed, Seven and Half Years of Hell on Earth Which Began January 1, 2020

“Our courts oppose the righteous, and justice is nowhere to be found. Truth stumbles in the streets, and honesty has been outlawed” (Isa. 59:14, NLT)…We Turned Our Backs On GOD, Now We Have Been Left To Our Own Devices, Enjoy…

While Mainstream Media Continues to Push a False Narrative, Big Tech Has Keep the Truth From Coming out by Shadow Banning Conservatives, Christians, and Like-Minded People, Those Death Attributed to the Coronavirus Is a Result of Those Mentioned, They Truly Are Evil…

In police-state fashion, Big Tech took the list of accused (including this site), declared all those named guilty and promptly shadow-banned, de-platformed or de-monetized us all without coming clean about how they engineered the crushing of dissent, Now more than ever big Tech has exposed there hand engaging in devious underhanded tactics to make the sinister look saintly, one of Satan’s greatest weapons happens to be deceit…

The accumulating death toll from Covid-19 can be seen minute-by-minute on cable news channels. But there’s another death toll few seem to care much about: the number of poverty-related deaths being set in motion by deliberately plunging millions of Americans into poverty and despair.

American health care, as we call it today, and for all its high-tech miracles, has evolved into one of the most atrocious rackets the world has ever seen. By racket, I mean an enterprise organized explicitly to make money dishonestly.

All the official reassurances won’t be worth a bucket of warm spit. The Globals are behind the CoronaVirus, It Is a Man-Made Bioweapon.

Google, Reddit, Twitter, and FaceBook are Demonization or Demonisation is the reinterpretation of polytheistic deities as evil, lying demons by other religions, generally by the monotheistic and henotheistic ones. The term has since been expanded to refer to any characterization of individuals, groups, or political bodies as evil…

Force is now the only rule remaining in deep state-controlled America. Everything else has collapsed. There is no free speech, no fair trial, no system of justice, no reasonable expectation of human rights anywhere, no fair elections, no honest news, no honest Wall Street operations, no real public education, no clean food, and threats from the elitist, the power structure that is hell-bent on bringing the New World order into the reality of the sleeping masses, get woke or get yoked, the choice still lives in the people’s hands. Next, the AntiChrist will appear with many empty promises, peace, and security, in reality, it’s the yoking of mankind, We are in the Great Tribulations…