A police horse has been attacked with a pole and punches thrown at officers who have retaliated with pepper spray in wild anti-lockdown protests in Melbourne.

Major scuffles erupted as police met the front-line of protesters who had gathered at the Shrine of Remembrance in Melbourne on Thursday afternoon.

About 200 to 300 Melburnians bearing anti-lockdown signs and chanting slogans turned out at the city’s sacred war memorial in opposition to ongoing coronavirus restrictions in the city.

The chaotic scenes are in stark contrast to what would usually be seen in the Victorian capital leading into an AFL grand final weekend. Melburnians gather in numbers protesting lockdown and Dan Andrew 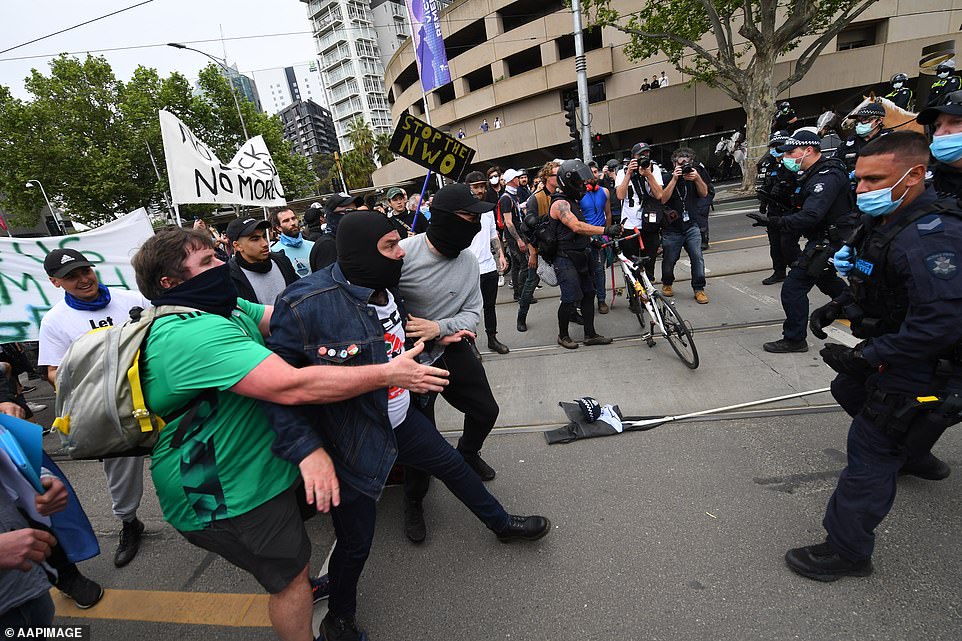 Protesters and police face off at an an anti-lockdown protest in Melbourne on Friday. Police have used pepper spray amid scuffles with demonstrators 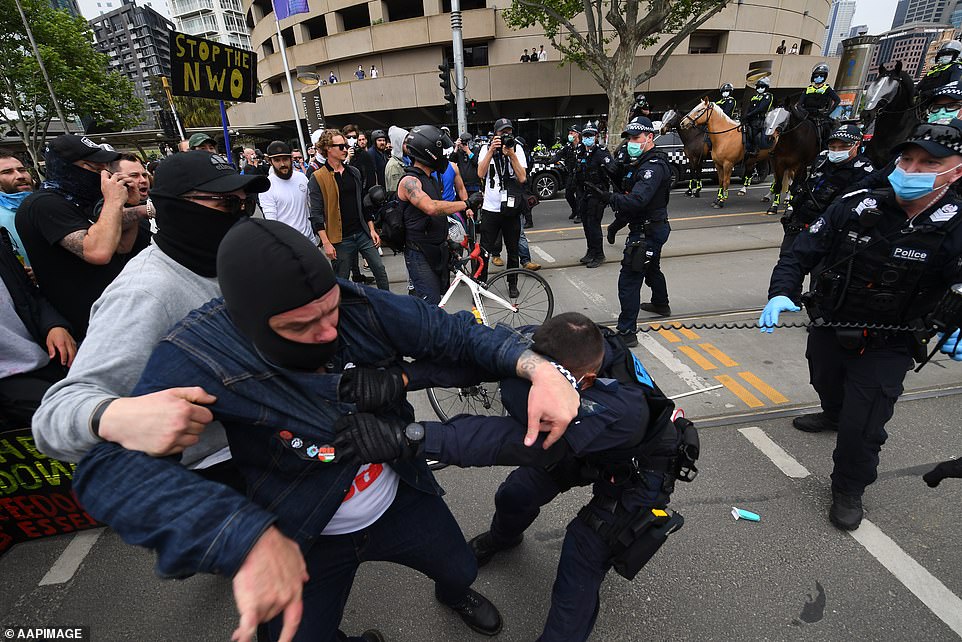 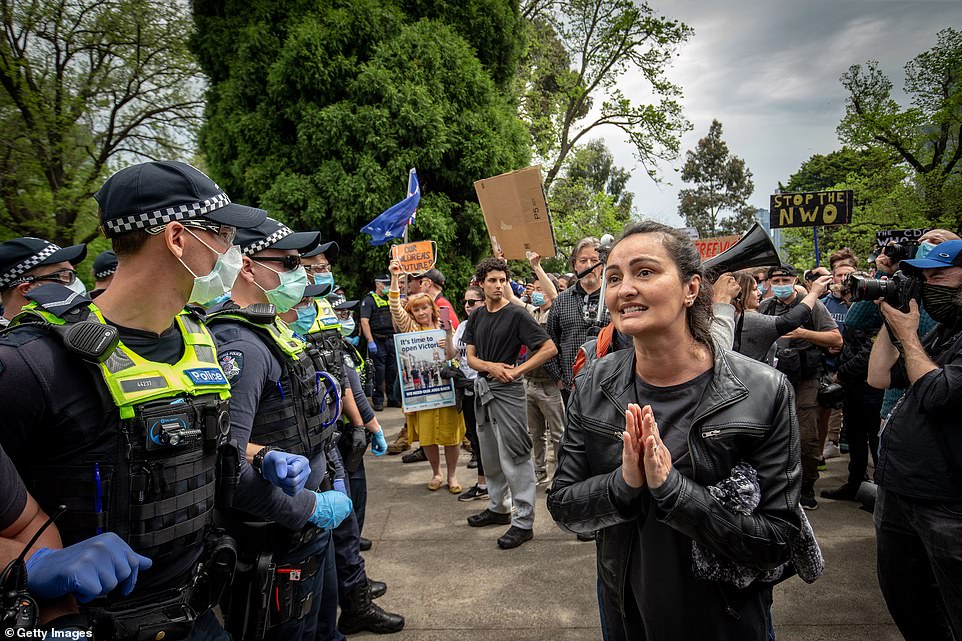 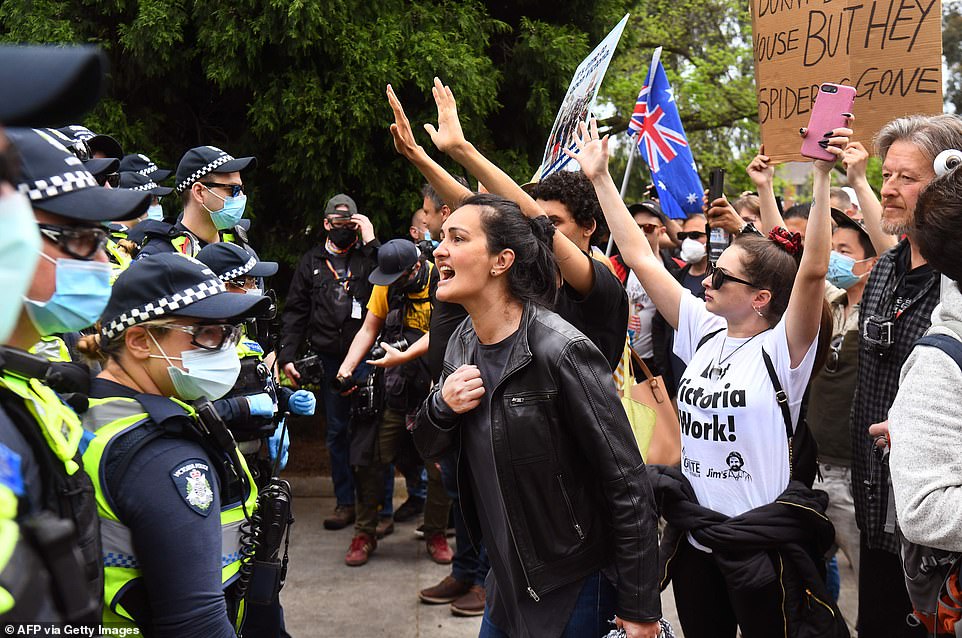 A woman chants in front of members of Victoria Police, who formed a wall in front of activists 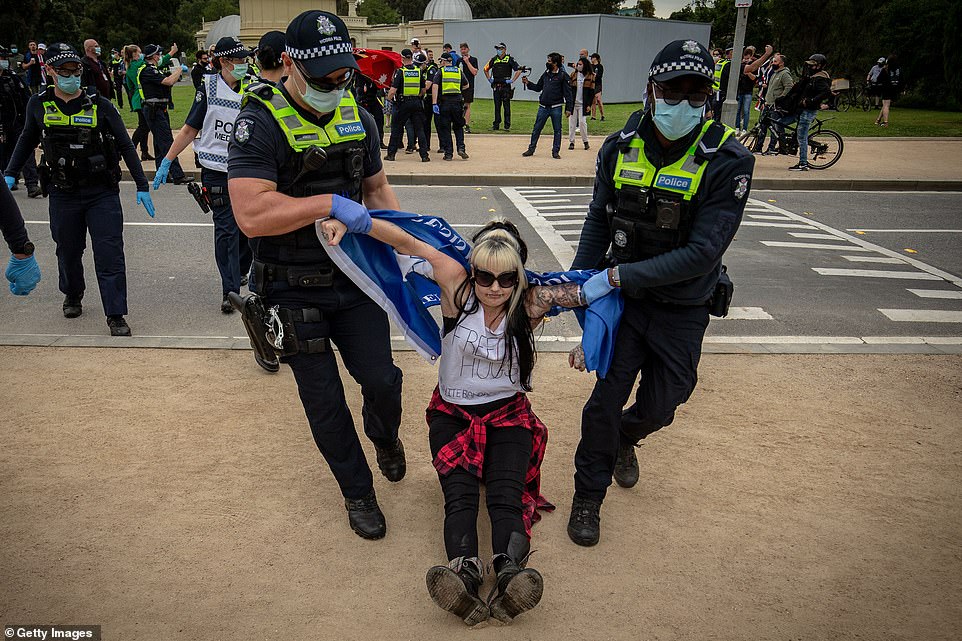 A woman is detained by members of Victoria Police. Protesters are calling on the end to lockdown restrictions in Victoria following a decline in new coronavirus cases reported in the state 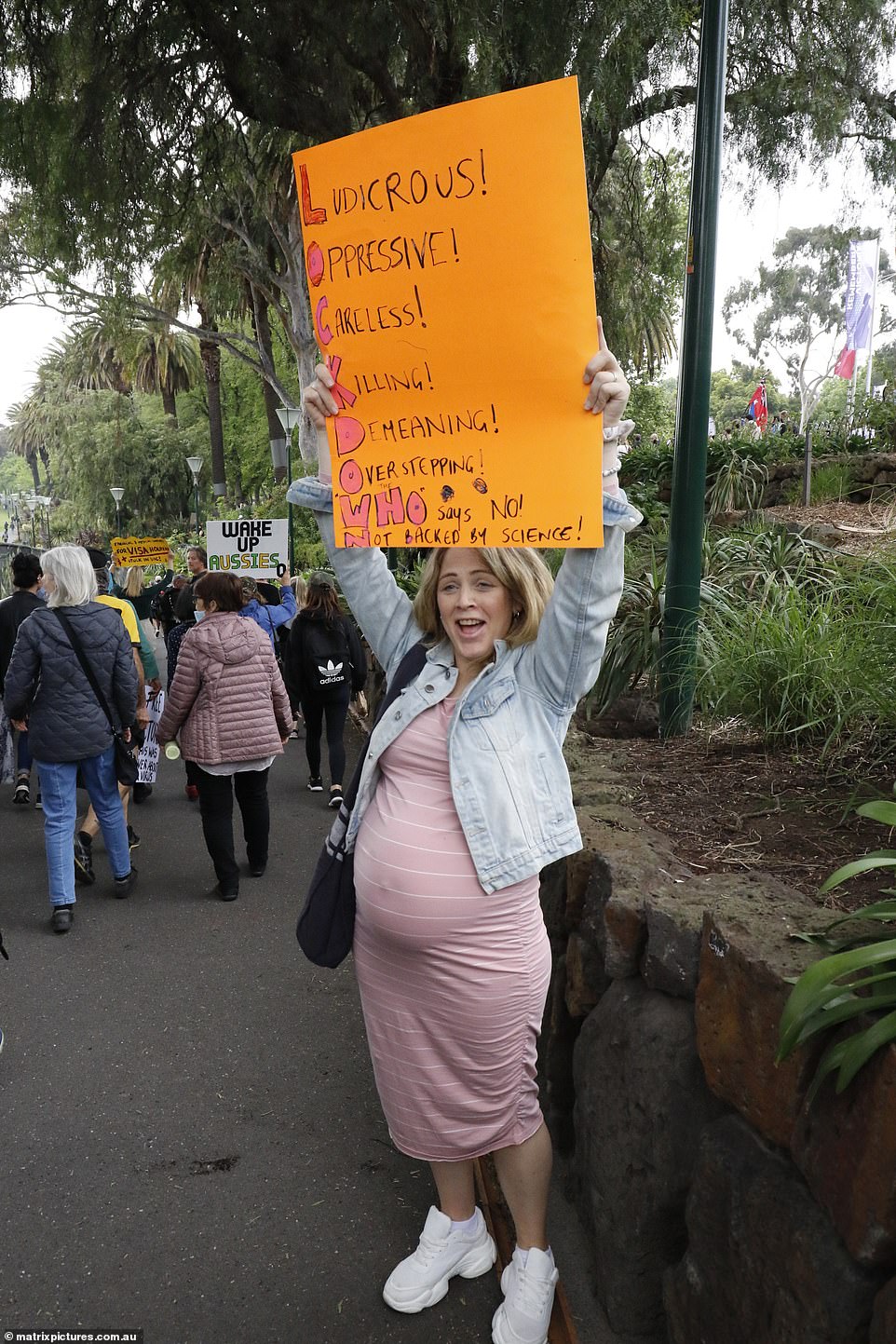 Plastic bottles were reportedly hurled at officers on Thursday afternoon, with an AAP photographer at the scene confirming police have used pepper spray against the protesters.

A number of people have been arrested with one man being filmed yelling at officers: ‘What are you holding me for? What is the problem with you?’

Protesters were seen holding the Australian and American and Eureka flags and bearing placards which read ‘Free Vic’ and ‘Corona hoax 1984’.

The protest got underway about 2pm and is the latest in a string of protests against Premier Daniel Andrews’ tough measures to control COVID-19 infections throughout the last few months. 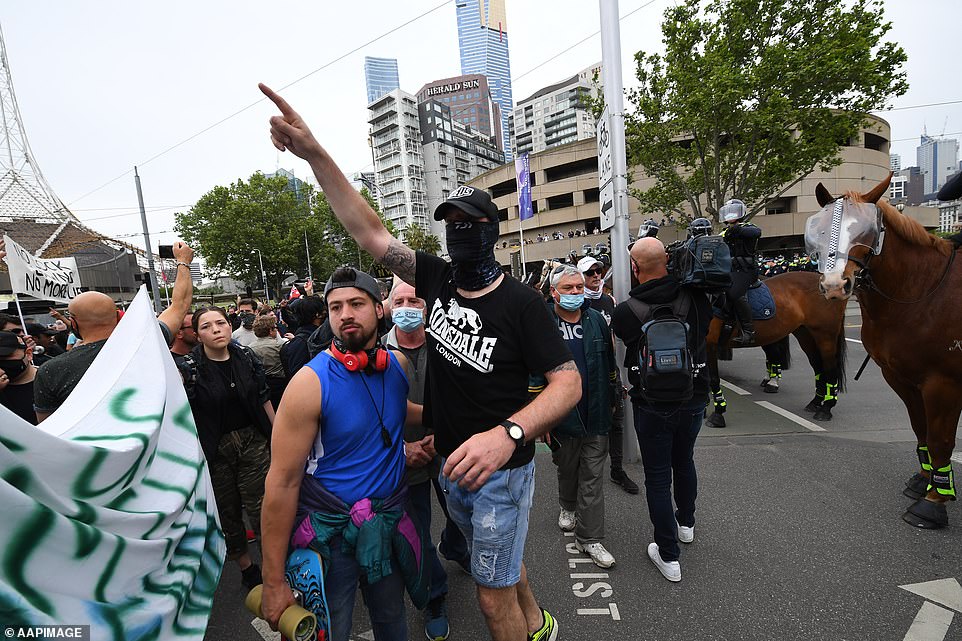 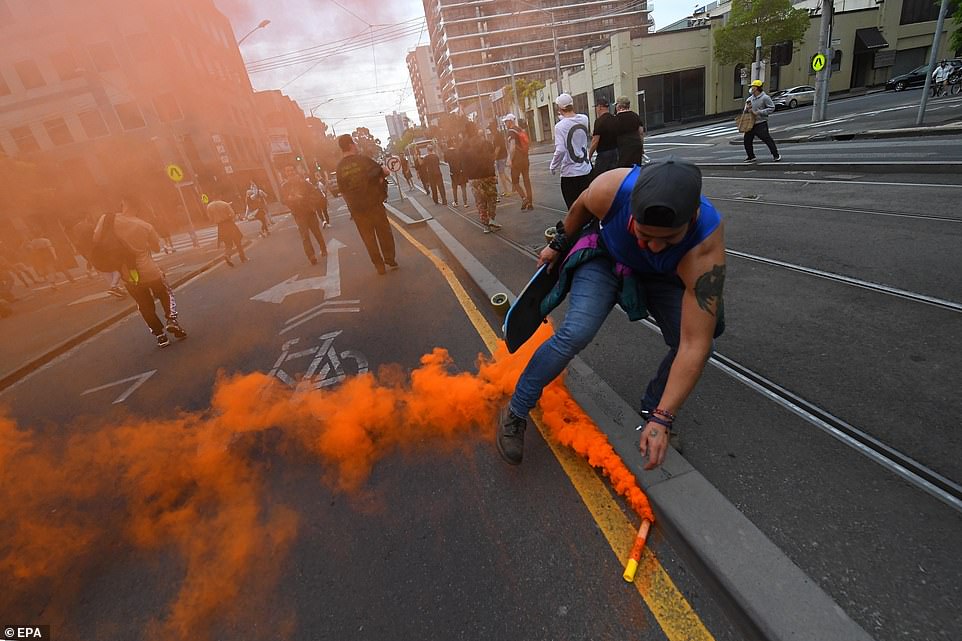 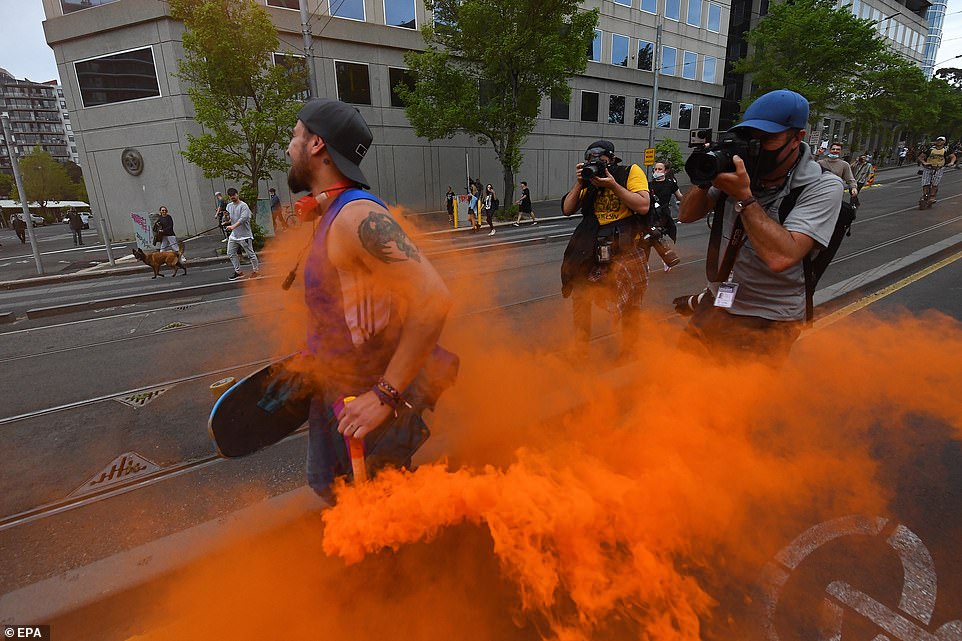 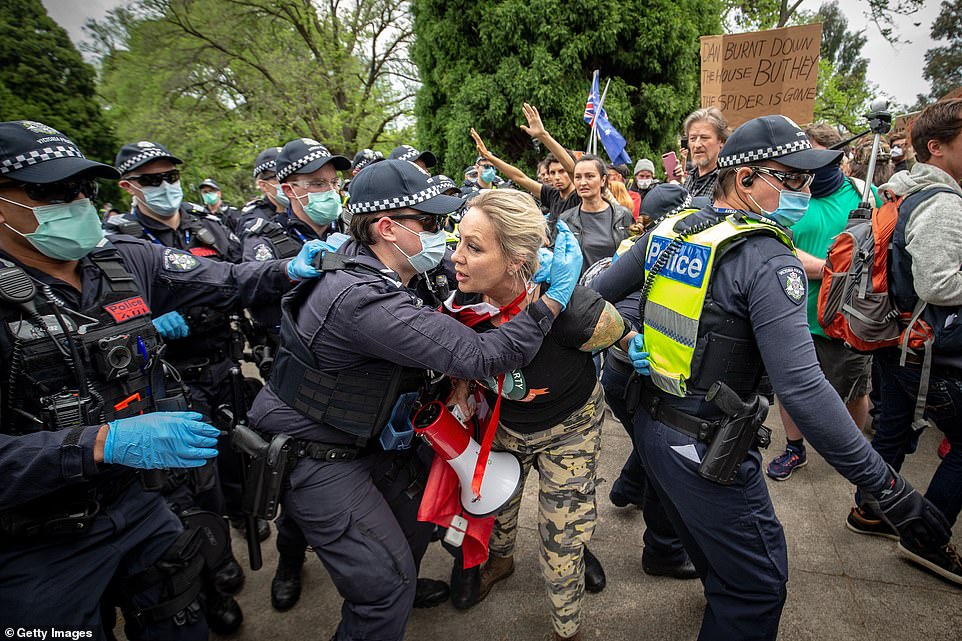 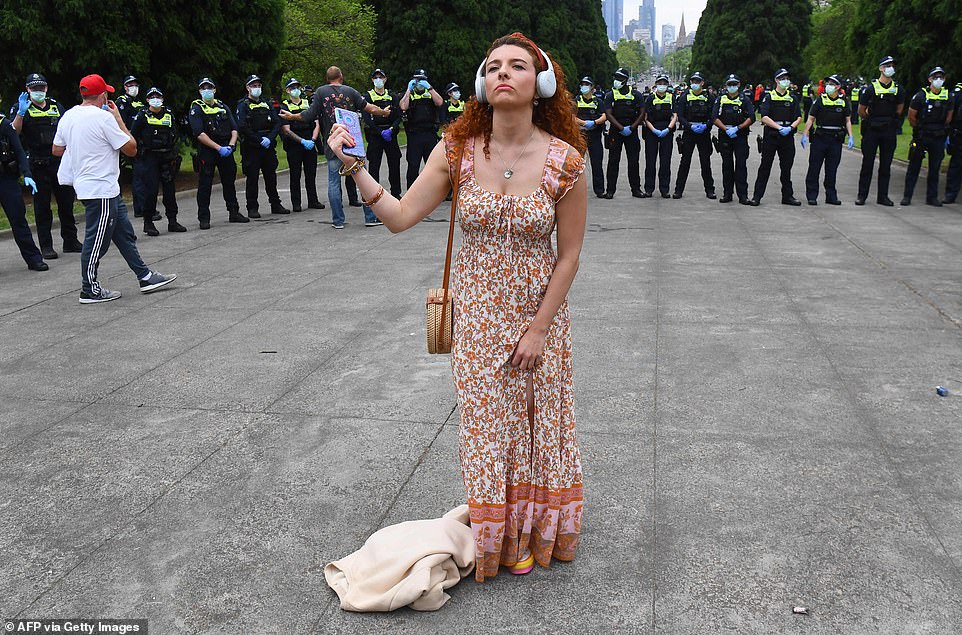 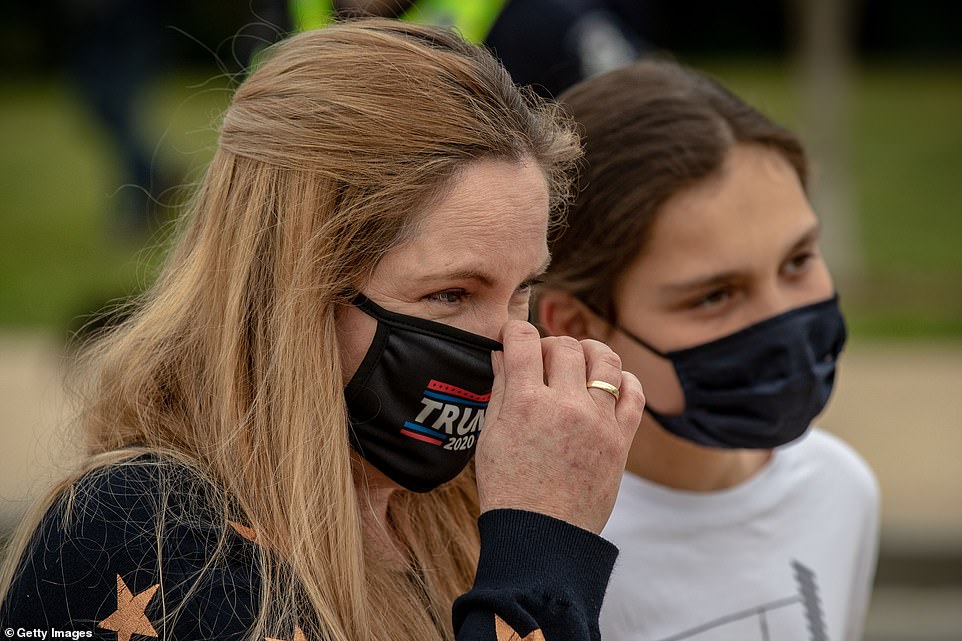 Just one year ago, on the Friday before the 2019 final players from the Richmond Tigers and Greater Western Sydney took part in the annual parade through the streets of Melbourne.

Fans gathered along the city’s streets as the teams meandered along Spring Street and Wellington Parade to Yarra Park where they took the stage in front of an excited crowd.

Manager of the London Tavern Hotel, Gina Cimarosti, would normally be hosting swarms of thirsty football fans at her corner pub ahead of Australia’s biggest weekend of sport but the beer taps are dry.

‘The Grand Final is usually the biggest day of our year,’ Cimarosti told Reuters in an empty room at the London Tavern.

‘It’s hard not to lose a bit of faith … But we’re just trying to look forward.’ 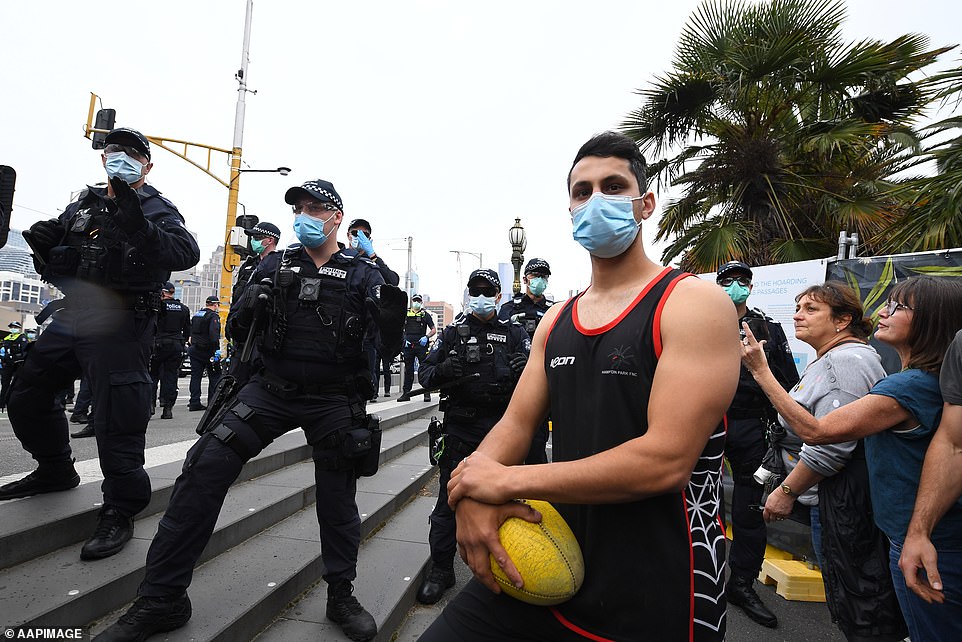 Unmasked protestors and masked police clash at the anti-lockdown protest 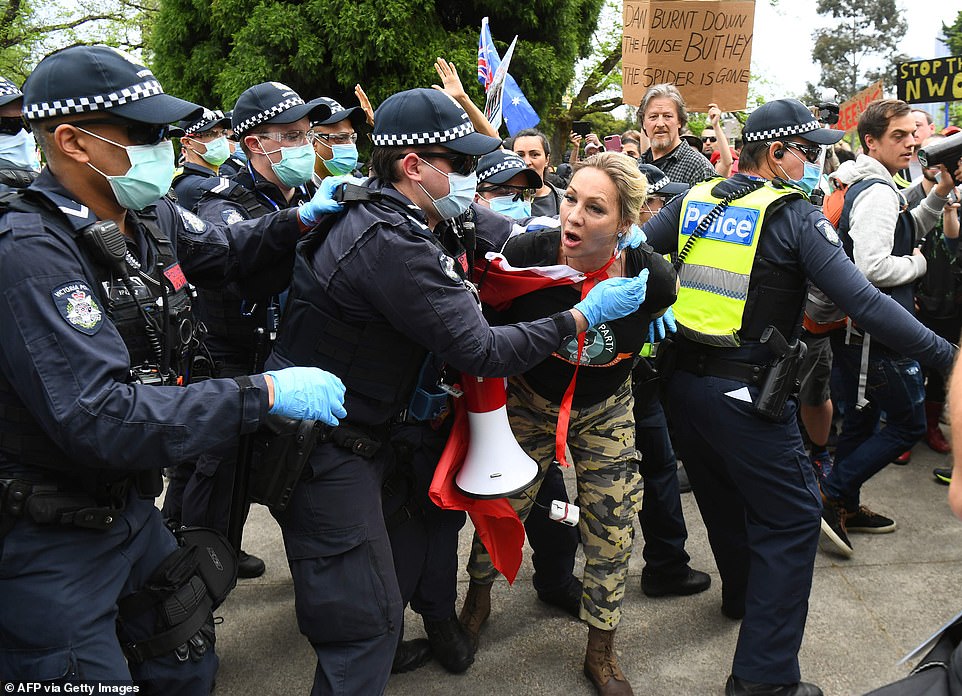 Police arrest a speaker during the anti-lockdown protest in Melbourne 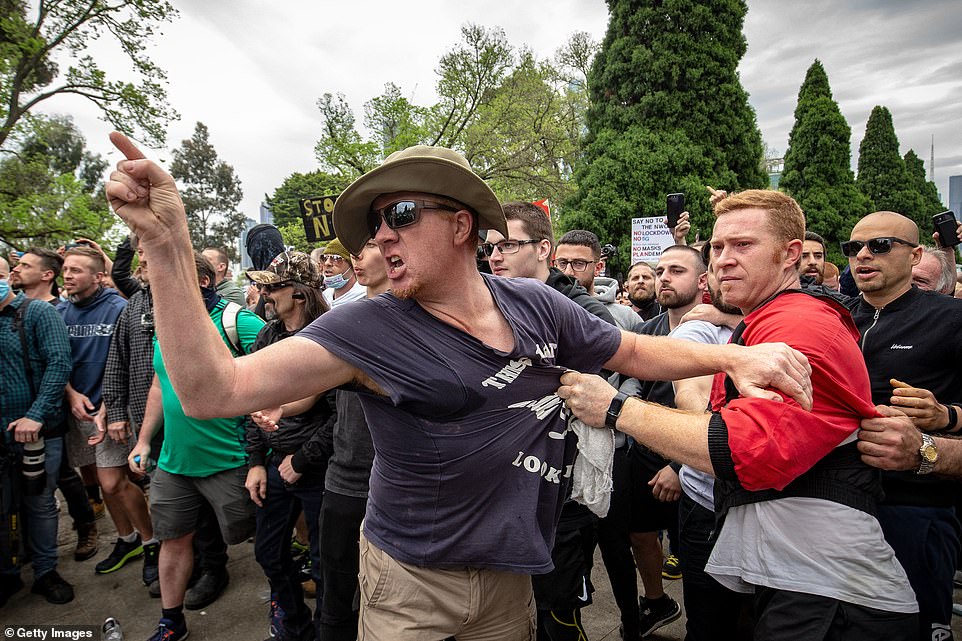 Mr Cornelius said the RSL and the Shrine have made it clear that any protest on the site is disrespectful to the memory of people who have served their country.

He said the Shrine legislation covered behaviour and how people are dressed, adding that anyone who refuses to obey police could be fined around $300. 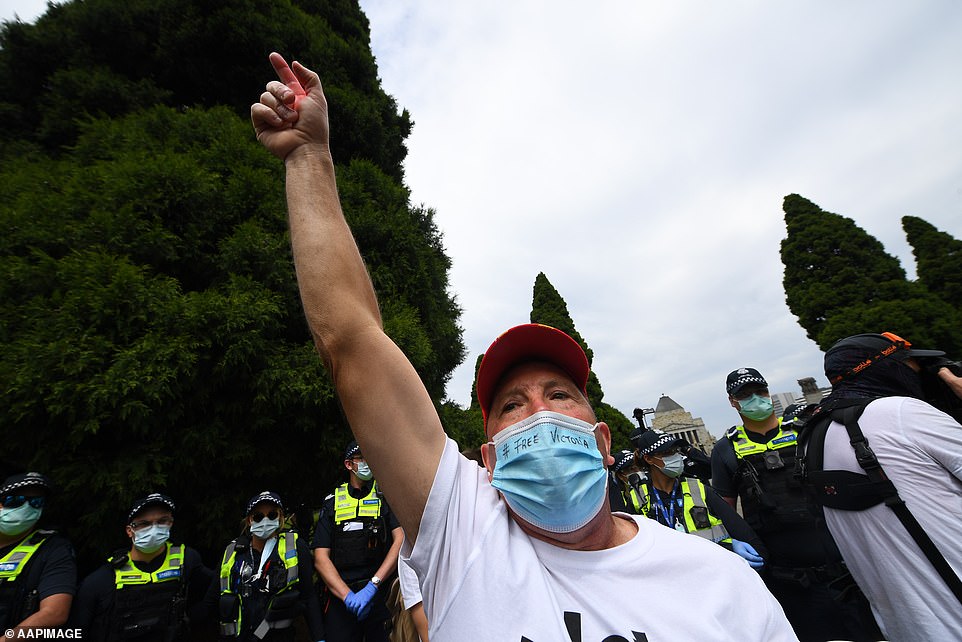 Plastic bottles were reportedly hurled at officers, with an AAP photographer at the scene confirming police have used pepper spray against the protesters 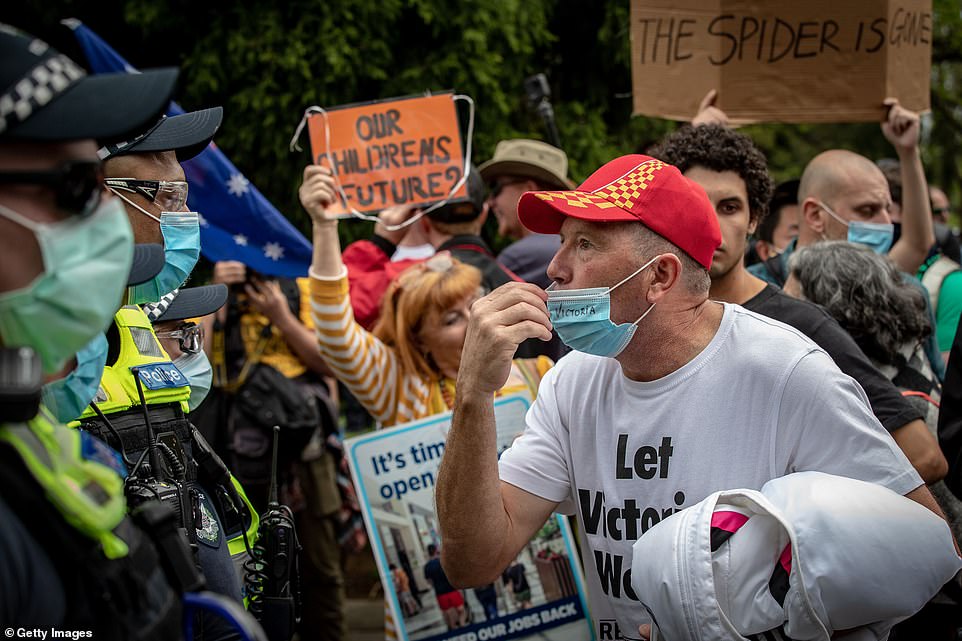 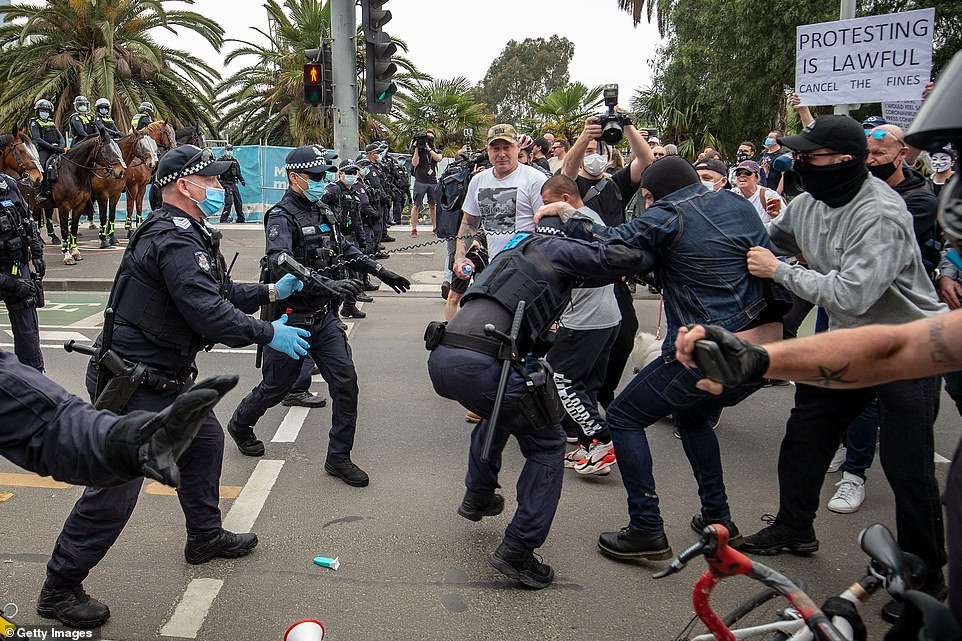 Many scuffles between police and anti-lockdown protestors broke out. Here an officer and a man in a black balaclava have a physical confrontation 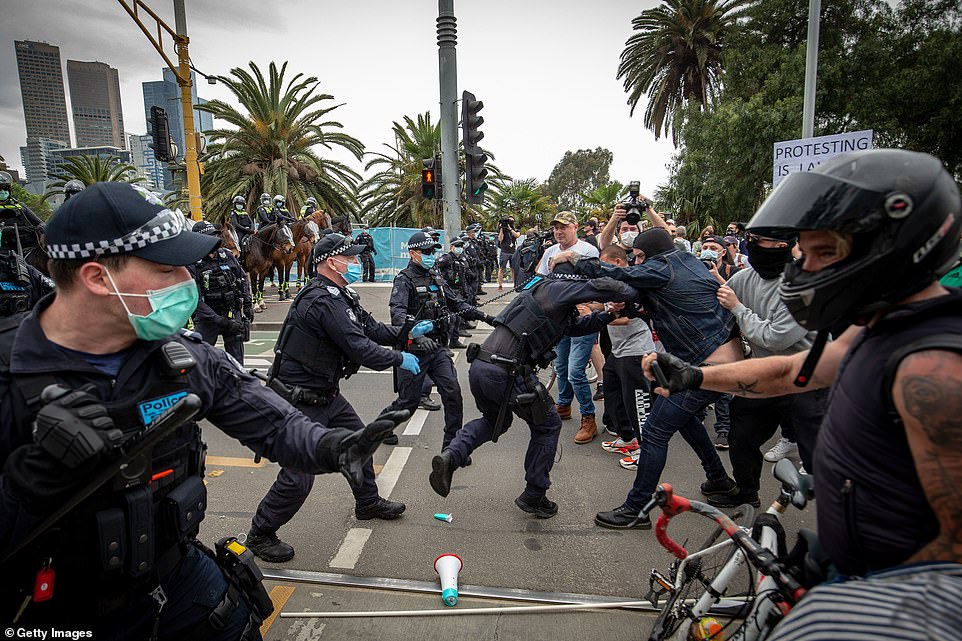 Protesters and members of Victoria Police clash on October 23, 2020 in Melbourne, Australia. Protesters are calling on the end to lockdown restrictions in Victoria following a decline in new coronavirus cases reported in the state 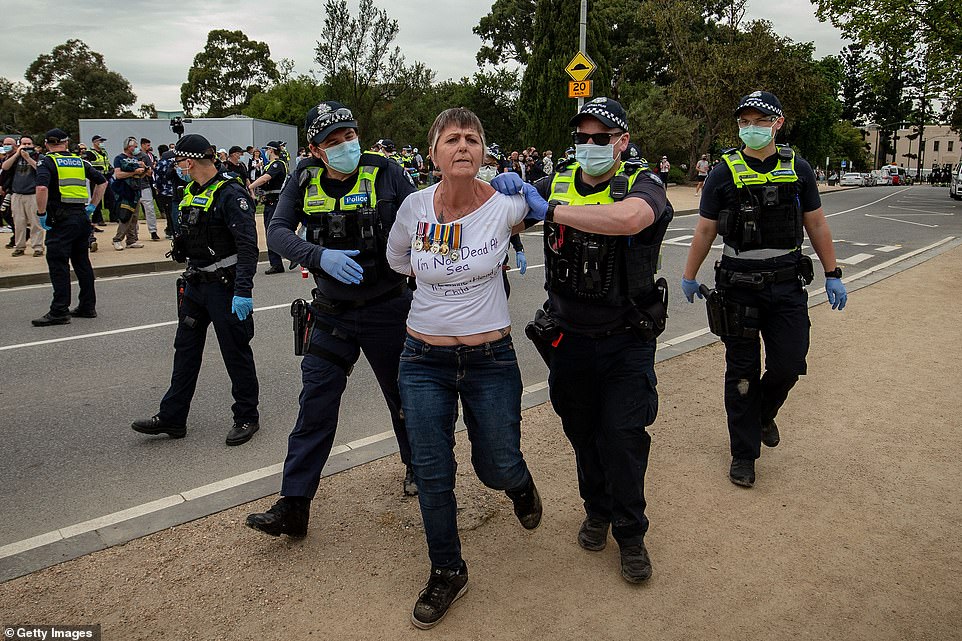 While lockdown rules have been eased this week, Melburnians can still travel no more than 25km from their homes and are not permitted to have visitors to their home unless for caregiving reasons.

They also can be fined if they gather in groups of more than 10 from more than two households, and must wear masks as well as social distance.

There were scuffles and several arrests last month as police broke up a protest at the Shrine.

A website for the Friday protest tells participants: ‘Daniel Andrews must resign and lockdowns must end. Restore our freedoms now.’ 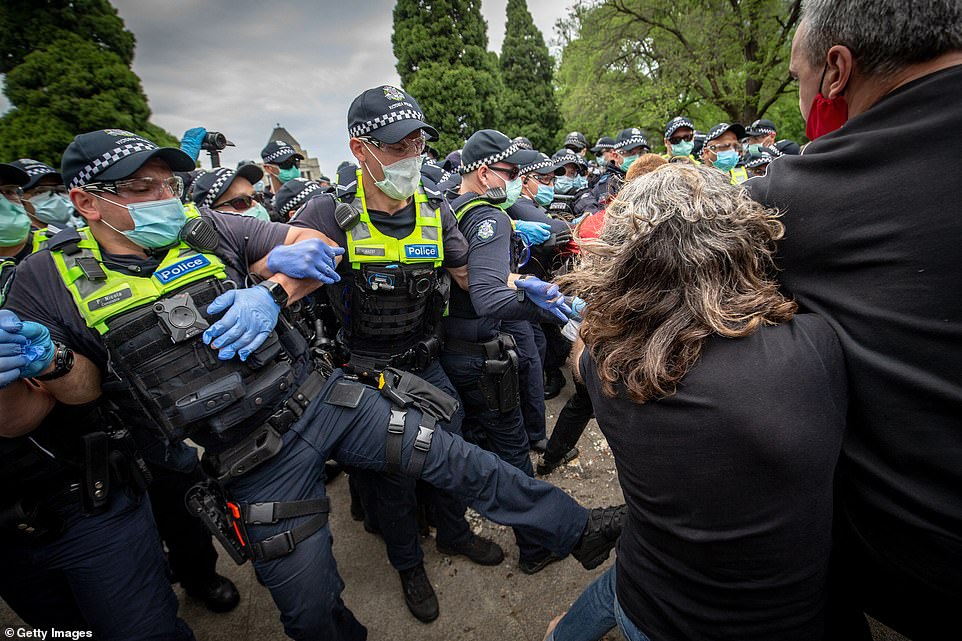 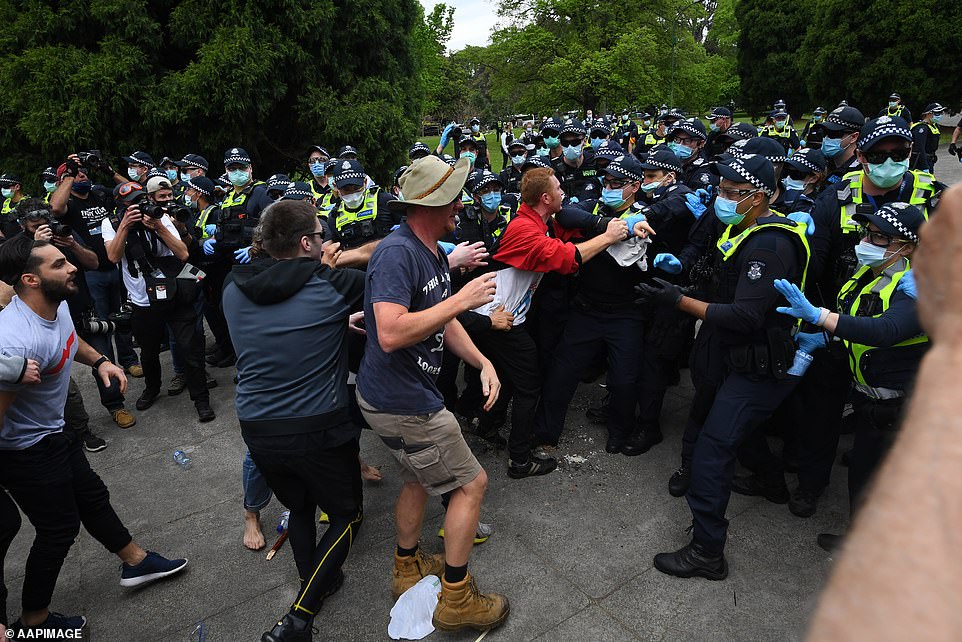 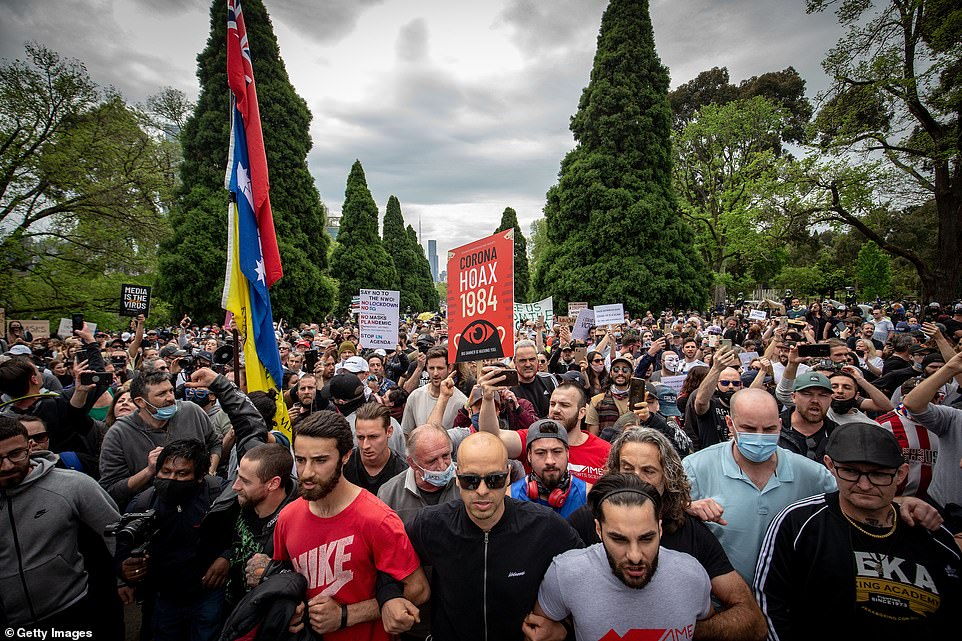 Protesters are seen linking arms as they march through Melbourne’s CBD, a placard reading ‘Corona Hoax 1984’ can be seen in the crowd (pictured) 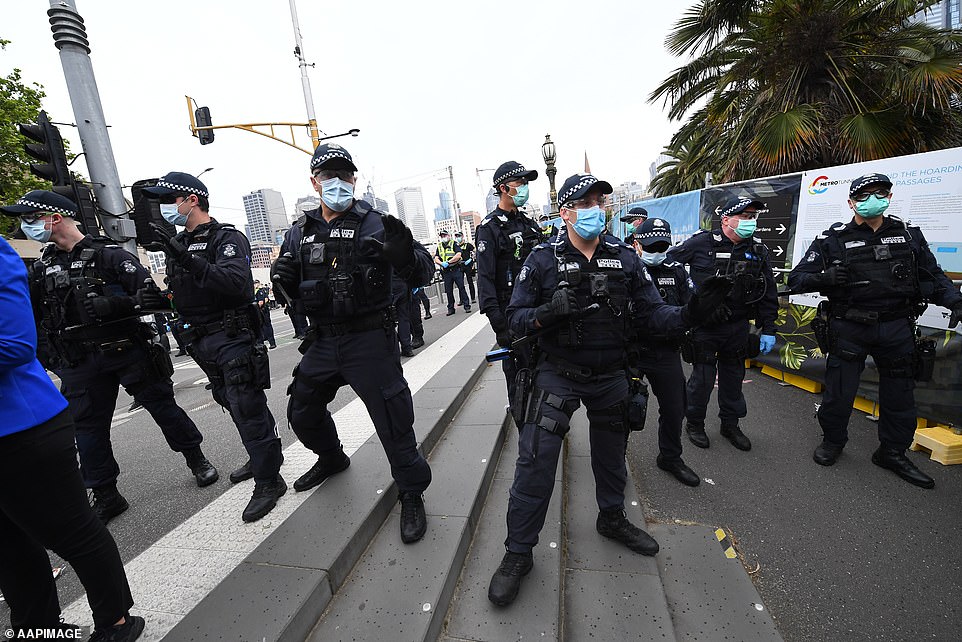 MELBOURNE’S ROADMAP OUT OF COVID-19 LOCKDOWN – WHAT YOU WILL BE ABLE TO DO AND WHEN:

Step one: Came into effect on September 14

Step three: When there is a daily statewide average of five new cases over the past 14 days. The original aim was for October 26, brought forward to October 19 after the 14-day average of new cases fell below initial expectations, but again put on hold after new case numbers plateaued.

This has now been revamped to be a series of ‘mini-steps’ and more gradual easings as the numbers proved difficult to shift.

Step four: The move to step four will come when there have been no new COVID-19 cases in the past 14 days. The aim is for this to come into place on November 23

COVID Normal: After 28 days of no new COVID-19 cases, things will return to normal.

FREEDOMS YOU GET AT EACH STEP OF EASING

Step one – came into effect September 14

– Curfew has been eased to 9pm-5am

– People can still only leave home for the four reasons (shopping, exercise, work and care or medical attention)

– Public gatherings increased to two people, or a household, for a maximum of two hours

– Schools will continue to learn remotely unless they have exemptions

– Adult education to continue to be done remotely, unless they have exemption

– Only go to work if you are in a permitted industry

– Cafes and restaurants will continue with take away only

– Retail businesses will remain open for essential shopping, with others only operating with click and collect

– Only one person per household can do the essential shopping

– Childcare and early educators can re-open

– Schools to continue with remote learning, but Prep to Grade Two and Year 11 and Year 12 students will gradually return to class in Term 4

– There will be an increase to permitted workplaces

– There are no restrictions on leaving home

– A ‘household bubble’ will be introduced, so five people from one house can visit another

– Remote learning to continue, but Grades 3 to Year 11 can gradually return to class

– Adult education to continue to be done remotely, but hands on classes will see a phased return to onsite

– Work from home is encouraged

– Up to 10 people can eat together at restaurants and cafes, with the majority of tables outdoor

– Retail shops to reopen, with hairdresses operating under safety measures but beauty stores to remain closed

– All retail stores to reopen, while real estate agents can operate with safety measures and by keeping a record of attendants

– Public gatherings have no restriction

– There will also be no restriction on visitors to homes

– Phased return to onsite work for work from home workers

– Schools to reopen as normal

– Restrictions on hospitality removed, but venues to continue keeping records

Victoria should be well and truly at step 5 now!

400 students don’t need to be kept away from school unless they are of poor health, have issues such as Asthma. This is more pseudo science.