Israel is set to begin preparations to administer fourth doses of the coronavirus vaccines as the country deals with soaring cases despite its trail-blazing roll-out of jabs.

Israel has administered at least 14,148,244 doses of COVID vaccines so far. Assuming every person needs 2 doses, that’s enough to have vaccinated about 78.1% of the country’s population.

Six million Israelis have received the first dose of the COVID-19 vaccine, 5.5 million got their second one, and 2.2 million have already received a booster shot, according to data released by the Health Ministry released a week ago. Yet it is still not enough….

The country’s national coronavirus czar Salman Zarka said the country needs to prepare for a fourth injection, which could be modified to better protect against new variants of the virus.

Where is the science here? Most vaccines are able to provide protection from other variants within the same family?

‘Given that that the virus is here and will continue to be here, we also need to prepare for a fourth injection,’ he told Kan public radio.

‘This is our life from now on, in waves.’

Salman Zarka (pictured) said the country needs to prepare for a fourth injection, which could be modified to better protect against new variants of the virus

Last month, he told The Times of Israel that people should expect to receive more vaccines to deal with new variants.

‘It seems that if we learn the lessons from the fourth wave, we must consider the [possibility of subsequent] waves with the new variants, such as the new one from South America,’ he said at the time.

‘Thinking about this and the waning of the vaccines and the antibodies, it seems every few months — it could be once a year or five or six months — we’ll need another shot.’

He added that he expects Israel to be given out vaccines that had been specially adapted to cope with different variants of the virus by late 2021 or early 2022.

While Israel is seeing record case numbers in its fourth wave, the jabs are still protecting against severe illness with Covid deaths running at about half of the level of its second wave.

Stats compiled by Oxford University-backed research team Our World in Data shows there were a record 1,892 Covid cases per million people in Israel on Wednesday — nearly 0.2 per cent of the entire population in a single day.

That was significantly higher than second worst-hit Mongolia, where the rate was 1,119 per million, and double the figures for Kosovo (980), Georgia (976) and Montenegro (909), which rounded out the top five. Israel announce all citizens eligible for booster covid jabsLoaded: 0%Progress: 0%0:00PreviousPlaySkipMuteCurrent Time0:00/Duration Time0:56FullscreenNeed Text 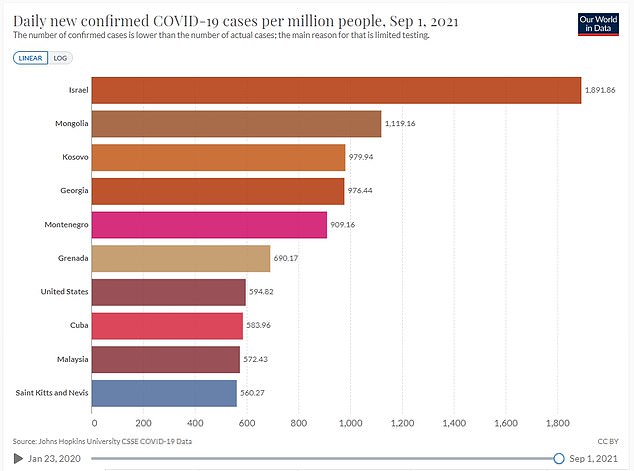 Israel has become the Covid capital of the world just months after leading the charge on vaccines, according to data that shows jab protection is waning 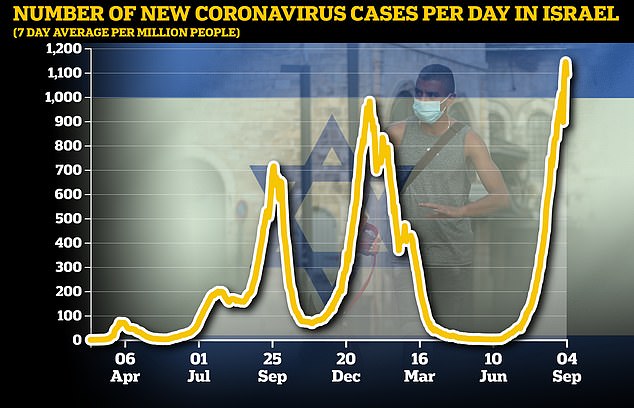 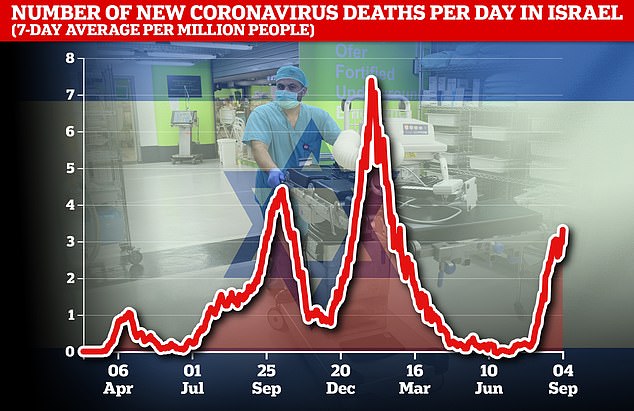 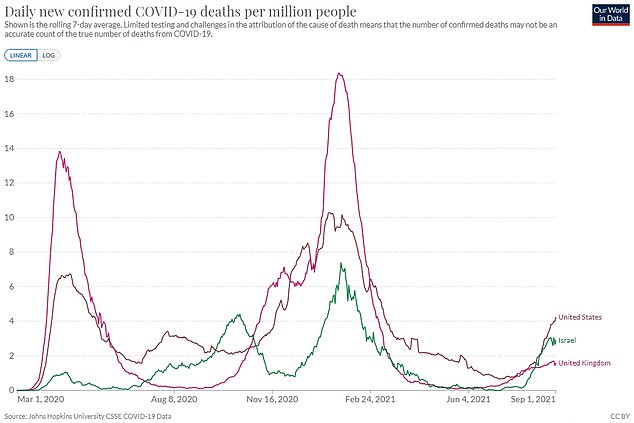 While Israel is seeing record case numbers, the jab is still offering protection against severe illness with Covid deaths running at about half of the level of the second wave, even though fatalities have been rising sharply since last month. There is now growing pressure for Britain to roll out a booster vaccine programme like Israel is doing

The figure only looks at one day’s worth of tests and Israel’s high rate is thought to have been driven up by a huge testing push ahead of schools reopening there.

But the country has consistently reported some of the highest infection rates in the world since mid-August amid an unprecedented third wave, despite being one of the most vaccinated nations in the world.

Serious cases peaked at 753 last Sunday, with the Health Ministry reporting that 654 people were in a serious condition as of Friday (September 3) afternoon.

The positive test rate was recorded at 8.43 per cent on Thursday – the highest it has been during the current wave.

Israel has been offering booster jabs to people over the age of 60 since July, and data suggests the scheme has helped to curb rising hospital admissions. The country has since expanded the top-up drive to everyone over 12 who has already had two doses. 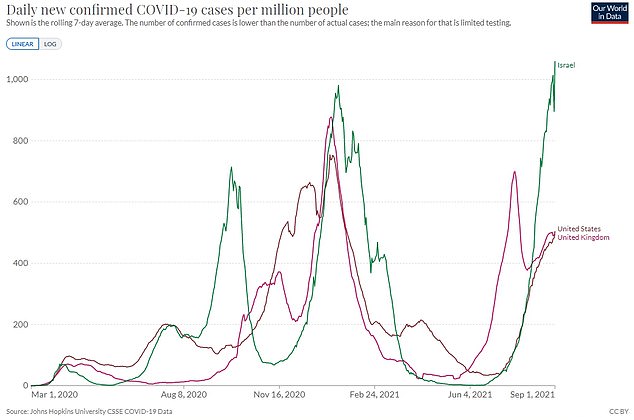 Britain’s independent vaccine advisory panel, said it was waiting on more evidence that these people would benefit from another dose and claimed that the ‘vast majority’ of Britons still had high protection — despite the UK’s cases trending in the same direction as Israel’s 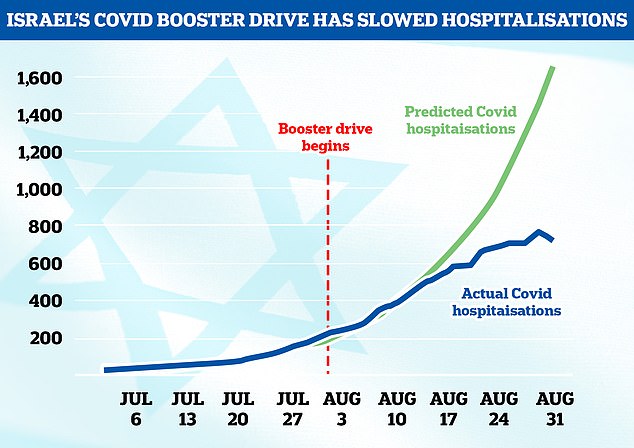 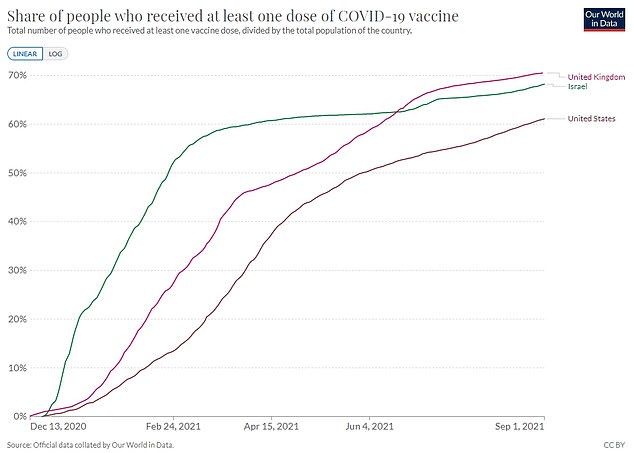 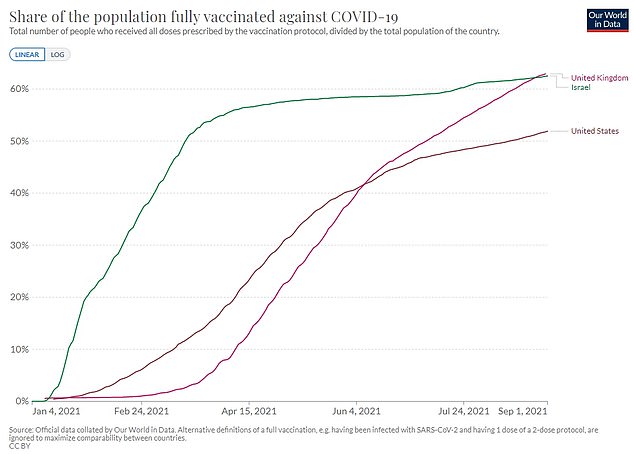 It comes after the Health Ministry in Israel announced their ‘Green Pass’ system will expire six months after the holder receives their second or third dose, hinting that a fourth dose may be administered in the next six months.

The green pass system encompasses a document which allows the holder entry into certain gatherings and public places, once they have received their coronavirus vaccination, or have recovered from the virus.

As of Thursday, the death toll in the country stood at 7,129.