By WILL STEWART and LAUREN LEWIS FOR MAILONLINE

New evidence of a huge military build-up within striking distance of Ukraine ahead of a possible invasion has emerged hours after US President Joe Biden said he believes Russia‘s Vladimir Putin will invade.

Russian troops have been told they could be away from home for up to ‘nine months’ after being moved thousands of miles from the country’s east to the border region and warned to expect being involved in a conflict in Ukraine.

Satellite images dated January 19 show a battlegroup deployed at Voronezh base around 200 miles (330km) from the Ukraine border with rows of tank artillery and support equipment massed at Yelnya, 77 miles (125km) from Russia’s border with Belarus.

Other images show military equipment gathered at two bases, Klintsky and Klimovo, that sit only 18 miles (30km) from the Belarusian frontier and no more than 31 miles (50km) from Russia’s border with Ukraine.

And, in a new development, Vladimir Putin today announced huge new naval drills to take place this month and next in four seas involving 140 warships and tens of thousands of sailors.

The war games will take place in the Atlantic, Pacific, Arctic, and Mediterranean involving ‘more than 140 warships and support vessels, more than 60 aircraft, 1,000 pieces of military equipment, and about 10,000 servicemen’, the Russian defence ministry said.

The region has been on a knife-edge since the end of last year when Moscow moved as many as 100,000 troops, as well as tanks and missiles, close to the border, but tensions have ramped up in recent days after a surge in equipment and troop movements, among them military police, from the extreme east of the country.

Videos showed trains carrying multiple rocket launchers, fighting vehicles, communication trucks and general transportation trucks over the Russian border to Belarusian bases in Gomel and Rechitsa, both of which at under 37 miles (60km) from the border are within striking distance of Ukraine.

Russia and Belarus have claimed the movement of troops and equipment is linked to hastily arranged joint military exercises between the two countries – but observers branded the explanation a smokescreen for preparations for an invasion of Ukraine which the West now expects to happen imminently.

President Biden said yesterday that the Russian strongman now ‘has to do something’ but that he believes Putin does not want full-blown war – and warned Russia would pay a ‘dear price’ if Moscow launches a military incursion.

Meanwhile UK Prime Minister Boris Johnson warned it would be ‘a disaster for the world’ if Moscow makes ‘any kind of incursion, on any scale whatever’ into Ukraine. 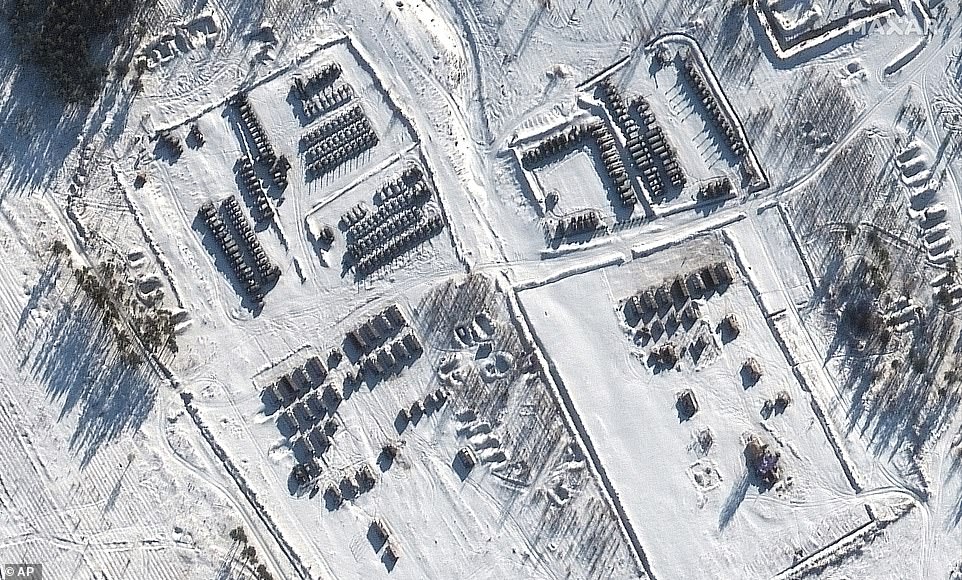 The region has been on a knife-edge since the end of last year when Moscow moved as many as 100,000 troops, as well as tanks and missiles, close to the border (pictured, a battle group deployment in Voronezh, Russia, near the Ukrainian border on January 19) 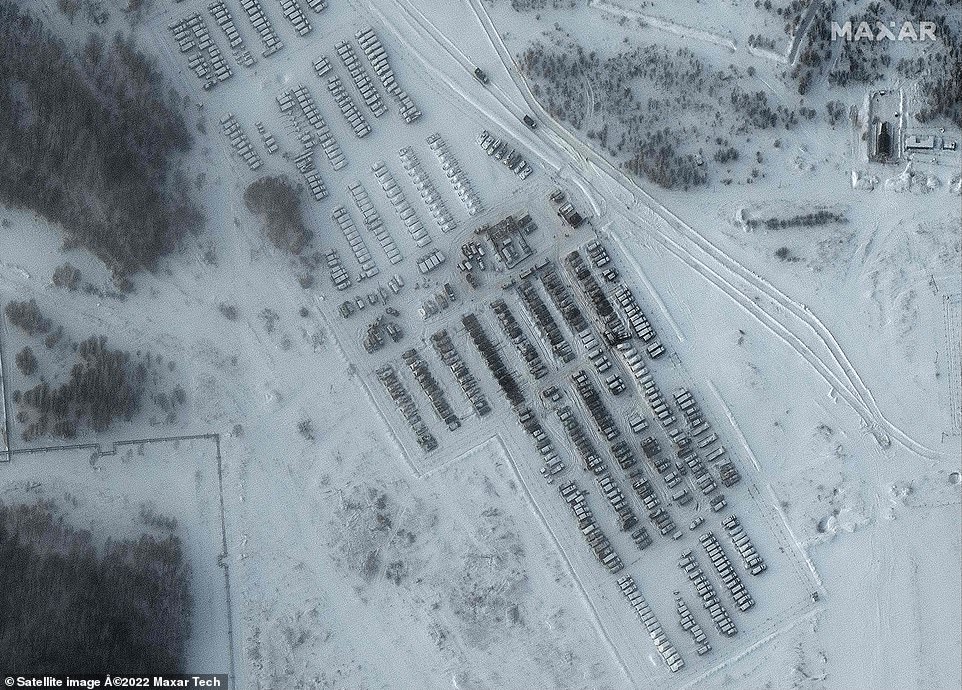 Satellite images dated January 19 showed rows of tank artillery and support equipment massed at Yelnya, 77 miles from Russia’s border with Belarus, after a months-long build-up of troops along the border with Ukraine 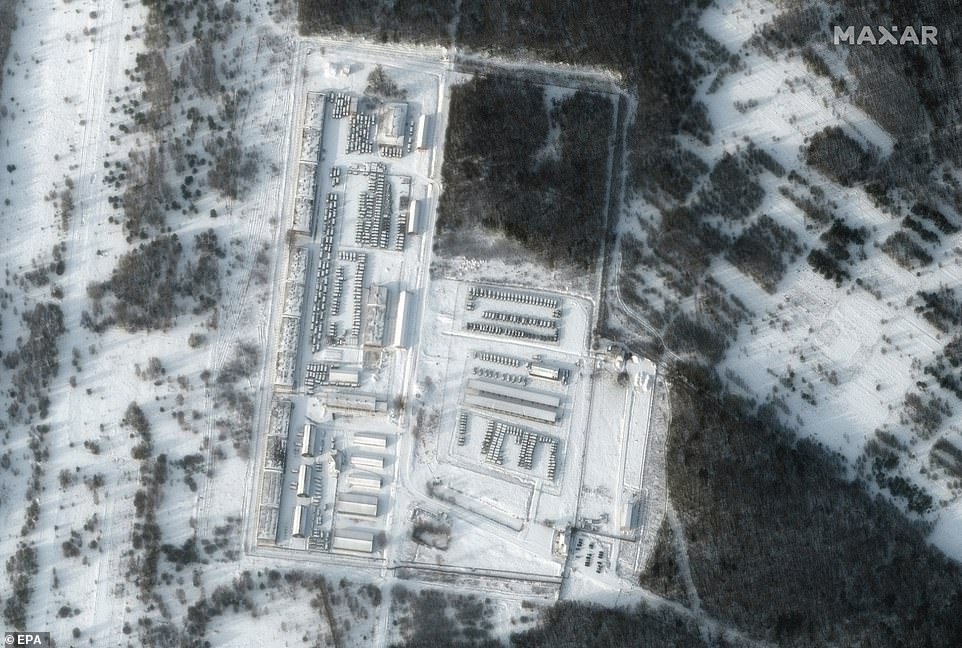 Other images show military equipment gathered at two bases, Klintsky and Klimovo, (pictured) that sit only 18 miles from the Belarusian frontier and no more than 31 miles from Russia’s border with Ukraine

Moscow has for weeks been massing tens of thousands of troops, tanks and artillery pieces along its eastern flank, sparking fears of an invasion, though the Kremlin has insisted it is merely a defence force (pictured, Russian forces currently massed in border regions)

‘He has to do something… He is trying to find his place in the world between China and the West,’ Biden said of Putin hours after announcing the US would provide an additional $200 million in defensive military aid to Ukraine in the face of Russian aggression.

But he also suggested a ‘minor incursion’ might elicit a lesser response than a full-scale invasion of the country, a comment that drew immediate condemnation from some corners with Republican senators claiming the President had effectively given Putin the green light to invade Ukraine.

Kremlin spokesman Dmitry Peskov today denounced Biden’s remarks, blaming the US president for destabilising an already tense situation. At the same time he did not rule out new security talks between Putin and Biden.

This week’s military massing in Belarus adds to Russia’s forces to the east of Ukraine as well as south in Crimea and the Black Sea, where some 100,000 are believed to be in place.

The new analyses show that only part of the military hardware and troops are going to the training grounds announced for the exercises.

‘The other part stopped halfway, near Gomel, in an area that is only 40km from the Chernihiv region of Ukraine and 90km from the Kiev region’, according to a Radio Liberty report.

Many of the comments indicated forces from the far east were sent ‘first to Moscow, then to Ukraine’ and said ‘almost all contract soldiers’ had been sent towards Ukraine.

While officially the joint Russian-Belarusian exercises last only from 10-20 February ‘relatives and friends of the military write that the trip will last 6-to-9 months.’

The massing of troops along the border has been seen as an echo of the Russian playbook from 2014 when Putin annexed the Crimean peninsula and backed pro-Russian separatists in the Donbas region of eastern Ukraine.

A Russian convoy of a BM-27 220mm multiple rocket launcher and 11 9T452 transporter-loader vehicles arrived in Gomel, Belarus, on Monday from eastern Siberia.

While footage posted online showed 11 transporter-loaders and a single BM-27 multiple rocket launcher, which later was seen in Gomel, before heading ‘directly for the Ukrainian border’ just 30km away, DFRLab reported.

Local media reported that military equipment including logistical vehicles such as fuel trucks and other transports followed by a civilian truck and bus was seen heading south from Gomel, towards the Ukrainian border.

BM-27 launchers were also seen at the railway station in Rechitsa.

While trains seen in the Smolensk region in western Russia – seemingly en route to Belarus – appeared to show 16th Radiation, Biological, and Chemical Defence Brigade from Primorsky Krai, some 5,800 miles from its base.

Ukrainian Defense Ministry’s latest intelligence assessment yesterday warned Russia had massed more than 127,000 troops along the border, together with a sea and air component that marked a ‘full strength’ force (Pictured: A convoy of Russian armoured vehicles moves along a highway in Crimea, Tuesday, January 18, 2022)