By JAMES GORDON FOR DAILYMAIL.COM

A woman who stopped to help after a truck carrying 100 lab monkeys crashed in Pennsylvania fears she’s caught an illness after one of the macaques hissed in her face, leaving her with pink eye symptoms.

Michelle Fallon, from Danville near Scranton, was driving directly behind the vehicle when it crashed, throwing animal crates all over the highway and smashing some to pieces.  Three of the macaques escaped and went on the run, but all have since been captured and humanely euthanized. All of the other monkeys – who’d arrived in the US from Mauritius that morning, and were en route to a lab, have been accounted for.

Fallon has now had a rabies shot, and wrote about the symptoms she has since suffered on Facebook – and also told PA Homepage that she’d developed symptoms of pink eye – an inflammation or infection of the eye ball.

She said: ‘I was close to the monkeys, I touched the crates, I walked through their feces so I was very close. So I called (a helpline) to inquire, you know, was I safe?

‘Because the monkey did hiss at me and there were feces around, and I did have an open cut, they just want to be precautious.’

Fallon said she got out to help both the driver and the animals in their cages, initially believing them to be cats. When she approached and put her hand on the cage, she says the monkey hissed at her.

The day following the accident, Fallon suddenly developed a cough and pink eye, which became so bad that she had to visit the emergency room at Geisinger Medical Center in Danville. 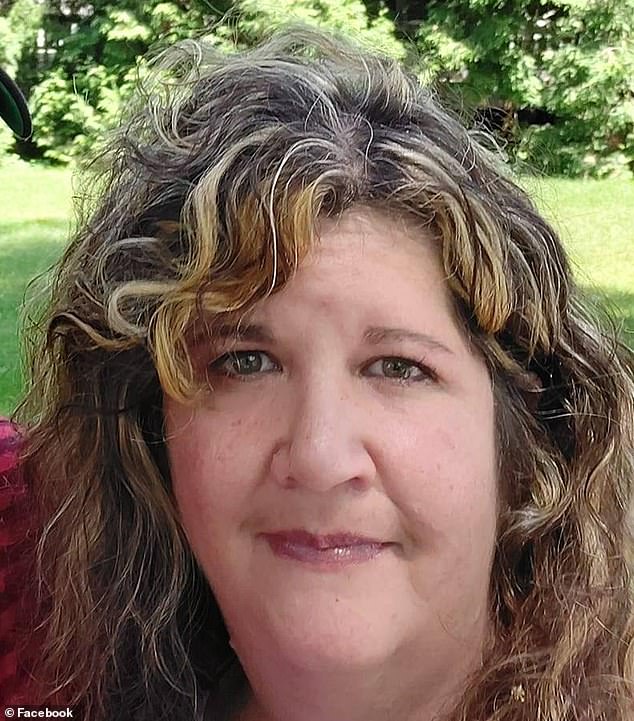 Michele Fallon, who was exposed to the monkeys on Friday after the crash said she is experiencing some side effects in her eye and has begun a course of preventative rabies treatment 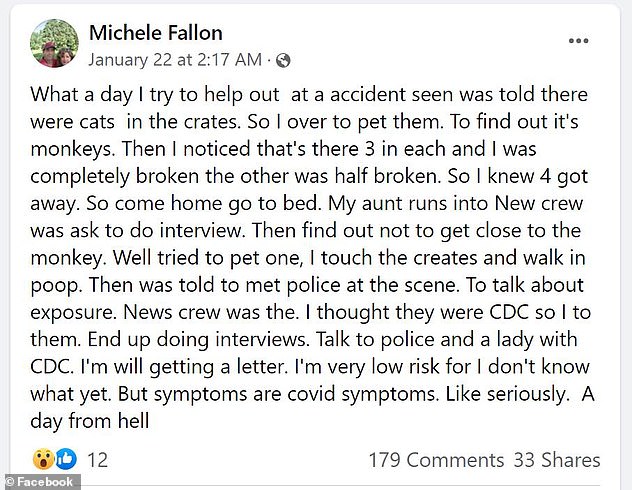 Fallon wrote of her experience on her Facebook page 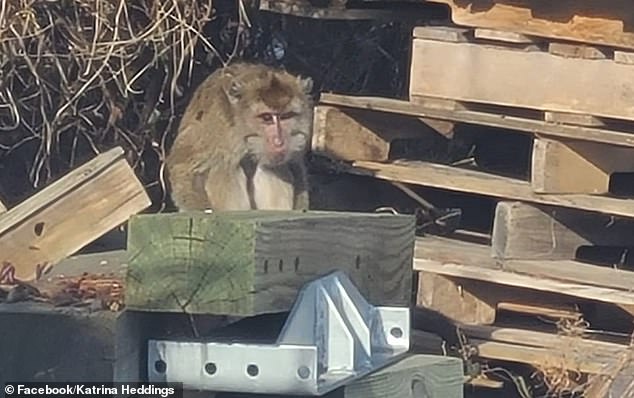 Pictured: the last of the four monkeys to be captured after the trailer they were in crashed into a dump truck on a Pennsylvania highway on Friday 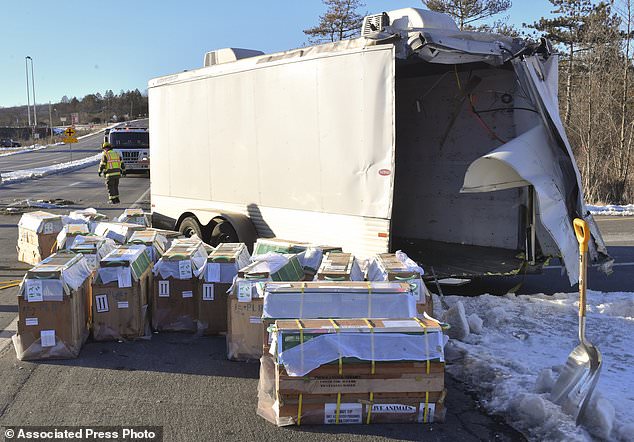 What is the monkey Herpes B virus

Contracting the B virus is extremely rare, but it can lead to severe brain damage or death if you do not get treatment immediately.

People typically get infected with B virus if they are bitten or scratched by an infected macaque monkey, or have contact with the monkey’s eyes, nose, or mouth.

You may develop small blisters in the wound or area on your body that had contact with the monkey.

There are no known vaccines to protect against a B virus infection, and so people are urged not to touch or feed monkeys.

Only one case has been documented of an infected person spreading B virus to another person.

Infectious disease doctors gave her the first of four rabies injections together with some anti-viral drugs.

She said on Facebook that she was monitoring for symptoms of rabies and monkey herpes virus B.

‘What a day! I tried to help out at an accident and was told there were cats in the crates. So I went over to pet them only to find out it’s monkeys. Then I noticed that there was three in each, with some completely broken, so I knew four had got away,’ Fallon wrote of her experience on her Facebook page.

‘I came home to go to bed and my aunt ran into a news crew and she found out not to get too close to the monkey. Well, I tried to pet one. I touched the crates and walked in poop. I was told meet the police at the scene to talk about exposure’, she explained.

‘I spoke with the police and a woman from the CDC I am getting a letter and I’m very low risk for I don’t know what yet. But my symptoms are covid symptoms. Like seriously. A day from hell!’

Fallon has been told to keep a close eye on her health for the next month in case she develops any infectious disease as a result of being so close to them.

The test monkeys were on their way to a laboratory in Florida when the truck crashed into a garbage truck.

Fallon said that she spoke with the pickup driver and a passenger directly after the crash.

The driver appeared to be disoriented, and the passenger thought he might have injured his legs, she said.

The pickup was heading west on I-80 when it got off at the Danville exit and then immediately tried to get back on, driving across the other lane.

Fallon explained how she was behind the pickup when it was hit on the passenger side by the dump truck, tearing off the front panel of the trailer and sending more than a dozen crates tumbling out.

She and another motorist who stopped to help were standing near the scene when the other driver said he thought he saw a cat run across the road, Fallon said.

Fallon peeked into a crate and saw a small monkey looking back at her, she told the newspaper.

‘They’re monkeys,’ she told the other motorist.

Jamie Labar, who was working the front desk of a nearby Super 8, said she initially thought it was a joke when someone told her of the accident.

All of the escaped monkeys were accounted for by Saturday after the Pennsylvania Game Commission and other agencies launched a search for it, amid frigid weather.

Three of the escaped lab monkeys were dead after being euthanized.

One of the cynomolgus macaques, which are also known as crab-eating or long-tailed macaques, was found in a tree, and three shots were later heard, WNEP reported.

State police had urged people not to look for or capture the cynomolgus macaque monkey following the crash on a State Route 54 near an Interstate 80 exit in Danville, about 130 miles from Philadelphia. 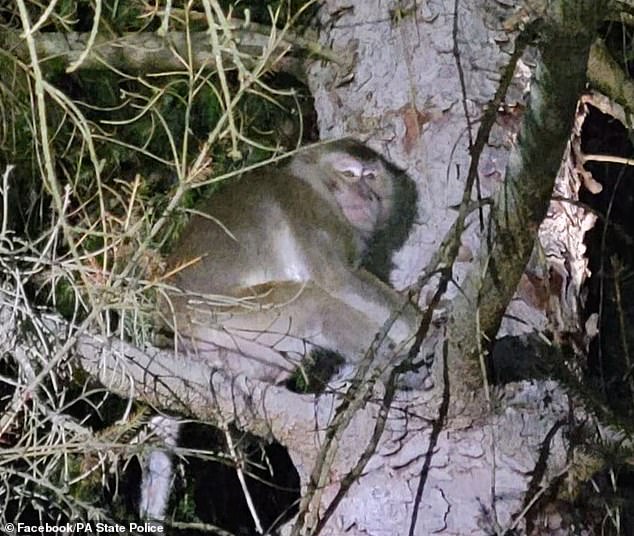 The shipment of monkeys was en route to a CDC-approved quarantine facility after arriving Friday morning at New York’s Kennedy Airport from Mauritius, the agency said.

Crates littered the road Friday as troopers searched for the monkeys, rifles in hand.

The US Centers for Disease Control and Prevention (CDC) said the agency provided ‘technical assistance’ to state police.

The truck had been on its way to a lab at the time of the crash.

The location of the lab and the type of research for which the monkeys were destined weren’t clear, but the cynomolgus monkeys are often used in medical studies.

A 2015 paper posted on the website of the National Center for Biotechnology Information referred to them as the most widely used primate in preclinical toxicology studies.

Lesher said state police secured the scene for the Pennsylvania Department of Health and the U.S. Centers for Disease Control and Prevention.

Although macaque monkeys are cute, PETA reminded residents after the crash that ‘there is no way to ensure that monkeys are virus-free,’ noting that ‘records show that monkeys in laboratories in the US have been found with tuberculosis, Chagas disease, cholera and MRSA.’

The monkey isn’t just dangerous, it’s expensive – crab-eating macaques can cost up to $10,000, according to The New York Times.

The monkeys, whose DNA is similar to that of humans, have been in high demand amid the COVID-19 pandemic, with some scientists calling for an emergency reserve of the test subjects similar to the country’s stockpiles of oil and grain.

Those who believe they may have had contact with the monkeys are asked, per the CDC letter, to seek medical attention and contact Pennsylvania Department of Health at (717) 787-3350.