Russian legislators have authorised Vladimir Putin to use military force outside the country, a move that could pave the way for a wider invasion of Ukraine after he rolled troops into rebel-held areas.

The unanimous vote in the upper house of parliament formalises the Russian strongman’s order to send troops into Ukraine’s breakaway eastern regions and allows him to use military force outside of Russia with immediate effect.

Holding a press conference to defend his decision today, Putin raised fears he is about to stage a land-grab in eastern Ukraine by saying his ‘peacekeeping’ mission will cover the whole of Donetsk and Luhansk regions including areas held by Ukraine. Russia still has around 190,000 troops massed on the border.

It is thought more than 10,000 Russian troops have now moved into rebel-held areas of Donetsk and Luhansk, with videos revealing columns of tanks rolling through the streets in the early hours. Some 6,000 troops were sent to Donetsk, 5,000 to Luhansk and 1,500 to the city of Horlivka, a source with links to Ukrainian intelligence said.

Putin denied that Russia has already sent in troops but vowed that he will ‘fulfil its obligations’ if necessary. He also issued a fresh list of demands to Ukraine – calling on Kiev to drop its NATO bid, declare neutrality, ‘demilitarize’, and negotiate directly with separatists. It is expected the demands will be rejected out of hand.

Meanwhile the White House began describing Putin’s actions as an ‘invasion’ following hours of dithering, paving the way for Joe Biden to impose crippling financial sanctions on Russia and send more U.S. troops to the Baltic states on NATO’s eastern flank after his resolve initially appeared to be wavering.

‘We think this is the beginning of an invasion… and you’re already seeing the beginning of our response, that we said will be swift and severe,’ Biden’s deputy national security advisor Jonathan Finer said early Tuesday, after top aides had shied away from using the word overnight.

As Russia’s troops rolled in, fighting in the region escalated – with shells striking a power plant on the Ukrainian side of the line Tuesday morning after explosions killed two of Kiev’s men and wounded 12 overnight.

German Chancellor Olaf Scholz had earlier led the Western response to Russia, ripping up a deal to open the Nord Stream 2 gas pipe – a move that will cost Russia billions of dollars in revenue but also hurt his own economy, saying that Putin’s actions must have ‘consequences’.

Boris Rotenberg, a former judo training partner of Putin, is the co-owner of SMP Bank while Igor Rotenberg is his nephew. Igor became a billionaire after being handed a raft of investments by his father Arkady – who is currently fighting his ex-wife over ownership of a £27 million mansion in Surrey.

Timchenko is Russia’s sixth richest man thanks to his ownership of investment firm Volga Group, and also an ice hockey fanatic.

The EU also announced new sanctions on Russia that will blacklist more politicians, lawmakers and officials, ban EU investors from trading in Russian state bonds, and target imports and exports with separatist entities – but they did not go as far as sanctioning Putin. 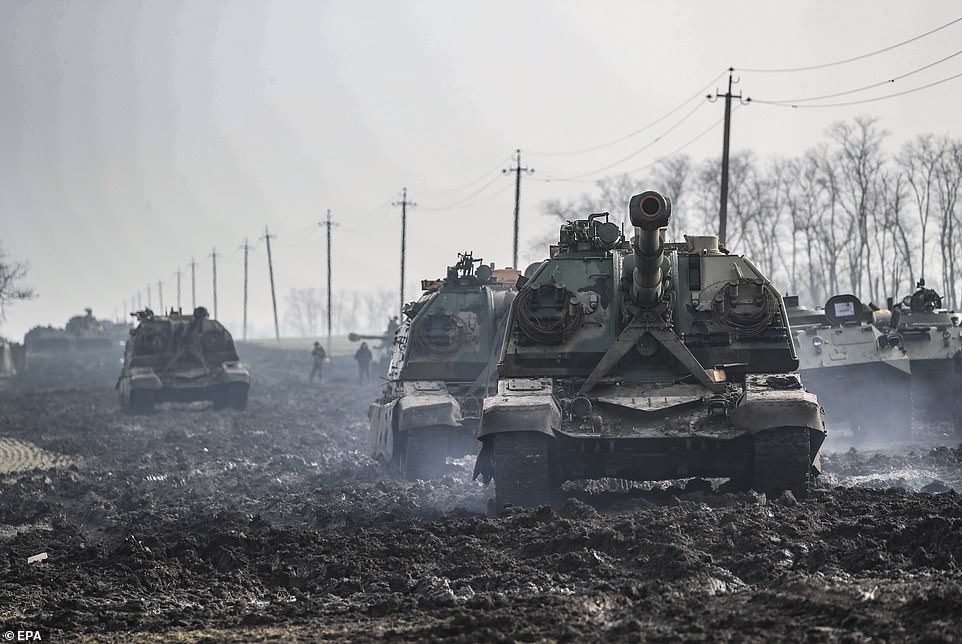 Russian artillery pieces are pictured in Rostov-on-Don, on the Russian side of the Ukrainian border, on Tuesday – as Vladimir Putin ordered his forces to advance on to Ukrainian territory 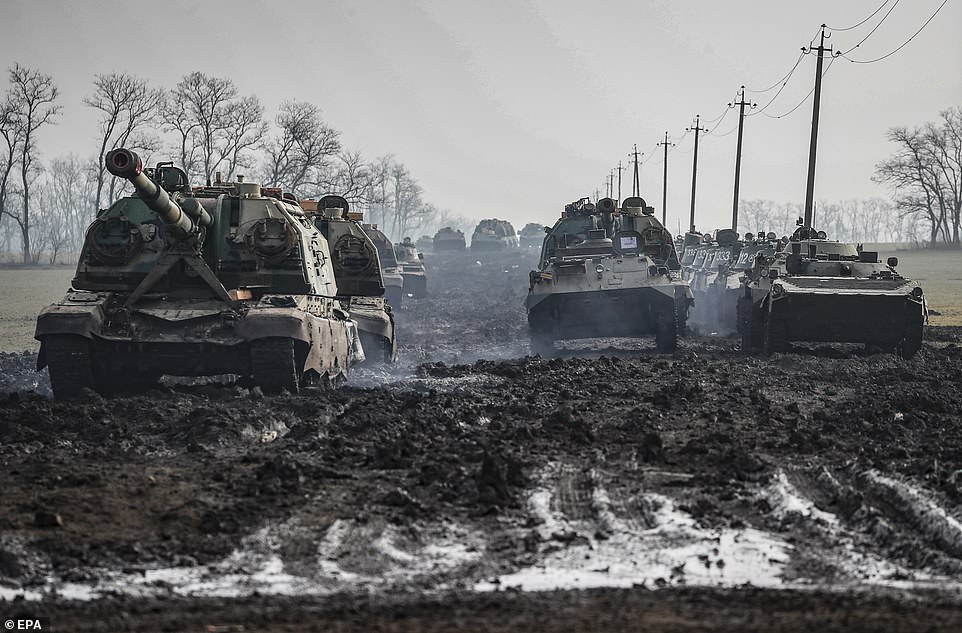 Russian mobile artillery and armoured troop carriers are seen in Russia’s Rostov-on-Don region on Tuesday, close to the border with Ukraine’s separatist-held areas 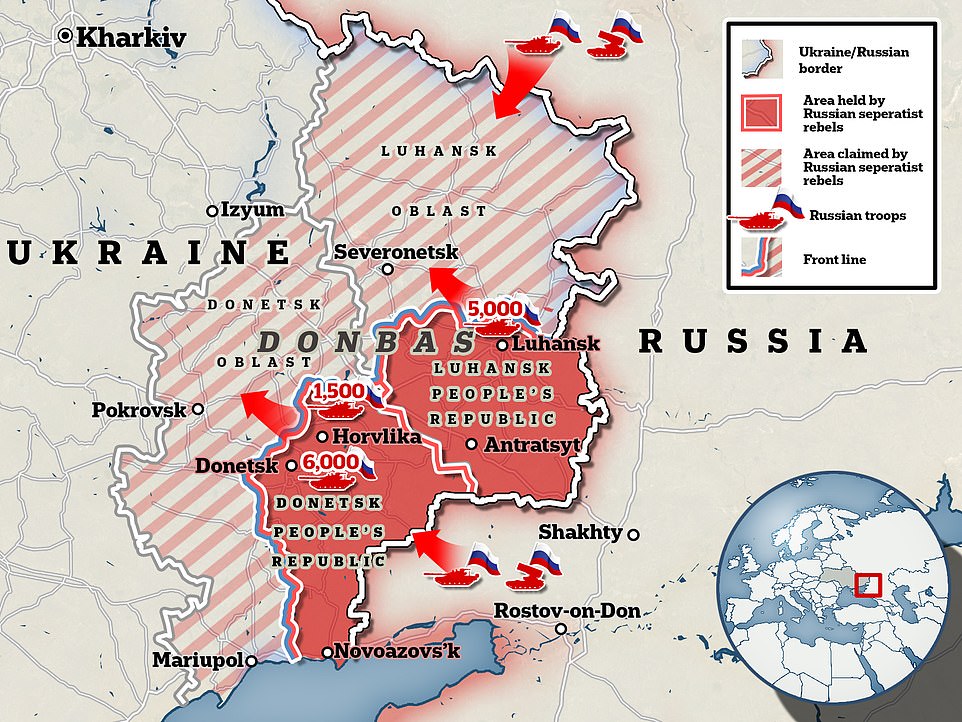 Putin is thought to have moved thousands of troops into rebel-held areas of eastern Ukraine today (dark red area on the map), but there are fears he will try to seize control of the wider regions that separatists lay claim to (lighter shade area) 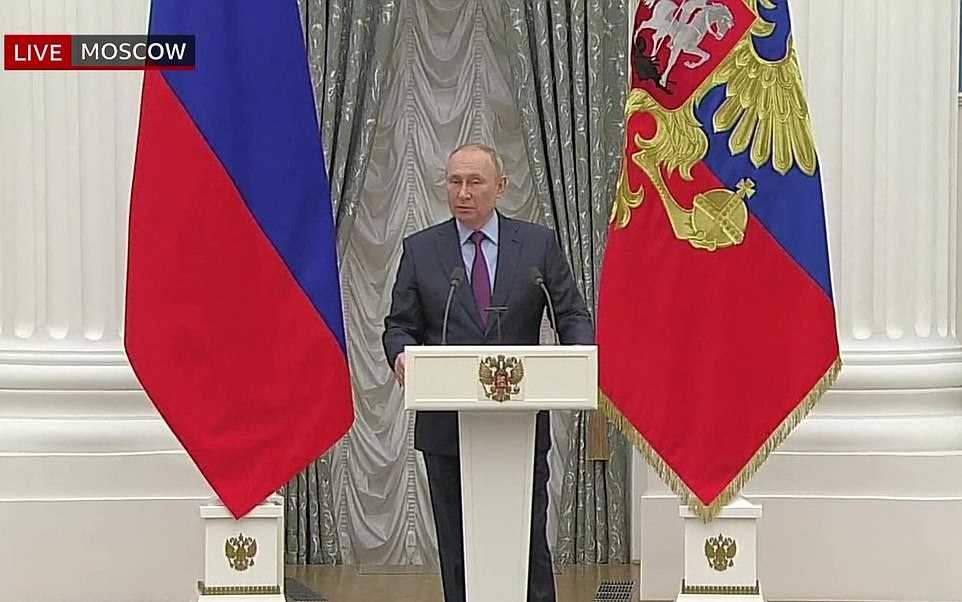 Vladimir Putin gave a press conference defending his decision to roll into eastern Ukraine today, vowing that Russia stands ready to ‘fulfil its obligation’ to defend the regions if necessary

Civilians in eastern Ukraine live in fear as shelling intensifies 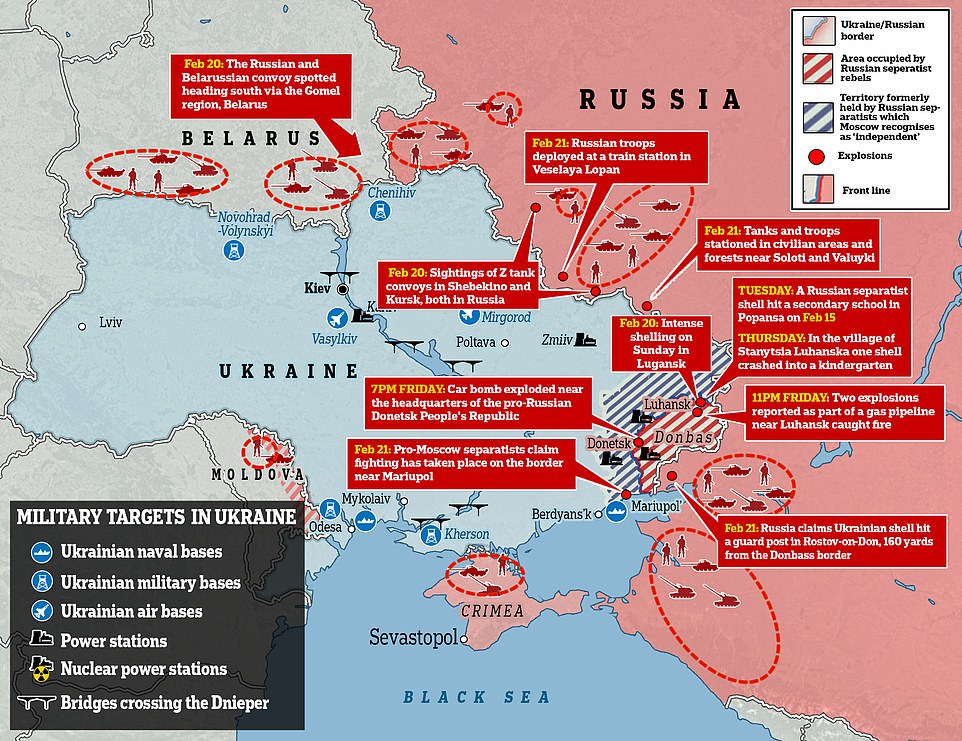