By HARRIET ALEXANDER FOR DAILYMAIL.COM

Tucker Carlson on Tuesday night accused President Joe Biden of waging war on the middle class, saying his decision to stop buying Russian oil would not sway Vladimir Putin and only served to harm American consumers, and arguing that Biden was using the invasion to promote his green energy policies.

Biden on Tuesday announced that the U.S. will stop buying Russian oil, which currently amounts to 670,000 barrels a day.

Canada is currently the United States’ largest supplier of oil, but cannot make up the difference alone. Instead, Biden officials have been reaching out to Venezuela and Saudi Arabia to try and encourage them to turn on the taps and lower the price of oil, which is currently at a 14-year high.

Carlson said that Biden was using the conflict to push his own green energy policies.

‘Because Putin invaded Ukraine, effectively encouraged by the Biden administration to do that, which is true, because that happened, we are going to send billions of dollars to the Saudi theocracy and then to the Iranians and then to Nicolas Maduro in Venezuela and at the same time, we’re going to embrace green energy, which means giving the government of China complete control over a power grid here in America,’ Carlson told his viewers.

‘That’s our plan. Are you confused by it? Don’t be. It’s a moral victory. Let us know when you get tired of winning.’ 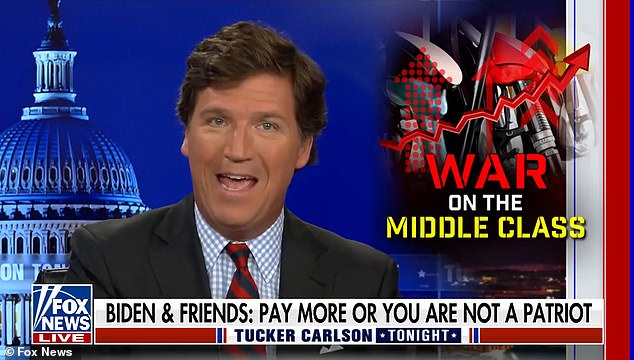 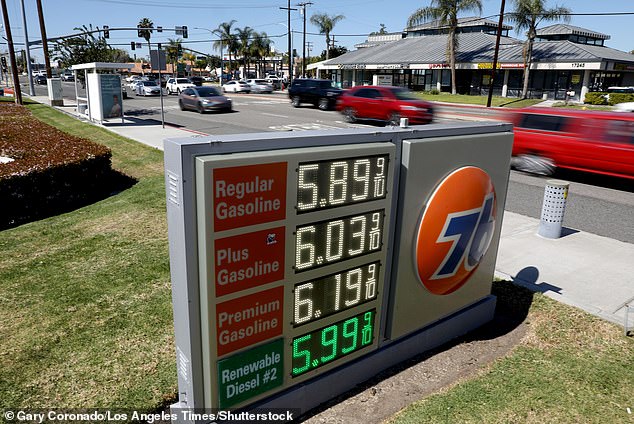 A gas station in Tustin, California, is seen on Tuesday with gasoline at remarkably high prices

The Fox News host, who has long questioned why Biden was supporting Ukraine in its battle against Russia, said that the White House’s means of punishing Putin were harming ordinary Americans.

‘Why exactly are we doing this? What’s the point? Is the point to bankrupt Vladimir Putin? That might be worth doing, but this won’t do it,’ Carlson said.

‘Putin already has ready markets around the world for his oil, starting in China, in India and Turkey. So that’s not going to work.

‘Maybe the point is to force Russian troops to withdraw from Ukraine. That would definitely be worth doing, but no, that’s not the point, either.’ 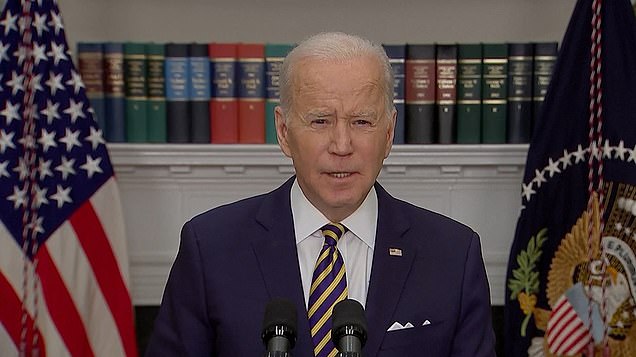 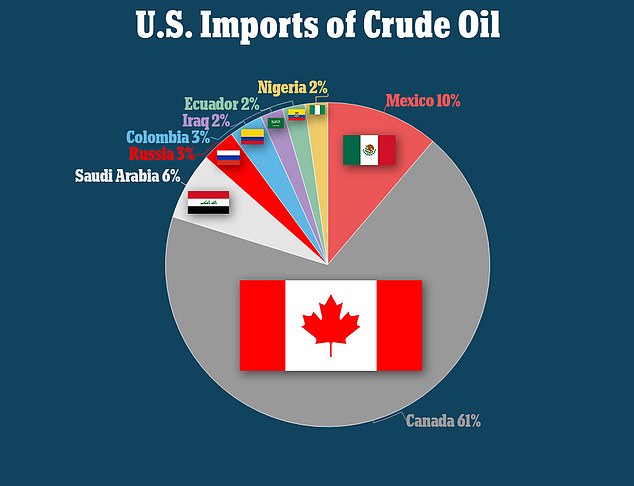 Above shows a chart for US crude oil imports, which should include Russia, excludes other petroleum products 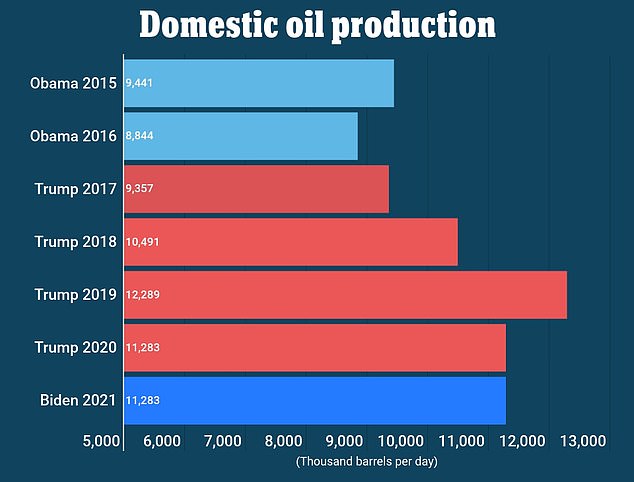 What does ‘energy independence’ mean?

Both Democrats and Republican lawmakers are calling for a path to American energy independence, though they have different ideas about how to get it done.

To be ‘energy independent’ means to export more oil, gas and coal than is imported each year.

In theory it could also describe a nation that exclusively exists on its own fuel sources — though with a vast number of global transit lines and how natural resources are distributed around the country, the latter definition is near impossible to achieve in the US.

Americans consumed roughly 20 million barrels of liquid fuel per day in 2021, according to the Energy Information Administration.

The United States exported an average 8,632 barrels of crude oil and petroleum per day last year.

And as of February 25, the EIA stated there were 580 million barrels in the strategic reserve.

However even if the US were to produce more oil than it buys — as was the case in 2020 —  it would still be far costlier and more cumbersome for energy companies to sell that oil in parts of the country.

For example, the Wall Street Journal points out that oil companies shipped about 3 million barrels per day out of the US Gulf Coast.

Pipelines from the Gulf Coast lead to the southwestern Permian Basin and the crude oil storage hub in Cushing, Oklahoma that’s home to 14% of total US oil storage.

Thanks to the 1920 Jones Act, US  companies are limited in the size of ships they can use to transport goods between domestic ports.

That effectively makes it costlier for oil to be shipped from there to the East and West Coasts, for example, which have more direct access to overseas markets.

‘Joe Biden will typically say absolutely anything, but even Joe Biden didn’t claim today that sanctioning Russian oil will end the war in Ukraine because it won’t.

‘So, who exactly are these sanctions aimed at? Think about it. If you want to identify the target of a penalty, consider who’s going to suffer most from it.

‘Notice a theme here? The people in charge hate the middle class above all.

‘So, it’s not Vladimir Putin who’s getting punished, it’s American citizens. It’s you. It’s not speculation.’

Biden, on his first day in office, signed an executive order halting the construction of the controversial Keystone XL pipeline, which would bring oil from Canada across the U.S. and down to the Gulf of Mexico.

Carlson accused Biden of ‘holding back domestic energy production’, despite Biden saying his administration produced more oil in its first year than Trump did in his.

‘Vladimir Putin did not do that. Joe Biden did it.’

Biden on Tuesday said he ‘can’t do much’ about record high gas prices and continued the White House blame game of saying it was Vladimir Putin‘s fault.

Biden even predicted it would get worse with prices at the pump – which hit a record $4.173 – going higher.

‘They’re going to go up,’ Biden said when asked his message for Americans on gas prices.

And asked what could be done about it, Biden responded: ‘Can’t do much right now. Russia is responsible.’

His comments came after he banned Russian oil imports into the United States – a move he acknowledged earlier Tuesday could raise gas prices even further.

Regular gasoline hit $4.173 per gallon on average on Tuesday, up 11 cents in just one day and 72 cents higher from a month ago, shattering the prior national record of $4.11 set in 2008, according to the AAA Gas Price Index.

The price of regular broke $4 a gallon on Sunday for the first time in nearly 14 years. 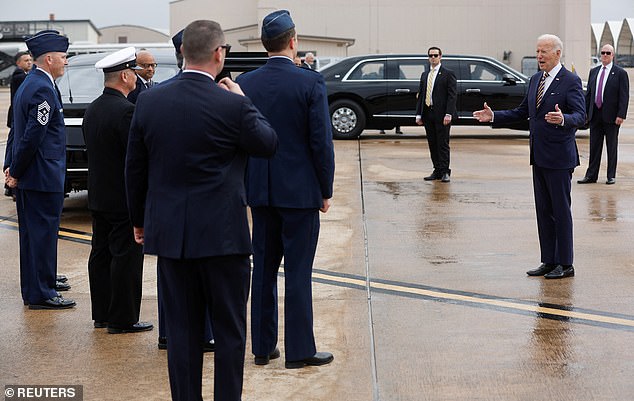 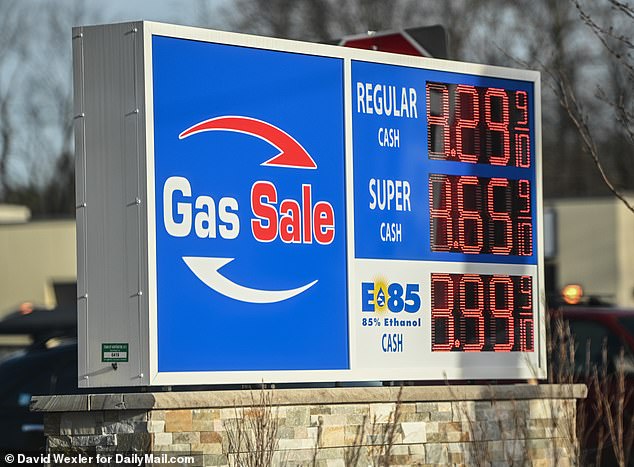 Regular gasoline hit $4.173 per gallon on average on Tuesday, up 11 cents in just one day

The White House has blamed the Russian invasion of Ukraine for the record prices even though gas prices were moving upward before Putin made his move.

‘This is a Putin spike at the gas pump, not one prompted by our sanctions,’ White House press secretary Jen Psaki told reporters on Air Force One on the way to Texas, where Biden would speak on veteran’s health.

The White House has repeatedly pushed back on questions on whether the administration could do more to give Americans financial relief.

‘Federal policies are not in limiting the supplies of oil and gas,’ Psaki said in her press briefing on Monday. And she defended White House action, arguing the administration has released oil from the strategic reserve, that there are 9,000 approved drilling permits not being used, and that they are in talks with oil companies.

Before he headed to Texas, Biden announced  a ban on energy imports from Moscow, which he acknowledged would rattle world markets and likely drive up gas prices even higher.

A majority of Americans support his move. In a Wall Street Journal poll, 79% said they favored a ban on Russian oil imports even if it increased energy prices in the U.S.. Just 13% said they opposed it.

The support was bipartisan: The ban received 77% approval from Republicans and 72% of voters who said they would support former President Trump if he ran again in 2024. Among Democrats, 88% said they favored the moratorium on Russian oil imports.

Biden said the ban was necessary as it would target ‘the main artery of Russia’s economy.’ The United States and its allies are trying to hurt Putin financially in order to get him to back down from his invasion.

‘Americans have rallied support – have rallied to support the Ukrainian people and made it clear we will not be part of subsidizing Putin’s war,’ Biden said at the White House.

During his speech Biden also hit back at Republican accusations that his administration cut back US oil and gas production — pointing out that he actually pumped more oil than his predecessor Donald Trump did during his first year in office.

Biden insisted American fuel independence could be achieved by transitioning to clean energy which Republicans have claimed that such efforts led the US to today’s vulnerable position and high gas prices.

Just 7% of America’s imported oil is Russian, so why is Biden choosing ‘terrorists over Texans’? Experts say ban wouldn’t impact supply and US wells or Canada could plug the gap instead of ‘funding Putin’s war chest’

Where does the US get its oil?

Following Canada is Mexico, 8.4 percent, then Russia, 7.9 percent, then Saudi Arabia, 5.1 percent, according to 2021 statistics from the Energy Information Agency.

How much have Russian oil imports increased under the Biden administration?

‘That massive infusion of petrol dollars into Putin’s war chest has helped fund his misadventures in Ukraine.’