Masks are worn everywhere in the densely-populated Asian city while New Zealanders are forced to wear them in all indoor public places, such as shopping centres and libraries.

But both now have higher case numbers per million than Australia, where compulsory mask rules have been abandoned in most indoor settings. 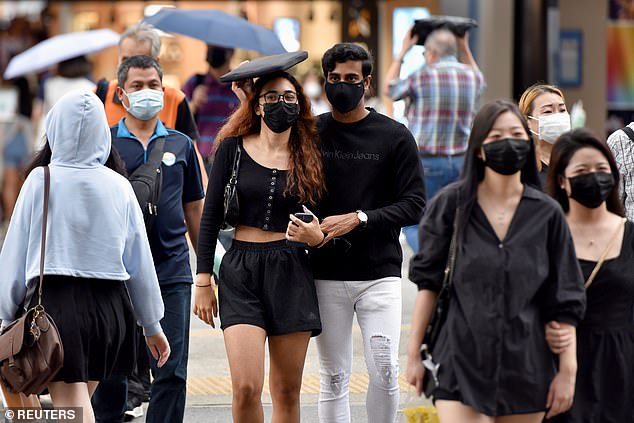 Shock data has revealed Covid case numbers in New Zealand and Singapore – where masks are reularly worn all the time outdoors, as seen here – have overtaken Australia in the latest Omicron wave despite ultra-strict mask mandates

These figures appear to smash the push now on in Australia for a return to mask mandates, which are currently compulsory only on public transport and in aged care and healthcare centres.

Meghan Markle is all smiles as she is spotted with Gloria Steinem at Soho’s swanky Crosby Hotel for lunch – two weeks after both appeared in Vogue to blast Roe v Wade decision: Duchess described Prince Harry’s reaction to the news as ‘guttural’, and other top stories from July 19, 2022.

Since Australian mandates began to ease last October, per capita case numbers in Singapore exceeded, matched or lagged behind Australia, before rising ahead again.

In New Zealand, case numbers were six weeks behind Australia’s Omicron wave in January, but since February they have matched or exceeded Australia.

Death rates in New Zealand also overtook Australia per capita at the start of March, despite the Kiwis being on the highest code red mask mandate restrictions – and have stayed higher ever since. 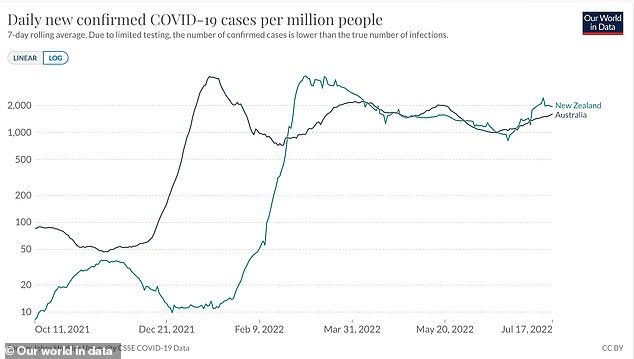 In New Zealand, case numbers were six weeks behind the peak of Australia’s Omicron wave in January but since late February they have matched or exceeded its Tasman neighbour 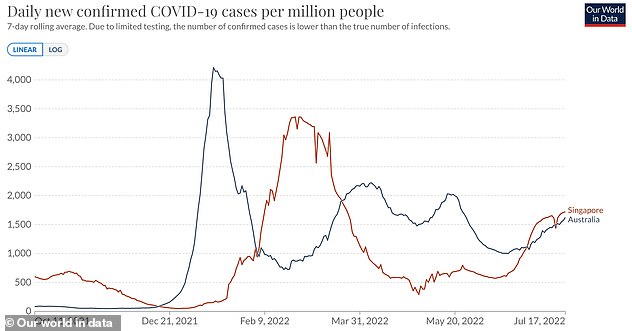 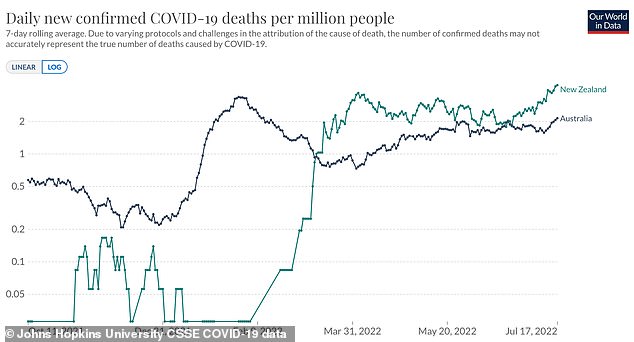 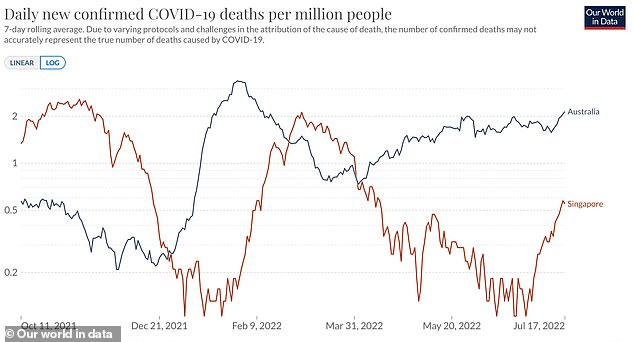 In Singapore, death rates in the city dropped lower in April after racing ahead between October and Christmas, but are now surging wildly again and set to overtake Australia once more

New Zealanders are told to wear a mask whenever they leave home. The country has a traffic light system of restrictions and was on code red until April when it moved to code orange.

Under code red, Kiwis had to wear masks at universities and colleges and  in schools from Year 4 up, and when visiting early learning centres.

All indoors events and indoor gatherings needed to be masked up,

But masks don’t need to be worn outdoors or while exercising.

Since April, masks are not now needed in schools, indoor events, museums and libraries or at hospitality venues, but must still be worn everywhere else.

The country is tipped to return to code red on Thursday as NZ case numbers surge.

In Singapore, death rates dropped below Australia in April after racing ahead between October and Christmas, but are now surging wildly and are set to overtake Australia once more.

The Singapore findings were shared on Twitter by Australian National University infectious diseases professor Peter Collignon as debate rages on the need for masks.

The post, originally made by a Singapore resident, added: ‘Singapore has never dropped its mask mandates. Masks are required indoors at all times.

‘Australians aren’t wearing masks much at all. Let’s compare the data.’

Next to a graph of the statistics, he added: ‘It doesn’t matter.’

The data has been revealed as Victorian children over the age of eight are now asked to wear a mask in classrooms until the end of winter amid a spike in cases.

The state government has insisted the new advice is not a mask mandate, with students encouraged to wear a mask indoors and on public transport.

Parents have described the new rules as a ‘mandate by stealth’ but former Labor Leader Bill Shorten said kids should be encouraged to wear masks where possible.

‘We’ve had 300 days of home-schooling, and the schools closed,’ he told Karl Stefanovic during an appearance on the Today Show on Tuesday morning.

‘To me it’s a no-brainer, do you want your child sick at home or do you want them running around wearing a mask?’ the father of one said.

NSW and Victorian health ministers have both so far resisted the growing calls for a return to mask mandates, but critics say the looming state elections in October and November are the main reason behind any delay in bringing them back. 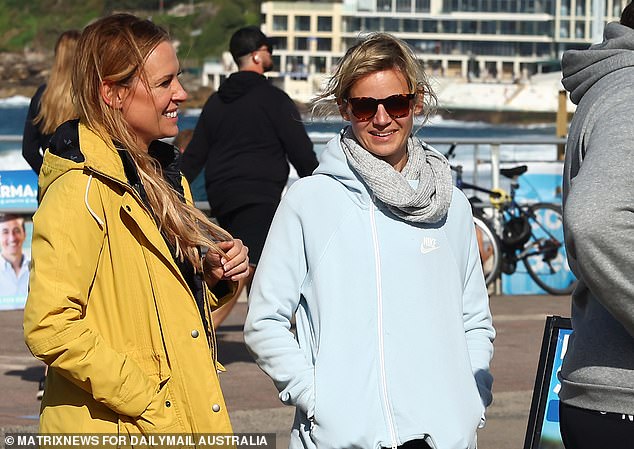 The new data shatters the case for mask mandates to return to Australia, pictured, where they are now only compulsory on public transport and in aged care, medical and remand centres

The new figures come as it was revealed the median age of those dying from Covid in Australia is now 83 years old, the same age as the nation’s average life expectancy.

The data comes as St Vincent’s Hospital in Sydney said they have just ‘one or two’ patients in ICU – with top doctors confirming the winter wave is far less severe than those to have previously hit Australia.

‘We certainly don’t have many,’ confirmed a hospital spokesman on Monday.

‘It’s not presenting so much on the very acute side, where patients need ventilation.’

The vast majority of those who have caught Covid are under 50, with 3,121,953 cases so far. Just 293 people under 50 have died of the virus since the pandemic began.

The statistics show that since Australia’s mass vaccination rollout began, those under 50 face a less than one in 10,000 chance of dying from Covid.

‘The median age of all those infected is 31 … [but] the median age of those who died is 83,’ the latest federal health department ‘Coronavirus At A Glance’ report states. 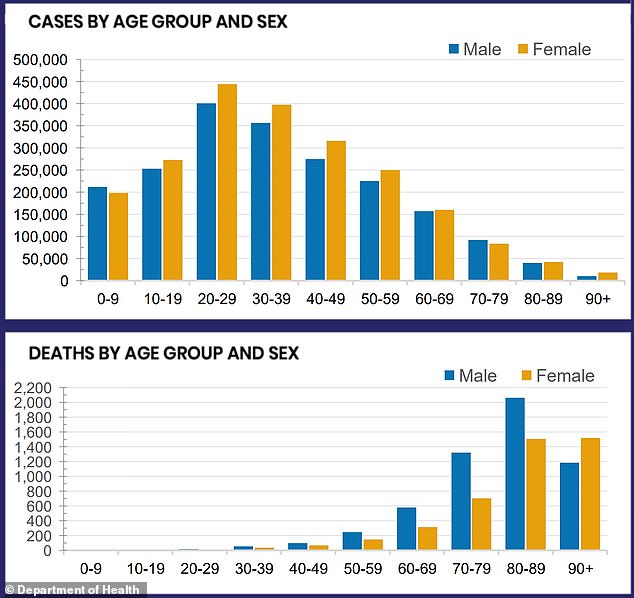 The vast majority of those who have caught Covid are under 50, with 3,121,953 cases so far but just 293 of that age have died of the virus since the pandemic began. Most killed by Covid were men over 70 and women over 80, accounting for 7,585 deaths out of the nation’s total virus death toll of 10,582, up to 3pm last Friday

And even if Covid breaks out among elderly frail residents in aged care centres, more than 95 per cent of those infected will survive.

NSW Premier Dom Perrottet admitted on Monday that the current flu wave was now a bigger threat than Covid.

‘As we move through the next phase of the pandemic, we need to balance up the competing health issues.’

The median age to die from Covid is 83

The average life expectancy in Australia is 82.9

More than 60,770 aged care residents out of the 63,875 infected have recovered from Covid

The official figures come as pressure grows for a return to compulsory masks ahead of a feared new outbreak of the virulent new Omicron subvariants BA.4 and BA.5.

Doomsday modelling by the Burnet Institute for the NSW government last year said the state’s health system could cope with up to 947 Covid patients in ICU.

But NSW currently has just 64 Covid cases in ICU across the state with only 13 on ventilators, according to NSW Health.

The stats have also destroyed claims that Omicron is super-infectious, with infection rates staying constant all year long.

Australia’s Omicron BA.1 and BA.2 outbreak, which started in January, coincided with the end of most mask mandates and lockdown restrictions.

Omicron BA.2’s R0 – the number of people one person can infect without restrictions – is said to be around 13.3.

But the Re – the effective rate of infection – has stayed around 1 or less since the middle of January, after a brief spike to 2.0 for a couple of days after New Year.

The government’s mass double-jab vaccination program, taken up by 95 per cent of the population, has played a huge part in controlling the spread of the virus.

But the subsequent third booster shot program has been less successful , with just a 71 per cent take up, as work now starts on encouraging a fourth jab. 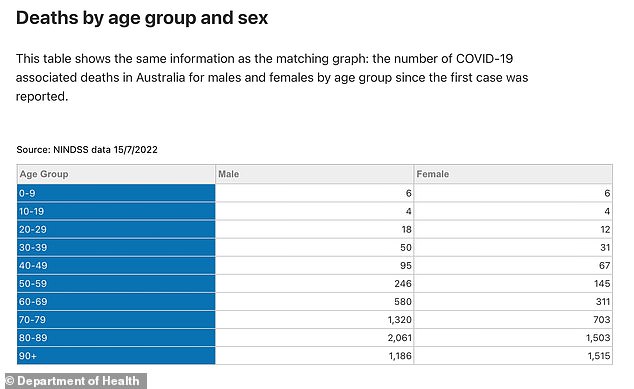 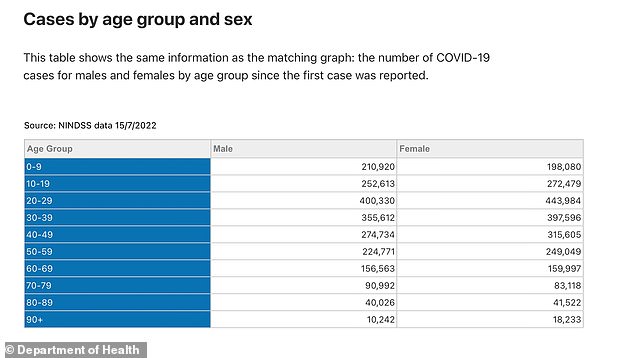 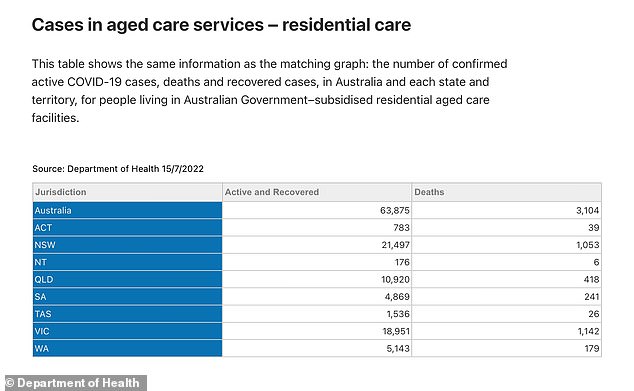 Australia is doubling down on mandatory isolation as other countries around the globe move towards abandoning them altogether – and it’s costing taxpayers $800million.

Prime Minister Anthony Albanese came under fire last week for back-flipping on a decision to scrap $750-a-week payments for casual workers and people without sick leave benefits who are forced into isolation for seven days.

He was pressured to bring back the payments after refusing to budge on mandatory isolation, and encouraged people to wear face masks.

However, the UK, Spain, Denmark, Sweden, Norway, Estonia, Lithuania and Switzerland no longer have isolation, while positive cases are only ‘recommended’ to self-quarantine for five days in the United States.

Countries such as Sweden no longer categorise Covid as a ‘critical illness’.

Mr Albanese argued the isolation period was necessary to combat surging Covid cases and ease pressure on hospitals, despite a large portion of the strain coming from influenza cases.

In the 24 hours to Friday morning, 43,491 new cases of Covid were reported across Australia. There were 65,770 confirmed cases of the flu within the same period.

There is no mandatory isolation period for influenza, and no payments for casual workers off sick with the flu.

‘Anyone advocating for mandates needs to move on from that because unless significant things change with … the way this virus behaves, we’re not going to be bringing in restrictions or mandates,’ he told Sky News.

Mr Albanese had earlier said the $750-a-week pandemic leave disaster payment would not be reinstated past June 30.

However, he announced on Saturday that it would be made available again from Wednesday and would extend to September 30.

Queensland Premier Annastacia Palaszczuk has urged students and children to mask up in schools, while NSW education minister Sarah Mitchell also flagged the return of masks in class.

NSW schools have suffered a 30 per cent rise in staff shortages through sickness as a result of Covid and flu this year, Ms Mitchell said.

‘We are absolutely feeling the pressure…there’s no question of that,’ she admitted. 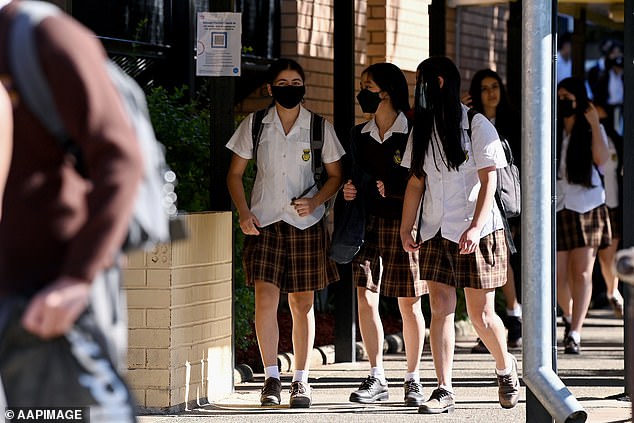 Queensland Premier Annastacia Palaszczuk has urged students and children to mask up in schools, while NSW education minister Sarah Mitchell also flagged the return of masks in class

‘I made a decision based on the advice that I had received that further mandating masks was not the most effective way to get the message out about the importance of mask wearing,’ she said.

South Australia would need to declare another state emergency, after allowing the last announcement to expire, before they could issue any new mask mandate.

Federal health minister Mark Butler also says it is ‘unlikely’ the government will enforce compulsory masks, but urged people to wear them in public and to work from home where possible.

‘When you put a mask on, it’s a reminder that things aren’t quite normal. It reinforces behaviours like taking a step back from other people,’ she told Seven West media.

‘The mask could be the thing that also helps us stay mindful of those other things … and stay that bit safer.’

Northern Territory has had the least number of cases and deaths with 53 deaths from 83,684 infections, ahead of even ACT which has had 84 deaths from 175,923 cases.

The nation has also just passed the 75million milestone for the number of Covid test results since the pandemic began, almost three each for every single person.