Ten good reasons not to worry about polar bears

Benny Peiser over at theGlobal Warming Policy Foundation has just posted an essay by well-known author Matt Ridley, entitled “We should be listening to Susan Crockford” which is included as a foreword to a pdf of this very post (“Ten good reasons not to worry about polar bears”), suitable for sharing. I encourage you to have a look.

[Update September 28, 2013: See also this follow-up post “Polar bears have not been harmed by sea ice declines in summer — the evidence.”]

This year marks the 40th anniversary of the signing of an international agreement to protect polar bears from commercial and unregulated sport hunting. The devastating decades of uncontrolled slaughter across the Arctic, including the Bering Sea, finally came to an end. And so in honor of International Polar Bear Day(Wed. February 27) – and because some activists are calling 2013 The Year of the Polar Bear – I’ve made a summary of reasons not to worry about polar bears, with links to supporting data. I hope you find it a useful resource for tuning out the cries of doom and gloom about the future of polar bears and celebrating their current success.

1) Polar bears are a conservation success story. Their numbers have rebounded remarkably since 1973 and we can say for sure that there are more polar bears now than there were 40 years ago. Although we cannot state the precise amount that populations have increased (which is true for many species – counts are usually undertaken only after a major decline is noticeable), polar bears join a long list of othermarine mammals whose populations rebounded spectacularly after unregulated hunting stopped: sea otters, all eight species of fur seals, walrus, both species of elephant seal, and whales of all kinds (including grey, right, bowhead, humpback, sei, fin, blue and sperm whales). Once surveys have been completed for the four subpopulations  of polar bears whose numbers are currently listed as zero (how about funding that, WWF?), the total world population will almost certainly rise to well above the current official estimate of 20,000-25,000 (perhaps to 27,000-32,000?). In the early 70’s numbers were around 5000.

2) The only polar bear subpopulation that has had a statistically significant decline in recent years is the one in Western Hudson Bay (WH)(Fig. 1). A few others have been presumed to be decreasing, based on suspicions of over-harvesting, assumed repercussions of reduced sea ice and/or statistically insignificant declines in body condition (see 3, below) – not actual population declines. 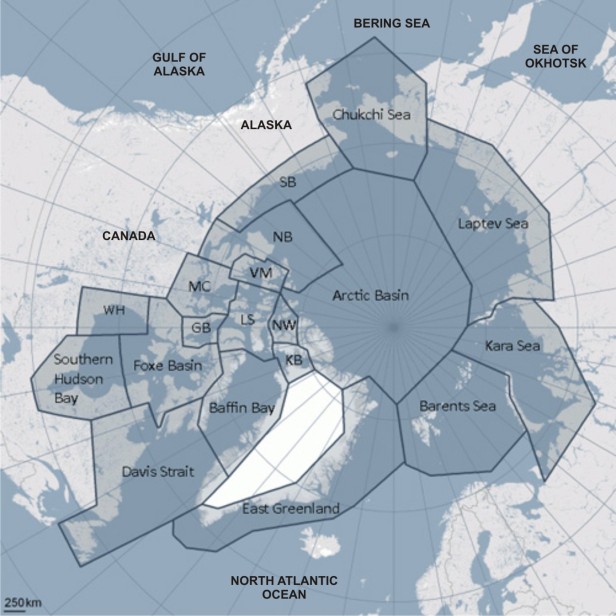 Figure 1. A map of the 19 polar bear subpopulations (courtesy the Polar Bear Specialist Group (PBSG), with a few additional labels).

3) Polar bears in the US portion of the Chukchi Sea are in good condition and reproducing well, while sea ice in the Bering Sea has rebounded from record lows over the last ten years – good reasons not to be worried about polar bears in the Chukchi. The Chukchi subpopulation (which includes bears in the Bering Sea) was formerly assumed to be decreasing due to suspected over-harvesting and past declines in sea ice – even though no population survey had ever been done (see 2, above) – but preliminary reports about a recent survey suggest that Chukchi polar bears are doing very well. While there is still no official population estimate for the Chukchi (currently listed as zero), sea ice coverage in the Bering Sea has been higher than average over the last ten years and 2012 didn’t just break the satellite-era record set in 1999, it exceeded it by almost 100,000 square kilometers.

4) A survey by the Nunavut government in 2011 showed that polar bear numbers in Western Hudson Bay have not declined since 2004 as predicted and all available evidence indicates that Hudson Bay sea ice is not on a steadily precipitous decline – good reasons not to be worried about Hudson Bay bears. While polar bear biologists Ian Stirling and Andrew Derocher continue to insist that the modest decline in numbers of Western Hudson Bay polar bears recorded between 1998 and 2004 was due to earlier breakup of sea ice – and continues on that trend to this day – it turns out that much of the data used to support that claim is either unpublished, woefully out of date, or both. Although Stirling and colleagues have not yet published comparable dates of sea ice breakup since 2007 (they use a particular computation of satellite data), Canadian Ice Service data suggests that over the last 10 years we have not seen another very early breakup in Hudson Bay like the one that occurred in 2003. Surprisingly, 2009 was a late breakup year: the Port of Churchill experienced the latest breakup of sea ice since 1974 (three weeks later than average). All of which suggests that in Western Hudson Bay, some years have been good for polar bears and others have been not so good, but there has not been a relentless decline in sea ice breakup dates over the last thirty years.

5) Population decreases in polar bear numbers attributed to earlier sea ice breakup in Western Hudson Bay (see 4, above) have not been anywhere near as severe as the catastrophic decline that took place in 1974 in the eastern Beaufort Sea, which was associated with exceptionally thick sea ice. The modest decline in the Western Hudson Bay population that took place between 1998 and 2004 (down 22%) pales in comparison to the 1974 Beaufort event, when ringed seals numbers (i.e. polar bear food) dropped by 80% or more and numbers of polar bears plummeted. Similar events took place in 1984 and 1992, which means that three precipitous population declines due to heavy ice have taken place in this polar bear population over the last 40 years – but each time, numbers rebounded a few years later. In other words, due to entirely natural causes, polar bear numbers can fluctuate quite dramatically over relatively short periods because of the highly variable sea ice habitat they live in.

6) Polar bears need spring and early summer ice (March through June) for gorging on young, fat seals and documented declines in sea ice have rarely impinged on that critical feeding period (except for a few isolated years in Hudson Bay, see 4, above). A new studysuggests that while some Western Hudson Bay bears will likely perish if the ice-free period extends to six months (from its current four-to-four+),many will survive because of their exceptional fat storage abilities.

7) There is no plausible evidence that regulated subsistence hunting is causing polar bear numbers to decline, despitesuspicions harbored by the Polar Bear Specialist Group.

8) Global temperatures have not risen in a statistically-significant way in the last 16 years (see Fig. 2) – a standstill not predicted by climate models and a phenomenon even the chairman of the IPCC has acknowledged – which suggests that the record sea ice lows of the last few years are probably not primarily due to CO2-caused increases in global temperatures. Such changes in Arctic sea ice appear to be normal habitat variations that polar bears have survived before (see 9, below) and are likely due to a combination of natural and man-made processes we do not yet fully understand (including the effects of black carbon).[see footnote below]

Figure 2. LEFT – There has not been any statistically significant increase in global temperatures over the last 16 years (1997-2013), even though CO2 levels have continued to rise (Graph modified from David Evans, using Hadley UK Met Office data (HadCrut4). RIGHT – Sea ice extent in September (the yearly minimum) has declined quite a bit since 1997 – although nowhere near zero – while global temperatures have barely changed overall (Graph from NSIDC) Click to enlarge.

9) Survival of polar bears over a hundred thousand years (at least) of highly variable sea ice coverage indicates that those biologists who portend a doomed future for the polar bear have grossly underestimated its ability to survive vastly different conditions than those that existed in the late 1970s when Ian Stirling began his polar bear research. Sea ice has varied – countless dozens of times – over the short term (decades-long climate oscillations) and the long term (glacial-to-interglacial cycles of thousands of years). Over the last 100,000 years, there have been periods of much less ice than today, but also much, much more. Polar bear population numbers probably fluctuated up and down in conjunction with some of these sea ice changes but the polar bear as a species survived – and so did all ofthe Arctic seal species it depends on for food. Such survival indicates that these Arctic species, in an evolutionary sense, are very well-adapted to their highly-variable habitat.

10) Polar bears today are well distributed throughout their available territory, which is a recognized characteristic of a healthy species.

These are all good reasons to feel good about the current status of the polar bear. It is plain to see that these ice-dwelling bears are not currently threatened with extinction due to declining sea ice, despite the hue and cry from activist scientists and environmental organizations. Indeed, because the polar bear is doing so well, those who would like to see polar bears listed as “threatened” depend entirely upondramatic declines in sea ice prophesied to occur decades from now to make their case.

Footnote: Updated Feb. 28, 2013. I have amended the last sentence of #8 to reflect the possibility that man-made influences (such as soot) may have contributed to recent sea ice declines.