Hurricane Irma is continuing to tear a deadly path through the Caribbean, causing widespread destruction and reducing buildings to rubble, on a track that could lead to a catastrophic strike on Florida.

The American state is bracing for the arrival of the Atlantic’s most deadly storm in history, which has already left at least 9 people – and as many as 13 – dead, with thousands homeless.

Emergency chiefs warn it will have a “truly devastating” impact on the US.

The Lesser Antilles islands of Barbuda, Saint Barthelemy, Anguilla, and Saint Martin/Sint Maarten were all hit early Wednesday morning by the battering ram of Hurricane Irma.

Irma then carried its march of destruction into the British Virgin Islands on Wednesday afternoon, still packing top winds of 185 mph. As of 5 pm EDT Wednesday, Irma had spent a remarkable 1.5 days as a Category 5 hurricane, which is the 7th longest stretch on record in the Atlantic, according to Dr. Phil Klotzbach.

Florida governor urges people in Irma’s path to get out: ‘We can’t save you’

Longer-range outlook for Irma:  Cuba, The Bahamas, and Southeast U.S.

The 12Z Wednesday runs of our top four track models—the European, GFS, HWRF, and UKMET models—were in strikingly close agreement that Irma will continue on a west-northwest track till Saturday, then arc sharply to the north-northwest. All four model runs placed the center of Irma within roughly 50 miles of Miami on Sunday morning; the latest 18Z GFS was also there. The average track error in a 4-day forecast is 175 miles, but this remarkable agreement among the models lends additional confidence to the NHC forecast track, which brings Irma over or very near southeast Florida on Sunday. All four models move Irma northward along or near Florida’s east coast, with landfall in Georgia or South Carolina on Monday. 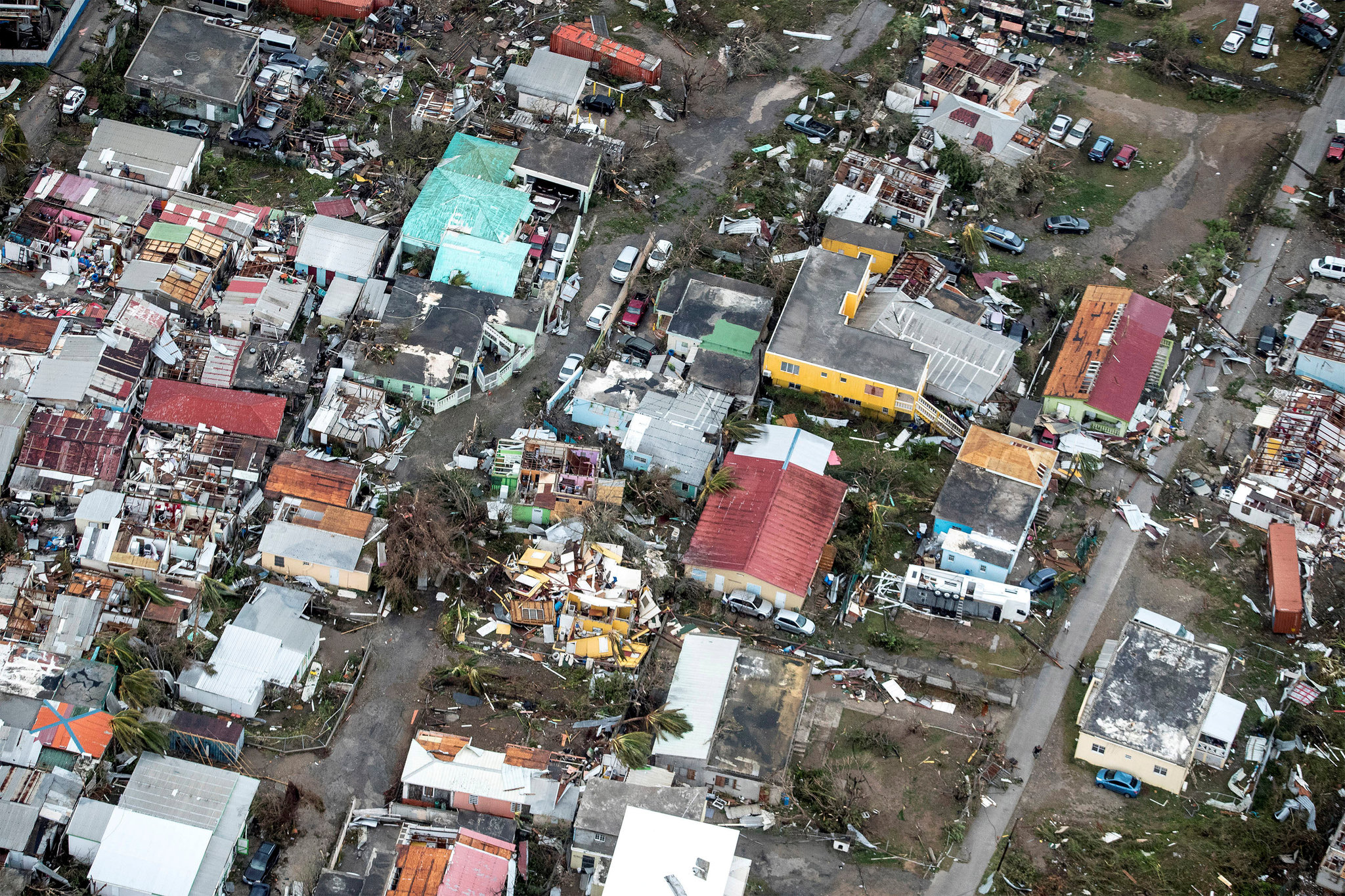 Damage caused by Hurricane Irma on St. Martin, an island in the Caribbean, on Wednesday. Credit Gerben Van Es/Dutch Department of Defense. “

Bahamas:  From late Thursday into Friday, Irma will be moving through or just south of the Southeast Bahamas, which are under a Hurricane Warning along with the Central Bahamas. Irma has the potential to be a devastating storm for The Bahamas, especially its southern islands, and residents should rush any needed preparations to completion.

Cuba:  From Friday into Saturday, Irma will be paralleling the north coast of Cuba, and it is possible Irma’s center will move just inland along the coast for some period of time. Parts of central Cuba are within the “cone of uncertainty” in the official NHC forecast. Residents of Cuba will need to pay very close attention to Irma’s track. The eastern two-thirds of Cuba was under a Hurricane Watch as of Wednesday afternoon. Irma is not expected to cross Cuba and move into the Caribbean.

Florida:  Where and when Irma makes its right-hand turn will largely determine its track with respect to the Florida peninsula. Based on recent ensemble models (in which a large number of parallel runs are carried out to simulate uncertainty in the atmosphere), it is still possible that Irma could take a south-to-north inland track across the Florida peninsula, or a track that stays just east of Florida’s East Coast. However, it appears most likely that Irma will hug the state’s East Coast from south to north, potentially moving inland over some sections. This type of track is far different from those of Hurricane Andrew (1992) and Katrina (2005), which moved from east to west across the Miami metro area. A south-to-north track would affect a much larger part of this elongated metroplex. In an interview published in Capital Weather Gang in August, Bryan Norcross touches on the many issues that a hurricane like Irma could bring to South Florida, which has not experienced a storm this strong in 25 years.

Depending on Irma’s track, hurricane conditions could extend well inland, as well as northward along the length of the peninsula. The entire Florida peninsula is within the five-day cone of uncertainty in the official NHC forecast, and all residents of these areas should pay close attention to the progress of Irma, especially along Florida’s East Coast.

Irma’s intensity will likely undergo fluctuations over the next couple of days, but intensity models show only gradual weakening, and NHC maintains Irma as a Cat 5 storm through Friday. Wind shear is predicted to remain low to moderate along Irma’s path until Saturday, and Irma will be passing over waters that are as warm or slightly warmer than its current environment (see discussion in our Tuesday PM post). Land interaction with Cuba could weaken Irma somewhat, but we must assume that Irma will be at least a Category 4 as it nears South Florida on Sunday, as predicted by NHC.

Georgia/South Carolina/North Carolina:  The GFS, European, and UKMET models from 12Z Wednesday track Irma from just off the northeast Florida coast inland near the Georgia/South Carolina border on Monday. The official NHC forecast places Irma near the Georgia coast on Monday afternoon at Category 3 strength. Even if Irma’s winds weaken and its Saffir-Simpson category drops, Irma could still be capable of extreme storm surge, depending on its track and the geography of its landfall location(s). Storm surge expert Dr. Hal Needham noted in a blog post Wednesday: “The region from northeast Florida (St. Augustine) through all of the Georgia coast and southwest South Carolina is particularly vulnerable to storm surge, whether or not Irma makes a direct landfall in that region.”

Irma is a medium-large hurricane, and is expected to grow in size as it progresses west-northwest over the next four days. As of 5 pm EDT Wednesday, the diameter of hurricane-force winds surrounding Irma was up to 105 miles wide, and the diameter of tropical storm-force winds was up to 310 miles. The official NHC forecast predicted that these diameters would grow to 115 miles and 345 miles, respectively, by Friday, when Irma will be pounding the central Bahamas. This increase in size will be due to eyewall replacement cycles, which spread out the wind field over a larger area, and due to the fact that storms moving towards the pole get more spin from the Earth’s spin.

Irma’s large wind field is putting in motion a vast amount of water, which is spiraling into the center of Irma and creating a large mound. In the open ocean, that water is forced downward, pushing deeper water outward, and the sea surface is not elevated more than a few feet. However, once the hurricane drives that mound of water into a shallow area near land, the water cannot flow downwards, and instead piles up and is forced on land, creating a storm surge. In the Turks and Caicos Island and in the southeastern and central Bahamas, a highly destructive storm surge of 15 – 20 feet above ground is expected near the coast to the right of where the eyewall hits.

If Irma makes a trek up the East Coast from Miami to southern South Carolina as a Category 3 or 4 hurricane, as the models currently suggest, the portions of the coast that the eyewall touches will potentially see a massive and catastrophic storm surge, breaking all-time storm surge records and causing many billions of dollars in damage. Even areas up to a hundred miles to the north of where the center makes landfall could potentially see record storm surges. The area of most concern is the northern coast of Florida, the coast of Georgia, and the southern coast of South Carolina, due to the concave shape of the coast, which will act to funnel and concentrate the storm surge to ridiculous heights. If we look at wunderground’s storm surge maps for the U.S. East Coast, we see that in a worst-case Category 3 hurricane hitting at high tide, the storm tide (the combined effect of the storm surge and the tide) ranges from 17 – 20’ above ground along the northern coast of Florida, and 18 – 23 feet above ground along the Georgia coast. If Irma is a Cat 4, these numbers increase to 22 – 28 feet for the coast of Georgia. This is a Katrina-level storm surge, the kind that causes incredible destruction and mass casualties among those foolish enough to refuse to evacuate.