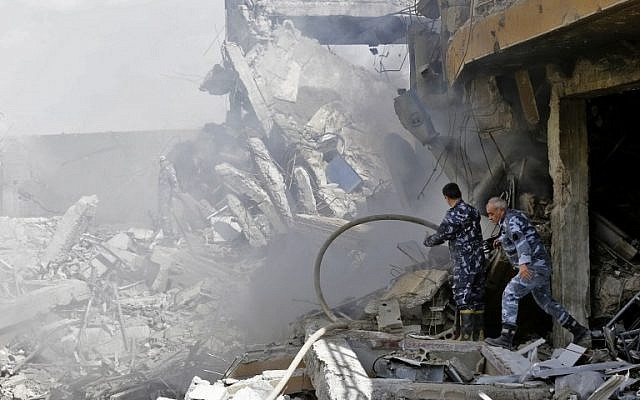 Syrian soldiers inspect the wreckage of a building described as part of the Scientific Studies and Research Center (SSRC) compound in the Barzeh district, north of Damascus, during a press tour organised by the Syrian information ministry, on April 14, 2018. (AFP / LOUAI BESHARA)

A large-scale explosion was reported late Saturday at an Iranian weapons depot in Syria, according to Arabic-language media.

The depot, said to be one of the biggest in the country, is located in Mount Azzan near Aleppo and was reportedly being used by Iran’s Lebanese proxy Hezbollah and other Iranian militias in Syria.

Sky News reported that the explosion was likely caused by an aerial strike launched by an unidentified jet, and further said the area had previously been evacuated for fear of an American attack.

But the Lebanese news service al-Mayadeen, said to have close ties to Hezbollah, reported that the Lebanese terror group denied any military strike took place and said there were some controlled explosions near the site earlier in the day.

Reports of the explosion came less than 24 hours after the US, Britain, and France launched a series of airstrikes on a number of military targets belonging to the Assad regime during a joint operation overnight Friday-Saturday.

The facilities hit had reportedly been evacuated in recent days.

The airstrikes came in response to a suspected chemical weapons attack in the rebel-held town of Douma on April 7, which is said to have killed some 40 people, including children

Syrian state media reported only three people injured in the US-led airstrikes, while Russia’s defense ministry said there were “no victims” among Syrian civilians and military personnel.

On Saturday, the UN Security Council rejected a resolution put forward by Russia condemning the strikes by the US, Britain, and France.

The three countries defended the action at an emergency council meeting Saturday, with the US vowing to take further action should the Assad regime launch another attack using weapons of mass destruction.

US President Donald Trump announced the joint action against Assad’s regime from the White House late Friday. He said the strikes were a direct response to the attack on Douma.

“The evil and the despicable attack left mothers and fathers, infants and children thrashing in pain and gasping for air. These are not the actions of a man. They are crimes of a monster instead,” Trump said.

In a statement issued by the Prime Minister’s Office on Saturday, Netanyahu said, “A year ago, I made clear that Israel fully supports the decision by [US] President [Donald] Trump to stand against the use and spread of chemical weapons,” referring to American strikes against the Syrian regime in April 2017 after a sarin gas attack on a rebel-held town.

“This morning, under American leadership, the United States, France, and the United Kingdom demonstrated that their commitment to the fight against chemical weapons is not limited to declarations,” he went on.

Netanyahu said that it should be “clear to President Assad that “his reckless efforts to acquire and use weapons of mass destruction, his wanton disregard for international law and his provision of a forward base for Iran and its proxies endanger Syria.”