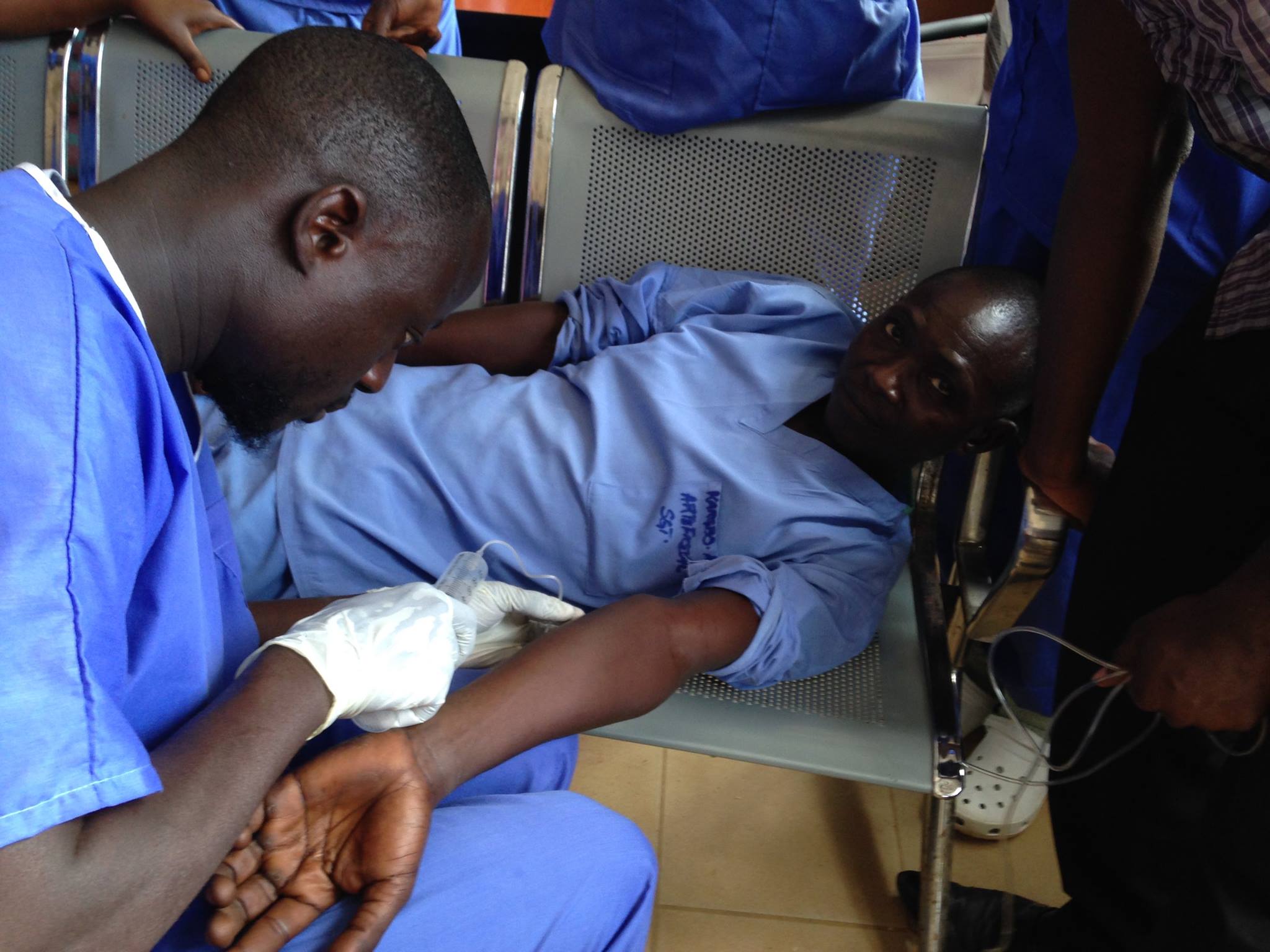 Treating and healing Ebola victims with ozone therapy before the Sierra Leone government was pressured to shut it down. Image source Dr. Robert Rowen Facebook Page.

Médecins Sans Frontières (MSF- Doctors without Borders in English) is an international, independent, medical humanitarian organisation that delivers emergency aid to people affected by armed conflict, epidemics, natural disasters and exclusion from healthcare. It was founded in Paris, France in 1971, and is a non-profit, self-governed organization. (Source.)

MSF is often the first on the scene in natural disasters or situations where refugees are fleeing from armed conflict.

As medical doctors, and due to International governing bodies such as UNHCR or UNICEF which are also usually present in global disasters, they are often restricted to approved pharmaceutical products in their treatments.

Just recently, April 2018, another non-profit humanitarian international NGO was formed called Ozone Without Borders (OWB). This newly formed NGO has ozone and other oxygen therapies as its cornerstone for educating about and applying non-pharmaceutical treatments without discrimination from medical monopoly agents.

The meeting convened to establish OWB was held in the Xavier School of Medicine in Aruba, a semi-independent South Caribbean island 19 miles long and 15 miles north of Venezuela. Co-founder, Dr. Robert Rowen, an ozone therapy specialist, is no stranger to health freedom activism. He’s also very involved with The Foundation for Alternative and Integrative Medicine (FAIM).

Dr. Rowen is even sometimes referred to as the “father of medical freedom” for his success with pioneering statutory protection for MDs practicing alternative medicine in Alaska in 1990 and later in California. Dr. Rowen expressed his disdain for the pharma-medical monopoly’s suppression of non-pharmaceutical natural healing protocols after the meeting in Aruba.

The membership to OWB is not restricted to professional licensed doctors. It’s also open to laypersons who are passionate about health freedom, with very reasonable annual fees. For more information and links to join, see the Ozone Without Borders (OWB) website.

So what was the incident that led to the creation of OWB?

Ebola is a rare, insidious Filoviral infection that causes hemorrhagic fever (EVD) resulting in a cytokine storm, which can rapidly attack and destroy vital organs resulting in death. Unfortunately, mainstream medicine has no solution for reversing Ebola symptoms or its spread. Dr. Rowen knew that delivering ozone therapy in a timely manner would provide that solution.

In October of 2014, Dr. Rowen and his colleague, Dr. Howard Robins, gathered up donated medical ozone producing equipment from Longevity Resources, Inc. of Vancouver B.C. and headed into the internationally highly-publicized epicenter of an Ebola breakout, Sierra Leone, a small nation on the western coast of Africa, at their own risk and cost.

He immediately sought to train some of the local doctors treating Ebola victims. A few had already become infected themselves, and they were the first to be offered ozone therapies that involved a combination of direct intravenous gas administration, rectal gas administration, and ozonized water.

Immediate positive results were observed within 48 hours or less, but the treatments continued for 10 days with high dose oral vitamin C and glutathione precursor supplements for good measure. Three victims were confirmed to have recovered completely, and an infected fourth who was asymptomatic did not succumb to the disease.

Despite these early successes, the Sierra Leone Minister of Health decreed the Rowen/Robins project be halted, condemning some of the doctors. Apparently, inexpensive and effective ozone therapy which cannot be patented was a threat to Big Pharma and their desire to develop Ebola drugs and vaccines.

Dr. Rowen addressed this incident on his Facebook Page, explaining why it is accurate to label these actions in Africa as “crimes against humanity”:

I want to take you back to the Ebola epidemic of West Africa. It was fall of 2014 when I recruited Dr. Howard Robins to join me on a medical mission to Sierra Leone to try to save lives with ozone therapy.

People were dying like flies. Fear was everywhere. Robins and I and our team had jumped through hurdles to get to the point of training doctors at the state run Ebola treatment center, and treating Ebola victims.

Finally I got to the Ebola center and, while in the middle of training their staff, a call came in from the assistant Minister of Health shutting down the effort. A few minutes later, the Minister himself called confirming the action.

I felt like I was just mugged or kicked in the gonads. I lost it. I screamed to the health people assembled and lined up to get ozone that some there would die, and that the order was a crime against humanity.

In fact, a doctor I personally trained became infected with Ebola. He begged for and was denied ozone therapy by his own government and died a horrible (and I mean HORRIFIC) death. I detailed it in past posts.

Two other infected victims did not get tested knowing if they showed positive, the military would have forcibly thrown them in the containment unit and deny them ozone, guaranteeing them a 40% survival chance.

I knew full well how and why the order came down, but had no evidence, until now. I was just fearful of my own safety and wanted out as quickly as possible. Just recently, I got to talk with my own (from Africa) “Deep Throat” about what really came down, who confirmed what my Higher Self told me at the time.

Pharma was wise to our efforts to cure Ebola with ozone therapy. (Remember, Pharma had nothing but VERY expensive Zmapp, which was a crap shoot. Pharma was also working on a vaccine).

Our treatment cost about $5 per person (actually about half that), and was not patentable. Pharma wanted to see our project get the Deep 6.

If we publicly cured the most dread(ed) disease the world ever knew with a non-patentable therapy costing less than $5 per patient, the course of pharmaceutical medicine across the board would have been forever altered.

The entire world was watching the crisis.

Remember that millions were pouring into West Africa to burn and bury bodies of Ebola victims. There was no reasonable treatment for one infected. The mortality was about 60% in the best of circumstances.

Pharma went to the WHO (World Health Organization), which was deeply involved in the body burning and public education efforts. Pharma used the WHO as its lackey.

The WHO went to high government officials and, for lack of a better word, extorted the country.

My “Deep Throat” confided, “The ministers were told that they would either shut down your ozone program or not only would Pharma pull out of Sierra Leone, but out of Africa entirely. Big Pharma suggested to the WHO that it was not just Africa that would be affected, but all the WHO efforts around the world. Who wants that responsibility on their shoulders?”

The officials were placed between a rock and a hard place. They were in a lose-lose proposition.

If we were permitted to continue, and Pharma abandoned them, and our efforts failed, they would be left with a totally empty bag. At least if they fell prey to Pharma’s malevolence, they would have Pharma to fall back on, for whatever that might have been worth.

They chose the less risky path and scuttled our work. As a result, several more of their physicians died horribly and hundreds more people, perhaps thousands, died absent any semblance of a reasonable treatment. (Source.)

Only a handful of alternative health media outlets spoke of the Rowen/Robins projects’ curtailed success. So they kept their patients’ files and created a clinical report that was published in the journal African Journal of Infectious Disease online (AJOL) early in 2016 titled Rapid resolution of hemorrhagic fever (Ebola) in Sierra Leone with ozone therapy. This unpublicized report concluded:

Ebola virus may have a very narrow window of redox infectivity capacity, which can be easily exploited with OT [oxygen therapy]. OT may be a useful modality in EVD [Ebola viral disease] and other viral diseases and should be immediately studied to save lives that might otherwise be lost. (Abstract source)

This was the motivation to gather in Aruba in April 2018 to create Ozone Without Borders (OWB).

Why Ozone Therapy is So Potent for Many Diseases

Dr. Rowen summarizes the mechanics of ozone therapy, which not only rapidly eliminates viruses, but potently assists in recovering damaged tissue.

Ozone, in vitro [lab cultures], instantly oxidizes reduced sulfhydryls to disulfides. While ozone itself lasts only microseconds in blood, the reaction of ozone and blood lipids leads to the production of more stable but still highly reactive oxygen species (such as peroxides), which would react similarly, and perhaps mimic the pro-oxidant mechanism of immune system defense.

Breathing concentrated mechanically-generated ozone directly into the lungs can damage delicate lung tissues. That’s why it is applied as a gas rectally or vaginally, injected into the bloodstream intravenously, or O3 is introduced into blood withdrawn from the patient and immediately reintroduced into the body, similar to the process of dialysis.

Oxygen-Ozone Therapy Suppression is Not New

During the 1960s, now famous nutritional M.D.,  Dr. Robert Atkins, creator of the Atkins Diet, was severely censored by the New York State Medical Board after a former patient of his explained to a New York City intern that her breast cancer was cured from Dr. Atkins therapy of injecting ozone (O3) directly into her tumor.

Curing cancer by any means outside of cut, burn, and poison (surgery, radiation, and chemo) is a major threat to the multi-billion dollar cancer industry, so the intern did his duty to protect this cancer treatment monopoly and reported Atkins to the state medical authorities. Dr. Atkins’ medical license was promptly revoked.

But Atkins had an ace in the hole. He had a weekly radio show that was popular in New York City, and he explained the medical board’s action and why it was done – for curing cancer with an unapproved treatment.

His listeners flooded the state medical board with complaints, forcing a compromise. Dr. Atkins’ license was reinstated with the condition that he would no longer use or promote ozone therapy. The first ozone generator for medical purposes was created in 1896. Up until the 1940s, it was commonly used in America.

Health journalist, Edward McCabe, author of Flood Your Body With Oxygen, considers the fact that ozone therapy first appeared in the United States in 1896, which predates the formation of our FDA, a justification for “grandfathering” ozone therapy approval in the USA.

But the medical authorities are not going along with this valid proposal. (Source)

This is why Dr. Rowen has pioneered legislation in Alaska and California to allow ozone and other natural therapies without attacks from authorities. Other states’ practitioners are following his precedence to lobby their state legislators.

There are some medical practitioners in the U.S. who are trained to use ozone (O3) therapies and use them.  Here’s that list.

There are still ozone generators that are available for DIY use at home – designed to create ozone water that’s consumed orally. You can begin your internet search with the same company that provided Rowen and Robins with their Sierra Leone equipment.

To get familiar with home ozone generators, investigate online further to find what fits your personal and budgetary situation.

The applications of ozone therapy extend beyond infectious diseases and are widely varied. Dr. Rowen has several video testimonials from patients suffering from ailments other than infectious diseases. He shares them on his YouTube channel here: