Even as CNN is out with a new report condemning Iran for denying any responsibility or role in the latest massive exchange of fire between Israel and Syria, The New York Times has admitted (albeit buried deep in the story) that Israel was the actual aggressor and initiator of hostilities which threatened to spiral out of control overnight Wednesday and into Thursday morning.

While CNN and most Israeli and mainstream media sources blame Iran for initiating an attack on Israel, on the very day of the early morning strikes (Thursday), the Times acknowledged, “The barrage [of Syria/Iran missiles] came after an apparent Israeli missile strike against a village in the Syrian Golan Heights late Wednesday.”

This is significant as Israel is seeking to cast Iran as an aggressor on its border which must be dealt with preemptively; however Syria’s response—which involved between 20 and 50 missiles launched in return fire—imposed new rules of engagement on a situation in which Israel previously acted with impunity.

And though multiple international reports have pointed to strikes landing on the Israeli side, Israel has apparently been extremely careful in preventing photographs or video of any potential damage to see the light of day. According to professor of Middle East history Asad AbuKhalil, “Israel censor still hasn’t allowed any reports about casualties or damage.”

Up until recently, Assad had not taken the bait of Israeli provocation for years now in what we previously described as a kind of “waiting game” of survival now, retaliation later. But with the Syrian Army now victorious around the Damascus suburbs and countryside, and with much of Syria’s most populous regions back under government control, it appears that Assad’s belated yet firm response to the Israeli large scale attack has changed the calculus.

Even NYT admits towards end of the article that Israel initiated the exchange of fire:

“The barrage came after an apparent Israeli missile strike against a village in the Syrian Golan Heights late Wednesday.”

So why isn’t this the lead or headline???https://mobile.nytimes.com/2018/05/10/world/middleeast/israel-iran-syria-military.html …

Israel said it had dealt Iran a severe blow in Syria after a failed Iranian rocket barrage against Israeli military posts in the Golan Heights.

Damascus has now signaled to Israel that its acts of aggression will be costly as Syrian leadership has shown a willingness to escalate. But how did this new and increasingly dangerous situation come about, and which side actually has the upper hand?

Below is a dispatch authored and submitted by Elijah Magnier, Middle East based chief international war correspondent for Al Rai Media, who is currently on the ground in the region and has interviewed multiple officials involved in the conflict.

Israel hits Syrian and Iranian objectives and weapons warehouses again (evacuated weeks before) for the fourth time in a month. 28 Israeli jets participated in the biggest attack since 1974. Tel Aviv informed the Russian leadership of its intentions without succeeding in stopping the Syrian leadership from responding. Actually, what is new is the location where Damascus decided to hit back: the occupied Golan Heights (20 rockets were fired at Israeli military positions).

Syria, in coordination with its Iranian allies (without taking into consideration Russian wishes) took a very audacious decision to fire back against Israeli targets in the Golan. This indicates that Damascus and its allies are ready to widen the battle, in response to continual Israeli provocations.

But what is the reason why new Rules of Engagement (ROE) were imposed in Syria recently?

For decades there was a non-declared ROE between Hezbollah and Israel, where both sides were aware of the consequences. Usually, Israel prepares a bank of target objectives with Hezbollah offices, military objectives and warehouses and also specific commanders with key positions within the organization. Israel hits these targets, updated in every war. However, the Israelis react immediately against Hezbollah commanders, who have the task of supporting, instructing and financing Palestinians in Palestine, and above all the Palestinians of 1948 living in Israel. This has happened on many occasions where Hezbollah commanders related to the Palestinian dossier were assassinated in Lebanon.

Last month, Israel discovered that Iran was sending advanced low observable drones dropping electronic and special warfare equipment to Palestinians. The Israeli radars didn’t see these drones going backward and forward with their traditional radars, but were finally able to identify one drone using thermal detection and acoustic deterrence, to down it on its last journey.

In response to this, Israel targeted the Syrian military airport T-4 used by Iran as a base for these drones. But Israel was not satisfied and wanted to take further revenge, hitting several Iranian and Syrian targets during the following weeks.

Tel Aviv believed it could get away with repetitively hitting Iranian objectives without triggering a military response.

Perhaps Israel really believed that Iran was afraid of becoming engaged in a war with Israel, with the US ready to take part in any war against the Islamic Republic from its military bases spread around Syria, in close vicinity to the Iranian forces deployed in Syria. Obviously, Iran has a different view from the Israelis, the Americans and even the Russians, who like to avoid any contact at all cost.

On Wednesday on an intense battle playing out between House Intel Committee Chairman Devin Nunes (D-CA), the… 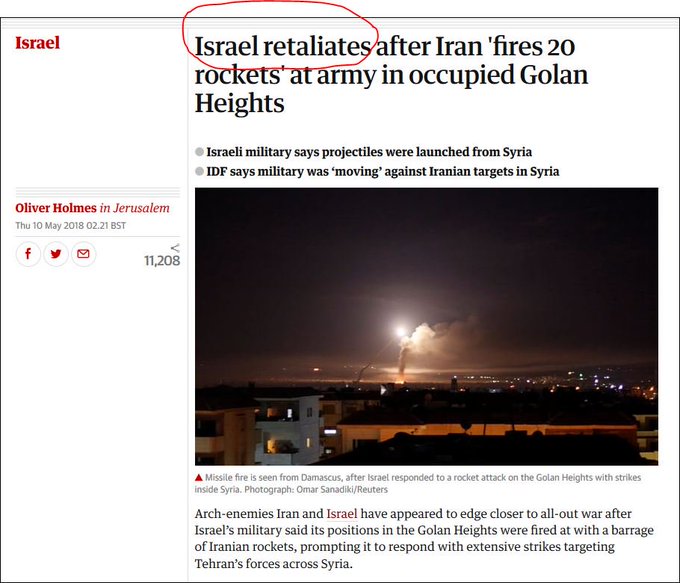 The ridiculous trope that sums up ‘mainstream’ reporting on the Middle East. Israel: so often the victim, rather than the aggressor. Fake news.

Regardless of how many Israeli jets took part in the latest attack against Iranian and Syrian objectives and how many missiles were launched or intercepted, a serious development has occurred: the Syrian high command broke all pre-existing rules and found no obstacle to bombing Israel in the occupied Golan Heights.

Again, the type of missiles or rockets fired by Syria against Israeli military objectives it is not important or whether these fell into an open space or hit their targets. What is important is the fact that a new ROE is now in place in Syria, similar to the one established by Hezbollah over Kiryat Shmona near the Lebanese border, when militants fired anti-aircraft cannons every time Israel violated Lebanese airspace in the 2000.

Basically Israel wanted to hit objectives in Syria but claims not to be looking for confrontation. Israel would have liked to continue provoking Syria and Iran in the Levant, but claims to be unwilling to head towards war or a battle. Israel would like to continue hitting any target it chooses in Syria without suffering retaliation.

But with its latest attack, Israel’s “unintended consequences” or provocation has forced the Syrian government to consider the occupied Golan Heights as the next battlefield.

If Israel continues and hits beyond the border area, Syria will think of sending its missiles or rockets way beyond the Golan Heights to reach Israeli territory. 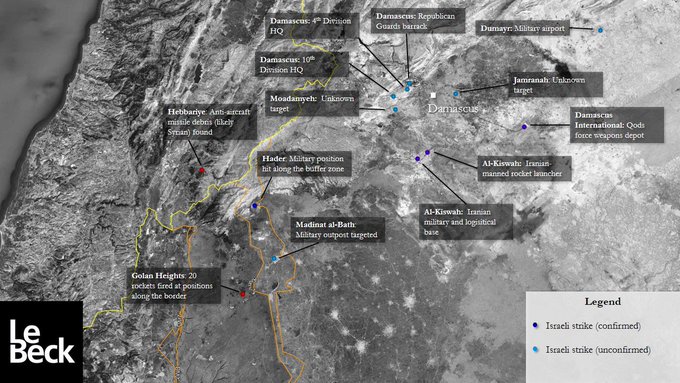 Actually, Hezbollah’s secretary general Sayyed Hasan Nasrallah said a few years back: “Leave Lebanon outside the conflict. Come to Syria where we can settle our differences.” Syria, logically, has become the battlefield for all countries and parties to settle their differences, the platform where the silent war between Israel and Iran and its allies is finding its voice.

In Damascus, sources close to the leadership believe Israel will continue attacking targets. However, Israel knows now where Syria’s response will be.

This is what Israel has triggered but didn’t expect. Now it has become a rule.

The Israeli Iron Dome is inefficient and unable to protect Israel from rockets and missiles launched simultaneously. Now the battle has moved into Syrian territory occupied by Israel to the reluctance of Tel Aviv, and Russia. Iran and Syria are not taking into consideration Russia’s concern to keep the level of tension low if Israel is not controlling itself.

Syria recognizes the importance of Russia and its efficient role in stopping the war in Syria and all the military and political support Moscow is offering.

However, Damascus and Tehran have other considerations, especially the goal of containing Israel. They have trained over 16 local Syrian groups ready to liberate the Golan Heights or to clash with any possible Israeli advance into Syrian territory.

Israel triggered what it has always feared and has managed to get a new battlefield, the Golan heights. It is true that Israel limited itself to bombing weapons warehouses never hit before. It has bombed bases where Iranian advisors are based along with Syrian officers (Russia cleared most positions to avoid the embarrassment of being hit by Israel). It is also true that Israel didn’t regularly bomb Iranian military and transport aircraft carrying weapons to Syria, or the main Iranian center of control and command at Damascus airport. This means that not all parties are pushing for a wider escalation, so far.

Can the situation get out of control? Of course it can,…. the question is when?!?