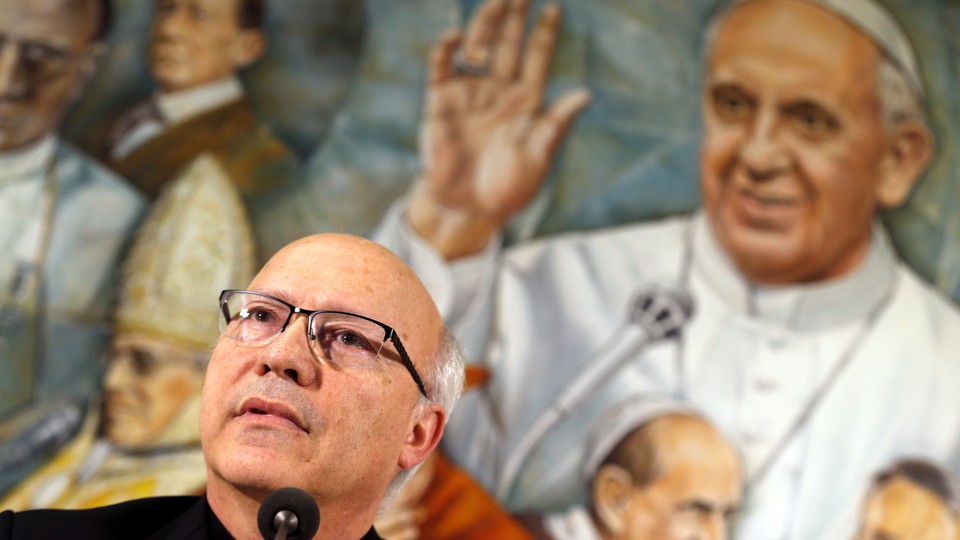 It was announced on May 21, 2018, that the current head of the Roman Catholic Church, Pope Francis, has officially given his blessing to the practice of homosexuality.

Naturalnews reported that, Pope Francis reportedly told a male victim of sexual abuse – and one who was abused at the hands of the Roman Catholic Church in Chile, no less – during a private conversation that homosexuality isn’t a sin, contradicting centuries of church doctrine.

According to Juan Carlos Cruz, the male victim in question, Pope Francis told him reassuringly: “God made you like this and loves you like this” – in direct contradiction to the Holy Scriptures.

“The pope loves you like this. You have to be happy with you who are,” Pope Francis added.

Cruz had apparently been discussing his perceived sexual orientation with Pope Francis in light of having been abused by notorious pedophile priest Fernando Karadima while still a child. And it was perhaps this very abuse that damaged Cruz and altered his sexual preferences as he grew into adulthood.

But rather than address any of this in that context, Pope Francis told Cruz that it doesn’t really matter why he’s gay because God doesn’t really care. Just go with it, was essentially Pope Francis’s advice to the man that has sent shockwaves throughout the Roman Catholic community.

After having already taken a left-wing stance on almost every major social issue, ranging from global warming to gun control to LGBT rights, Pope Francis’s most recent endorsement of homosexuality isn’t really all that surprising to anybody who’s been paying attention. According to the Pope’s new logic, even pedophiles should be excused by the Church because they, too, could claim, “God made me this way.”

Roman Catholicism: The religion of the devil

It is clear as day that there’s almost nothing that Pope Francis has said or done since acquiring his position that in any way aligns with the God he claims to represent. You might even say that this religious figure is certifiably anti-Christ, both in principle and practice.

It’s not unlike the rest of the Roman Catholic Church, in fact, which has been covering up egregious sex crimes like pedophilia for many decades. This was the premise of Pope Francis’s recent meeting with Cruz, after all, which was supposed to be an “apology” for the horrific abuse he endured at the hands of Chilean priests.

Some 34 of them have actually announced their resignation now that the cat’s out of the bag, which The Sun describes as “an unprecedented move in the history of the Catholic Church. This all comes roughly seven years after Fernando Karadima, now 87 years old, was convicted by the Vatican of committing horrific sex crimes against innocent minors during his tenure as a Roman Catholic priest.

With every other unorthodox move that’s been made by Pope Francis, it’s almost a bit shocking that he hasn’t come out to endorse pedophilia as well. This would be a convenient “reinterpretation” for the Roman Catholic Church and its pope to take as cover for its filthy legacy of gross sexual abuse.

If the pope speaks for God, he can simply declare that “God loves pedophiles” and “love is love.”

It’s what’s already being taught to schoolchildren at some schools where teachers are indoctrinating them to believe that “love knows no age.”

This would align perfectly with the current trajectory of the Roman Catholic Church, which for all intents and purposes has unveiled itself as the religion of satanism. What Pope Francis and his minions are teaching is that anything goes, that there is no moral code and that God changes as we change – which is the exact opposite of true Christianity.

The Pope’s Turnaround on Sex Abuse

Francis is trying to fix a series of “grave errors” in Chile, and allegedly affirmed the gay identity of a victim there.

The Vatican is working through an extraordinary series of events related to child sex abuse.

Last month, Pope Francis apologized for “grave errors” in the way the Catholic Church handled sex-abuse cases in Chile, where a bishop, Juan Barros Madrid, was accused of covering up the crimes of another priest, Fernando Karadima.

Following an emergency meeting in Rome with the pope, all 34 Chilean bishops offered their resignation over their handling of the allegations, an apparently unprecedented move.

Then, on Monday, the Spanish newspaper El País reported that Juan Carlos Cruz, a Chilean sex-abuse survivor, had spoken with Pope Francis about his gay identity during a long meeting. “It doesn’t matter that you’re gay. God made you that way and that is the way he wants you to be, and I don’t mind,”

Francis said, according to Cruz. “The pope wants you this way, too, and you have to be happy with who you are.”

The quickly unfolding events suggest an aggressive redirection for Pope Francis, who elevated the Chilean scandal into a full-on crisis in January, when he vigorously defended Barros during a papal visit to Chile and Peru. As the Church continues to wrestle with the aftershocks caused by clergy sex abuse around the world, its efforts to make amends in Chile may be a sign of a new approach ahead—or the extreme difficulty of recovering from years of misconduct and mishandled allegations.

The Chilean Church has been publicly grappling with its sex-abuse scandal for more than a half decade. In 2011, the Vatican announced that it had found Karadima guilty of sexually abusing minors. Subsequent developments suggested that Chilean bishops tried to keep the voices of abuse victims from being heard. Leaked emails showed that two cardinals sought to block Cruz, the Chilean abuse survivor, from serving on Pope Francis’s commission for the protection of minors. Victims accused Barros, who spent more than 30 years working with Karadima, of witnessing and covering up the abuse. Yet in 2015, Francis appointed him bishop of a diocese in southern Chile. When protesters objected to the move, the pope called them “dumb,” saying they had no proof against Barros.
Three years later, the pope continued this inflammatory rhetoric during an official visit to Latin America. “The day someone brings me proof against Bishop Barros, then I will talk,”

Francis said during a stop in Iquique, a city in northern Chile, in January 2018. “But there is not one single piece of evidence. It is all slander. Is that clear?” He later reiterated this view during a conversation with journalists aboard the papal plane: “One who says with insistence, without having the evidence, that you have done something, that is calumny.” Sex-abuse survivors, advocates, and Chilean Catholics were reportedly shocked by the comments.

Just a few months later, Francis has reversed course.
After Vatican investigators put together a 2,300-page report based on 64 interviews about what had happened in Chile, the pope wrote a letter to the country’s bishops confessing “pain and shame” about what had happened there. He said he had made “serious mistakes in the assessment and perception of the situation, especially because of the lack of truthful and balanced information,” according to a translation by the Catholic News Agency. He called on the bishops to meet with him in Rome, and invited the Chilean victims to come and share their stories with him as well. At the conclusion of Francis’s three-day meeting with the bishops, all of them offered to resign, seeking forgiveness for the “grave errors and omissions we committed.” It is not yet clear which, if any, of the resignations Francis will accept.
Most importantly, Francis has made a tonal change. Where he was once defensive and barbed about the situation in Chile, accusing the Church’s critics of being “led by the nose by the leftists who orchestrated all of this,” he has shifted his focus to the pain of the victims and the errors of the Church.

“I am overcome with emotion after spending a week at the pope’s house and talking with him for hours,” said Cruz, the abuse victim, in his interview with El País. “The pope treated us like kings in Santa Marta,” the Vatican guesthouse where Francis lives, “and treated the bishops like children. It is obvious that we’re the ones that he believed.” While the pope’s alleged comments on Cruz’s homosexuality have not been confirmed by the Vatican, they are in keeping with his approach: one that’s fundamentally pastoral and focused on individual cases, rather than strictures and dogma.

For all that Cruz and other Chilean abuse survivors are celebrating Francis’s latest moves, the pontiff still faces tests ahead on handling allegations—including against his top advisers.

Cardinal George Pell, whom Francis brought to Rome from Australia to reform the Vatican’s financial practices, is facing criminal charges of sexual abuse in his home country, where he will soon stand trial.

Several priests from Pell’s hometown of Ballarat, a former mining town, were convicted of abusing children; one, Gerald Ridsdale, was found guilty of sexually abusing 65 children from the 1960s to the 1980s, according to The New York Times. And the island community of Guam is still reeling from a massive set of clergy sex-abuse cases—a total of 168 have been brought in federal and local courts since 2016, according to the Pacific Daily News.

Pope Francis’s efforts to repair the situation in Chile are only just beginning, and these and other cases may yet challenge his papacy.

But Cruz, in his interview with El País, was optimistic. “This is having a tsunami effect,” he said. “We have the Chilean precedent, and it will happen in other countries.”