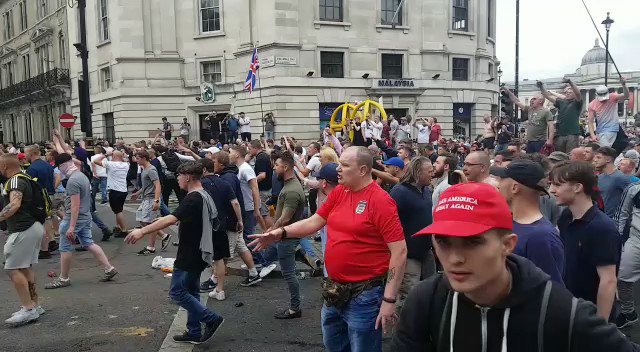 Robinson was arrested on May 25 outside Leeds Crown Court for reporting on a pedophile grooming trial. After a brief court proceeding without his lawyer, he was handed a 13-month prison sentence for violating the terms of a suspended sentence on a similar offense.

Now a groundswell of support and opposition to the government’s handling has erupted in protests across London and other places.

Over 600,000 people have signed a petition urging Theresa May to step in and free Robinson.

A squad of riot police blocking the gate down the mall leading to Buckingham Palace got into a scuffle with protesters, who threw a number of bottles, traffic cones and metal barriers at the officers.

At one point the police just fled: 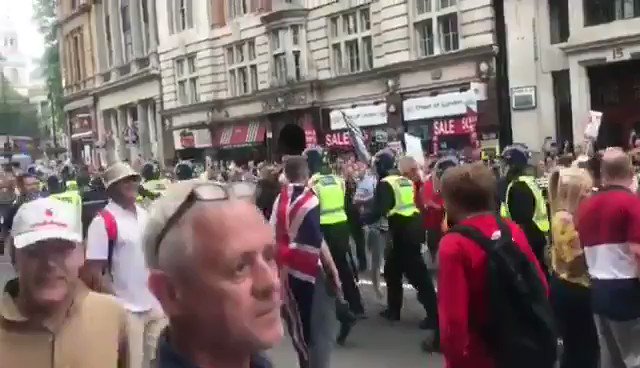 Five arrests were made, while five officers were reportedly injured in the clashes during the otherwise peaceful protest.

Dutch MP Geert Wilders, 54, showed up for the demonstration to call for Robinson’s release.

‘I am here to tell you that you will never walk alone. And we are here to tell the world, and the UK government in particular: “Free Tommy Robinson!

Downing Street is just around the corner, so maybe once again, as loud as possible we can let them hear our message: “Free Tommy Robinson! -Geert Wilders 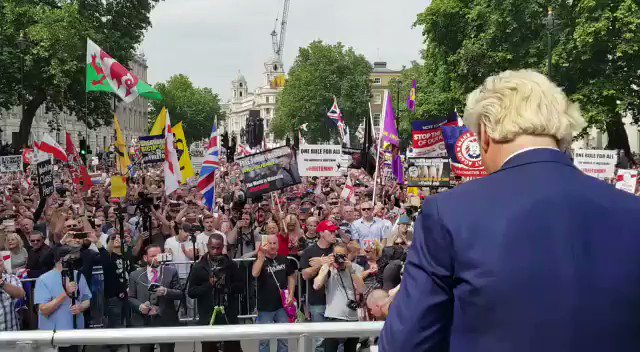 This prompted extended chants of ‘Oh, Tommy’ while Wilders continued saying to the crowd: ‘Tommy Robinson is a freedom fighter. He says what no-one dares to say. He has guts. He has courage.’ -Daily Mail

Wilders stated in a Breitbart op-ed:

Tommy Robinson was arrested on 25 May outside Leeds Crown Court after using social media to broadcast details of an ongoing trial which was subject to reporting restrictions. He was arrested, brought before a judge, and sentenced within five hours. The judge ordered a media ban on his arrest and imprisonment, even forcing British publications to delete their articles about the case.

Such measures are common practice in North Korea and Saudi Arabia. It is sad to see how Britain, the cradle of Western democracy and the rule of law, is fast descending into tyranny. –Breitbart

Robinson, 35, rose to fame as a conservative activist and founder of the English Defence League in Luton, Bedfordshire in 2009. After retiring from the party in 2013, he has continued to advocate for British nationalism and against unchecked migration into Europe.

He has also taken a particular interest in the grooming gang trials – a topic seldom covered by the mainstream press, and which Robinson has been speaking out about since at least 2011.

the whole subject is so ugly and uncomfortable that very few people care to linger over it. Robinson is an exception. For him — as he said in a 2011 interview with the BBC’s Jeremy Paxman — the “grooming gangs” issue isn’t something that afflicts some far-off towns but people in the working-class communities that he knows. And while there are journalists (notably the Times’ Andrew Norfolk) who have spent considerable time and energy bringing this appalling phenomenon to light, most of British society has turned away in a combination of embarrassment, disgust, and uncertainty about how to even talk about this. Anyone who thinks Britain is much further along with dealing with the taboo of “grooming gangs” should remember that only last year the Labour MP for Rotherham, Sarah Champion, had to leave the shadow cabinet because she accurately identified the phenomenon. –National Review

A group of 29 defendants are being tried for historical sex offences against children, split into three trials. Robinson was arrested at the second trial, while the first is ongoing.