Monsignor Raffaele Nogaro, bishop emeritus of Caserta, says he is ready to “turn all the churches into mosques if it were useful to the cause and if it allowed us to save the lives of men and women.”

And so the Catholic Church continues on its path of aiding and abetting Europe’s civilizational and cultural suicide — not unwittingly, but with its eyes open.

As I show in my book The History of Jihad From Muhammad to ISIS, the Catholic Church was once one of the foremost bulwarks of defense in the jihad against Europe. But those days are long gone, to the degree that those who call attention to the fact that Europe faces a resurgence today of the same threat that it faced for centuries are ruthlessly harassed and silenced by Catholic authorities.

“Leave them; they are blind guides. And if a blind man leads a blind man, both will fall into a pit.” (Matthew 15:14) 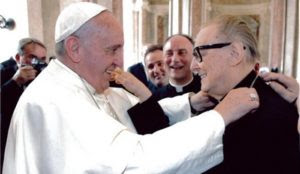 Street priests, nuns and missionaries in the square against Salvini: “Solidarity with migrants.” Ten days of fasting and protests between the Vatican and Montecitorio.

All against Matteo Salvini. Not just the left and the radical chic. Now the “red” priests, those commonly called “on the street,” the missionaries and the nuns, go down into the square.

To express their dissent, as had been announced by Giornale.it in the past few hours, they organized a sort of “relay fast.” For ten days they will take to the streets against the migrant policies of the Northern League minister, beginning today at noon on the dot, with “a day of fasting of justice in solidarity with the migrants” in front of St. Peter’s Basilica. Then, for another ten days, they will be in the same site in front of Montecitorio, where they will hold a permanent protest.

The supporters of the appeal are all men of the Church. We went to Father Alex Zanotelli, who signed on behalf of the Comboni Missionaries, to Monsignor Raffaele Nogaro, bishop emeritus of Caserta, to Fr Alessandro Santoro, who signed on behalf of the Community of the Piagge of Florence, to Sister Rita Giaretta of the Casa Ruth of Caserta. Recalling when Pope Francis challenged the restrictive policies of “Fortress Europe” during the Mass celebrated in Lampedusa for the 33 thousand immigrants who died in the Mediterranean Sea, the organizers asked: “Have you ever cried when you saw a boat of migrants sink?” Then, referring also to Cardinal Gianfranco Ravasi who, during the arm-wrestling between Salvini and the Aquarius ship, quoted the Gospel on Twitter: “I was a foreigner and you did not welcome me.” “The choices of the government are incompatible with the Gospel and with the Constitution,” explained Fr Alessandro Santoro, of the community of the Piagge of Florence, to Fatto Quotidiano: “we defend the principle of humanity with the weapons we have: our bodies.”

And the protest of the street priests has fallen on deaf ears. But the protesters will go on to protest against Salvini again in the coming days. “We will continue in Montecitorio to testify with fasting against the migration policies of this government,” said Father Zanotelli. “We will continue to fast for another 10 days with a protest in front of Montecitorio from 8AM to 2PM.” “Have you ever cried when you saw a boat of migrants sink?”, asks the priest, adding that “the shipwreck of migrants, the poor, the desperate is also the shipwreck of Europe, and its ideals of being the homeland of human rights.”

Next to Father Zanotelli, in San Pietro, there was also the cartoonist Vauro Senesi. The two read the words spoken in an interview by Monsignor Raffaele Nogaro, bishop emeritus of Caserta, in which he said he was ready to “turn all the churches into mosques if it were useful to the cause and if it allowed us to save the lives of men and women.”