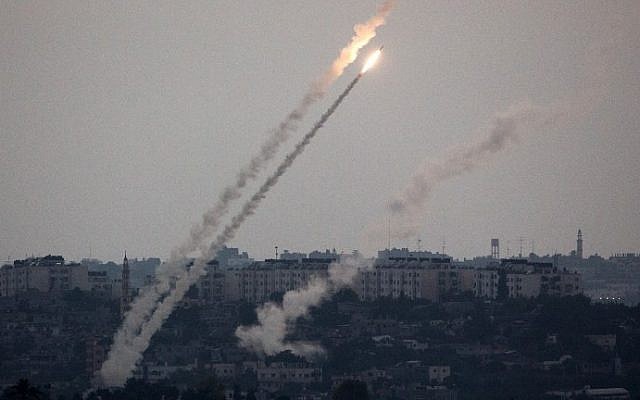 14 July 2014 Halturnershow All hell is breaking lose between the Israelis and the Arabs in the West Bank/Gaza Strip.  LIVE UPDATES

For several days, arson balloons and flaming kites have been causing blazing fires in summer-scorched Israel.The Israeli Defense Force has taken steps to slow those attacks, to little effect.

Yesterday, Rockets were launched out of Gaza into Israel on such a scale that 16 Israeli towns were under Air Raid Sirens.   The IDF sent fighter jets to attack the rocket launch sites and they did.

Today, HAMAS is ordering a “Full Mobilization” in order to attack Israel.

As of 11:51 AM eastern US time on Saturday, July 14, rockets and mortars are being fired into Israel on a large scale.

This story will be updated

HEAVY ISRAELI AIRSTRIKES IN HEAVILY URBAN AREAS OF CENTRAL GAZA CITY; NUMBER OF BUILDINGS HAVE BEEN HIT.
REPORTS : A CAR WITH PEOPLE WAS BOMBED IN CENTRAL #GAZA

Ashkelon is under rocket fire now. This is a clear sign of escalation. The rockets are now going farther.

Situation in Gaza spinning out of control despite Egyptian mediation effort:
– Palestinian report as many as 12 wounded following strike in Gaza’s Shati (IDF says building is a Hamas facility)

Casualties on both sides:

FYI: Israel is seven (7) hours ahead of east coast US time.

An emergency cabinet meeting on Gaza has just ended, according to local sources. IDF to commence a “larger operation” imminently!

A Senior Western Diplomat” tells me there is progress in talks on a cease fire in Gaza. Next hour will be critical.

Israel has given an ULTIMATUM to Hamas: Agree to stop all Arson attacks (Balloons and Kites) and all Rocket/Mortar attacks or Israel will not stop air strikes until such things are ceased.

If that means all of Gaza must be destroyed, so be it.

Israel Prime Minister says  “if Hamas does not understand the message today, it will understand by tomorrow.”

The major sticking point in the ceasefire talks are the fire kites, balloons and border riots.

Israel says no ceasefire without their cessation.

Hamas refuses to stop them, claiming it is their ‘right’ to protest ‘the occupation of our land’ in whatever form they deem necessary.

Palestinian sources in Gaza: Hamas armed wing decided to push for an escalation after understanding that humanitarian benefits and a long range truce with Israel could only happen after an armed conflict in Gaza

Palestinian media is laying it on thick. They’re showing images of buildings hit by Israel next to pictures of ‘parks’ that supposedly sit right next to ALL of them, filled with ‘children at play.’ The coverage basically conveys “How could Israel target those buildings then they can clearly see children right next door?”   Funny how they don’t find anything wrong with shooting their rockets into Israeli kindergartens though.

Unconfirmed reports that the Egyptian mediated ceasefire plan has faltered.

Residents of Gaza say they are very worried there will be a new war, families are apparently rushing out to buy supplies fearing the worst. Families in southern #Israel are also fearful that this escalation will only get worse. Hoping all are safe tonight.

Palestinian media reports the launch of 30 molotov balloons towards Israel.

Many more rocket and mortar launches from Gaza into Israel.

(HAL TURNER NOTE: On June 5, 1967, in an overheated political atmosphere, weeks after Egypt blockaded the Straits of Tiran and cut off Israeli shipping, Israel launched an attack against Egypt, beginning the Six-Day War. It rapidly defeated the surrounding Arab states and took control of, among other areas, the Gaza Strip.   Most of the people living there today wee not even ALIVE when that land was conquered, yet they still claim the land is “theirs.”   Foolish perception, but no excuse for launching “Molotv Balloons into Israel to set fire to whatever they hit.  No excuse for firing rockets and mortars into Israel.  These people are bringing Israeli military reprisals UPON THEMSELVES.)

The IDF have now announced the largest mobilization since “Protective Edge” in 2014. Also the largest prepping of military aircraft since that time is now underway.

.Also, the Palestinians have fired more projectiles in daylight hours than in any time in the last 4 years too.

173 mortars/rockets fired in to Israel today