Pan-religious sentimentality survives in the current pope’s apparent embrace of Islam as morally equivalent to Judeo-Christian ethos and culture.

St. Francis of Assisi traveled to Egypt in 1219 with the Fifth Crusade, determined to proclaim the truth of the gospel to Sultan al-Malik al-Kamil. Celebratory anticipation of the 800th anniversary of that meeting between saint and sultan began two years ago with Pope Francis’ trip to Egypt. Initiated by the Franciscans, the extended jubilee culminates this March with a papal visit to Morocco.

Vatican media foregoes the traditional papal insignia in promotion of this trip. Apropos of our age of slogans and Instagram politicking, it has chosen instead a logo created specifically for the event. Vatican News explained the choice: “A cross and a crescent . . . are symbols of Christianity and Islam which highlight the interreligious relation between Christians and Muslims.”

Interreligious relation is an airy trope drawn from the optimism of Pope John Paul II. During a memorable 1986 inter-faith convention in Assisi, John Paul hailed “the seeds of truth found in all religions.” He sealed the words with a respectful kiss on a Koran. A balmy ménage of many-colored pieties and alternative practitioners, the event buoyed enthusiasm for religious relativism. Its pan-religious sentimentality survives in the current pope’s apparent embrace of Islam as morally equivalent to Judeo-Christian ethos and culture.

Since 1986, Islam’s character and purposes have become clearer. Evidence of the scale of its distance from Assisi’s cross-cultural smorgasbord of religious impulses has sharpened. If this Vatican logo tells us anything, it is that Pope Francis is comfortable with Islam’s ascendency. The “relation” made visual here is one of domination. Take a look. 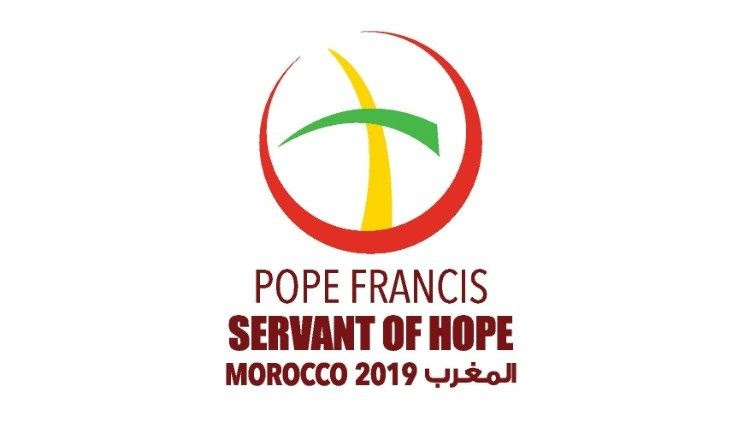 This crescent does not appear alongside the cross, as if a companion to it.

Rather, the Islamic symbol encircles the Christian one.

What passes for a cross is feeble, barely recognizable. A watery post and cross beam curve like the blade of a scimitar, more evocative of the sword of Allah than the rood on which Christ hung. It is a logo for dhimmis.

Emphasizing Pope Francis’ personal comity with Islam, the design reflects the amour propre of a 21st-century ecumenist who mistakenly sees himself in the footprint of his namesake. Our self-styled “Servant of Hope” acts and speaks in disregard of Islam’s lethal rejection of Christianity and its doctrinal premises—a fatal blunder that the friar of Assisi did not make.

Nothing could be further from the sensibility of the historic St. Francis than concession of his faith’s truth claims in order to coexist with Islam. His aim was conversion, not reciprocal understanding. However pacific his proselytizing manner, he held fast to the stern substance of St. Paul’s words: “Do not be unequally yoked with unbelievers… What accord has Christ with Belial? Or what portion does a believer share with an unbeliever?” (2 Cor. 6)

Despite commemorative hype—a soothing blend of anachronism and myth— the difference between the travels of these two Francises is vast. Il Poverello was not “reaching out” to the sultan in a gesture of interfaith dialogue. He was seeking the conversion of Islam via baptism of the sultan; Pope Francis seeks only rapprochement.

A former soldier himself, St. Francis was militant in his intentions, if peaceful in his methods. Present depictions of the saint as a proto-ecumenist are historical distortions. Yet it is that distortion that fuels Pope Francis’s “outreach” style.

Driven by love of the Triune God—even, perhaps, by ambition for a martyr’s crown—Francis left the protection of the crusader camp and crossed battle lines to sway the Egyptian sultan to accept the tenets of Christian belief. The sultan, for his part, had pressing diplomatic reasons to receive this preacher with courtesy. Anything less would have been impolitic. Under siege at the time, and certain that surrender of Jerusalem was inevitable, the sultan hoped for a settlement with the Europeans.

Despite his admiration for this gutsy, charismatic friar, the sultan was unpersuaded by Christianity. Once Francis recognized the futility of his mission, he returned home. He did not stay for conversation over—to quote John Paul II— the “role of the great monotheistic religions in the service of the human family.”

Omer Englebert’s classic “St. Francis of Assisi: A Biography” tells of Francis, on his arrival in Italy, reacting to news of five ardent friars who had been martyred in Morocco. The men had entered a mosque, denouncing Mohammed (“that wicked slave of the devil)” from inside. They paid with their heads. Did Francis apologize for their insensitivity? No. The saint was jubilant: “Now I can truly say that I have five brothers!”

St. Francis’ open, unabashed fidelity to his belief in the supremacy of Christian mystery is obscured by substituting a modern logo for the ancient papal insignia. The papal crest, like any heraldic device, represents the larger corporate body to which an individual belongs. The papal emblem is a badge of office; it indicates the bearer’s rank within a greater entity. The papacy, after all, is an office, not a brand.

A logo, by contrast, is a marketing device. Addressed to consumers of a brand, the Vatican’s logo markets Pope Francis himself as the avatar of a beloved saint—a commodity for pious consumption. Tragically, the medieval Francis is better known in caricature and legend than in fact. That the Vatican has chosen a trademark suitable to the caricature bodes ill for the Judeo-Christian West.

Maureen Mullarkey is an artist who writes on art and culture. She keeps the weblog Studio Matters. Follow her on Twitter, @mmletters.