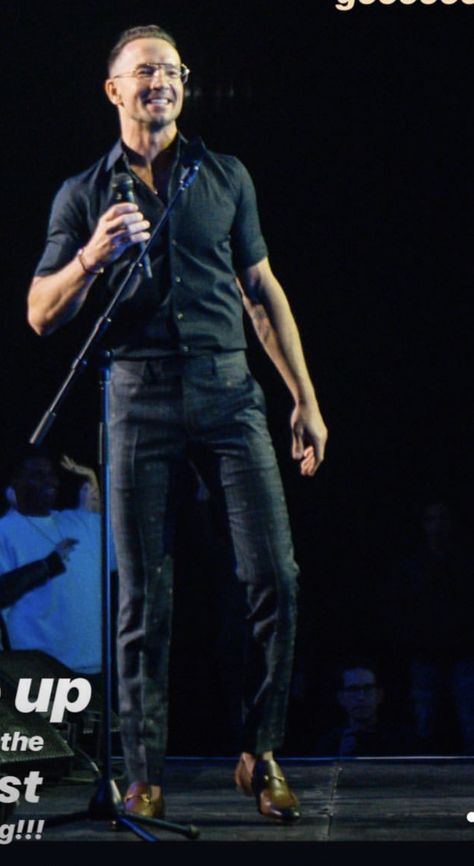 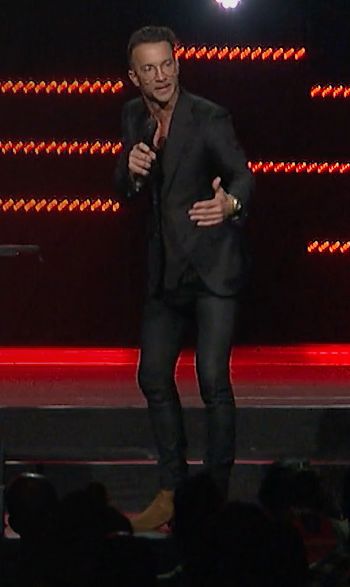 Hailey Baldwin considers “church wife” to be an aspirational look, according to her Twitter and her stylist’s Instagram.

If you mostly know Baldwin through social media, which features myriad images of the model wearing scanty lingerie or revealing dresses, that may seem incongruous. But if you know the churches she’s referencing — and the ministers that lead them — it’s less surprising.

Megachurch pastors Carl Lentz, Chad Veach, Rich Wilkerson Jr. and Judah Smith may not be household names outside Christendom, but you can bet that Hailey Baldwin knows who they are. She, along with stars like Justin Bieber, Selena Gomez, Luka Sabbat and Khloe Kardashian, has attended their churches, been photographed with them repeatedly and shouted them out on social media.

With millennials leaving the American church “in droves,” how do these pastors continue to draw thousands of young, culturally aware people to their Sunday worship services? The answer is complex, of course, but there’s no doubt that fashion plays at least a supporting role. 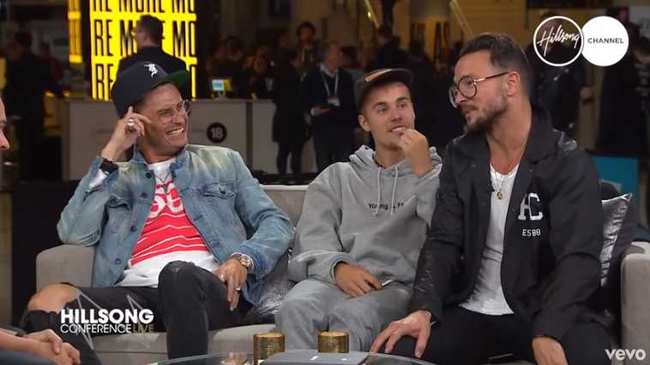 “I remember hearing about this church called Hillsong from a coworker of mine,” says celebrity tattoo artist Jonboy, who has inked the likes of Kendall Jenner, Sofia Richie, Bella Hadid and Zayn Malik. “And my first question was, ‘Can I wear a hat?'”

For Jonboy, finding out that he could wear what he wanted to church — and seeing that Lentz, the lead pastor, had tattoos of his own — was enough to get him in the door. The sense of God’s presence that he says he felt there is what made him stay.

Jonboy, who “rededicated his life to Christ” after landing in a New York jail cell, has now been attending Hillsong for five or six years.

IS CHURCH MERCHANDISE THE NEXT BIG THING IN STREETWEAR?

It’s not just that pastors like Lentz have tattoos, though. They also wear capital-F fashion. And while they may not talk much about the brands they wear or tag them on Instagram, those in the know can easily recognize Supreme, Common Projects, Gucciand more as their wardrobe staples.

All this is nothing more than making God glamorous!

Fear of God is one brand that seems to inspire particular devotion from the four, perhaps in part due to the fact that the designer is an outspoken Christian who celebrates family birthdays with Veach and got to know Wilkerson through their mutual friend Kanye West. Saint Laurent is another all-around favourite, which may or may not have something to do with the fact that the CEO of Saint Laurent North America vacations with Lentz and his family.

Not all church attendees can afford to cop designer pieces like the ones they see worn behind the pulpit. But that doesn’t stop their followers from emulating their pastors’ looks. 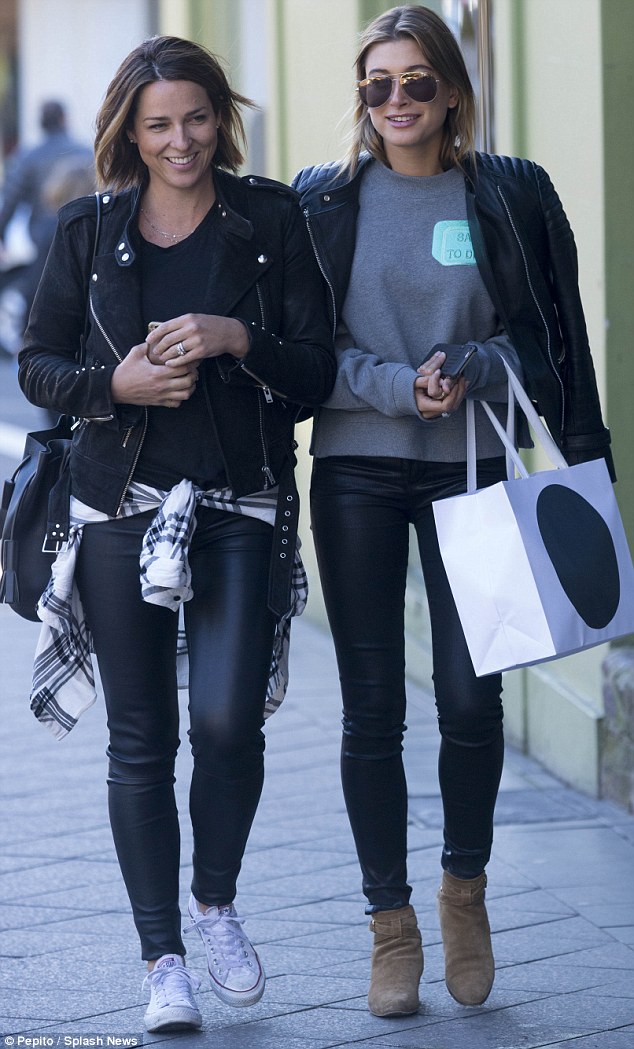 Twinning: Hailey Baldwin and Laura Lentz were spotted wearing matching leather outfits as they headed out on a shopping trip in Sydney on Wednesday ahead of the final days of the Hillsong Conference

“They’re influencers for their own churches. It’s really funny,” says Clayton Chambers, a former buyer at Barneys New York and co-founder of a popular menswear blog. “People literally look just like how their leadership dresses.”

That becomes a lot easier to pull off when their churches put out accessibly priced merchandise that the pastors themselves take to wearing, as has been the case with Wilkerson’s Vous church (which partnered with Fear of God for merch designs a few years back) and Veach’s Zoe church (which uses the same guy for its pop-ups that Kylie Jenner does to market her Lip Kits). Zoe’s merch, in particular, inspired almost Supreme-like devotion from some fans, with proxies showing up to buy pieces for out-of-towners like Jonboy, who copped some even though he didn’t attend the conference they were being sold at.

à la Hailey Baldwin, want to dress like the women they marry. Interestingly enough, they’re not quick to acknowledge their potential as fashion influencers and seem to have some ambivalence about how their style might affect their ministry.

“I don’t see myself as an influencer in fashion at all,” says Veach. “I’ve been just really blessed to have guys that are close friends in the industry.” Still, he acknowledges that dressing a certain way can provide a quick “in” with people who might otherwise write him off. “If I walk into a place and I’m wearing something that makes people go, ‘that’s a cool outfit,’ I am working with an advantage, rather than a disadvantage of like, ‘man, those are really whack sneakers.'”

Fear of God designer Jerry Lorenzo is similarly hesitant to call his famous pastor pals fashion influencers, but he acknowledges that there is something about their approach to getting dressed that communicates to people differently than their buttoned-up predecessors did.

That attitude isn’t limited to pastors with celebrity congregants. Levi Lusko, Robert Madu, Micah Berteau and Chris Durso are representative of another group of pastors, who may not visibly hobnob with celebrities as much but who also preach to large congregations and love fashion. They are all adamant, as is Veach, that they participate in fashion because they genuinely enjoy it, not because they’re trying to impress onlookers.

And it’s a good thing, because the very things that seem to impress some people are a distinct turnoff to others. Every megachurch pastor has his share of detractors who see his affinity for expensive clothing and high-profile friendships as contrary to the way of Jesus of Nazareth, who often gravitated toward the poor and oppressed. Still, for those who experience fashion (or even fame) as inextricable from their careers and social circles but still want to be involved in a church, the leadership of these pastors may seem like proof that they don’t need to leave the faith.

But ultimately, a compelling church service has to be about more than the brands that are worn onstage. Even Jonboy, who acknowledges that fashion provided an entry point for him when it came to re-engaging with church, argues that the message preached by someone like Lentz is strong enough to stand on its own, even sans the cool shoes and ripped jeans.

“Ultimately, what is our brand?” asks Veach. “Our brand is the gospel. Our brand is Jesus. We’re trying to sell the good news of who Jesus is.” If a hypebeast-worthy look is what makes you open to hearing about that, these guys are all for it.

The Christian music industry is now celebrity driven. The song is irrelevant. The focus is on the person, and the songs have become disposable. Most of our ills can be directed at this circus of Christian entertainment, which is giving a generation a palatable Christianity, a people who know nothing of seeking after God. We are now seeing a crisis among today’s Christian youth.

Today this error is flooding into the church under the guise of ‘relevance’. In the name of relevance or purpose, we are rushing around, desperately trying to make our music cool, our leadership cool, our gospel cool, and our youth events cool—all in an effort to attract the world on its terms.

Instead of ‘holier than thou’, we are cooler than thou. Our whole effort is aimed at proving to the world that Christianity is just as much cool, just as much fun, and just as much of a party as the world has to offer. We feel we have to become just like the world in order to impress the world. Thus, we now need to be seen in fashionable (or, better still, hip or alternative) clothes.

And our youth events become an excuse for a party. And our presentations become entertaining multimedia extravaganzas.

This is all in an effort to be equal or out-cool the world, which is why you now see ‘moshing’ heads, slam dancing, and stage diving at youth concerts, matching the world’s mindless hedonistic ways. We have become lovers of pleasures more than lovers of God. Being cool yet full of pride, worldliness, and rebellion—all in the name of relevance. Just like the world in every sense. Unfortunately, many of these ‘cool’ Christians do not realise that in order to impress the world, they have to compromise some of the most vital elements of New Testament Christianity. This is the path of believers going to Hillsong.

There is a real danger of the emergence of the ‘concert Christian’, the semi-converted, shallow, committed teenager whose Christianity means little more than that he enjoys conferences and festival going.

And the tragic fact is that such concert Christians are now found in their multiplied thousands around the globe. It is not just the large festivals and concerts that have succumbed to this spirit of entertainment.

We now find this ‘entertain-them-at-all-costs’ approach to youth ministry everywhere, from local church youth right up to large regional gatherings. This spirit has pervaded everything, particularly those areas in the church that are connected with young people. In fact, it has become increasingly rare to find gatherings of Christian youth now in which these attitudes do not prevail.

This begs the question, can Carl Lentz be an ‘apostle of cool’ and an apostle of Christ? New York’s trendy Gen-Y crowd are drawn every Sunday by this new pastor of chic. Can Christianity be this cool and still be Christian?

Show up for a Sunday service at Hillsong NYC and the first thing you notice about the audience is it’s seems they’re all united in wearing the same thing, like a badge or a uniform. Conformity seems to be the way Hillsong is reforming Christianity.

In the world of sales, if a product is not selling, you revamp it, rename it, give it different packaging, and promote it to a different audience. That’s what they have done. They have made Jesus a product. You see, a product can change, but the TRUTH cannot.

By the way, where is Jesus in all this?

The Lord Jesus was a humble carpenter from the small village in Nazareth. He is our example? Not this glitz and glamour!

Do Not Be Puffed Up with Pride

6 And these things, brethren, I have in a figure transferred to myself and to Apollos for your sakes; that ye might learn in us not to think of men above that which is written, that no one of you be puffed up for one against another. 7 For who makes thee to differ from another? and what hast thou that thou didst not receive? now if thou didst receive it, why dost thou glory, as if thou hadst not received it?

8 Now ye are full, now ye are rich, ye have reigned as kings without us: and I would to God ye did reign, that we also might reign with you. 9 For I think that God hath set forth us the apostles last, as it were appointed to death: for we are made a spectacle unto the world, and to angels, and to men. 10 We are fools for Christ’s sake, but ye are wise in Christ; we are weak, but ye are strong; ye are honourable, but we are despised. 11 Even unto this present hour we both hunger, and thirst, and are naked, and are buffeted, and have no certain dwelling place; 12 And labour, working with our own hands: being reviled, we bless; being persecuted, we suffer it: 13 Being defamed, we entreat: we are made as the filth of the world, and are the offscouring of all things unto this day.

Why is Hillsong offering a repackaged celebrity?

In our culture driven by and obsessed with celebrities, ones like Jay-Z and Justin Timberlake admit that it is not all it appears to be on the surface.

King Solomon came to realise the answer to finding purpose, and it wasn’t in endless pleasures. ‘Let us hear the conclusion of the whole matter: