Smoke and flames rise during a fire at the landmark Notre-Dame Cathedral in central Paris on April 15, 2019, potentially involving renovation works being carried out at the site, the fire service said. – A major fire broke out at the landmark Notre-Dame Cathedral in central Paris sending flames and huge clouds of grey smoke billowing into the sky, the fire service said. The flames and smoke plumed from the spire and roof of the gothic cathedral, visited by millions of people a year, where renovations are currently underway. (Photo by FRANCOIS GUILLOT / AFP) (Photo credit should read FRANCOIS GUILLOT/AFP/Getty Images)

They literally watched the arson fire in real time

It appears that this story has triggered the isolation of key information points on the web to prevent it from going viral. Additionally some of the re-posts of this people copied from here and put elsewhere used the earliest version that is not worded as well or as completely (and has a less clear Michelle watching it burn photo, my error, I accidentally downscaled it) so you might want to put it back up again with the final write that is now posted.

This is going to be the top posted report for several days, and it will not drift down the page. If you link this, it will be what people see on top.

To get this all started: I had heard of Michelle Obama’s dinner cruise coinciding with the burning of the cathedral, but was not certain it would be possible to pin it down on her.

Michelle Obama was spotted on an idyllic dinner cruise in Paris when she and the other guests learned that the nearby Notre Dame Cathedral had gone up in flames.

The former first lady boarded the boat with her fellow passengers just across from the Eiffel Tower on Monday evening and set off along the Seine River.

Mrs Obama was pictured smiling and sipping wine as she mingled with other guests on the roof of the luxury boat as they cruised past the iconic monuments of Paris. 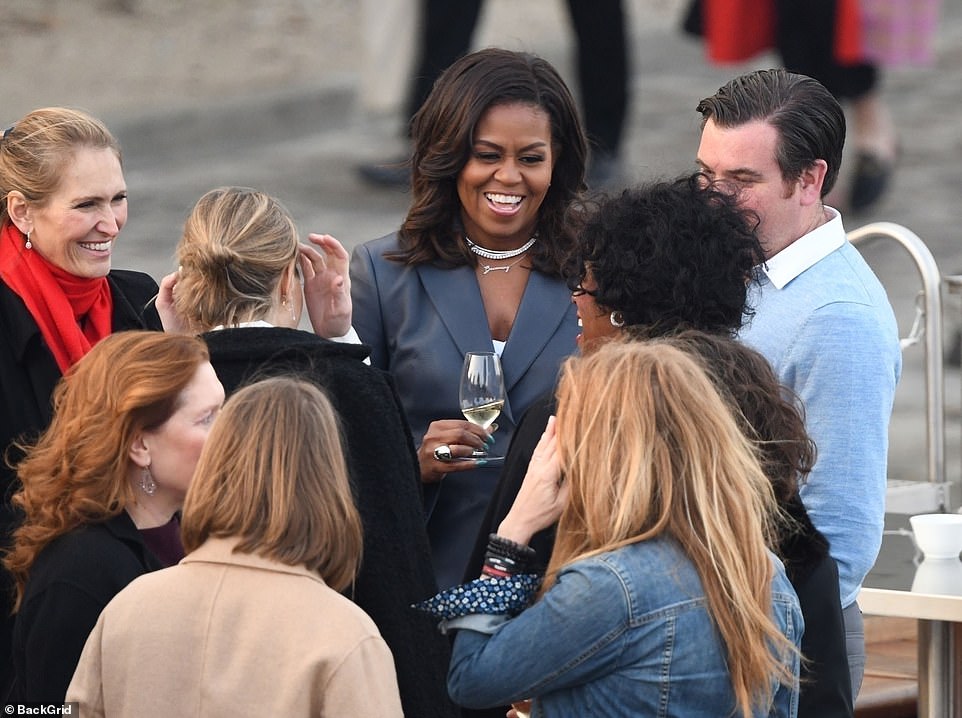 As it turns out, it was possible to. Other people had already posted on this topic, but the work was done in a way that could be questioned as to how legit it was. So I set out to see if there was a way to actually pin it down, and there was a way. There is no doubt the elite New World Order crowd burned Notre Dame and celebrated, I have this sewn up in a body bag. Let’s get started.

The mood of passengers changed when news of the fire at Notre Dame filtered through. At one point during the cruise, Mrs Obama stared intently at a fellow passenger’s phone

OK, SO NOW I AM GOING TO SHOW YOU WHAT REALLY HAPPENED, AND IT IS ALL RECORDED IN THE WINE GLASSES. THIS IS NOT DEPENDENT ON THE “QUESTIONABLE”(not questionable really) MICHELLE OBAMA WINE GLASS PHOTO YOU MIGHT HAVE ALREADY SEEN, instead, it shows how people on the boat were reacting and socializing when they knew the cathedral was burning.

The cruise departed AFTER the cathedral was already hurling smoke into the sky. This is proven by the reflections in the wine glass in this photo which shows a rather happy Michelle Obama. You can’t see the actual cathedral in this photo yet because the dinner cruise is not close enough yet but they are all happy and they definitely know it is burning.

A little later in the cruise, we still have a very happy Michelle Obama, with the smoke from the burning cathedral still in her wine glass:

In this next photo (below), they are close to the burning cathedral, it is OBVIOUS WHAT THIS IS, and you can see the burning cathedral clearly reflected in Michelle’s wine glass. Other sites that found this only showed Michelle, and did not give the context which put all of this in doubt because after all, that photo could have been pasted onto that wine glass with a little photoshop. PROBLEM: This actually is an original photo that appeared in original form in THIS NEWS REPORT which proves it was not photoshop, that’s an actual photo in original form.

LOOK AT THE PEOPLE ON THIS YACHT. THEY ARE NOT SAD AT ALL THAT THE CATHEDRAL IS BURNING, AND THE LOOK ON MICHELLE’S FACE IS ONE OF VINDICATION. SHE’S NOT SAD, SHE’S VENGEFULLY SATISFIED. THIS CINCHES IT – THE CRUISE WAS DONE TO WATCH THE CATHEDRAL BURN. THE PEOPLE ON THE BOAT SET THIS UP.

And here is what Michelle was looking at, that was reflected in her wine glass: (look closely on the glass near her left upper lip)

All the news reports said Michelle did not get close enough to see the cathedral this way. The wine glass DID NOT LIE. 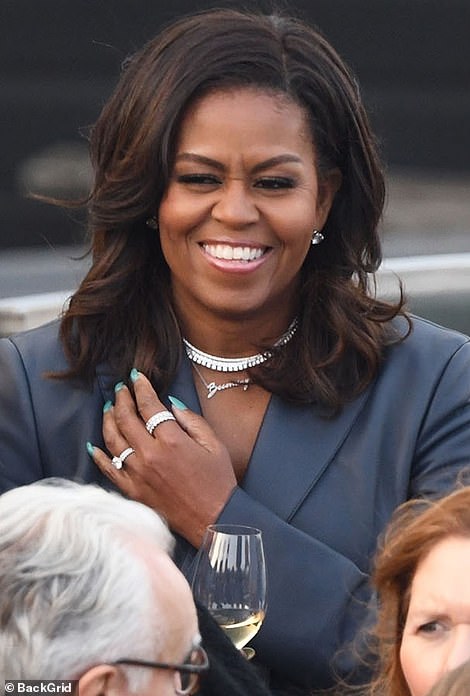 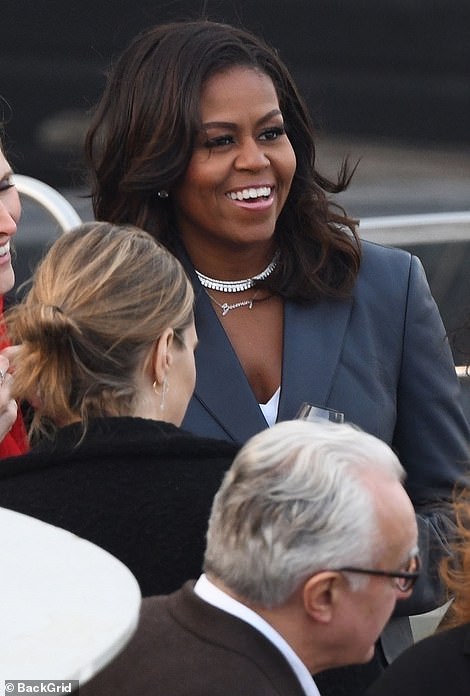 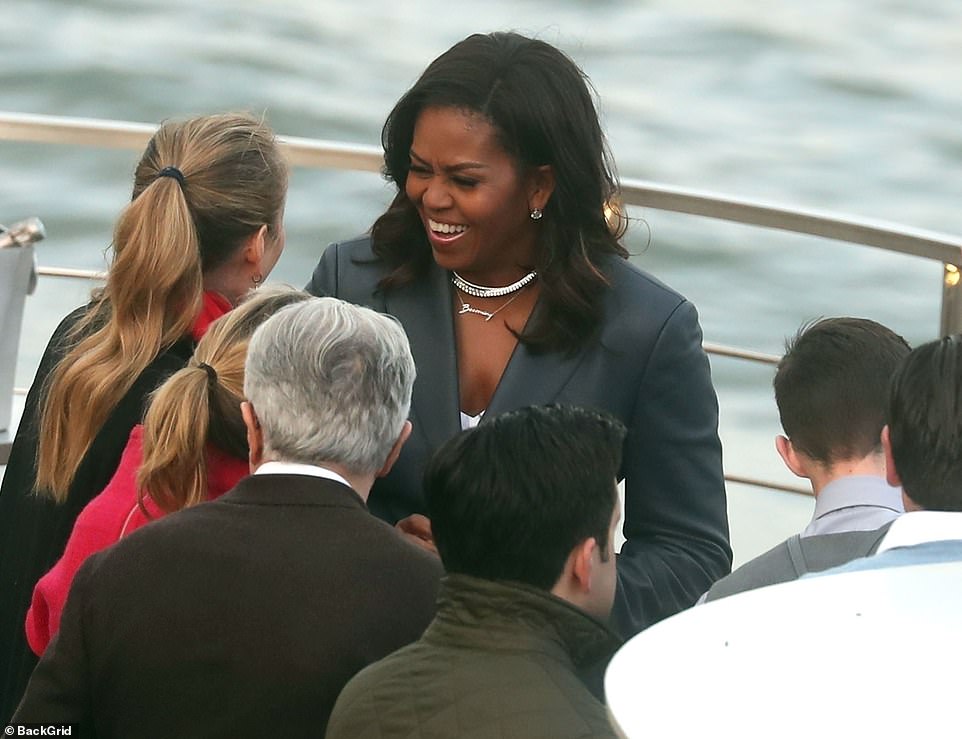 Mrs Obama was in Paris to promote her new memoir Becoming

Why would they get close enough to witness it like this? It is called a “victory tour”.

IMPORTANT: The news report I linked does not quote what is shown in the pictures in order or accurately at all, the photo where they are right up to the burning cathedral with it clearly showing in her wine glass is supposed to be from before she knew it was burning according to the reports.

Obviously whoever put the MSM report together thought that because the chinese girl is very happy in the background they did not know yet and whoever wrote the report can’t look at a wine glass and was too clueless to know they wanted this.

2 thoughts on “Notre Dame: Michelle Obama and Global Elite Watched on and Celebrated as the Church Burned!”