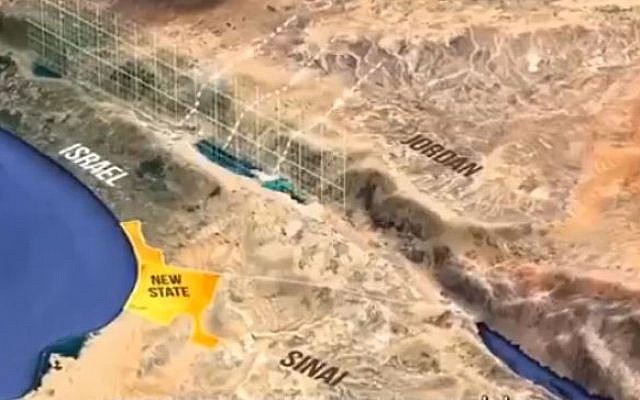 Screencapture from a video purporting to show a plan to to give the Palestinian part of the Sinai for a future state. US envoy Jason Greenblatt denies this is part of the Trump peace plan, Aprli 19, 2019. (Screencapture/Twitter)

WASHINGTON — US Mideast envoy Jason Greenblatt on Friday denied rumours that the soon to be released Trump peace plan calls for the Palestinians to be given part of Egypt’s Sinai Peninsula for an expanded Gaza.

“Hearing reports our plan includes the concept that we will give a portion of Sinai (which is Egypt’s) to Gaza. False!” tweeted Greenblatt.

With the Trump team keeping the details of the plan close to their chests (and with one report indicating that even US President Donald Trump has not seen the entire plan), rumors of its content have repeatedly swirled, particularly on social media.

“Please don’t believe everything you read. Surprising & sad to see how people who don’t know what’s in the plan make up & spread fake stories,” Greenblatt said.

Hearing reports our plan includes the concept that we will give a portion of Sinai (which is Egypt’s) to Gaza. False! Please don’t believe everything you read. Surprising & sad to see how people who don’t know what’s in the plan make up & spread fake stories.

Reports had circulated in recent days that under the deal, Egypt would give up a chunk of the northern Sinai that lies next to the Gaza Strip for the creation of something called the “New State.”

A video, purportedly from the Trump team, detailing the plan is apparently from an independent Israeli think tank called New State Solution.

The “Kushner-Trump Deal of the Century”: Gaza City + parts of the Sinai Desert become The New Palestinian State!

Attractive features include:
•Bankrupt Egypt to be patron
•Pay Palestinians to vacate their land in West Bank
•Israel to hold control of “border”

Israel conquered the Sinai from Egypt in the 1967 Six Day war but returned it as part of the peace deal with Cairo signed in 1979. The Egyptians are currently battling an Islamic State-linked insurgency in the region. Egypt has also said in the past that it would not give up parts of the peninsula.

The US administration’s peace plan will not be unveiled until June at the earliest,  Trump’s senior adviser and son-in-law Jared Kushner said Wednesday.

Kushner told some 100 foreign diplomats the plan will be rolled out after the new Israeli government is sworn in and following the Muslim holy month of Ramadan, which ends June 5.

He urged them to keep an “open mind,” according to a source cited by the Reuters news service.

“He said the plan will require concessions from both sides but won’t jeopardize the security of Israel,” Reuters quoted the source as saying. 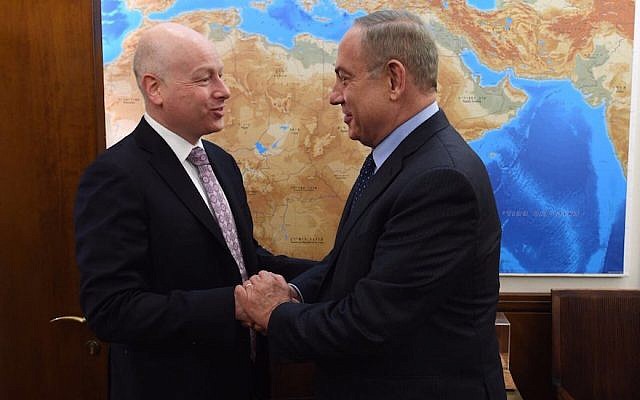 Little is known about the long-awaited plan, though recent reports in the Washington Post and Guardian suggested it would not include full Palestinian statehood.

That is a likely deal-breaker for Palestinians, who were already not cooperating with Trump’s Middle East team following the US president’s recognition of Jerusalem as Israel’s capital in December 2017 and moving of the US embassy there in May 2018.

Greenblatt has been sparing with Shtayyeh on Twitter over the deal in recent days.

Basically, you’re saying: give us the deal we demand, or no deal. That’s consistent with Palestinian prior attempts. How has that worked out for Palestinians? Do you want to lead your people to opportunity & prosperity or just keep saying the same tired lines over & over again?

Any Political initiative that does not call for ending Israeli occupation and establishing an independent and sovereign Palestinian State with Jerusalem as its capital on the borders of 1967 with settling the refugees cause is not acceptable to the Palestinians.

At a pre-Passover White House event for conservative Jewish groups on Tuesday night, Israel’s ambassador to the US said he was confident the plan, whose details are not yet known, will “take Israel’s vital concerns into account.”

“I know a lot of people are concerned that the peace plan is going to be coming out soon,” Ron Dermer said, according to the Jewish Insider website.

“But I have to say, as Israel’s ambassador, I am confident that this administration — given its support for Israel — will take Israel’s vital concerns into account in any plan they will put forward.”

Last Friday, US Secretary of State Mike Pompeo, in an interview with CNN’s Jake Tapper, said the peace plan that the White House is expected to roll out will “represent a significant change from the model that’s been used.” Kush. Photo: Courtesy of CC/Flickr/Dominique A. Pineiro
By Matt Stieb

For her new book Kushner Inc., journalist Vicky Ward interviewed some 220 people to better understand the roles of Jared Kushner and Ivanka Trump within the tumultuous White House. Ward found that the power couple is quite power hungry, demanding to travel free on the State Department’s dime and skirting around the “no’s” of former Secretary of State Rex Tillerson.

According to a copy of the book seen by the Jerusalem Post, Kushner wanted:

… the Saudis and Emiratis to provide economic assistance to the Palestinians. There were plans for an oil pipeline from Saudi Arabia to Gaza, where refineries and a shipping terminal could be built. The profits would create desalination plants, where Palestinians could find work, addressing the high unemployment rate.

According to Ward, who spoke with “multiple people who saw drafts of the plan,” Kushner proposed a geopolitical version of the multi-destination NBA player swap, in which Jordan would give territory to the Palestinian authority, and “in return, Jordan would get land from Saudi Arabia, and that country would get back two Red Sea islands it gave Egypt to administer in 1950.”

So, the alleged plan would involve no less than five countries (plus Palestine) coordinating to give aid or renegotiate boundaries in the most politically convoluted region on the planet. Note that the proposal, as detailed, does not require the Netanyahu government — a close ally of Kushner’s — to make any significant concessions. Not to mention, desalination plants aren’t exactly efficient, producing 1.5 times more unusable brine than potable water.

In Kushner Inc., Ward also reports on the president’s son-in-law’s foreign policy coup. “Kushner took the Middle East from Tillerson’s portfolio,” Ward wrote. “‘I want Israel,’ is how he put it, according to a former Tillerson aide … Tillerson, a former Boy Scout, tried to work with Kushner because he thought it was the right thing to do.”

The White House envoy to the Middle East, Jason Greenblatt, has denied the book’s details of the Middle East plan. Whether or not the final product looks like the draft described to Vicky Ward, Kushner’s peace proposal is expected sometime after Israel’s election scheduled on April 9. Last month, Trump’s senior advisor described his plan — in a typically vague statement — as “really about establishing borders and resolving final-status issues … The plan will have a broad economic impact, not only on Israel and the Palestinians, but on the entire region as well.”