I appeal to you, brothers, to watch out for those who cause divisions and create obstacles contrary to the doctrine that you have been taught; avoid them. For such persons do not serve our Lord Christ, but their own appetites, and by smooth talk and flattery they deceive the hearts of the naive.  Romans 16:17-18

Pope Francis is a firm believer in ecumenism, not because he believes in alternate points of view, but because he knows the charismatics and pentecostals so led by their feelings and so light on doctrine are very easily led. And where is he leading them?

That doctrine-denying ecumenism is running amok in the evangelical church is an understatement of epic proportions.  The safeguards of the faith founded in the sound doctrine of the Word have been all but cast aside in, to an onlooking post-modern worldview, an admirable spirit of tolerance.  But where the world, currently controlled by the enemy of our Lord, lauds tolerance, the Apostle exhorts the church to be intentional in avoiding those with “contrary doctrine.”

Ecumenism of a dangerous, virulent sort was exhibited at the recent Passion Conference. (For more on Passion, go HERE.)

The joining together of known false teachers and those who have been previously seen as reliably orthodox is not a thing to be lauded, but a warning sign to be seen.  It is a sign of the lowering of doctrinal standards.  It is a sign of acquiescing to the spirit of tolerance which deceptively rules the age.  And, it is a sign of the self-perpetuating downgrade of the visible church.

But this discernment-free ecumenism is not a recent development for Passion front-man Louie Giglio.

Back in July 2015, Giglio was granted by the Vatican an invitation for a meet and greet with the chief apostate on the planet. According to a Catholic News Agency article emphasizing Francis’ active engagement in seeking a re-establishment of relations with evangelicals – particularly charismatics – present at the meeting was, “Rev. Louie Giglio, from the Passion City Church of Atlanta.”  (Source)

A video of the “holy kiss” meeting of Giglio and Francis is provided below.  Starting at the 00:49 mark, Louie, then his wife Shelly, are granted a greeting with the pope.

Mixed in amongst this Laodicean smorgasdboard was Pastor Louie Giglio of the Passion City Church in Atlanta, Georgia. Louie and his wife, Shelley, were caught on tape paying obeisance to Pope Francis “Mafia-style” by kissing him on both cheeks while asking for his blessing. 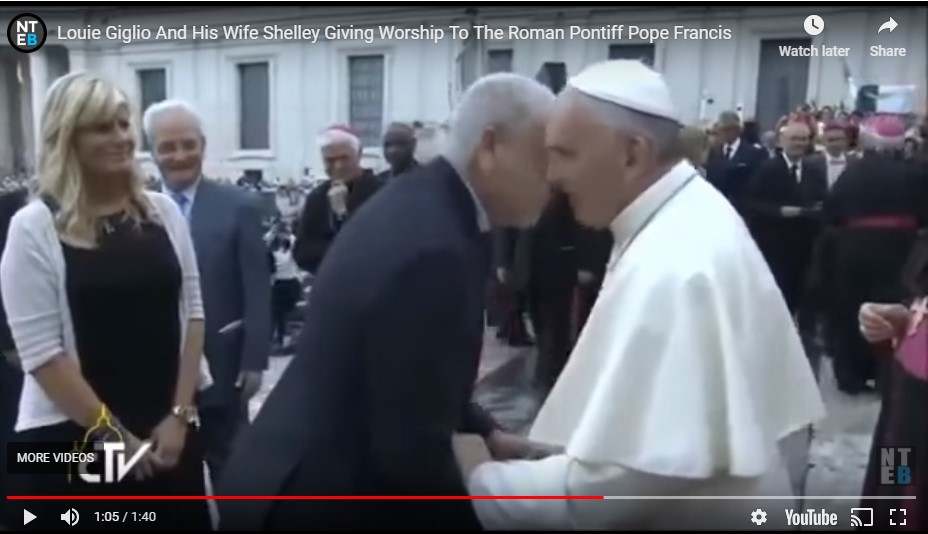 If you have seen the crime epic ‘The Godfather’ with Marlon Brando, then you know exactly what I am talking about. I have enjoyed some of Louie’s sermons in the past, like ‘Laminin‘, but now must warn fellow Bible beliebers that he has departed from the path.

“And have no fellowship with the unfruitful works of darkness, but rather reprove them.” Ephesians 5:11 (KJV)

Stay far, far away from this ecumenical junk, it is the doctrine of demons.

The Catholic Whore isn’t selling, she’s buying. And the price of admission will only cost your soul. If your church claims to be Christian and wants you to become involved with “uniting with Rome”, put on your track shoes and run away as far and as fast as you can go. Revelation 17 and 18 foretells the fate of the Roman Whore, and the whole mess gets burned to the ground as the entire world watches.

“And upon her forehead was a name written, MYSTERY, BABYLON THE GREAT, THE MOTHER OF HARLOTS AND ABOMINATIONS OF THE EARTH. And I saw the woman drunken with the blood of the saints, and with the blood of the martyrs of Jesus: and when I saw her, I wondered with great admiration.” Revelation 17:5,6 (KJV)

Beloved, although I was very eager to write to you about our common salvation, I found it necessary to write appealing to you to contend for the faith that was once for all delivered to the saints. For certain people have crept in unnoticed who long ago were designated for this condemnation, ungodly people, who pervert the grace of our God into sensuality and deny our only Master and Lord, Jesus Christ.  Jude 3-4

Regrettably, those “certain people” are no longer creeping in unnoticed.  For 50,000 millennials at the Passion conference, $209 could buy a ticket to see them.